In WA’s history of interracial marriage, pride and prejudice

The Supreme Court decision in Loving v. Virginia ended anti-miscegenation laws in the U.S. long after our state had done the same. But the history is complicated. 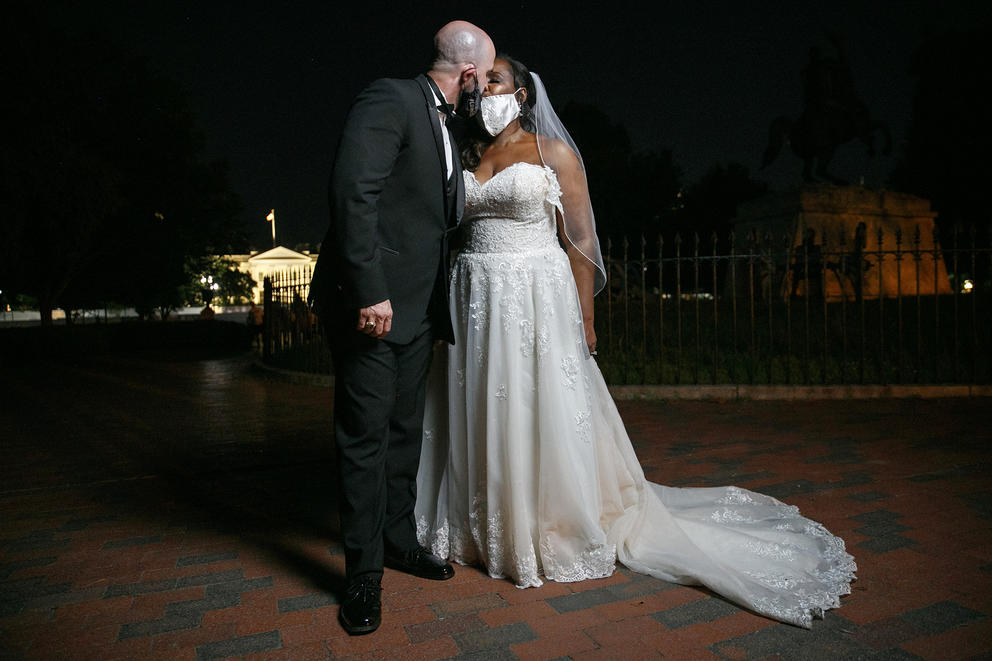 Newlyweds Corbett Leatherwood, left, of Manassas, Va., and Michele Davis, kiss during a photo session for their wedding photographer near the White House in Washington, D.C. on Friday, June 12, 2020, the 53rd anniversary of the Loving v. Virginia Supreme Court case which legalized interracial marriage in the United States. (Jacquelyn Martin/AP)

On paper, Washington’s ban on interracial marriage was short-lived. In 1855, when we were still a territory, the Legislature criminalized marriages between white people and anyone who “[was] possessed of one-fourth or more negro blood, or more than one-half Indian blood.”

Thirteen years later, in 1868, the territory rolled back the ban — almost a century before the momentous date of June 12, 1967, when the U.S. Supreme Court struck down the country’s remaining bans on interracial marriage in Loving v. Virginia.

Today, as we mark the 54th anniversary of that ruling — unofficially celebrated as Loving Day — it might be tempting to look back on the bullet points of that history and believe that Washington was at least relatively more forward-thinking than our neighbors. Oregon didn’t repeal its prohibition on interracial marriage until 1951, and Idaho’s ban remained on the books until 1959. California’s ban lasted until 1948, a lifetime after interracial marriage was technically legal this far north.

But if we take more than a cursory look at Washington’s past, it’s clear that our state was not some paragon of progressivism and, in fact, this particular issue bears uncomfortable — and powerful — lessons for our present moment.

“It wasn’t that Washingtonians were far more enlightened than the rest of the country — I think far from it,” Jason Gillmer, a law professor and the director of the Center for Civil and Human Rights at Gonzaga University, tells me when I ask him why our ban on interracial marriage was repealed so early, relatively speaking.

As Gillmer explained in a 2011 article for the Gonzaga Law Review, “the reason for the repeal had little to do with transformations in white attitudes toward intermarriage” and was instead more pragmatically and cynically motivated: In light of the 1866 Civil Rights Act and the then-new Fourteenth Amendment’s equal protection clause, the territorial Legislature saw the writing on the wall, decided the ban wouldn’t hold up in court and nixed it preemptively. Hardly an altruistic motivation.

At that point in American history, getting rid of a legal inequality wasn’t seen as an admission that everyone was equal in some contemporary progressive sense of the term; rather, as Gillmer notes, Washingtonians simply continued enforcing socially what used to be a more formal prohibition — and “their practices, policies and procedures were oftentimes just as brutal when it came to race as other parts of the country,” he says.

As detailed in Gillmer’s thorough review of this history — which I highly recommend reading for yourself — our state’s judicial system essentially “used the law to ensure that wealth and property remained in the hands of whites rather than racial minorities.” Lawmakers discouraged and punished the formation of interracial relationships by way of legal procedures and processes such as obtaining marriage licenses or establishing property ownership.

Washington’s newspaper editors continued decrying interracial marriage in sweeping broadsides and, as early as 1911, state lawmakers began introducing new bans. While the efforts never succeeded, the proposed bans were underscored by so much open prejudice that they were hardly necessary to make life nightmarish for interracial couples living in our state.

“We’re not exceptional, notwithstanding the fact that we didn’t have the ban,” says Gillmer. “It was still very difficult and very uncomfortable for interracial couples to live together and to hold themselves out publicly as being married.”

The lesson here is a recurring one that has modern-day relevance for Washingtonians: We are living in one of the most liberal states in the country. Seattle is one of the most progressive cities in the nation. We have strong nondiscrimination and thorough hate crime laws. Those facts, figures and rankings can sometimes provide the illusion of total inclusivity when, in fact, our formal protections need to be backed up with social acceptance to reach true equality. We are still far too close to our own history — and in many ways, our current reality — of segregation, white supremacy, Native American displacement and anti-Asian racism for many people of color to feel comfortable living here, much less live openly in interracial marriages.

Pew Research Center data from 2011 to 2015 — the most recent years available — show that 20% of newlyweds in the greater Seattle area are “intermarried” as compared with the national average of 16% for those same years. However, the vast majority of newlyweds in interracial marriages here across that period were white people or Asian Americans. In the space where the percentages of Black and Hispanic American newlyweds in interracial marriages should be shown, Pew simply displays a dash, indicating that there were “fewer than 200 cases” respectively in the area, Tacoma and Bellevue included.

None of this is to discount Washington’s rich history of civil rights advocacy to prevent interracial marriage bans from becoming law here in the 20th century. As the University of Washington’s Seattle Civil Rights and Labor History Project recounts, a coalition of civil rights activists and organizations, including Seattle Republican editor Horace Cayton, the NAACP and the Urban League united to defeat the interracial marriage bans that Washington lawmakers proposed in the 1930s. As a result, Washington did become a destination for lovebirds living in states where bans were still on the books.

“Interracial couples from California and other states would often travel to Vancouver, Washington, on the Oregon border, to marry and then return to their states of residence, which were legally required to recognize marriages that took place in other states,” Dr. Quintard Taylor, professor emeritus of history at the University of Washington and author of The Forging of a Black Community, tells me by email.

The coalition that made those marriages possible is a legacy to be proud of, and one we should be inspired to emulate as we address the many civil rights challenges facing Washingtonians today. But we can’t do that effectively unless we’re honest about our past. Back when Washington rolled back its interracial marriage ban, the territory “appeared more progressive” than it was, as Gillmer notes in his article — and the same is certainly true today.

“We need to confront this and stop pretending or acting like it’s worse elsewhere, therefore it’s not so bad here,” he tells me.

As is so often the case, the first step toward confronting our history is to know it.

by / December 30
Inside Crosscut