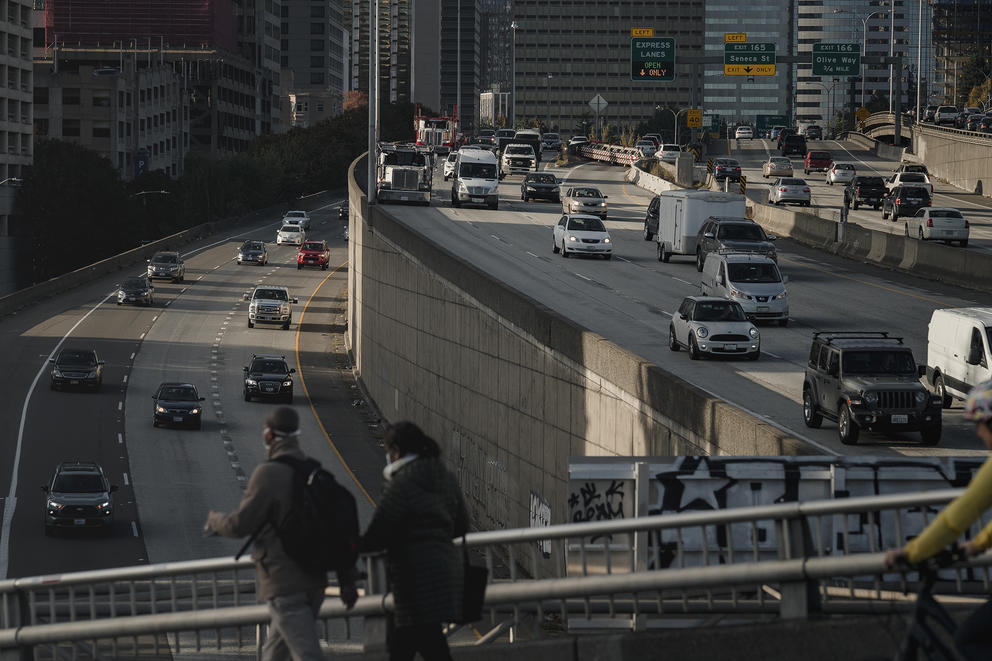 The northbound view of Interstate 5 on Oct. 15, 2020, in Seattle. (Jovelle Tamayo for Crosscut)

Seattle wasn’t built to stand the heat, and we can’t exactly get out of the kitchen.

In late June, only a few days before our area’s blistering spree of 100-degree days began, King County and the City of Seattle published the results of a heat mapping project, using data collected last July.

Perhaps unsurprisingly, the study found that “surface-level temperatures in areas with paved landscapes, less tree canopy, and industrial activity are substantially higher during summer heat events” — something many of us experienced firsthand a few days later, when parts of the city didn’t cool down enough, not even at night.

There’s a simple equation here, as climate journalist Eric Holthaus tells me: “The more pavement we have exposed, the hotter a city is going to get.”

And there is an equally obvious tract of uninterrupted pavement running right through what used to be trees, homes and neighborhoods: Interstate 5.

So if we’re looking for ways to mitigate the heat island effect and keep life a little more livable for the roughly 56% of us who don’t have A/C, it’s time to start talking — loudly, publicly and urgently — about mitigating I-5’s impact on our surface temperatures. The planet is getting hotter and our city, too, will have to adapt.

The climate crisis has added new urgency to a long-running conversation. In 2016, a movement to “Lid I-5” began taking more concrete shape and has since evolved into a broader vision for the future of the highway that earned its own feasibility study from the Office of Planning and Community Development in 2020.

The idea is ambitious but conceptually elegant: Take the section of I-5 that cuts through the center of Seattle like a deep swath and put a cover on it — a lid that can support parks, housing, bike, walking paths, you name it. Anything would be better than having a square mile of impervious road surface in what is already one of the warmest pockets of the city. Traffic would flow underneath; life would happen above.

While supporters of lidding I-5 have focused on the top-line benefits of reducing pollution and boosting the local economy, the project also has a benefit that sounds especially appealing after June’s deadly heat wave: keeping downtown cool.

According to last year’s feasibility study, “a lid could enhance the microclimate in downtown Seattle by modifying the cover over the 0.8 mile of road surfaces, pavements, and buildings that elevate localized air temperatures by three to four degrees as compared to the air in neighboring, less developed regions, or areas with increased vegetated cover.”

Scott Bonjukian, co-chair of the Lid I-5 steering committee, says that beyond the obvious benefit of “reducing the amount of impervious surface and concrete that’s exposed to the sun,” lidding I-5 could have other heat mitigating knock-on effects, like allowing the creation of housing that puts people closer to their jobs, thereby reducing air pollution.

“People in the area already don’t drive much but making the neighborhood more collectively enjoyable to be outside could help further reduce driving, which further reduces emissions,” Bonjukian says.

Ideally, though, altering the downtown stretch of I-5 wouldn’t just be about removing some of the surfaces that retain heat. It’d be about replacing them with ways to keep downtown Seattle cooler.

“It’s also a question of what you can’t do with the highway — you can’t build things like street trees and add to a street canopy,” Ben Crowther, of the Congress for New Urbanism’s Freeways Without Futures initiative, points out. (By the way, guess which local freeway was recently deemed “futureless”?)

Trees have a cooling effect on the surrounding area and you need only consult the heat mapping study I mentioned earlier for proof. North Seattle’s Greenwood retains a hell of a lot less heat than Georgetown, for example. And even just one tree, according to the U.S. Department of Agriculture’s Forest Service, can have the same net cooling effect as “10 room-size air conditioners operating 20 hours a day.” If we can’t get A/C into every Seattle home, the least we could do is get some more trees into a crucial urban corridor.

Of course, lidding I-5 isn’t the only way to reduce its heat impacts. (Crowther sees it as “a compromise that’s worth pursuing” but stops short of calling it the definitive solution.) For years, Doug Trumm, executive editor of The Urbanist, has proposed removing I-5 from the center of the city altogether. Trumm knows that doing so would require “a massive investment,” replacing the highway with rapid transit, safer streets, bike networks and affordable public transit. But he tells me that the “payoff would be enormous” in its impact on our city’s carbon emissions. (And if that’s “too drastic,” Trumm agrees that we should “lid as many sections as possible.”)

Besides, as Trumm points out, our existing infrastructure will continue to struggle in a hotter Seattle, as the road buckling that occurred last week across various stretches of I-5 and other roadways demonstrated.

“It’s clear in a hotter Cascadia that our highways will be even more brittle than they are now and break down frequently as events like our recent heat dome become more common,” he tells me.

I asked the Washington State Department of Transportation about the infrastructure problems facing I-5 in a warming world. Spokesperson Kris Rietmann Abrudan told me, “It is important to note that WSDOT infrastructure is designed for high temperatures.” She added, “What we experienced last week was unique in that those temperatures were sustained with little cooling in the evening.”

She highlighted the wide range of work WSDOT is doing to address climate threats, all the way down to the level of testing “various pavement mixes and structural materials to withstand the forces of water, wind and temperature.” But still, the agency faces steep financial challenges going forward.

“In Washington, our agency is only funded for about half of what we need to keep our infrastructure in a state of good repair, and the deficit increases each year,” she added.

It’s clear the challenges facing the city are enormous if 105-degree days become a routine fixture of our summers. Lidding I-5 wouldn’t suddenly turn Seattle into a temperate oasis in July. But as we start looking at, and mustering the political willpower, for the kind of demanding projects we’ll need to keep Seattle livable into the 21st century, there’s a big, car-filled stretch of exposed pavement staring us right in the face.

We might not be able to get out of a kitchen that’s only getting hotter, but we can at least remodel.

In Vancouver’s quest to be the ‘greenest city,’ a cautionary tale

Ten years after its leaders embarked on this effort, the Canadian city still has a long way to go.

The future of the business may depend on how apple growers and cider-makers start adapting now to conditions they can’t anticipate.