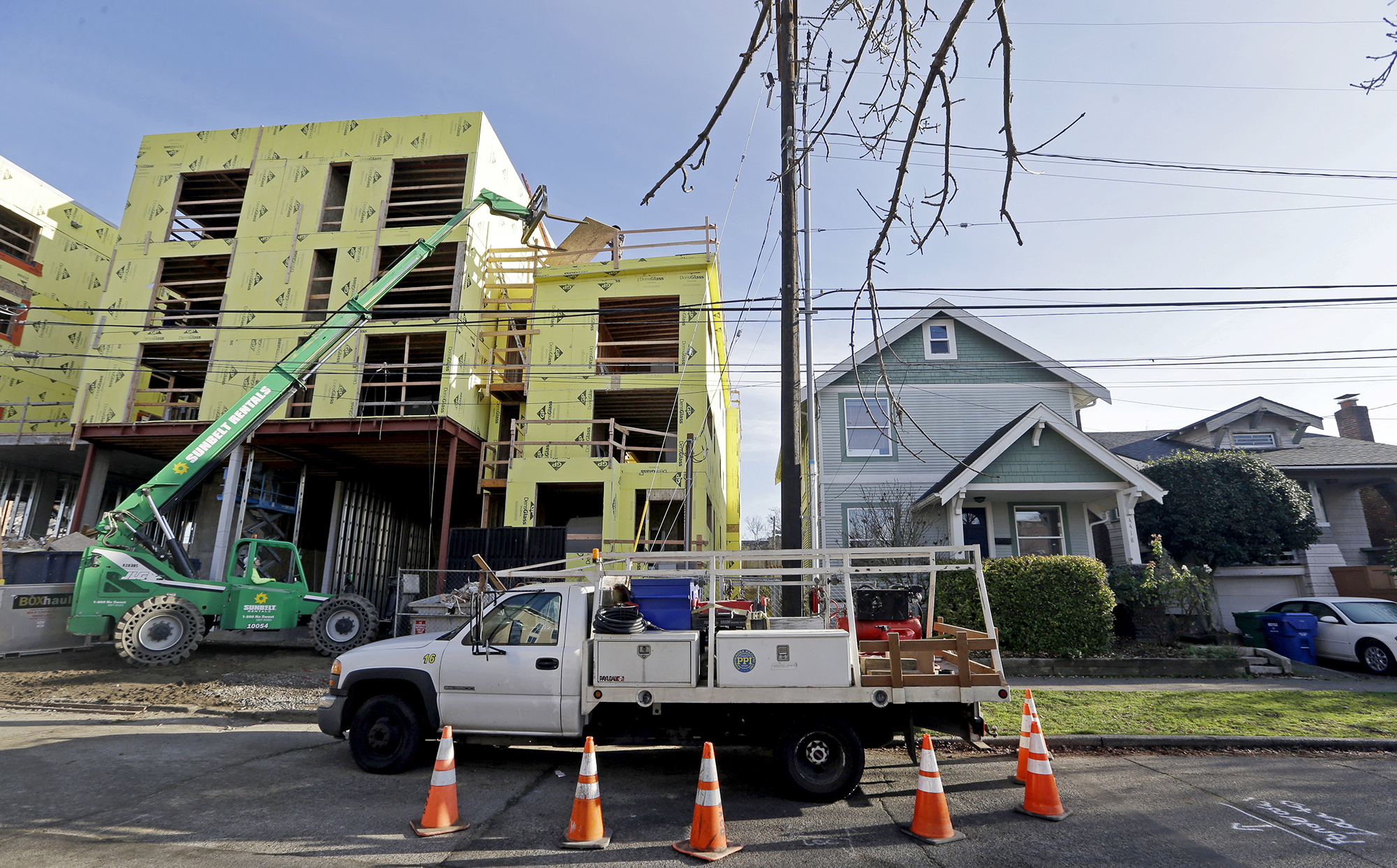 In this Dec. 13, 2017 file photo, a four-story mixed-use building is under construction adjacent to an older, single-family home in Seattle. (AP Photo/Elaine Thompson)

There’s little doubt that homelessness is the top issue on Seattle voters’ minds this year. But behind the homelessness crisis lies the housing crisis. Until we succeed in dramatically expanding the supply of affordable housing, progress on the city’s long-running humanitarian emergency will remain elusive.

In my last few columns, I examined another side of the housing crisis: evictions and the political battles that arise over laws intended to protect renters, with a special focus on the “mom and pop” landlords who feature prominently in these debates. If we care about affordable rental housing, the argument goes, we should heed the small landlords who provide some of that housing and take care not to give them reasons to sell their single-family rental properties. I questioned the notion that maintaining a class of mom and pop landlords should be a policy goal, suggesting that there are better ways to ensure an ample supply of affordable homes.

Here, then, are the two big things Seattle’s next mayor needs to do to solve the housing crisis.

It’s been a few years since Seattle had a major debate about zoning reform. In 2019, after extensive public process, the city passed Mandatory Housing Affordability legislation that opened up select areas, designated “urban villages,” to larger buildings and required developers to include some below-market-rent units on site or pay into a fund for affordable housing elsewhere. (The program aims to produce 6,000 affordable homes over 10 years, and appears to be more or less on track.) But that change still left the vast bulk of Seattle’s single-family neighborhoods — accounting for over 80% of residential land — unscathed.

Since then, many progressives have gained a deeper appreciation of how serious a problem it is that huge swaths of the city are increasingly reserved for wealthy people with cars. They’ve learned about the racially exclusionary history of single-family zoning. They’ve seen how concentrating development in poorer communities causes gentrification and displacement. They’ve connected the dots between the climate crisis and land use patterns that force workers into long, polluting commutes because there isn’t enough housing near growing urban job centers. They’ve flipped the script, replacing the ominous-sounding “abolish single-family neighborhoods” with calls to end “exclusionary zoning” and “apartment bans.”

This soul-searching has been a national affair. Already, Minneapolis and Portland have acted to allow modest multifamily developments in all residential areas. President Joe Biden has taken up the cause.

Now the Seattle City Council is taking a first small step, contemplating swapping out “single family” for “neighborhood residential” — a name change that’s meant to reflect both the reality that many neighborhoods already contain apartments and small businesses that predated restrictive zoning laws and the aspiration to change those laws in the near future.

Will Seattle enact sweeping reforms to allow more housing types and greater density in all neighborhoods, or will not much change? A lot depends on our next mayor. Four of the five leading candidates — Colleen Echohawk, Jessyn Farrell, Lorena González and Andrew Grant Houston — told The Seattle Times that “the city should allow more housing on every block, beyond the current allowances for accessory units.” Polling frontrunner Bruce Harrell disagrees, favoring more “sensitively targeted development.”

For many listeners, that’s code for: Don’t worry, I am not coming for your wealthy enclave. This appears to be a major reason The Seattle Times editorial board chose to endorse Harrell over Farrell. (The board has long opposed zoning reform — just in case you needed evidence that its sudden and recently expressed concern for the rental housing supply, supposedly threatened by renter protection laws, was opportunism pure and simple.)

Encouraging private development of far more housing is part of the answer to Seattle’s housing crisis, but it’s nowhere near enough. That new housing will target higher-income renters and people who can afford to purchase a home. It will relieve pressure on the housing market as Seattle’s population continues to grow, but it won’t directly trickle down in the form of significantly lower rents or housing that’s affordable to the nontech crowd, let alone low-income families and people exiting homelessness. While opening up space to the market with one hand, Seattle’s next mayor needs to start more aggressively taking it away with the other.

Take land and housing off the market

The best way to make housing a human right is to massively expand the city’s stock of permanently affordable housing that exists outside the speculative market. In cities like Vienna, where “social housing” makes up a large portion of the overall housing stock, private sector rents stay relatively low, too, because landlords have to compete with the public option.

Right now, Seattle’s nonmarket housing comprises mostly income-restricted rental units operated by housing nonprofits or the Seattle Housing Authority. There’s also the city’s equitable development initiative, which has supported a number of projects that combine housing with a cultural center or other amenities significant to the community driving the project. And there are community land trusts like Homestead, which aims to make home ownership more affordable by removing the cost of the land and preventing speculation.

All of this is a good start, but with less than 10% of Seattle’s housing stock in public, nonprofit or community hands, a mayor serious about this shift has their work cut out for them. How to scale up fast? How to not only make better use of public land, but also claw more land away from the private market when it’s so wildly expensive? How to make sure there are enough affordable three-plus-bedroom homes for larger families, which the federal low-income housing tax credit program won’t fund? How to act fast enough and in a targeted manner to stop and reverse the continuing displacement of Black and brown communities? And, of course, how to pay for it all?

Do the leading mayoral candidates have answers to questions like these? Do they even care about turning Seattle into the Vienna of the West Coast? I’ll ask them and report back next week.

I think there’s reason to hope that Seattle can make strides on both fronts, rezoning to allow much more market-rate housing and massively expanding nonmarket affordable housing. These two projects sound a little contradictory, and in some cities, notably San Francisco, the factions fighting for them tend to work at cross-purposes. Here in Seattle, though, more of an urbanist-left alliance has emerged that recognizes the necessity of both, and is ready for the hard work of pairing zoning reform with anti-displacement measures and fighting for progressive funding to build permanently affordable housing at scale. A majority of the city council appears to be ready, too. All this will be much easier if Seattle voters elect a mayor they can work with.