In the PNW, Confederate flag controversies are not new

Recent incidents in the region and a secession movement in Oregon show the Civil War era and its divisions still echo in the Northwest. 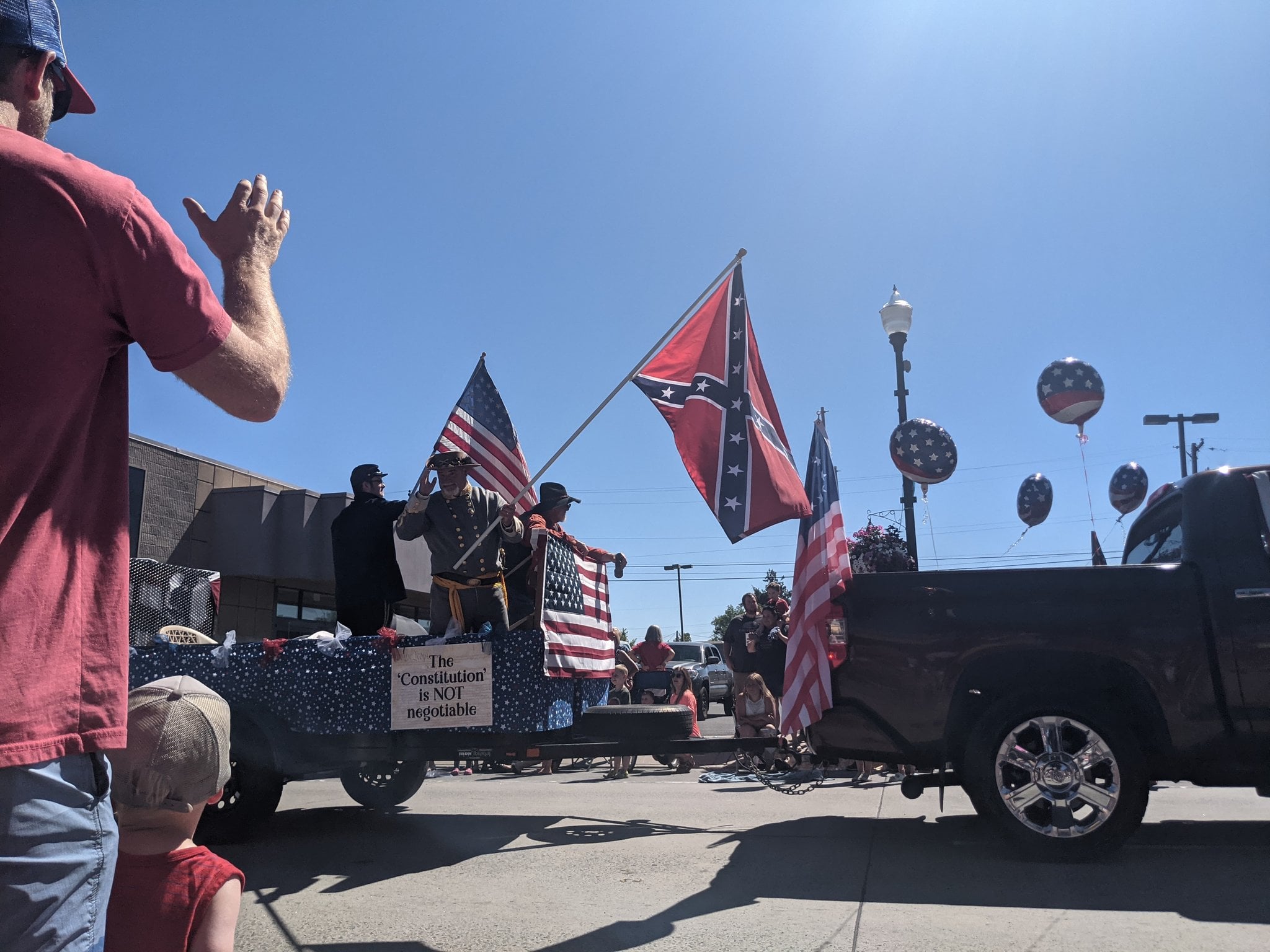 A Confederate flag is displayed on a float during this year's 4th of July parade in Redmond, Oregon. (Adam Duquette)

There’s a resurgent controversy in the Pacific Northwest over Confederate flags. Central Oregon is a hot spot.

This month, in Redmond, Oregon, a Fourth of July float was sponsored by a far-right group, People’s Rights of Oregon, founded by Ammon Bundy. He gained notoriety from the takeover of Oregon’s Malheur National Wildlife Refuge, in 2014, and is currently running for governor of Idaho. The float featured men in Civil War uniforms, one dressed as Confederate general, and flew a Confederate battle flag prominently along with the American flag. The creators of the float insisted they were simply reflecting history, but many spectators were outraged and demanded to know why a symbol of treason and slavery was permitted in the parade. The Redmond Chamber of Commerce, which organized the day's event, is looking into the matter.

In June, Oregon Public Broadcasting reported on the proliferation of Confederate flags in the town of Prineville, not far from Redmond. Central Oregon is seeing a spike in real estate prices as urban refugees and retirees seek affordable housing and are priced out of places like booming Bend. A general discontent in rural Oregon has some of Oregon’s counties expressing support for seceding from the state, and joining up with another one nearby, to create what activists call "Greater Idaho." “Let us part in peace,” says one of the movement’s organizers. Such words carry an implication that nonsecession might lead to something less than peaceful.

Sympathy for the Confederacy is not new to the region, nor are flag controversies, which date back to the beginning of the Civil War itself. As early as 1861, Union and Confederate sympathizers clashed over flags. In Jacksonville, Oregon, attempts to tear down the American flag were made on Independence Day, 1861, by a “drunken rabble of rebel sympathizers,” as recounted in Jeff LaLande’s article, “Little Dixie of the Pacific Northwest: Southern Oregon’s Civil War,” in the Oregon Historical Quarterly. The Oregon Statesman, a Republican paper in the 1860s, called the state’s Southern sympathizers “the most corrupt, mercenary, and unprincipled set of hacks that ever dabbled in our local politics.”

In the 1860s, both the American and Confederate flags became charged symbols of the political and racial divisions splitting the country. The tensions continued during the war and after, as settlers from the South surged into Idaho and Oregon and opposition to Reconstruction spread on the West Coast. As scholars have recently argued, the politics of the West were largely an extension of those in the South.

One early flag controversy threatened to create an international incident in an already hotly contested part of the region, the border between the U.S. and British colonies in what is now Canada.

On Nov. 10, 1862, the city of Victoria, then part of the British colony of Vancouver Island, held a celebration honoring HRH Prince of Wales (later King Edward VII) coming into his majority (that is, he was officially an adult). A parade was held, with music, cannon salutes from British navy warships, a banquet, horse races and many toasts.

On that morning, flags of many nations were raised on poles and the masts of ships in honor of the day. A man identified as Mr. Shaphard (or Shepherd), described as a “gentleman bootblack,” raised the Confederate national flag — the Stars and Bars — on the parade route in Victoria at 7 that morning. A crowd of some 300 people gathered to protest the flag. Fearing a riot, policemen were sent to prevent violence.

When the presence of the flag was made widely known, Americans in town hauled down their Stars and Stripes in protest. They would not share a salute to the Prince of Wales alongside the Southern renegades. The American consul in Victoria, Allen Francis, wrote to the colonial governor, James Douglas, letting him know why the American flags were being withdrawn. The Confederacy represented states in rebellion, he argued, not a sovereign nation.

The view in Victoria was this: Because Britain was neutral regarding America’s Civil War, it had no authority over who flew what flag. Shaphard took the flag down “of his own volition” at 1 p.m. and American flags were again raised. Still, the British felt dishonored and American outrage lingered.

In Washington Territory, newspapers sympathetic to the Union cause called the affair an “insult” to the American government and a challenge to U.S.-British relations. The Oregonian objected to the hoisting of a “secesh flag” and said that the deployment of police in Victoria wasn’t to prevent a riot, but to “protect the traitor and his treasonable rag.”

The view of Victoria’s Daily Colonist newspaper, however, was that the Americans were far too delicate: “In the present disturbed condition of the United States, the loyal citizens of the republic abroad are unusually sensitive. We candidly believe them to be far too sensitive for citizens of a great nation. They carry many national feelings to an extreme that neither elevates the American character … nor promotes that unrestrained intercourse in social and commercial matters which ought to exist.” In other words, the Union supporters were “snowflakes” practicing “cancel culture.”

If the loyal Americans in the region were nervous, it was not without some reason. Southern sympathizers promoted a secession movement to create a slave-friendly Pacific Republic in the West. And at the time, Democrats supportive of the South were in charge of Washington Territory’s legislative assembly. Earlier in 1861, both houses in Olympia defeated by a 2-1 margin resolutions supporting the Union cause. Their argument? The war was primarily an abolitionist effort. This was perhaps an unsurprising position from a Legislature that, a few years earlier, had voted to support the U.S. Supreme Court’s Dred Scott decision, which stripped Black Americans of citizenship and upheld slavery.

At the same time, border tensions between Washington and Vancouver Island had flared. British and Americans had jointly occupied San Juan Island since 1859 in a dispute over a British dead pig, which had nearly brought the two countries to war. Talk about sensitive! And the British did provide material help to the Confederacy by, among other things, allowing its fleet to port in Liverpool. That included vessels like the Shenandoah, which at the end of the war raided and destroyed much of the Pacific whaling fleet off Siberia and Alaska. William Henry Seward attempted to get Britain to give British Columbia to the U.S. for war reparations, but did not succeed.

The Victoria flag flap was a minor event, but 160 years later the “disturbed condition” of the United State has reignited. The battlefields include debates over history and the meaning of its symbols, Confederate and colonial monuments in the public square, the teaching of history, the responsibility for genocides and reparations, insurrection, fair or suppressed elections, and the banners under which we stand.

A few years ago, Americans argued about the meaning of the U.S. flag as athletes kneeled during the national anthem. Now a raging debate again asks whether the American flag can co-exist with the Confederate flag. There are those who would like to conflate the two, to see them as one and the same. It is true they are both part of our history. In the 1860s it was clear they stood for opposing values on nationhood and inclusion. They still do.