Air conditioning is rare in Seattle, but if we want to breathe indoors amid hotter, smokier summers, we’ll have to take action — soon. 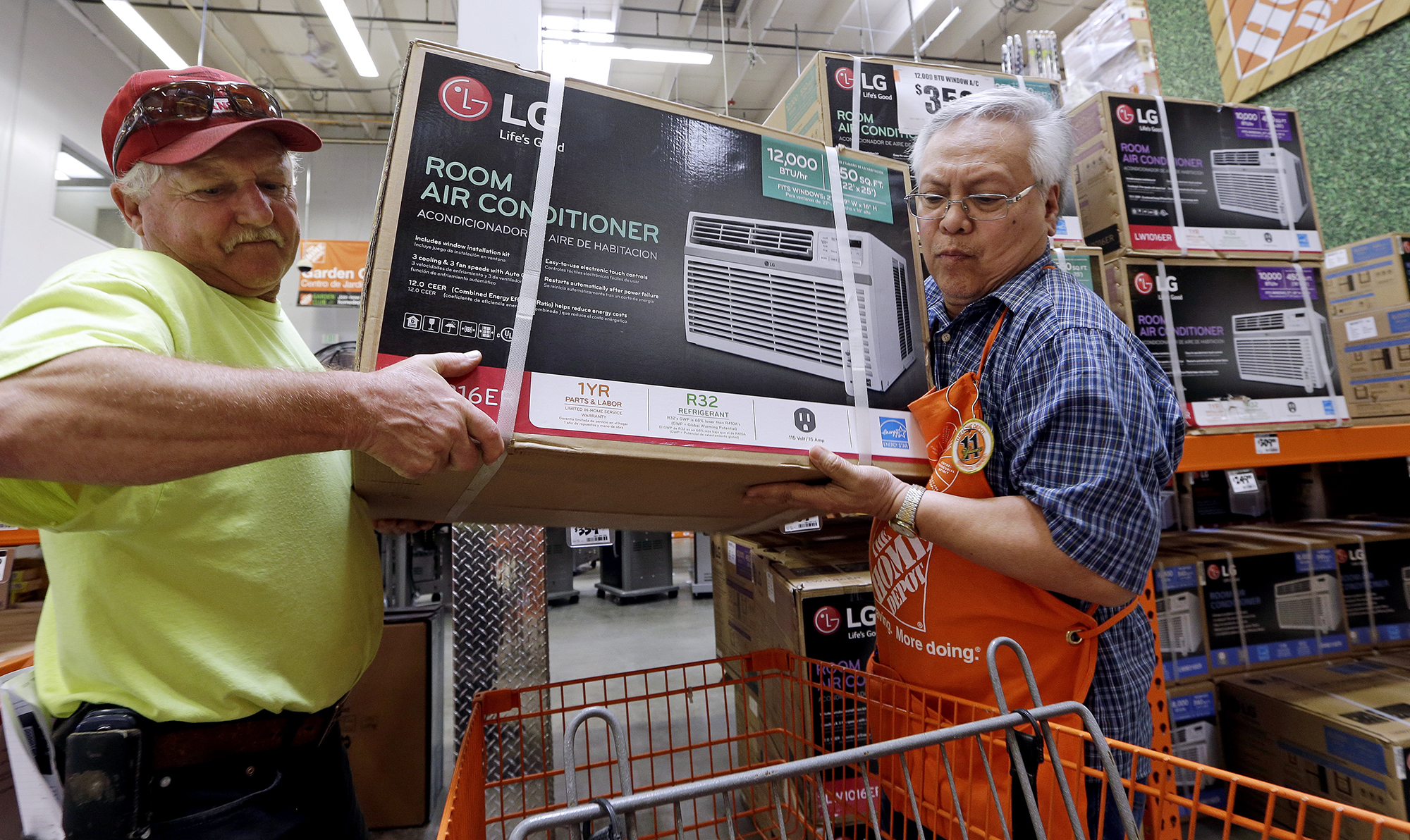 FILE - In this Aug. 1, 2017, file photo, store greeter Danny Olivar, right, lends a hand to a customer, who declined to be identified, to heft an air conditioning unit from a rapidly declining stock at a Home Depot store ahead of an expected heat wave in Seattle. The Home Depot Inc. reports earnings Tuesday, May 15, 2018. (AP Photo/Elaine Thompson, File)

How will Seattle breathe in the future? Between the wildfire smoke of 2020, the heat wave of 2021 and the very real possibility that both events could happen simultaneously in the future, it’s clear we’re facing an indoor air crisis — one for which we’re not prepared.

In late June, as we dealt with the sweltering heat, national media seized on the statistic that only 44% of homes in the greater Seattle area have air conditioners. But modern HVAC systems aren’t just about keeping indoor air cool, they also help filter out pollution and, in some cases, wildfire smoke.

But for most of us, the air we breathe comes in through our windows — and that will prove challenging as the world on the other side of the glass gets warmer and smokier.

“There really is an infrastructure gap … and [we’re] trying to find ways to reduce the pollution in our indoor environments,” Addison Houston, the mitigation and response planner for the environmental health services division of Public Health — Seattle & King County, tells me.

So far, our collective response to the twin threats of heat and wildfire smoke has felt relatively ad hoc. When the outdoor air becomes unbreathable, we make a mob rush on air purifiers, air conditioning units and even local hotels. King County and the city of Seattle open up air and cooling shelters for people who cannot weather the situation at home and for those experiencing homelessness — but hours at many locations are limited, and they’re far from a systemic solution.

“Certainly clean air shelters are good for people who can't do things in their own homes — [or] going to the library for a few hours, or whatever,” Dr. Dan Jaffe tells me. He is a professor of environmental chemistry at the University of Washington Bothell and a world-renowned expert on air pollution. “But in the long run, people need to think about their own homes and their own spaces.”

Concretely, here’s what that means for Jaffe, who definitely knows what he’s talking about: He is going to avoid getting air conditioning, in part to reduce his environmental impact — and because he can effectively use fans to cool his home at night. But if you’re older or have an underlying health condition — or if you simply cannot cool your home at night as average temperatures climb — you should feel no guilt about installing an HVAC system if you can. (As Jaffe notes, “personal actions are a pretty small part of the puzzle” when it comes to the climate crisis.)

But for those of us who don’t exactly have remodeling money in the bank, there’s a simple step that you can take: tape a MERV-13 filter to a box fan and you’ve just built yourself a powerful air cleaning system for about $30 — much less than the cost of a fancy air purifier. (Jaffe has even made an easy-to-follow video tutorial to help you assemble it.)

“I’m concerned,” Jaffe says of the future of our indoor air quality, “but I think you can mitigate that by thinking it through and being prepared.”

Critical going forward will be ensuring that everyone, especially people who are already more likely to live in warmer and more polluted parts of South King County, have access not only to the materials to make their own filters, but to information about why it’s so important to maintain good indoor air quality. At least 78 Washingtonians died from the heat this year, and an estimated 200 likely passed away due to 2020’s smoke.

Tweetie Fatuesi, a program manager for Utopia Washington, tells me that she helped distribute 80 box fan filter kits earlier this year, handing out 20 at a June vaccination clinic, then 60 at Taking B(l)ack Pride nearer the end of the month.

“To be able to have some type of resource where folks can not only filter the air quality in their homes, but have an added layer of protection of staying cool during those heat waves has been really helpful to the communities that we serve,” she says.

Still, the kits were few, so Fatuesi also collaborated on a video public service announcement telling people how they could make their own box fan filter, tailoring it to the needs of her community.

Khan Ho, who oversees community engagement in the environmental health services division of Public Health — Seattle & King County, says that this kind of outreach can have ripple effects. Even if actual supplies are limited — and they are — the knowledge still spreads.

“Many people, before they were connected to our community partners, didn’t know about indoor air quality as a concern or an issue at all,” she tells me. “But now that they’re creating that awareness, they’re sharing that information on to others in their community networks. Even if we don’t have enough box fan filter kits to go around, they’re building that skill.”

But not having enough box fan filter kits is indeed a problem. As Houston points out, much of Public Health’s current work in this area has happened because they were “able to leverage funding we’ve received for COVID response efforts” to address indoor air quality. The same strategies that reduce viral transmission indoors also work on wildfire smoke particulates. Without “a reliable funding source to sustain this work,” Houston says, we’ll just be putting “a Band-Aid on an issue that is far bigger.”

That means the future will require creativity, funding and a systemic overhaul of the air we breathe. The commonly used MERV-11 filters will have to be swapped out for the less common MERV-13 filters, which are more effective at filtering out smoke particles. People living without HVAC will have to assemble their own filtration systems, MacGyver-style. We’ll have to increase our political will around the issue, too, because handing out a relatively small number of box fan filter kits isn’t going to cut it. And we’ll have to make fallback measures more robust, to protect those in the most vulnerable positions.

Brendan McCluskey, director of King County Emergency Management, tells me that “another critical thing we need to be considering in the future” is to “offer the cooling center services overnight so that people can get that break that they need.” Not just at a handful of locations, but at many of them.

In the meantime, as we face down that future, McCluskey’s advice is this: “Get a kit, make a plan and stay informed.” Buy a box fan, keep some filters on hand, monitor the air quality — and breathe easy.