The company’s newest foray into brick-and-mortar grocery retail may be the most consequential yet. What is the e-commerce giant up to? 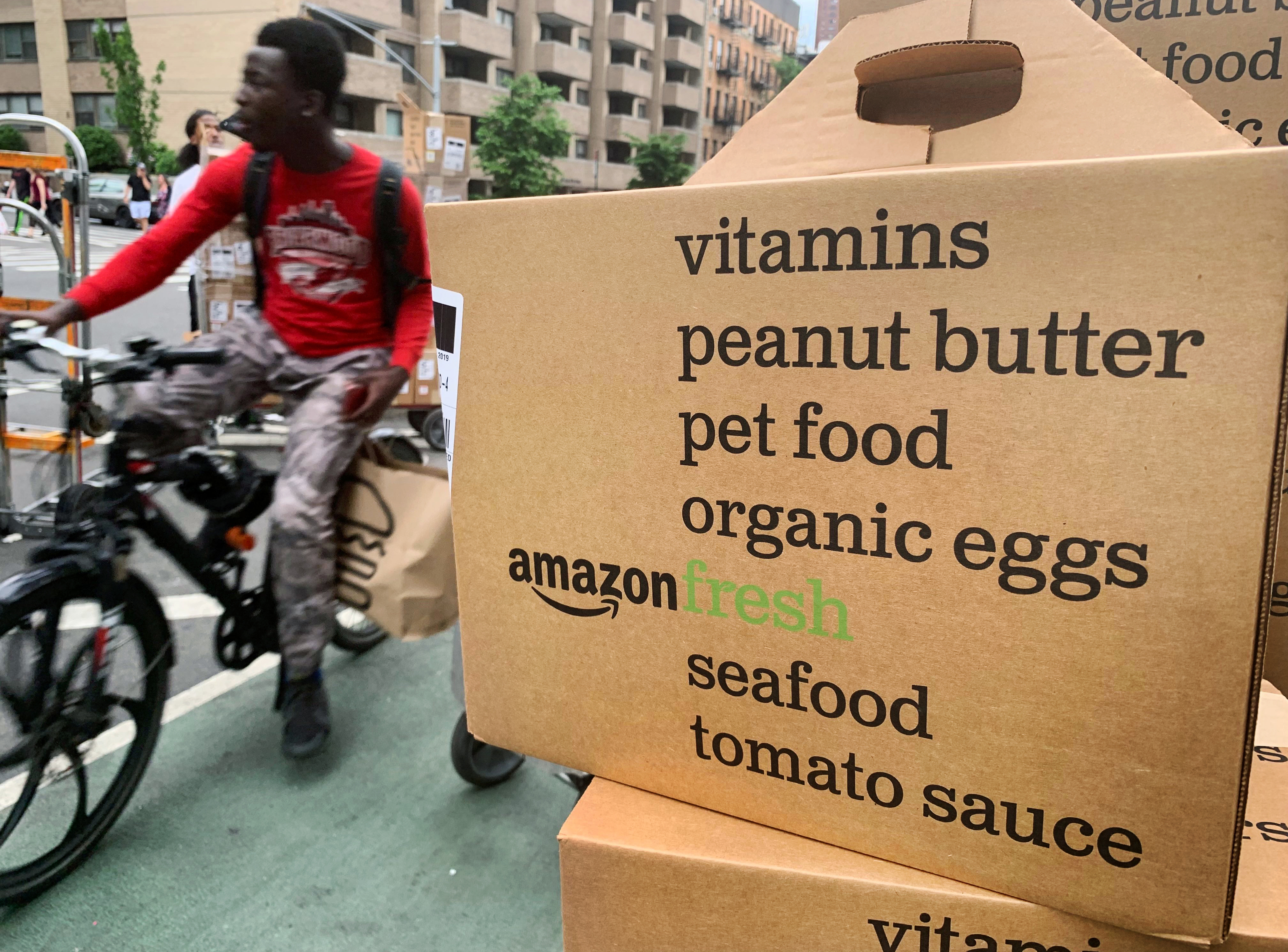 In this June 16, 2019, photo, a bike messenger rides past boxes of Amazon Fresh deliveries in New York. (Jenny Kane/AP)

A new full-sized Amazon grocery store finally opened its doors in Seattle’s Central District today, seven months after plans were first announced. It’s called Amazon Fresh, and the first one opened last September in Woodland Hills, California. Since then, seven more have popped up in California, four in Illinois, and one each in Pennsylvania, Virginia and Washington, D.C. Paired with an Amazon Fresh store that opened in Bellevue in June, the 23rd and Jackson store, formerly a Red Apple, brings this new concept to Washington state. What does this mean for Seattle and the future of the grocery industry?

Amazon has been experimenting in grocery for well over a decade. In 2007, after first dipping its toes into delivering nonperishable foods, Amazon launched a home grocery delivery pilot for the affluent residents of Mercer Island, also branded AmazonFresh. Over six years this service expanded through the Seattle area, and then to several California cities. As of late 2019, it was available in 19 U.S. cities; now, an Amazon spokesperson says it’s available in most major metropolitan areas and a handful of overseas markets. That’s extremely slow going, in Amazon terms. It turns out that delivering fresh food to your door, quickly and cheaply, isn’t easy.

Perhaps for this reason, Amazon dove into the world of brick-and-mortar grocery, acquiring Whole Foods in 2017. Amazon made some changes to the chain, introducing discounts for Prime members, squeezing more labor out of workers and phasing out a partnership with Instacart in favor of Amazon’s own online ordering and delivery service. But it’s hardly been a revolution. Whole Foods may have been, above all else, Amazon’s way of learning the industry.

The truly Amazonified shopping experience arrived in January 2018. That’s when the first Amazon Go convenience store, located in the company’s Day 1 building in South Lake Union, opened to the public. Walk in, walk out, no need to check out — a dense array of ceiling cameras and sensors tracks your every move, cataloguing the items you select. A smartphone app automatically debits your account. (Under pressure, Amazon later introduced a cash payment option.) Two years later, an Amazon Go Grocery opened on Capitol Hill. Same concept but bigger, a real grocery store, though not as large as your average Safeway or QFC. (Amazon has since abandoned the Amazon Go Grocery concept, rebranding the Capitol Hill location Amazon Fresh.)

But Amazon’s newest foray into grocery may be the most consequential yet. Rather than catering to well-off, health-conscious liberals or the high-tech crowd, Amazon Fresh is a store for the everyshopper. What exactly is Amazon up to?

In part, Amazon is angling to compete in the brick-and-mortar grocery mass market now dominated by chains like Kroger, Albertsons and Walmart. By offering a more or less conventional shopping experience, Amazon can edge out rivals while weaving the web that binds customers to Amazon: in-store package pickup and returns, Alexa’s assistance navigating the aisles, and product suggestions and coupons personalized using Amazon’s ever-expanding reams of data on who you are and what you want. In this game, Amazon enjoys another decisive advantage: extremely deep pockets. In an industry with notoriously slim margins, Amazon can undersell to its heart’s content.

Amazon Fresh stores may, counterintuitively, also be about bringing Amazon’s online grocery shopping business to the next level. Across the entire grocery industry, the COVID-19 pandemic accelerated a shift to online ordering for pickup or delivery. Companies have experimented with a number of models. There are paid shoppers, whether employed in-house or contracted through the likes of Instacart. There are “dark stores,” which are not open to the public at all. There are “microfulfillment centers,” sometimes housed in the back of a functioning grocery store, and there are vast, automated warehouses. In this game, Amazon is in some respects at a disadvantage, lacking the physical infrastructure in dense urban areas that the major grocery chains already enjoy. Amazon Fresh stores, then, will become bases from which Amazon can improve and expand its online shopping business, even as it also caters to in-person shoppers.

Finally, Amazon Fresh is a laboratory for piloting and spreading new technologies that could eventually cement Amazon’s dominance in the grocery industry. At most stores, Amazon Fresh shoppers have the option to use a smart “Amazon Dash” cart, which uses cameras, sensors and a scale to effectively perform self-checkout during shopping. (It also, presumably, tracks a customer’s path through the store, collecting valuable data.)

But Amazon isn’t stopping with smart carts. The recently opened Bellevue store features the cashierless “Just Walk Out” technology pioneered at Amazon Go, its first use in a full-sized store. In April, The Seattle Times reported that a Ballard location with this technology also appears to be in the works. Amazon can now introduce technologies like these in an otherwise normal, mass market grocery store, letting customers ease gradually into their use.

One of the fun things about having basically unlimited resources is that you can afford to try and fail a lot. If Amazon decides to blaze a trail, or two, or a dozen, the rest of the grocery industry will have to scramble to adjust. The cost-conscious consumer may stand to gain in the coming era of cutthroat competition. But there will be losers, too. Amazon’s newest expansion into the grocery industry will reverberate throughout the food supply chain, with profound consequences for workers and communities. Labor unions, community organizers, elected officials and all of us will have to figure out how to respond.


Correction: An earlier version of this column claimed incorrectly that AmazonFresh, the company's grocery delivery service, operates in 18 U.S. cities. We have corrected the column to clarify that the service operates in most major U.S. metropolitan areas.