Three decades ago, prominent political figures in Oregon and Washington faced allegations similar to those that have led to Andrew Cuomo's downfall. 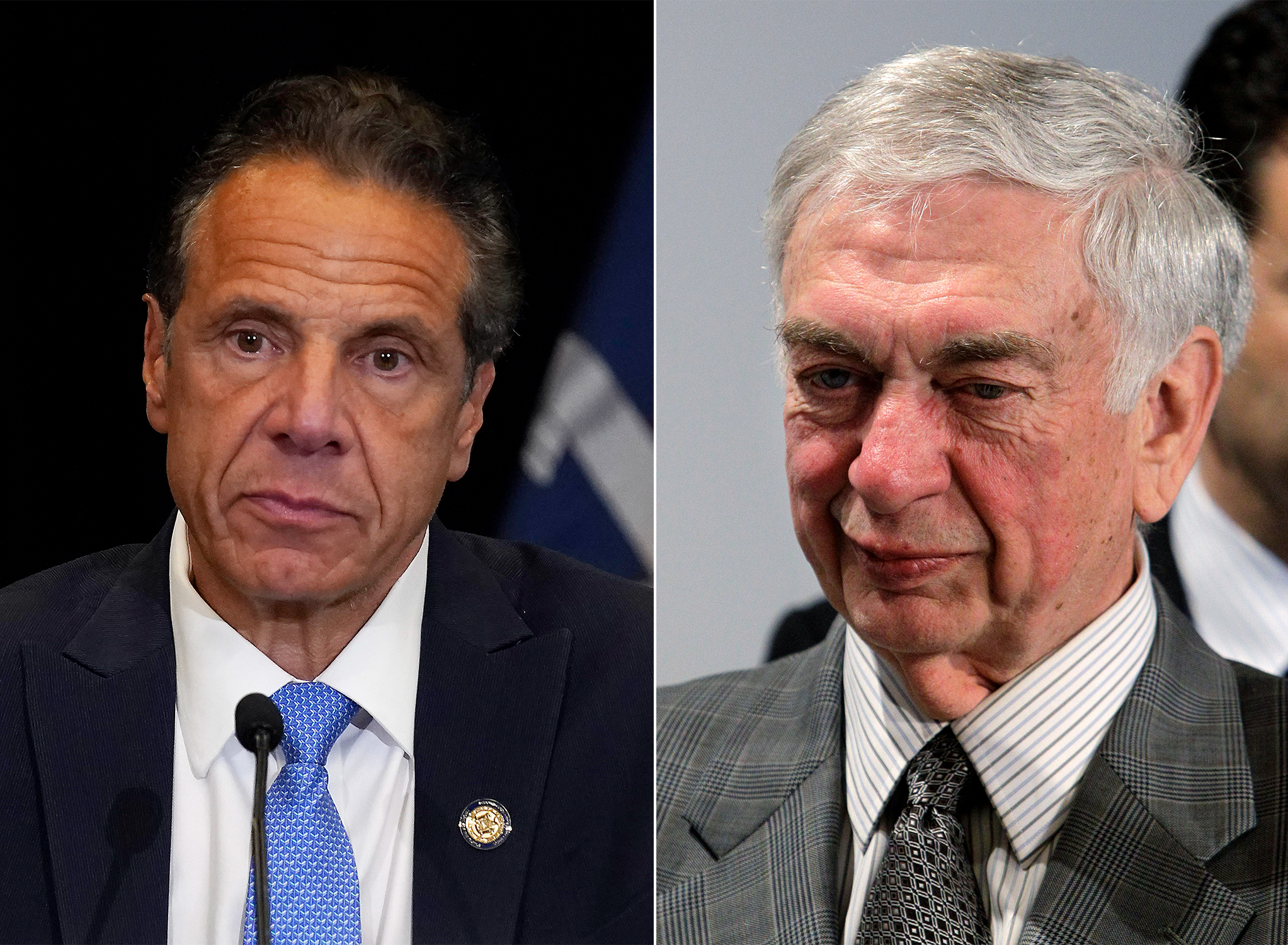 On Tuesday, in the wake of allegations of harassment from 11 women and an investigation into his behavior, New York Gov. Andrew Cuomo announced his resignation. Charges could still be filed.

The saga calls to mind another scandal, one that rocked our corner of the country in the mid-1990s. Then the Pacific Northwest was a center of sexual harassment and assault allegations against prominent political figures, including Mike Lowry, who was Washington’s governor at the time, and Sen. Bob Packwood of Oregon.

Lowry was a former Democratic congressman and a progressive icon. Raised on an eastern Washington farm and instilled with New Deal values, he promoted health care and gay rights, was a leader on the environment, and wasn’t afraid to raise the issue of tax increases. Progressives loved him, and conservatives had grudging respect for his adherence to liberal principles. But they mocked him for his looks: In a run for U.S. Senate, they noted how much Lowry resembled Yasser Arafat. Lowry lost that race.

His election to the governor’s office in 1992 felt like a kind of vindication for the left wing of the Democratic Party, an antidote to both Gov. Dixy Lee Ray, who was elected as a Democrat but ruled as a prickly conservative, and Booth Gardner, a pro-business centrist whose agenda often seemed mired between liberal and conservatives in the Legislature.

During his tenure, Lowry floundered a bit. He got off to a rocky start by looking to raise taxes right after his election while having promised, during his campaign, to do so only “as a last resort.” Often impulsive, he also seemed ill-suited to managing Olympia. Dave Ammons, a longtime Associated Press reporter, now retired, and former dean of the Capitol press corps, says that Lowry “was just awkward,” a “horrible fit” in Olympia.

But Lowry’s behavior also had a dark side. In 1994, a state patrol staffer complained that when she came to the Capitol to fingerprint Lowry, he rubbed up against her in an inappropriate way. Then a member of his communications team, a young woman named Susanne Albright, alleged that the governor had sexually harassed her — groping, grabbing and unwanted hugging. Albright had admired Lowry, but his behavior increasingly impacted her.

I was an editor at Seattle Weekly at the time and was put in charge of our coverage of the Lowry scandal. The allegations against him fell within the timeline of Bill Clinton and Monica Lewinsky. Regionally, it was on the heels of accusations that popular Washington Democratic U.S. Sen. Brock Adams — a former member of Jimmy Carter’s cabinet — had drugged, assaulted and raped a number of women. He dropped his bid for reelection in 1992.

There was also the case of Bob Packwood, the moderate pro-choice Republican U.S. senator of Oregon, who was accused of sexually assaulting women, including staffers. He was accused of attempting to expunge incriminating details about his acts from his personal diary and, under threat of being expelled from the U.S. Senate, eventually resigned.

Adams, Packwood, Lowry: I remember one of our reporters getting a call from an East Coast journalist who asked, “What is in the water out there?”

The Weekly's reporting found other issues with Lowry: allegations that he was drinking to excess, which seemed to exacerbate his temper and unpredictable behavior. It was later discovered that he had been stopped multiple times by the Washington State Patrol for speeding or suspicion of being under the influence. He had never been ticketed. Lowry had also been spotted late at night in the parking lot of an Olympia tavern with a woman who was not his wife; a police officer’s statement about the encounter seemed to contradict the governor’s explanation of it. The police officer’s account was kept under wraps, until we obtained it.

Lowry’s actions pushed some reporters into asking uncomfortable questions in an Olympia where old-school carousing and boundary crossing were old habits for many of the men who dominated the Capitol and went traditionally unquestioned by the press. The AP’s Ammons remembers how awkward he felt opening a press conference with, “Governor, do you have a drinking problem?” Lowry denied he did. He also remembers many in the Olympia press corps who believed Albright. “I believe Susanne” buttons popped up.

Lowry began losing support of some of his team members. His chief attorney, Jenny Durkan, whose father, Martin, was a mentor of Lowry’s, resigned in early 1995. Durkan had previously represented Brock Adams’ chief accuser, Kari Tupper. The future Seattle mayor’s stepping aside was taken by many observers as a signal that there was a “there, there” to allegations against the governor.

A report commissioned by Lowry found that he had engaged in inappropriate behavior with Albright, but concluded that it was basically a he-said, she-said situation and did not rise to the level of something a jury would find criminal, despite other women’s claims that Lowry had roving hands and had nonconsensually touched and kissed them, and otherwise harassed them. A Seattle Times headline about the report read: “Friendly touch or grope? It’s hard to know.”

It wasn’t hard for the victim to know, but the governor was another matter. The Seattle Times’ Mindy Cameron wrote of Lowry’s defense that, in his mind, he was “just a gregarious touchy-feely guy who didn’t need to change a thing.” It’s not an unfamiliar excuse. Clearly Lowry was in deep denial about his behavior.

Lowry claimed the report vindicated him. Its author, handpicked by Lowry, was attorney Mary Alice Theiler, now a federal judge, and she disagreed. She said that despite complaints by women who worked for Lowry, no actions were taken to get him to correct his behavior. Theiler said, “This report does not clear Mike Lowry. This report puts responsibility on his shoulders for conduct which distressed and offended a valuable employee.”

Lowry paid a settlement of $97,500 out of his own pocket to avoid a lawsuit from Albright. Lowry was told he had to get anti-harassment and anger management training. Still, while Lowry insisted he hadn’t done anything wrong, the payment pretty much locked in the view that he had to go. Lowry didn’t resign but decided not to run for reelection and finished his term. Downticket Democrats breathed a sigh of relief. Gary Locke, a detail-oriented moderate quite familiar with Olympia politics, was elected to replace him.  In political terms, he was decidedly not a Mike Lowry Democrat.

Not long after the settlement, Albright wrote a column in the Washington Post about the “shame, betrayal and depression that had engulfed her life.” Referencing Lowry and Packwood, she explained in stirring terms the impact of their behavior. “When a high-ranking elected official abuses a member of his staff, it is much like the betrayal of a priest who abuses a member of his parish, or a psychiatrist who abuses a patient," she wrote. "Sexual misconduct by a powerful politician is not just the violation of the usual employer/employee relationship. In my case, it was a violation of the trust and loyalty I had for a governor whose policies and principles I truly believed in.”

Lowry’s political career was over. He worked for a time in the private sector advocating on behalf of migrant workers and housing for the homeless. He ran for state commissioner of public lands in 2000, but lost. He seemed a marginalized political figure before he died in 2017. I remember seeing him at a legislative district convention in 2008 as he stood by himself against a wall watching the high energy of Obama supporters. Almost no one talked to him. Even as the state’s Democratic mainstream has embraced Lowry's progressive liberalism, if the young delegates knew who he was, they did not consider him a lucky charm.

In summing up her column, Albright explained what she hoped should come of the terrible saga. She wished that the Lowry and Packwood scandals would have an impact on raising awareness of their devastating impact on victims. “I will never forget the anguish I went though, and at times still go through,” she said. “I desperately hope that all the publicity around my case and others like it will shine some light on a problem that can no longer be ignored.”

Albright did help shed some light. Unfortunately, the scandals of the ’90s didn’t stop the problem.