In WA, incarcerated students are ‘left behind and left out’

Echo Glen School is still one of the worst performing schools in the state. We’re not doing enough to change that. 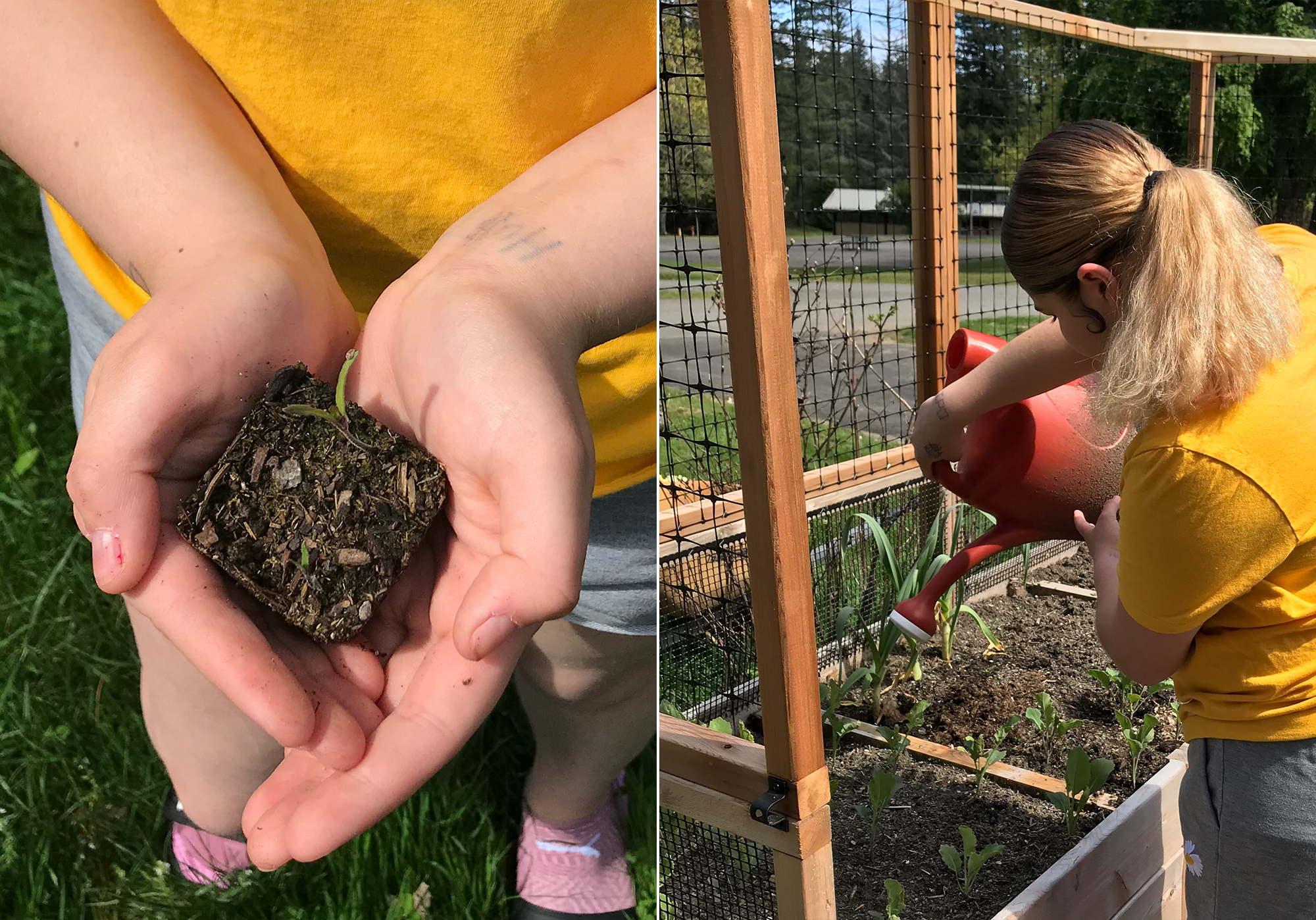 A student works in the edible garden at Echo Glen School. (Courtesy photo)

Issaquah schools are among the best in Washington state. Ninety-six percent of students graduate on time, and more than 75% demonstrate solid math and language skills — results that far outstrip Seattle, and even Bellevue. Issaquah’s kids are clearly set up to succeed.

But one school in the district languishes at the bottom of the pile, rating 2,044th out of 2,052 schools statewide. How can both things be true?

Well, at Echo Glen School, where students live year-round, more than a third have learning disabilities, many have grown up in foster care, and every one of them is low income.

It would be easy to point out that all of these kids are also serving criminal sentences, and leave it there. But that misses the point. Echo Glen, a juvenile correctional facility, is the last stop for teens on the fast train to state prison. With Washington’s two other long-term youth lockups, Green Hill and Naselle, it represents our last chance to put kids on a different track — so that they might contribute to our community, rather than costing it more.

These are bitterly polarized times, but I think we all wish for less crime. Reams of scholarly research have documented the power of education to decrease recidivism. The U.S. Department of Justice has been trumpeting that data for more than 20 years. In 1997, the department published a report that affirmed the cost of educating inmates is “minimal when considering the impact upon rates of recidivism and the future saving that results from preventing re-arrest and re-imprisonment.”

Yet education at Echo Glen — provided by the Issaquah School District since the facility opened in 1967 — hardly demonstrates the kind of energetic urgency you’d hope for, given the stakes. Long before the onset of COVID-19, the 90 students held there, most of them kids of color, were plopped in front of computers, dolefully trudging through online education. And the results have been predictably atrocious. At last count, fewer than 9% of Echo Glen students met basic standards in math and almost none graduated on time.

How can anyone be surprised? Even straight-A students from middle-class families have discovered how uninspiring classwork is when delivered through a computer screen, and the kids at Echo Glen have long equated school with failure. Expecting them to be invigorated by online learning seems, at best, unrealistic — to put it politely.

For this sorry state of affairs, Issaquah blames chronic shortfalls in state funding. It is true that the formulas determining how much money goes to education at Echo Glen haven’t been updated since the mid-1990s, when kids like these were called “super-predators.” Meanwhile, money for regular public school students has more than doubled during that time.

The problem, really, is a failure of will. Legislators have known about these shameful deficits for decades. When they had a chance to address them during the historic McCleary school-funding talks of 2017, incarcerated kids were again “left behind and left out,” as state Rep. Lisa Callan, D-Issaquah, put it when I spoke with her last week.

I thought we’d all become smarter about brain development and trauma and what’s really going on when young people commit crimes. But apparently not.

Last year, Callan and a bunch of bureaucrats from various government agencies met to hear from people affected by this long-festering disaster. Kids who had been locked up said they needed more one-on-one education. A budget analyst explained that it would cost $13 million more each year to fund education in juvenile prisons along lines similar to what we spend on regular public schools. He has since upped that forecast to $21 million.

The upshot? A new law was passed this year that outlines grand aspirations for what’s needed, but it appropriates just $500,000, to pay for yet another work group assigned to determine exactly how we’ll make it happen.

“We fund so many parts of the criminal justice system, but institutional education gets jack shit,” said Carmen Rivera, a former staffer at Echo Glen, who is now running for Renton City Council. “If these kids are ever going to be able to function and be successful, they need education.”

‘They will go to prison if we don’t do something’

I visited Echo Glen a few weeks ago, ahead of the school year’s Aug. 31 starting date. All of the 90 residents were serving court-ordered sentences, some for very serious crimes. But you’d never know it, watching them tend the pumpkin patches and blueberry bushes that are part of a new, volunteer-run Edible Schoolyard program.

A 21-year-old woman serving time for murder had just harvested rhubarb and strawberries, transformed the fruit into jam and tasted the culmination of her work spread on a croissant. This kind of experience — a project completed successfully, resulting from patience and perseverance — was altogether new to her.

Not long before, an Echo Glen student who had never even seen asparagus chomped a spear down raw, just to learn what he’d been missing. A volunteer told me about another kid with an avowed hatred of school who was gamely figuring out the fractions necessary to turn blueberries into blueberry muffins.

That’s the whole point of Edible Schoolyard, which was founded 25 years ago by renowned chef Alice Waters, with a curriculum aimed at helping kids connect to learning in new ways. Based in Berkeley, California, Edible Schoolyard has programs in all 50 states, many offering academic credit. But Echo Glen is its first youth-incarceration site.

Felice Upton, the facility’s former superintendent, brought it to campus this spring, desperate for something, anything, that might engage these young people.

“If something significant doesn’t happen to disrupt their path, they’re headed for adult incarceration,” she said. “They will go to prison if we don’t do something. It’s not going to happen in a regular math class, and certainly not through remote education.”

Upton knows what she’s talking about. Her last job was at the Washington Corrections Center for Women, where more than a few of the inmates were former students from Echo Glen. (Recidivism rates hover around 50% for kids released from our juvenile lockups.)

“Frankly, this is an emergency,” she told me. “Our graduation rate is dismal.”

A game of legalistic hot potato

That blunt assessment is powered by anger. And frustration. And a 2020 citizen complaint filed against the Issaquah School District on behalf of two Echo Glen students who said Issaquah was breaking federal law by failing to provide them with special education services. The state education department agreed.

Even before the pandemic effectively halted education at Echo Glen for 15 weeks in 2020, the school “provided close to no classes” for six months in 2019, due to lack of staffing. “Students were told to participate in games or sent back to their residential cottages,” the complaint says.

Issaquah concedes this point, saying it was nearly impossible to find anyone who wanted to teach at Echo Glen. “There was a lack of security, staff felt fearful, and … there were reports of assault,” the district told state education officials.

I can’t see this as anything other than a pathetic game of legalistic hot potato, with everyone pointing fingers, and virtually no one — except Upton and her team of volunteers — trying to forge solutions.

Some of those volunteers confessed to their own worries about working at Echo Glen. They live in the area. They’ve heard the helicopters circling when residents escape. But the past few months of weeding and harvesting have reshaped their views.

“I’d never done anything like this before, and it has opened my eyes,” said Rachel Hopkins, a stay-at-home mom who has been helping with the Edible Schoolyard program.

She keeps thinking about a young woman incarcerated at Echo Glen who journals so relentlessly that her fingers have calluses. Hopkins wondered: Was any teacher working to build on this student’s budding literary interest?  What kind of opportunities would meet her upon release?

Issaquah says the school is now staffed and ready for the new year. To make up for its past failures, the district sent letters offering to provide “missed education minutes” to the two students who filed the complaint — though there are dozens of others at Echo Glen whose constitutional rights to an appropriate education have been ignored. District officials declined to say whether either youth ever responded.