The case for long-term protection of Washington forests

The state Legislature should secure our legacy and future by providing 20-year funding to restore forest health. 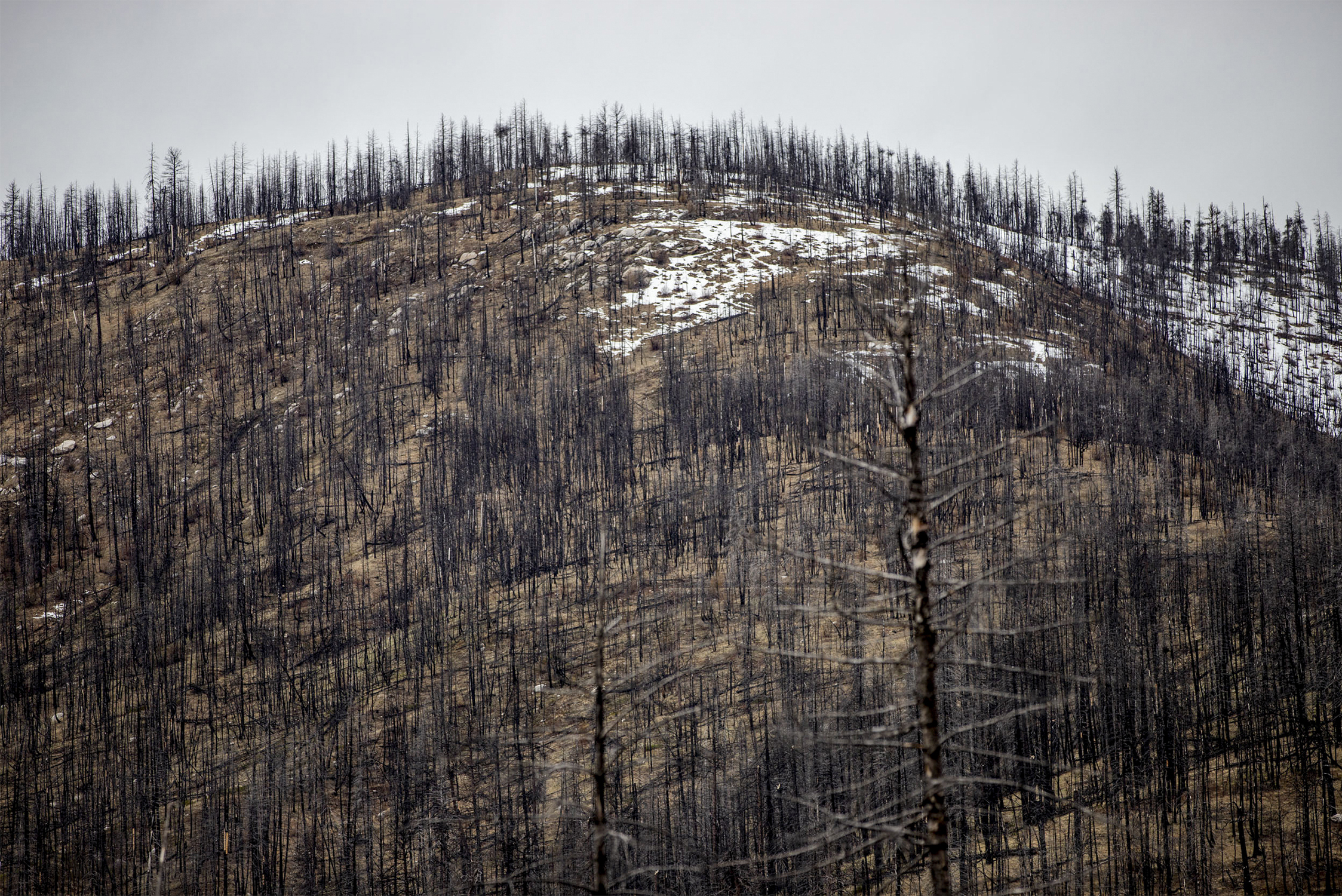 Evidence of previous wildfires in the Methow Valley. (Photo by Dorothy Edwards/Crosscut)

Wildfires are only getting worse in Washington. In the 1990s, an average of 86,000 acres burned each year.  More recently, on average, 480,000 acres of Washington forest and range lands have burned. More would have, had it not been for huge government expenditures and firefighters who risked, and sometimes lost, their lives.

Last year was the worst. In 2020, over 800,000 acres burned. Communities on both sides of the Cascades were threatened by fire and choked by unhealthy smoke. Flames destroyed hundreds of homes, digested the town of Malden near Spokane, and killed a 1-year-old boy whose family was fleeing the fire.

This isn’t the future I want. I can’t imagine it is the future anyone in Washington wants, which is why it’s crucial that the 2022 Legislature guarantee ample, dedicated, 20-year forest management funding. Failing to definitively fund long-term forest management could jeopardize all that depend upon our forests, including us.

Read another perspective on wildfire, from Knute Berger.

We need healthy watersheds, and we will not have them if the forests burn, nor will we save salmon runs and resident orca pods without healthy watersheds. We will not have cool, healthy rivers and abundant freshwater reservoirs if headwaters are absorbed by too many trees, or if snowmelt rushes away because there is no forest to hold it. And we will not preserve rural jobs and recreational activities, nor biodiversity, if foothill forests burn and don’t grow back.

Some don’t share my urgency. Some think fire is natural, and we should let forests burn. But many unhealthy forests are not natural. Some are the vestiges of dense, single-species replanting after logging. Too many are the result of humans extinguishing fire and restricting logging without providing an alternative way to thin smaller-growth, diseased trees and brush.

And, after fire strikes, especially on some Eastern Washington slopes, conifer seedlings that normally would lead rejuvenation might not survive rising summer temperatures. Human-driven climate change can affect what returns after catastrophic fire. On a warming planet, grasses, weeds and brush could unnaturally replace lowland conifers.

For years, many policymakers didn’t fully understand how wildfires threaten all of us. Some urban legislators considered forest health and firefighting more of an Eastern Washington issue.

Fortunately, over several years, three legislators and a land commissioner, Democrats and Republicans, transformed forest health from an issue that couldn’t get out of a legislative committee into a bill that unanimously passed both legislative chambers this year. House Bill 1168 is the culmination of their work. It funds firefighting equipment, firefighters and forest managers, programs to prepare communities for fire, and a forest management plan designed to prevent catastrophic fires.

It passed for three reasons. One is concerning.

The second reason HB 1168 passed is the economic, environmental and personal tolls imposed by 2020’s hellacious fire season were too much for any legislator, from whichever side of the mountains, to ignore.  West side legislators who hadn’t thought much about fire lived through weeks of lingering smoke and so did their constituents.

It’s the third reason HB 1168 passed that’s worrisome. At the start of the 2021 legislative session, despite years of laying groundwork and the still vivid memories of 2020’s fires, it was unclear whether HB 1168 would pass. Disagreement over how to pay for forest management could have killed the bill, just as it had in previous sessions. HB 1168 passed because stronger than expected state tax revenues and new federal dollars arrived like a rainbow’s end. The unexpected windfall made spending money easier because legislators didn’t have to make difficult choices.

While it is true that legislators put funding for HB 1168 into the baseline budget, ensuring its place in future budgets, that is not binding. In a tight year, when legislators will have to make difficult choices, forest management funding could be cut or suspended.

But even if the Legislature funds forest health every two years, restoring forests over millions of diverse acres requires more flexibility than a two-year budget cycle provides. A case from New Mexico serves as a warning. Following the 2011 Las Conchas fire, trees were planted when they wouldn’t survive because the funds had to be spent during the fiscal year. Ninety percent of the seedlings died, and the replanting money, having already been budgeted and spent, was never again appropriated at the needed level. Forests grow on generational cycles, and restoration decisions need to be driven by those natural cycles, not the state’s fiscal year.

Additionally, thinning forests is economical only if mills in timber communities can process small diameter trees. Retooling mills requires investment, and that investment is unlikely if a timber supply can be guaranteed only a few years at a time. Long-term investment requires predictability. Dedicated funding would provide it.

Amending our state constitution could provide that kind of funding. How? Lawmakers could propose amending the constitution so that for the next 20 years, Department of Natural Resources timber sale revenue would be spent on forest management. That would provide the DNR with the financial certainty needed to implement a long-term forest resiliency plan, and would provide the resources needed to partner with the U.S. Forest Service and sovereign tribal governments in managing forests abutting state lands.

Currently, our state constitution requires that DNR timber sale revenue go to K-12 school construction and other beneficiaries, such as universities and a few rural governments. The constitutional amendment I envision would for 20 years divert funds from these beneficiaries to preserve their asset: DNR forests.

With regard to K-12 school construction, Superintendent of Public Instruction Chris Reykdal has stated that those funds would not be missed because they comprise “an almost invisible share of the money we spend every year on school construction.” I bet in some districts and rural communities those dollars aren’t invisible. So for this to work, some beneficiaries would need to be compensated from the general fund.

This would be a radical but temporary shift in how we fund our forests. But while the legislature might not want to embrace radical ideas, the courts are stepping in.

A case brought by some environmental organizations asks the Washington Supreme Court to reinterpret the state constitution so that the DNR would not have to manage forests for beneficiaries. That could mean there would be fewer timber sales and that more acres would be locked off from intelligent forestry, primarily for carbon sequestration. Of course, trees sequester carbon only until they burn, and locking up forests and pretending they are natural increase the likelihood they’ll burn.

But we should not be choosing between clear-cutting and sequestering carbon. A consistently funded, long-term forest plan that mandated forest health and fire resiliency benchmarks be met could provide intelligent harvesting and maximized sequestration.

That the court is about to wade into forest management decisions is another reason the 2022 Legislature needs to assert the state’s commitment to restoring forest health and provide the DNR with the 20-year funding needed to increase the fire resiliency of Washington’s forests.

Remember, we are obliged to steward these forests for future generations. We can’t honor that covenant, or even preserve our own biological, recreational and spiritual relationship with our forests, if we accept annual incineration as the new normal. Annual incineration isn’t normal.

We created the conditions that have put our forests in peril. We need to own that and fix it. HB 1168 was a critical first step, but if we are serious about passing on the forests we inherited, legislators need to provide ample and untouchable 20-year forest management funding.­­­­­­­­­­­