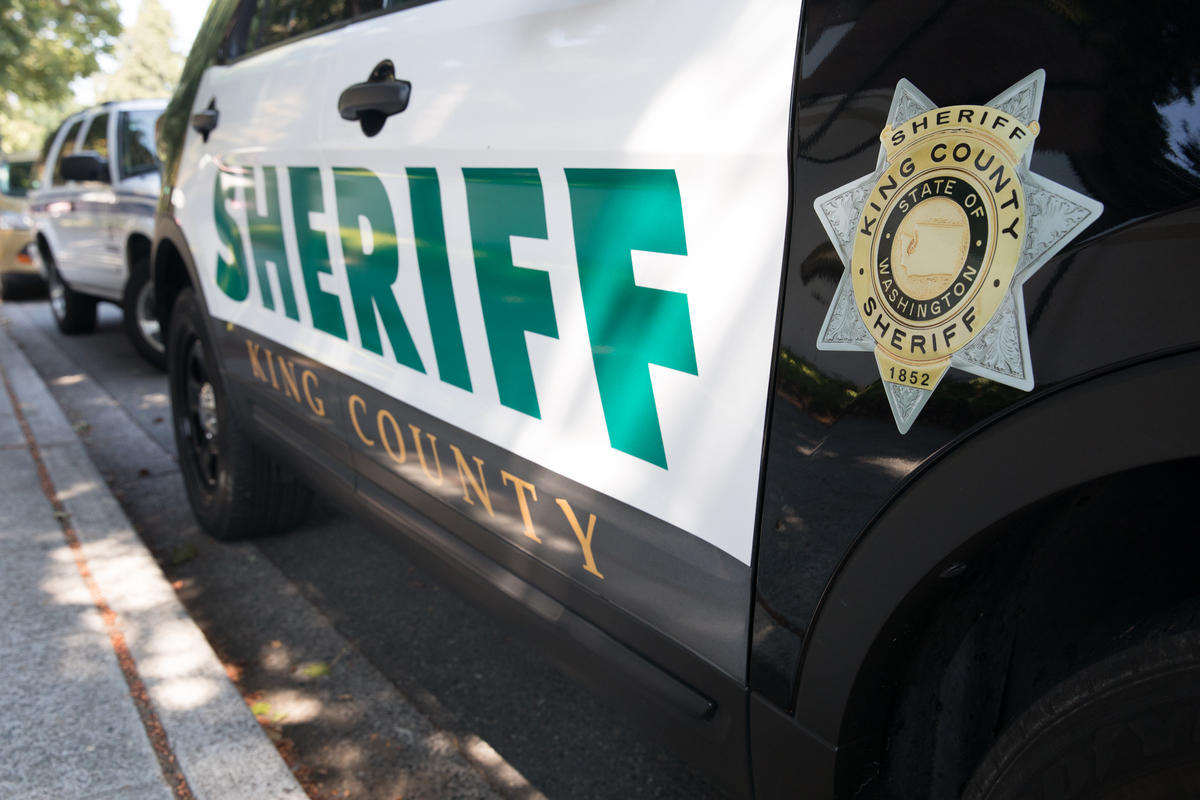 Following a King County Sheriff investigation, a young teenager has been charged with murder after a hit-and-run that resulted in the death of 53-year-old Gregory Moore. (Matt M. McKnight/Crosscut)

As far away as England, people are talking about a 15-year-old girl from King County. She was charged in September with felony murder for the hit-and-run death of a Maple Valley man out for a jog on a Sunday morning.

“THRILL KILL,” shrieked a British tabloid, zeroing in on the police report that alleges the teenage driver and her two passengers laughed at the way the car’s impact sent 53-year-old Greg Moore flying backward over the hood and into a ditch, where he died. When detectives began investigating the possibility that the girl had hit another person only hours before — without the fatal end — King County Councilmember Reagan Dunn fired off a letter citing the “intentional and nefarious” pattern of the girl’s “predatory behavior.” He has called for her to be charged as an adult.

Since news of the incident broke, hundreds of emails from outraged citizens demanding the same have flooded the inbox of King County Prosecuting Attorney Dan Satterberg. “Out for blood” is the way one person in Satterberg’s office described the overall tone of these messages to me.

Dunn, a former federal prosecutor, surely knows how closely his wording resembles the racist “superpredator” trope of the 1990s, which demonized a generation of Black youth. I can’t help wondering whether he would have used a different term if the suspect had been a white kid in Laurelhurst, rather than a Black girl in SeaTac.

Satterberg, who charged the girl as a juvenile, has dutifully tried to educate the public about the laws that constrain him. Given the age of this defendant, her lack of prior criminal history and the specific charges, there is no realistic channel to process the teen as an adult.

But these are minor details bobbing in a wave of lust for revenge. Some of the outcry stems from the fact that, if found guilty as a juvenile, this menace behind the wheel cannot be imprisoned beyond her 21st birthday. But I suspect also at play is backlash against our current emphasis on “restorative” justice — a sense that we’ve overcorrected, gone too far.

I get the outrage and disgust. The idea of a girl committing the same terrorizing crime twice in rapid succession does indeed conjure the image of a budding sociopath.

Picture the scene: Four kids are tearing down a rural road just after dawn, in cars they had no permission to drive — three teenagers in the lead, one following behind — and they see a man out for his morning run. “I’m going to scare him. I’m going to bump him,” the 15-year-old driver of the first car says to her two passengers, according to charging papers.

After hitting Moore, they pull over down the road. They are “freaking out,” one of the girls later tells an investigator. Then they turn around and drive back, right past the crime scene. They never report any of it.

Those who study youth crime see this kind of impulsive thrill seeking as obvious evidence of immaturity. What’s more surprising is that, in this case, the prosecutors do, too.

“You kind of want to believe that our children don’t do these things. But in truth, her actual conduct is so similar to what stupid kids do,” Jimmy Hung, chief of the Prosecuting Attorney’s juvenile crime division, told me. “This is exactly how teenage brains work — they start to believe they’re invincible.”

If we agree that the girl at the wheel was indeed a kid, what, then, does justice look like? An eye for an eye? Should a teenager be locked away for life — as some commenters have urged — because she was idiotically reckless? And would that desire for retribution be equally fierce if the suspect were white?

Though no picture of the girl has been released, anyone watching the newscast on Fox 13, KOMO and KIRO 7 would see, through shots of the suspect in court, that she is Black.

“I certainly think race is at play,” says Eric Trupin, a child psychology professor at the University of Washington, who consults for the juvenile lockup where this young woman will likely spend her next few years. “In this country, race is always at play.”

That possibility was precisely what Greg Moore’s widow dreaded during the two months detectives searched for a suspect. In fact, she actively hoped the person would turn out to be white. “I so didn’t want this to be a race thing,” she told me.

Michelle Moore does not believe her husband’s death was racially motivated, and she wants to trust in the possibility of rehabilitation and change. But she cannot get past the deliberate violence in the way he died. Not long ago, she saw a video of the accused killer at age 11, receiving a pet lizard as a gift. “She was this sweet, innocent girl. It’s just horrifying, what she became a few years later,” Moore said. “That little girl is gone.”

On Oct. 1, while locked in juvenile detention awaiting trial, the girl turned 16. If she had committed the same crime today, her case would have landed automatically in adult court.

But the turn of a calendar page is an arbitrary line. I don’t know many people who believe a kid’s brain is much different at 16 than it is at 15 and three-quarters. And that person is, indisputably, an adolescent. It also seems clear that this particular adolescent has endured hardship. Her mother is not part of her life. She had been living most recently with her father’s former foster mom. Law enforcement sources say she hung out at high school, but rarely attended class.

None of this is an excuse, though it is context. And context is important when considering justice. The noise surrounding this case obscures aspects of it that most of us can agree on: that this girl clearly needed more supervision than she was getting; she appears to have a hole where empathy should be; and she needs to change. The entire point of the juvenile system — unlike adult prison — is to create this kind of change.

Admittedly, our record here is imperfect. About 35% of kids sentenced to Washington’s youth lockups commit new felonies after being released. But violent teenagers can indeed transform. I’ve interviewed several who did so while in prison, where they also endured brutalizing assaults and the torture of solitary confinement — injuries that endured long after their release.

Maybe that kind of sentence would feel like justice to Michelle Moore and those mourning the death of her husband, a beloved father of three. It would certainly convey the public’s disgust. But the kids I know who changed in prison are rarities, and they did so mainly through reading about other people’s experiences. I’ve never met anyone who learned empathy through hard punishment alone.

I keep thinking about this comment, sent to me long ago from a middle school teacher: “Behavior is a language.”

I’ll leave it to the experts to decode the vocabulary behind this girl’s alleged acts. But here’s my guess: A kid who intentionally rams a stranger with her car is drowning in unarticulated rage. She might feel that nothing she does matters much in the world.

In that sense, she shares some things with those now calling for her head. We all live with the feeling that life is going off the rails, that none of the old rules apply and nowhere is safe. We all want to draw a line and restore order. But this kid should not be our vehicle to do it.


Update: On Oct. 19, the King County Prosecutor updated charges against the 16-year-old girl to include the earlier alleged hit-and-run. She now faces an additional count of assault in the second degree and felony hit-and-run, though no victim has been identified.