The narratives that define Seattle's 2021 election 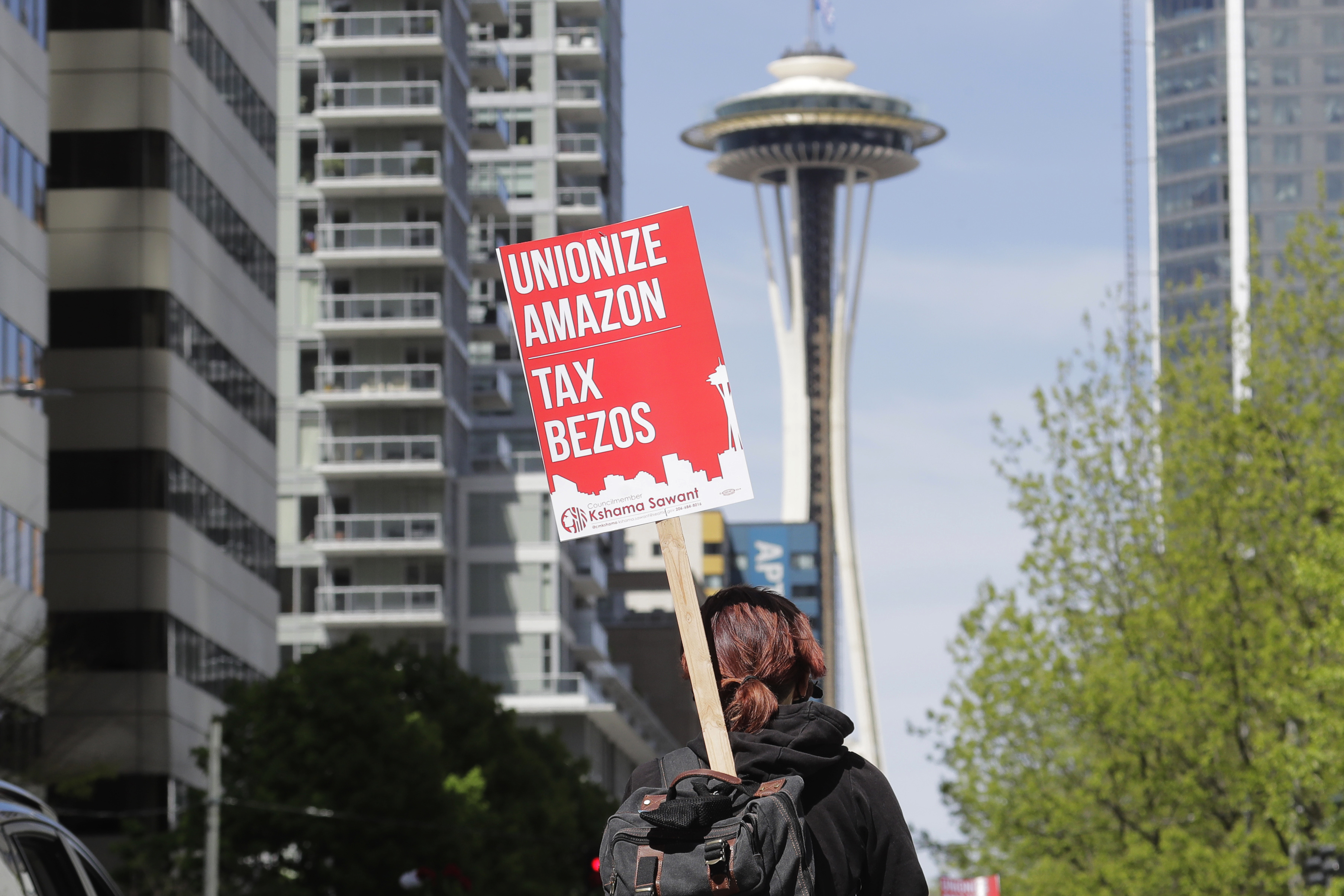 In this May 1, 2020, file photo, a protester carries a sign that reads "Unionize Amazon Tax Bezos," in reference to Amazon founder and CEO Jeff Bezos, while riding a bike during a car-based protest at the Amazon Spheres in downtown Seattle. (AP Photo/Ted S. Warren)

Listen closely to the Seattle election discourse, and you’ll hear two very different stories about our city and what’s wrong with it.

According to one story, the problem lies at City Hall, specifically with the extreme, divisive left-wing majority that now controls the council. They’ve defunded the police and enabled an explosion of crime, especially in the downtown business district. They’re putting “mom and pop” landlords out of business with onerous new laws. They want to tax, tax, tax, but despite record levels of spending on homelessness, the tents still multiply and the garbage piles up.

Call it the “Extreme Takeover” narrative. Want examples? Look no further than the opinion section of The Seattle Times — or, for that matter, its home page. In this year’s elections, this narrative pits incompetent ideologues (the left-leaning candidates) against responsible public servants (the right-leaning candidates) — and the right comes out looking pretty darn good.

The second story locates the problem elsewhere: in a deeply entrenched status quo whose decades-long reign has given us extreme inequality, urban housing crises, racist policing and a spiraling climate emergency. Plodding reform isn’t enough. Recently, under pressure from the left, the city has taken the first tentative steps toward more fundamental solutions: taxing big business to fund affordable housing, diverting a trickle of money from the Police Department to more constructive approaches to public safety. In championing such measures, the city council’s progressive majority has battled obstruction from the mayor at every turn. Now, big business and the right are fighting back with all they’ve got.

Let’s call this one the “Class War” narrative, with a nod to Warren Buffett’s 2006 observation: “There's class warfare, all right, but it's my class, the rich class, that's making war, and we're winning.” In this year’s elections, this narrative pits champions of the marginalized and exploited (the left-leaning candidates) against tools of self-interested corporate elites (the right-leaning candidates) — and who wants to be a corporate tool?

It’s not the first time these two stories have appeared in Seattle politics. But never before have they so thoroughly defined an election cycle. Never has there been a clearer left slate and a clearer right slate — heck, the right slate even features a real, honest-to-God Republican!

Those polarized narratives are matched by a clear divide in the forces backing each slate. In contrast to the previous two mayoral elections, business and labor groups did not converge on a middle-of-the-road consensus candidate. Big business favorite Bruce Harrell has picked up a few endorsements from the conservative wing of the labor movement. But the largest unions, as well as King County’s central labor body, MLK Labor, lined up enthusiastically behind Lorena González, who is not trying very hard to please the business lobby.

This pattern extends to the other competitive Seattle races. Progressive labor has joined the left in cheering on abolitionists Nikkita Oliver and Nicole Thomas-Kennedy in their bids for city council and city attorney. Meanwhile, business groups and their allies, including backers of the dead Compassion Seattle initiative, have overwhelmingly thrown their support behind Sara Nelson and Ann Davison — and, of course, the campaign to recall District 3 Councilmember Kshama Sawant, which will be decided in a separate ballot on Dec. 7.

What should we make of this new alignment — the grassroots left and the progressive bulk of the labor movement on one side; big business and a handful of conservative-leaning unions on the other — and the narratives they’re weaving?

Back in 2018, the company emerged from the political shadows, dramatically threatening to stop expanding in Seattle if the city went ahead with a proposed tax on large corporations to fund housing and homeless services. That power move solidified an alliance among big businesses that don’t want to pay more taxes, construction unions whose members build Amazon’s towers and Nextdoor types who are tired of the tents.

The narrative they coalesced around? Extreme Takeover. The city council, so the story went, had been captured by ideologues who were mismanaging taxpayer dollars; now it was intent on killing the goose that laid the golden egg. Progressive labor joined the grassroots left in a last-ditch effort to defend the doomed “head tax,” but it wasn’t enough. The Extreme Takeover narrative took over public opinion and the council repealed the tax.

It was a second power move by Amazon that brought the Class War narrative to the fore the following year. In a grand gesture, Amazon dumped a million dollars into the political action committee of the Seattle Metropolitan Chamber of Commerce to elect business-friendly candidates. In so doing, it anointed the corporate tools. Class War it was. Public opinion swung left and the more progressive candidate prevailed in nearly every race. Amazon had practically given the new council a mandate to tax big business, which it did in 2020 to popular applause.

While we’re blaming Amazon for our divided polity, we may as well ask why homelessness has become such an intractable crisis in the first place. Thanks in part to Amazon’s massive and still-growing presence in Seattle, the pressure to extract profit from every square foot of real estate has grown so intense that it’s no longer possible to be poor in private.

So if you miss the good old days of politics conducted through handshakes behind closed doors, feel free to blame our corporate overlord. But I don’t think Amazon should get all the credit.

More fundamentally, this new split is the result of the emergence, over the past decade, of an independent grassroots left in Seattle. Its size and power shouldn’t be overstated, but it has grown strong enough in the past few years to be able to set the agenda in some cases. That happened with the head tax in 2018. And it happened again last year with the movement to defund the Seattle Police Department. In both cases, the grassroots left led and progressive labor came along. In both cases, the public brawls were messier than the more stage-managed policy fights typically initiated by labor. The left is brasher, less cautious and less calculating. It wants to move faster.

So, what’s going to happen in next week’s elections and into the future?

There are reasons to think the right is in a stronger position this year than in 2019. The business bloc has gotten smarter. Under new leadership, the chamber is no longer endorsing or directly supporting candidates through its political action committee. (Thanks to new campaign finance rules passed in response to the 2019 debacle, Amazon couldn’t make the same mistake twice if it wanted to.) Instead, business interests are exerting their influence more quietly through committees focused on specific candidates, and strategic wedge issues like homelessness — that was the play made by Compassion Seattle.

Weighing in the left’s favor is the popular JumpStart corporate tax — proof of the city council’s efficacy and leadership, proof that Amazon doesn’t always win the Class War — and the fact that Compassion Seattle was knocked off the ballot.

On the other hand, Nicole Thomas-Kennedy’s inflammatory tweets were a gift to the right, undoubtedly strengthening the Extreme Takeover narrative in these critical last few weeks.

After the primary I predicted a left sweep. I’m still sticking with my side, but if I were betting real money, I wouldn’t bet a lot of it. I think all these races are going to be really close.

This year’s elections matter immensely. But regardless of the results, I don’t think the new political alignments or the two narratives I’ve described are likely to dissolve anytime soon. The left isn’t going away. On the contrary, I believe it will continue to grow. Increasingly, it will constitute an independent power bloc that labor can ally with and, under some circumstances, win. If business wants to return to the era of handshakes and consensus candidates, at the very least it’s going to have to make some concessions to woo more of labor away from the left.

More to the point: The right simply doesn’t have answers to the burning issues of our time. Harrell can’t philanthropize Seattle out of the homelessness crisis, or fix the police by asking them to watch George Floyd’s murder. González, on the other hand, working with a progressive council, can implement far-reaching zoning reform and raise new progressive revenue, putting the city on track to dramatically grow our affordable housing stock over the next decade. She can lead on meaningful police reform, divestment and investment in effective alternatives to policing and the court system. None of this will be easy or quick, and it will all be highly contentious. But it’s the only way forward.

The upshot? The Class War narrative is fundamentally a better reflection of our 21st century reality than the Extreme Takeover narrative. If the right wins these elections, its failures to make tangible progress will only set the stage for the next swing to the left.

Disclosure: The organization I work for, the Transit Riders Union, is part of the grassroots left. TRU was involved in the campaigns to tax big business in 2018 and 2020; it was a plaintiff in the lawsuit that disqualified Compassion Seattle; and in this year’s elections it has endorsed Lorena González, Nikkita Oliver and Nicole Thomas-Kennedy.