Whatever move Sue Bird makes next, her legacy is secure

After the Seattle Storm’s narrow loss in the WNBA playoffs, the basketball legend considers retirement. And that’s OK. 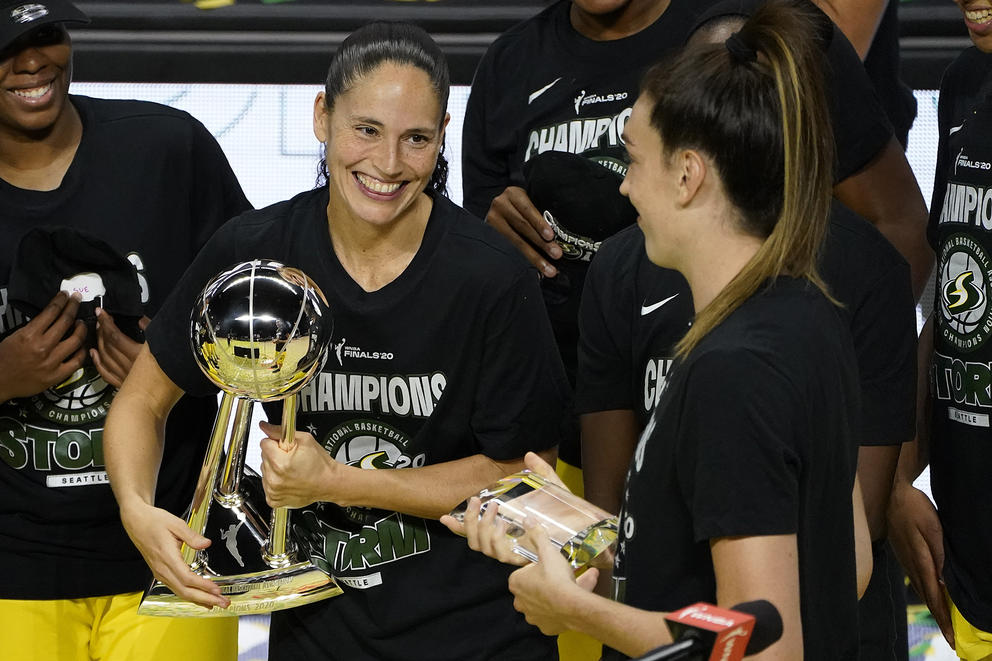 Whether she retires or not, Sue Bird is already a legend.

That’s the most important message to send right now to a woman who has given nearly two decades of her life to Seattle basketball. And it’s the reason why, as much as I wanted to chant “one more year” with fans who watched the Storm’s playoff elimination on Sunday, I let my heart adjust to her possible absence instead.

As superhuman as our veteran point guard seems to be, she cannot make time go backward — and we’ll have to make peace with that inevitability. Why not now? Then, if she does return for another year on the court, we can be even more jubilant to welcome her back if she chooses to keep playing. I, for one, prefer the joy of an unexpected outcome to the disappointment of a dreaded one.

At 40-years-old, Bird herself has nothing left to prove — on paper, at least. Beginning in 1998, she has won four WNBA championships, five Olympic gold medals and two NCAA rings, all on top of a boatload of international honors from her time overseas. Her trophy case is so heavy it probably needs steel beams to keep standing.

But Bird is so much more than a list of accolades. She exudes a confidence on the court that seems to make everyone around her play better. And her advocacy around a variety of issues — including gender equality, LGBTQ rights and racial justice — has changed the world in ways that may take generations for us to fully appreciate.

I’m a relatively recent Storm fan, so it’s easy for me to remember the first time I saw the magic of Sue Bird. Coincidentally, it was also during a playoffs home game against the Phoenix Mercury, three years before the one the Storm narrowly lost this past weekend. All throughout that entire 2018 season, I had seen her make no-look passes and crucial assists, all while racking up a steady stream of her own points on the score sheet.

But that night, something new happened. Headed into the fourth quarter of game five of the 2018 semifinals, the Storm were trailing, Phoenix Mercury center Brittney Griner standing like a brick wall in every possible lane to the basket. Sue Bird, meanwhile, was playing with a broken nose and a clear mask suctioned to her face. Things weren’t looking up. True to my strategy of trying to avoid a letdown, I told myself I had seen some fantastic basketball that season and prepared for a loss. It had been a privilege to see Diana Taurasi and Bird go head-to-head, no matter who won.

And then Bird went, well, berserk. The change in her was palpable, even from the KeyArena nosebleeds. It was like she had hoovered up the invincibility star in Mario Kart or something. Suddenly, she was sinking deep three after deep three. Transfixed, I watched her, momentarily glancing up at the scoreboard as a 76-76 tie became an 86-79 lead, then a 94-84 win, seemingly through the sheer force of her willpower alone. I don’t think I’ve been in a louder arena in my life.

For fans in Seattle who have 20 years’ worth of such memories, I can understand why it would be hard to let go of the Bird era. I understand why someone would want “one more year,” one more shot to see something like that — the kind of sports moment that lives in your brain forever, that you turn to when you need to remember the power of the human spirit. I’ll take every last second of Bird I can get, even if she keeps playing until she’s in the AARP and beyond. Hell, she could be a 200-year-old cyborg held together by rusty screws and I’d still watch her play.

But this is clearly an emotional juncture for Seattle’s most decorated athlete. After the game on Sunday, when asked about the possibility of playing another season, Bird said, “Usually I’m like, ‘Nope, one more year.’ This is the first time I’m really gonna sit back and, I don’t know, see how I feel.”

“[It] makes me want to cry,” she said, referring to the pending retirement decision. “I’ve been really trying to push away those thoughts.”

Bird has plenty of time to make her choice. And while she certainly has nothing left to prove to us, perhaps she has something left to prove to herself. Championship trophies aren’t everything for athletes and there may be some goal — personal, ineffable — that will drive her to keep competing at age 41. It’s a decision that’s hers and hers alone.

But if there’s any piece of her that’s pondering whether she has done enough, won enough, and cemented her legacy firmly enough, the city of Seattle can assure her that she has. Whether she gives us one or not, we don’t need “one more year” to know that.