What the Seattle election results mean for progressives

To grow into a truly mass movement, the left must figure out how to sustain mass participation between elections. 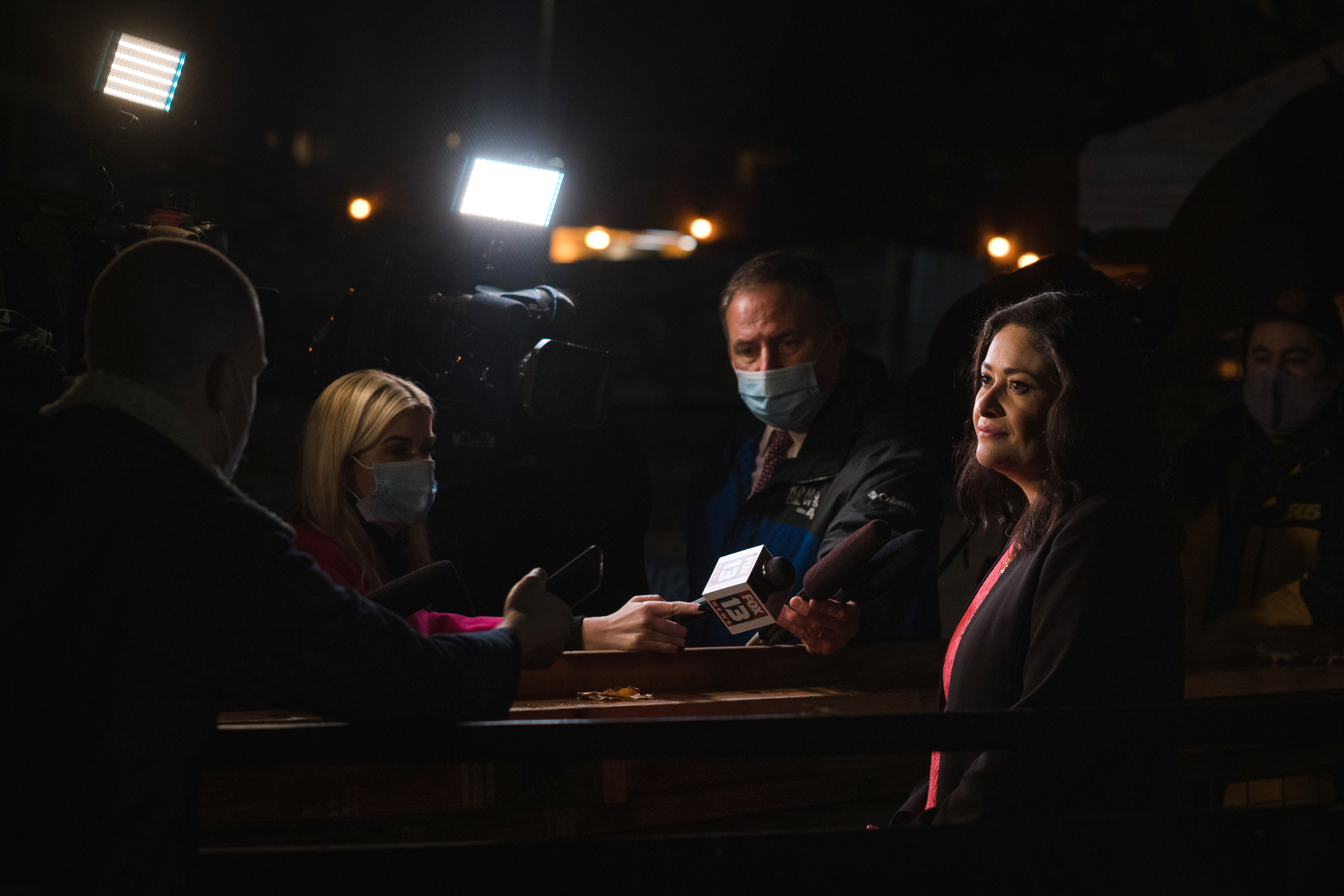 Now we all get to find out what Bruce Harrell’s love can do for Seattle.

The progressive left got clobbered in last week’s elections. Once final counts are tallied, Nikkita Oliver and Nicole Thomas-Kennedy will land in the respectable high 40s; but they fell to weak opponents, candidates whom Seattle voters have, in previous elections, roundly rejected. And Lorena González lost by what could reasonably be called a landslide.

The “extreme takeover” narrative I described in my last column prevailed. A solid majority of Seattle voters want an end to divisive left-wing politics and a return to sensible moderation, compromise and consensus. That, at least, is how those who buy in to this story are telling it.

It’s curious to see commentators (Sandeep Kaushik and Knute Berger, for two) cast the $15 minimum wage won in 2014 as an example of the old, desirable, genteel politics — as proof that it can accomplish more than filling potholes. They neglect to mention what it took to make the minimum wage increase so inevitable that business was forced to the table: a hard-fought, multimillion dollar labor-driven ballot initiative in SeaTac the previous year, a campaign that was in every sense adversarial.

Just as telling is the absence from their analysis of the JumpStart corporate tax, arguably the foremost progressive policy achievement of the past five years. It’s instructive to compare the two fights. In both, left-flank pressure from Councilmember Kshama Sawant and allied organizations was key. But in the case of JumpStart, Round 1 was the dramatic and messy failure of the “head tax” two years earlier, rather than success in a smaller city; the campaign was instigated by the grassroots left rather than union money; and, although some businesses eventually came to the table, business as whole is still unreconciled to defeat — the Seattle Metropolitan Chamber of Commerce continues to fight the city in court.

In both cases, the result was a highly significant and popular policy. But JumpStart is harder to squeeze into the straitjacket of the “extreme takeover” narrative, which tries to draw a bright line between the good old days when Seattle used to solve big problems in polite ways, and the recent years when the far left’s ascendance has mired the city in acrimony and dysfunction.

As Erica Barnett and Doug Trumm have pointed out, peddlers of this narrative tend to exaggerate the left’s power in City Hall, especially when it comes to homelessness. They consistently and strategically blame the city council for failures that properly lie with the executive or beyond the control of either branch. One of the great frustrations of the past four years has been watching council members heroically try to deliver more housing, shelter and services — the kind of effort that should make the backers of Compassion Seattle proud — only to have Mayor Jenny Durkan or various other hurdles block the execution.

Now, the old guard really has its chance to govern. Sara Nelson’s victory moves the council right; other members may read the room and grow more cautious. If the attempt to recall Sawant succeeds next month, that effect will be multiplied. But regardless, moving forward, it will become harder to blame failures to fix the city’s problems on an ultraprogressive council.

I hope, especially for the sake of the thousands of my fellow Seattleites who will sleep outside tonight, that Harrell, Nelson and City Attorney-elect Ann Davison prove to be less bad than many on the left fear. But I struggle to imagine them delivering real solutions to the housing crisis, a better approach to public safety or the dramatic transportation shift that’s needed to meet Seattle’s climate goals.

We live in times that demand much more than incremental change — changes that powerful and conservative interest blocs, from big business to single family homeowners, will strenuously resist. Former Mayor Ed Murray entered office with a promise to raise the minimum wage. Harrell arrives promising to fix homelessness while preserving the status quo. Love, unity and healing are nice words, but they don’t alter the impossibility of that task.

If the next four years unfold poorly, that could create an opening for a progressive-left mayor with an ambitious vision to win in 2025. But it would be a mistake for progressives to hang around waiting for the other side to fail, or merely revert to being the noisy opposition. The decisiveness of our losses in this election invites reflection. What can we do better, what lessons can we draw?

Big city progressive movements suffered setbacks around the country last week, with a few notable exceptions. A couple of interpretations of this fact are worth considering.

Mainstream media are more than happy to provide one explanation: “Defund the police” and “abolitionism” are ideas that repel, rather than attract, a majority of the electorate, across all racial groups and even in the nation’s most progressive enclaves. I think the election results do force us to reckon with this argument. Minneapolis voters declined to replace their police department with a new public safety agency, even as they voiced support for rent control; in other words, this wasn’t a wholesale anti-progressive turn.

To entertain this does not mean that the goal is wrong, or that progress toward it cannot be made by electoral means, or even that the slogan should never be used. But if the left wants to win elections, we may need to think more deeply and strategically about what messages are right for what purposes.

Another layer of explanation proceeds from the national context. In retrospect, it’s clear that Trump’s election in 2016 really lit a fire under urban progressive movements. Every good liberal Democrat donned a pussyhat and joined the #Resistance. The left rode that wave, in some cases channeling its energy into pathbreaking policies. Last year, the COVID-19 pandemic and the murder of George Floyd pushed it higher. But now, with Joe Biden in the White House, the wave has broken and we’re seeing a swing back toward moderation and incrementalism.

I don’t believe this new normal will last very many years. Global capitalism has a rough road ahead (as I’ve written about here and here), climate turmoil continues apace, police will not suddenly stop killing Black people. Crises of all sorts tend to undermine the legitimacy of the status quo and create openings for change. But this perspective highlights how dependent the progressive left has been on moments of crisis, the zeitgeist of any given year, larger forces that shape the mood of the electorate or public opinion.

The challenge this poses to the progressive left is how to build power that endures between crises without crumbling under a backlash or its own frailty; and how to shape public narratives consistently and effectively, rather than in fits and starts. How do we do this?

This is related to the problem of election turnout. Nearly half of Seattle’s registered voters, and far more than half of eligible voters, didn’t vote at all in this election — especially young people, poor people and people of color. In other words, people who would benefit from and support a progressive agenda. Shifting local elections to coincide with the higher-turnout national cycle would help, and it’s worth fighting for. But ultimately that’s a limited fix to a deeper problem: How can the left grow from small groupings of activists that periodically win the fandom of a larger population into a true mass movement?

This isn’t primarily about how we run election campaigns. The deeper challenge is how to build organizations that can sustain mass participation between elections; that activate, engage and educate the people who don’t feel that politics holds any answers to the problems of their lives. There’s no how-to manual for this. We have to figure it out for our times, and until we do that we’re unlikely to win much more than incremental change. For the past five years we’ve had the wind at our backs. Now, to get anywhere fast, we have to learn to pedal.