The Space Needle at various points in its construction in 1961. (Courtesy of MOHAI)

When the Space Needle rose quickly on the Seattle city skyline, the response was varied. Some loved it, some hated it. Some likened it to a flower blossoming, others said it resembled a mushroom cloud. The Cold War was on everyone’s mind. So was the future. The Needle was supposed to represent the Space Age, a bright future that looked to the stars. It was also supposed to represent the aspirations of the 1962 Seattle World’s Fair, also called the Century 21 Exposition, and reflect the forward-looking city itself.

But in the fall of 1961, as the Needle tower neared completion and the citizenry warmed to it, controversy broke out, an all-out war of words between the architects — Victor Steinbrueck and his boss John “Jack” Graham Jr.

That there was a war is no secret — the conflict played out in the press at the time. But the dispute between these two groundbreaking architects goes deeper than previously understood. New files discovered in the dirt cellar of Steinbrueck's Eastlake home reveal that Graham sought censure of the man who provided the sketches that gave the Space Needle’s tower its unique shape.

This and other revelations found in the files surrounding the Space Needle's creation are the subject of the first episode of Crosscut's new podcast series, Crosscut Reports.

A quick overview: John Graham was head of a Seattle-based international architecture firm responsible for large retail architecture, such as the Northgate Center. Built in the 1950s, and later renamed the Northgate Mall (and now known as Northgate Station), that retail destination was one of the world’s first auto-centric malls. Known as a "businessman's architect," Jack Graham went on to design malls and other projects around the world.

It was that reputation that helped earn Graham's firm the job to design the Needle. Graham became a partner in the development of the Needle, which was financed by five private investors.

In the summer of 1960, after Graham and his team had toyed with numerous design concepts, he was unsatisfied with what his staff had come up with. So in the summer of 1960 he hired a University of Washington architecture professor, Victor Steinbrueck, to come in and move the design along. He paid him $5 per hour.

Steinbrueck had mostly designed mid-century single-family homes and smaller structures at that point. He had gone to the University of  Washington’s architecture school, and briefly worked for Minoru Yamasaki, who would later go on to design the Pacific Science Center and the original World Trade Center in New York. Yet Steinbrueck was better known locally for his “lonely” advocacy of historic preservation, especially for Skid Road and Pioneer Square. Graham wanted some fresh eyes and ideas that would get the design over the top in time to get it built for the fair. He hired Steinbrueck on a recommendation from a fellow architect.

Sure enough, in August of 1960, Steinbrueck had a breakthrough. Inspired by an abstract wooden sculpture called “The Feminine One,” the architect conceived an elegant, feminine shape for the tower — and a pinched waist that created a dramatic effect as the saucer top extended out over the base. (One local documentarian believes "The Feminine One" was inspired by Syvilla Fort, a pioneering Black dancer at Cornish College.) 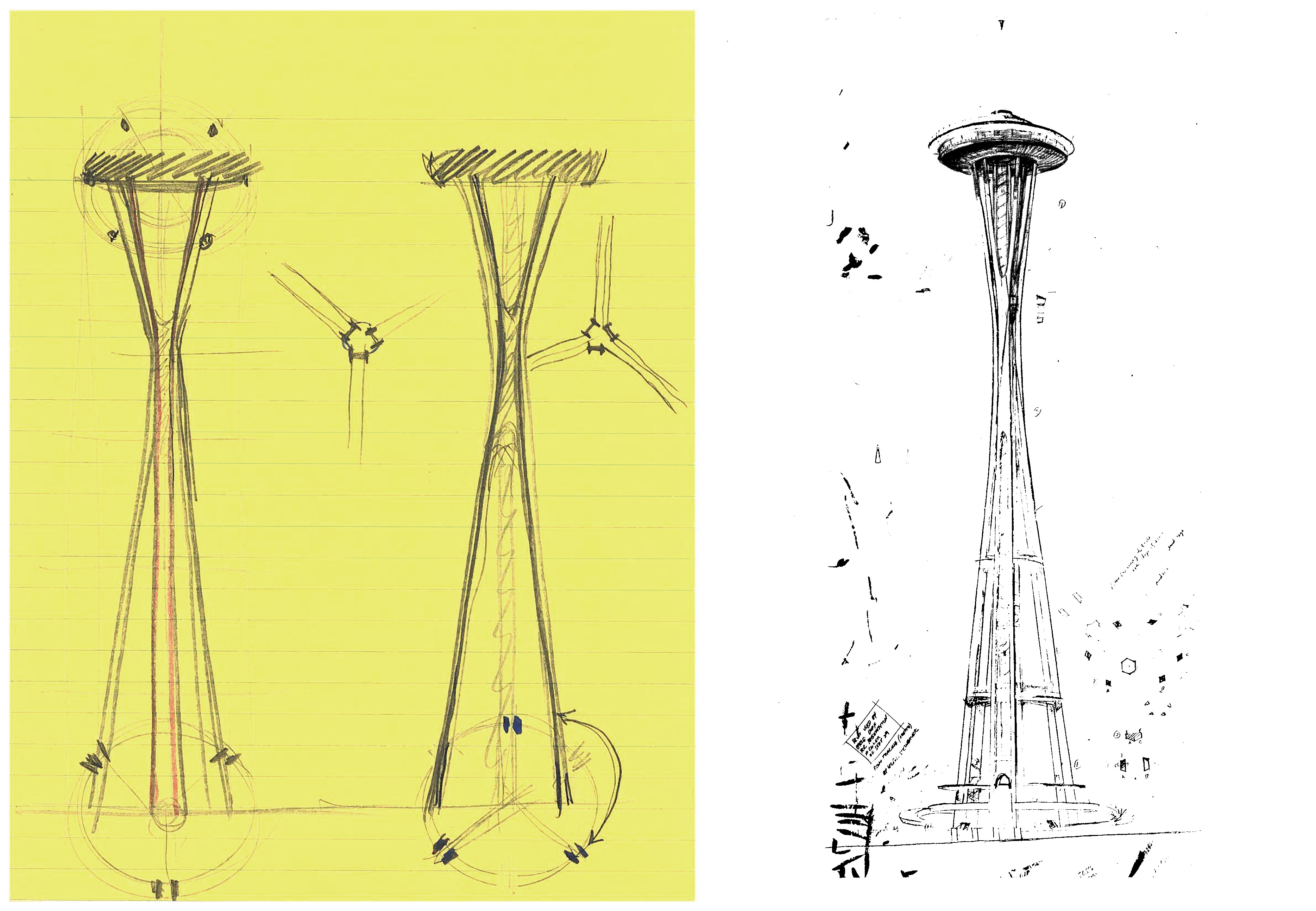 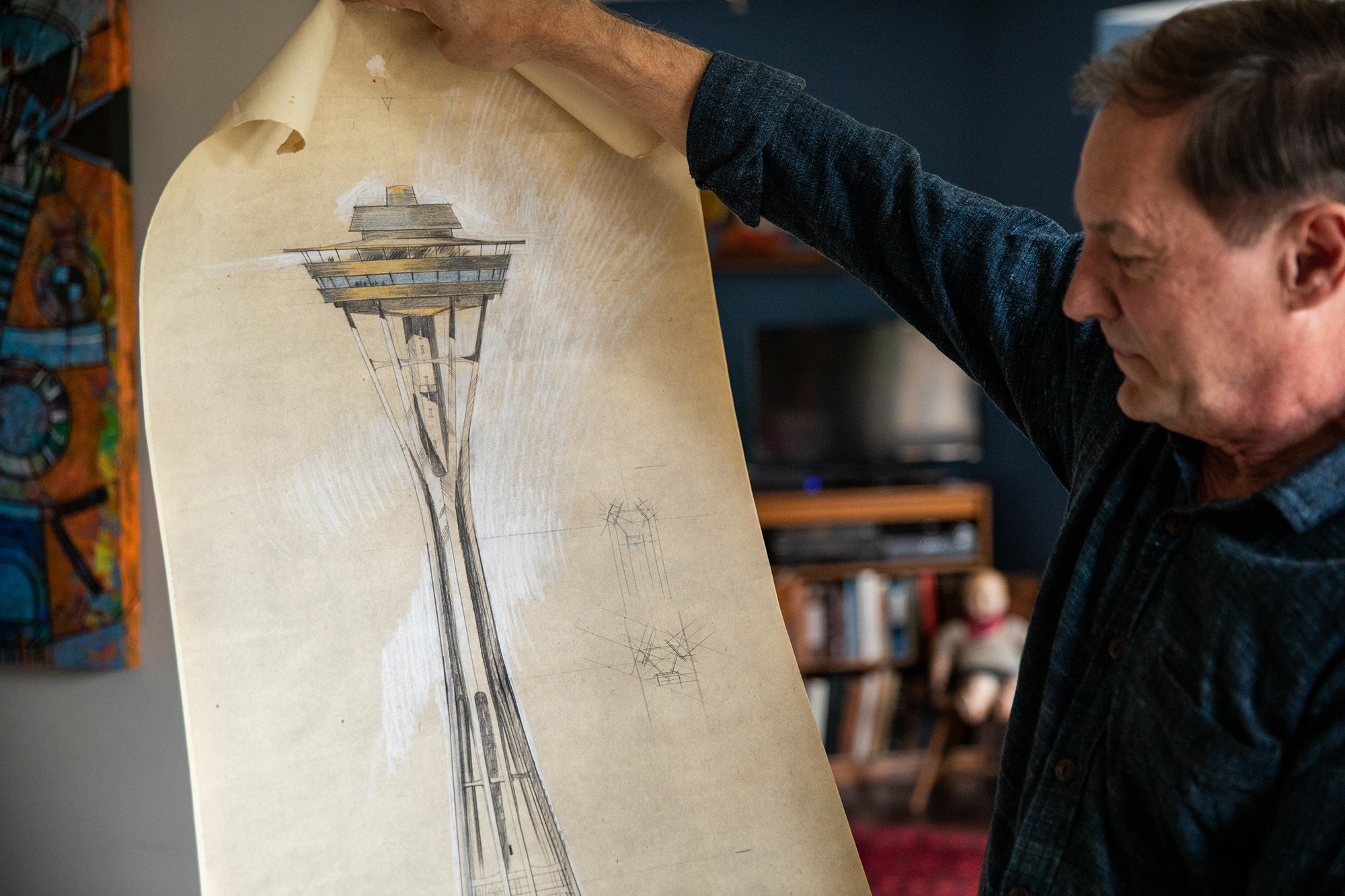 Peter Steinbrueck unrolls a drawing of the Space Needle by his father Victor Steinbrueck in his home on Friday, June 10, 2022. (Amanda Snyder/ Crosscut)

Construction commenced in the spring of ’61 and was well advanced by September of that year. A year after the unveiling of the Needle concept and well into the construction, Lou Guzzo, then a cultural columnist for the Seattle Times, wrote a column, “Needle, Needle, Who Designed It?” The article suggested that Steinbrueck was the unsung author of the design, though he was working for the Graham firm, which got formal credit. Graham and his firm pushed back hard: It was a collaboration of many architects, they insisted. Steinbrueck was only one of many Graham architects who contributed, and a freelancer at that.

Thus started a feud between Graham and Steinbrueck that was more than a simple disagreement or media spat, but one that threatened to go to court. In December of 1961, as the ironworkers at the Needle were topping off the tower, Jack Graham was filing a “violation of professional ethics” complaint against Steinbrueck with the Northwest chapter of the American Institute of Architects (see below).

At a time when people were readying to celebrate the fair and the then-obscure port city of Seattle was about to reap the benefits of national and international publicity, the symbol of the fair was caught in a nasty tug-of-war over who deserved credit — but the depth of the resulting resentments over credit never fully made it into the popular press. 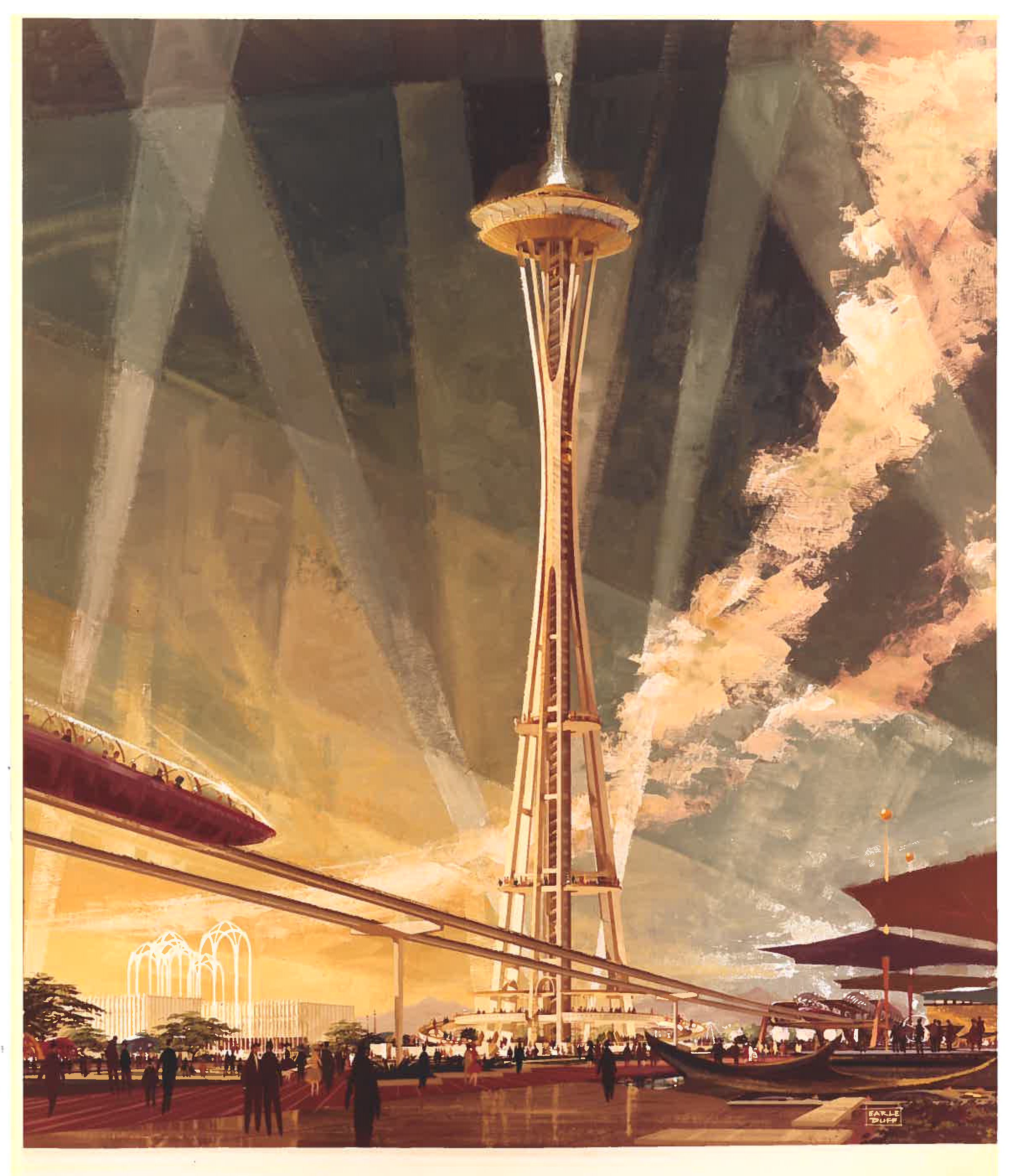 An illustration featuring the Space Needle and monorail from the 1960s found in Victor Steinbrueck’s personal files. (Courtesy of Peter Steinbrueck)

It is all there in the recently discovered personal files. Newspaper clippings, Steinbrueck’s notes, ethics charging papers and disputed timelines in the files show a war over credit. They also suggest a quiet truce was eventually reached in early 1962. And while nothing appears to have come of Graham's complaint, the battle over reputation and credit formed the basis of resentments that continued for decades in the architectural community.

Indeed, the authorship of Seattle’s iconic Needle remained unsettled and rumored for half a century. Different claims of who deserved credit found their way into print. These cellar paper records, which will soon be donated to the University of Washington, confirm what has since become well known; that the final design of the Needle’s tower was indeed Steinbrueck's, though it was a collaborative process with Graham the ultimate decision-maker. More importantly, though, they offer a complicated view of the creation of Seattle’s “Eiffel Tower” and the stakes for those involved. 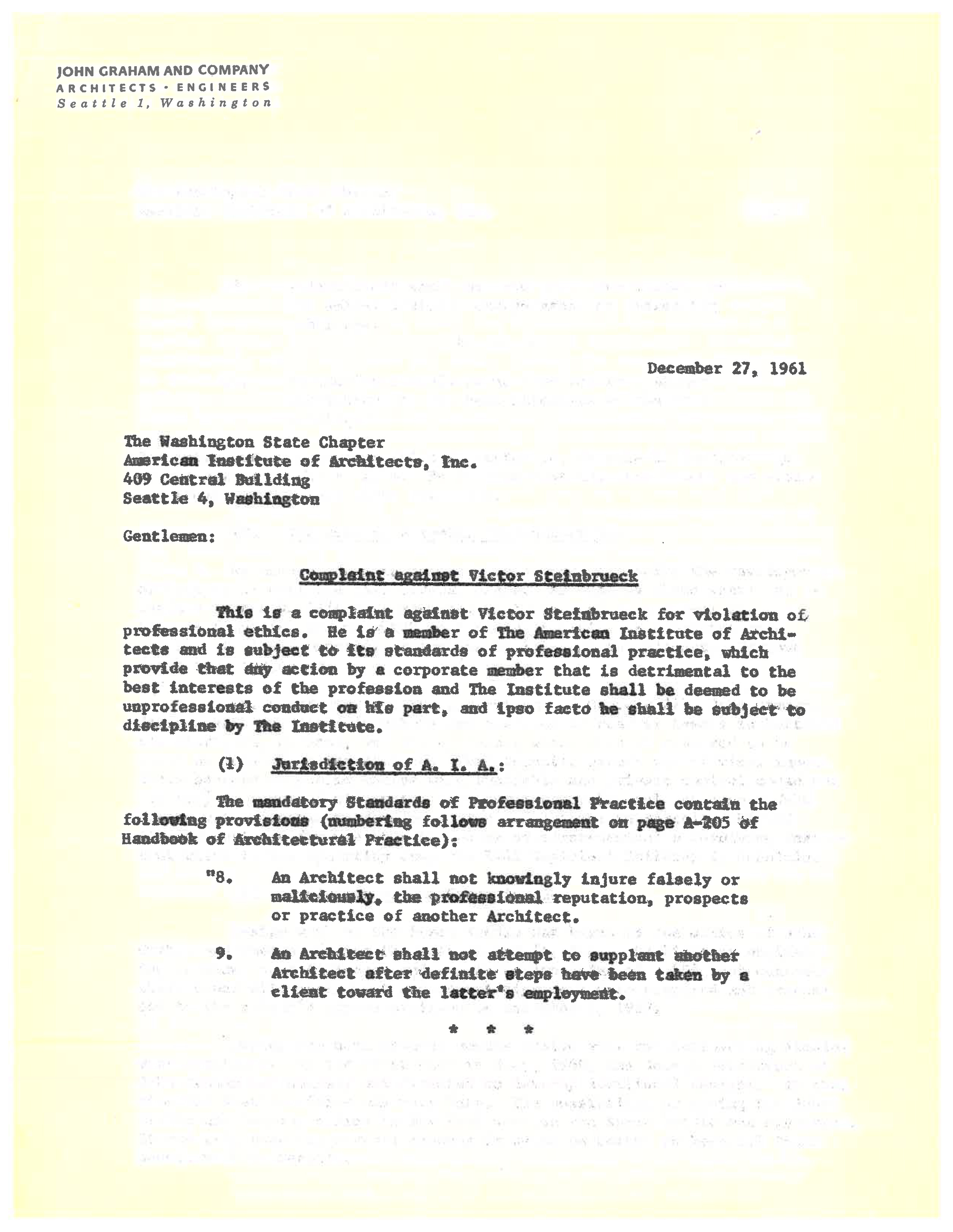 A complaint filed in 1961 by John Graham and Company architecture firm to the Washington State Chapter of the American Institute of Architects against Victor Steinbrueck for statements he made taking credit for the design of the Space Needle. (Courtesy of Peter Steinbrueck) 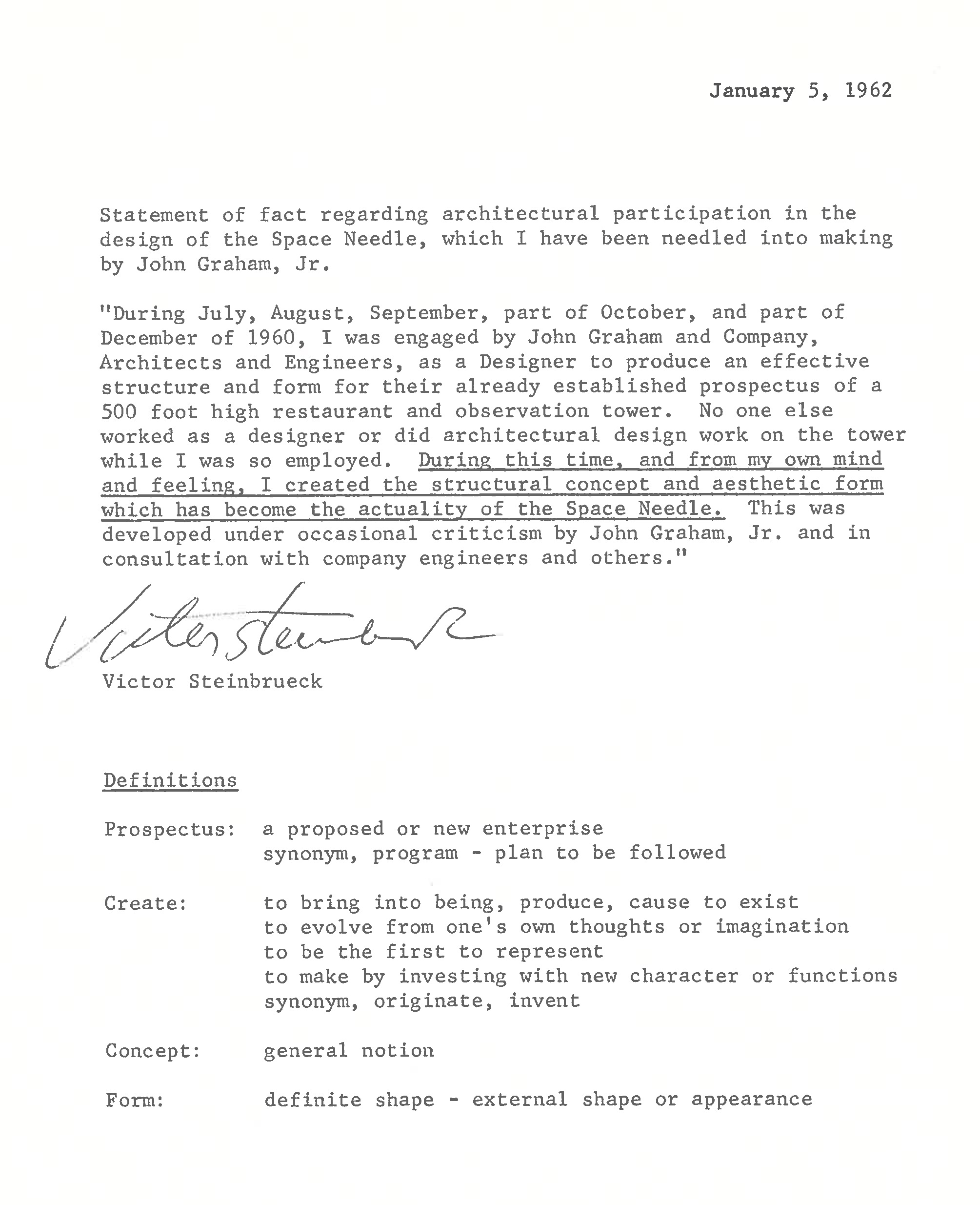 A 1962 letter from Victor Steinbrueck addressing a controversy over who was responsible for the design of the Space Needle. (Courtesy of Peter Steinbrueck) 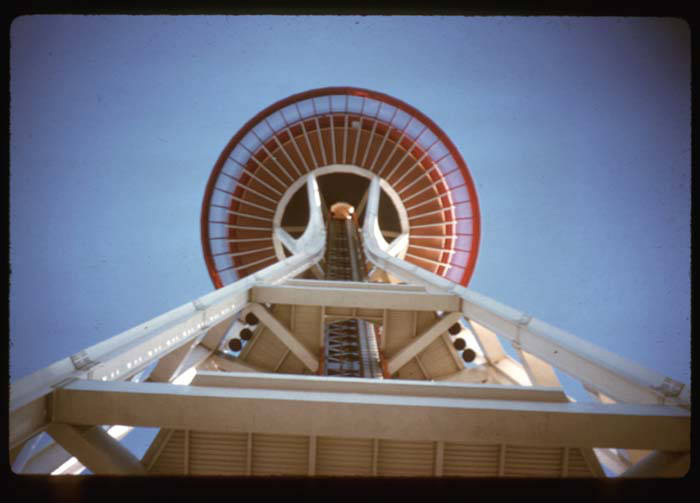 View of the Space Needle, looking up from the base, 1962. (Robert Callaway, courtesy of MOHAI)

Stay tuned for more discoveries from The Steinbrueck Files. Episodes, essays and more photos detailing Steinbrueck's role in preserving Pioneer Square and Pike Place Market will be released each Wednesday for the next two weeks.