Podcast | How Pioneer Square was almost wiped off the map 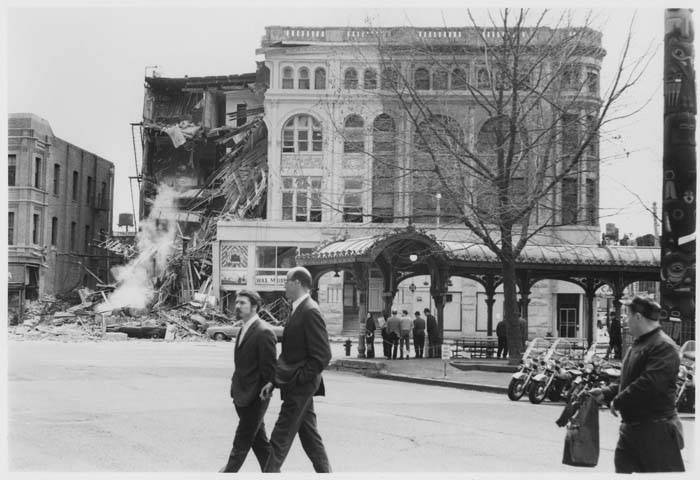 In the mid-1960s, Seattle wasn’t known for historic preservation. Many believed that in a city so young and so forward-looking — that had progressed from log cabins to the Space Age in its 100 years — there was nothing historic worth saving. Indigenous history was largely ignored, obliterated or acknowledged in “totem poles” that did not reflect cultures of the region's Coast Salish tribes.

Spurred by the federal government, cities across the country with more history than ours were ripping up neighborhoods under the banner of "blight" and tearing down historic housing to make room for freeways. Seattle’s downtown business community was eager to join that trend.

One person who was interested in preservation was architect Victor Steinbrueck. He grew up in Seattle and taught at the University of Washington where he had attended architecture school. He valued bustling urban areas with character and he had an egalitarian point of view.

That perspective is found in many of the half-century-old files that were recently discovered in Steinbrueck's former Eastlake home. Those files, which are the subject of this week’s episode of the Crosscut Reports podcast, also reveal in greater detail Steinbrueck’s fight against so-called urban renewal and the lengths he was willing to go to preserve Seattle’s history.

The places in town that embodied our city’s early history were Skid Road and Pioneer Square, where the city was born, burned and rebuilt — and that 1890s rebuild was still largely intact, if also run down, by the middle of the 20th century. And in the mid-1950s, Steinbrueck produced a development concept project for Pioneer Plaza that would have preserved that history. He won a prize from the Junior Chamber of Commerce for his work, which was submitted to the city for consideration.

The 1954 plan wasn’t acted on. It wasn’t until the late 1950s that preservation of Seattle’s “first neighborhood” popped up on the civic radar. Architect Paul Thiry, an eminence in Seattle’s modern architecture, encouraged preservation of the Square in a 1958 story in the Seattle Times, still a few years before the alarm bells rang that the district was in grave danger. But post-war Seattle was gearing up to modernize.

The Square was run down, many buildings remained unimproved and neglected, and some historic structures were starting to be demolished, such as the old Seattle Hotel at Second Avenue and Yesler Way which was torn down in 1961 and replaced with the “sinking ship” parking garage. Another motivating event was the construction of I-5 through the heart of downtown. Thousands of homes were demolished, eliminating affordable housing and historic structures, and dividing Chinatown, First Hill, Cascade and Capitol Hill from adjacent neighborhoods. 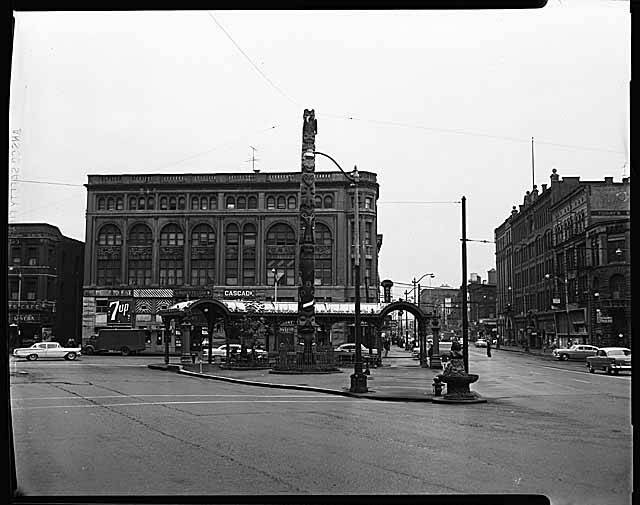 Victor Steinbrueck, described in the media as a “lonely voice” for preservation, was especially upset by the demolition of the 1881 Kalmar Hotel at Sixth Avenueand James Street, the only pioneer-era hotel left standing in the city. It was razed in April, 1962, the same month the Seattle World’s Fair opened.

Far worse was in the proposal pipeline. In 1963, a report from the Central Business District group outlined a plan for remaking Seattle with ring roads — inner and outer arterials and highways — surrounding downtown. They would be accompanied by the construction of tens of thousands of new parking spaces, lots and garages. Pioneer Square and Chinatown were to be bisected by two new major ring-road connecting arterials. The existing waterfront and Pike Place Market would be largely demolished and redeveloped, and multiple urban malls would sprout downtown. Despite pedestrian and transit improvements, it was a very auto-centric vision at the expense of existing communities. 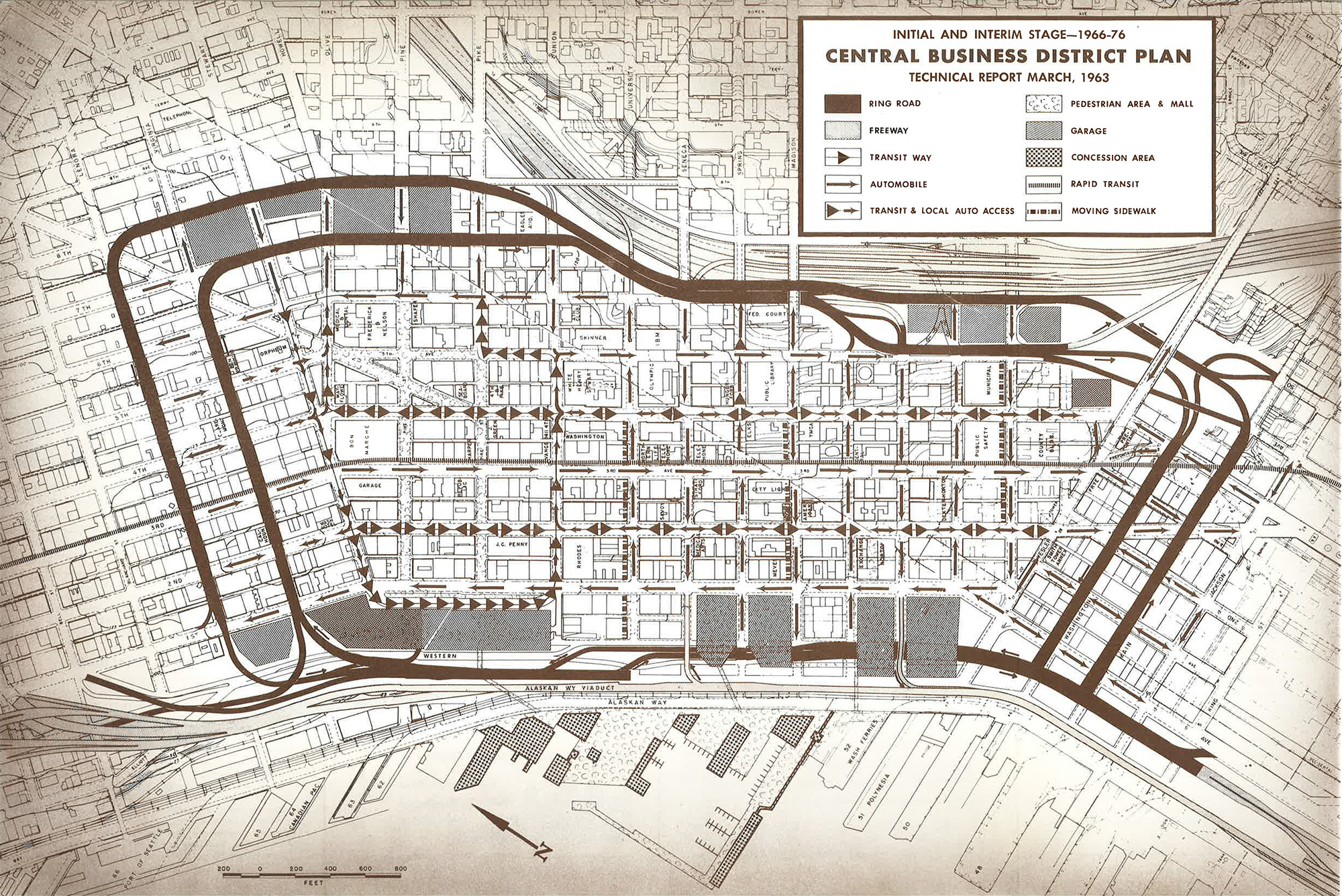 A map of the Central Business District Plan found in a “discussion guide” leaflet published in 1963 lays out proposed changes to the downtown Seattle area. (Courtesy of Peter Steinbrueck)

In 1966, John Graham & Co. —  architects of the Northgate Center (later the Northgate Mall) and, with Steinbrueck’s help, the Space Needle — issued its own plan for the massive redevelopment of Pioneer Square, including high-rise commercial buildings and parking garages for a secretive development organization, the Urban Group, headed by prominent businessman Ben B. Ehrlichman — uncle to John Ehrlichman, of Watergate fame.

Steinbrueck and others were galvanized by the threats to low-income communities with historical and cultural significance. But it was also a battle over how decisions were made. These proposals sought to build public momentum to re-shape the city to serve strictly commercial needs. Steinbrueck argued for more inclusive approaches and alternatives being considered. Federal funds for urban renewal fueled the quest for massive redevelopment, but Steinbrueck questioned whether “renewal” needed to mean erasing existing communities. 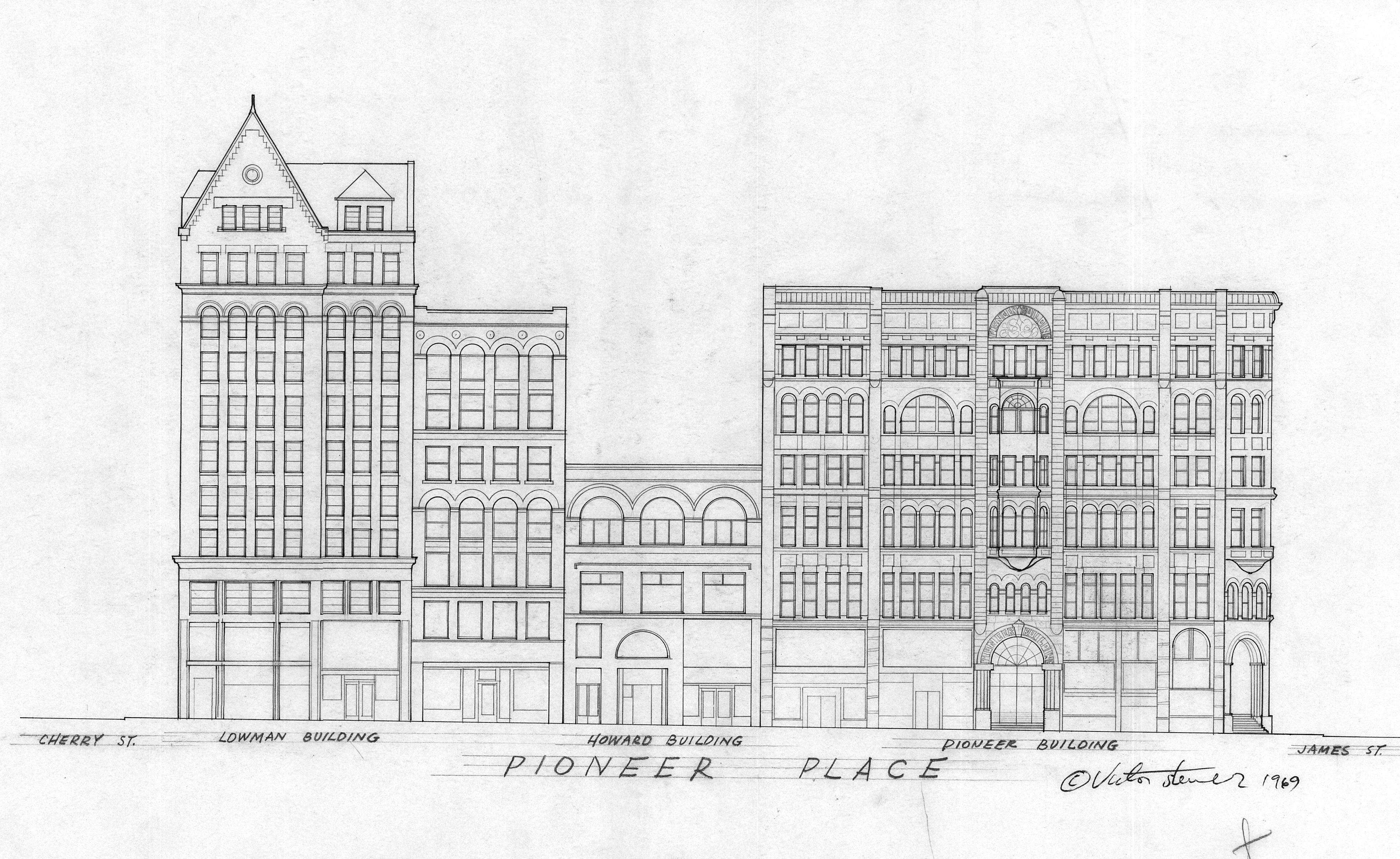 A sketch of Pioneer Square, First Avenue, street elevation, east side between Cherry and James Streets, 1969 by Victor Steinbrueck. (Courtesy of University of Washington Special Collections)

The newly discovered Steinbrueck cellar files include documents outlining city proposals and the architect's real-time critiques, in formal response, in newspaper clippings and correspondence. For example, in answer to the proposal from Graham and the Urban Group, he wrote about preservationist values that included not just history for its own sake, but the people who lived in the neighborhoods:

“[S]ome civic-minded idealists have had a vision of the time when government care would provide aid and appropriate environment for the Skid Road inhabitants along with a restoration project which would bring old buildings back into the vital life of the city.” The Graham proposal, Steinbrueck said, showed “no consideration for Skid Road inhabitants.” He argued, “[T]he proposal as outlined is an inhuman, sterile, brutal project with vast parking lots (everything between Alaskan Way to Fifth Avenue, between Washington and Main streets) and four colossal skyscrapers set atop huge ‘super block’ parking garages. The existing traditional street pattern is violently violated.  The city must accept the responsibility to realistically and humanely solve the sociological problems of the Skid Road residents. It will not solve itself and changing the character of the Skid Road is not a solution.” 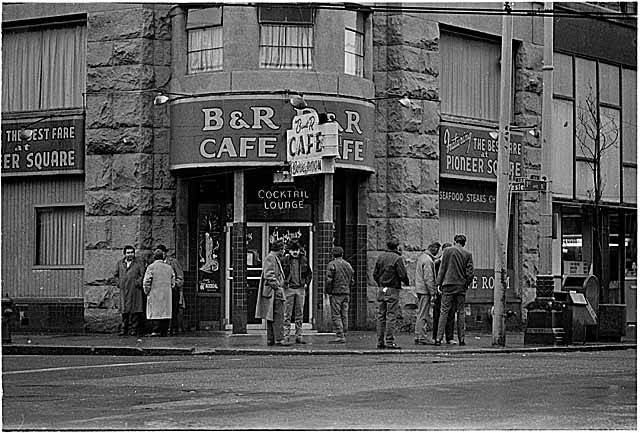 Men outside B & R Cafe, Seattle, 1969. The B & R Cafe was typical of "Skid Road" dives, located on the southeast corner of First Avenue S. and Yesler Way, in the Cascade Hotel. This building collapsed during an attempted renovation in the 1970s. (Courtesy of MOHAI)

Some scoffed. Columnist Don Duncan, writing in the Seattle Times, questioned whether Skid Road and Pioneer Square were worth preserving.

“There is again talk of urban renewal in the area. As usual, well-meaning voices cry out about ‘preserving our history.’ Perhaps we should have preserved the packing-crate hovels of our Hooverville too.”

Steinbrueck’s files take one to the front lines of the war of words, world views and process to save Pioneer Square from massive demolition and highways expansion. They reveal Steinbrueck’s passion and vision, his arguments and tactics, and surprisingly reveal his willingness to put his money where his mouth is: Turns out he had attempted to buy the Merchant’s Café building to restore it “as an example to the rest” to demonstrate how preservation and real urban renewal, not demolition, could revitalize the area.

Today, we can’t imagine Seattle without Pioneer Square. It has been through many phases in the last 50 years. But its survival was not inevitable. It lives on as the result of a siege of unequal forces that sought to shift urban priorities and were stopped in their tracks by those, like Steinbrueck, who saw the city in a different, and more inclusive, way. 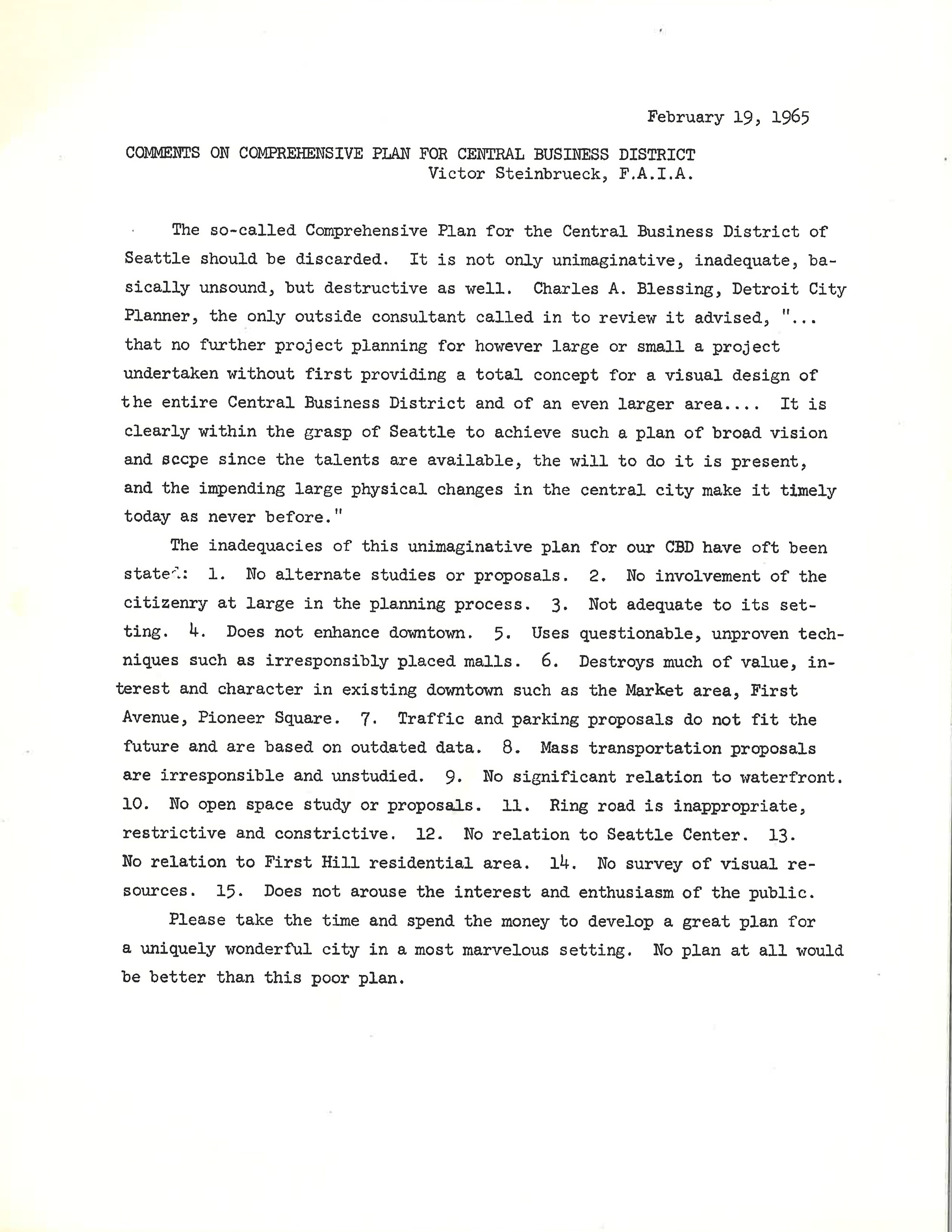 A document titled “Comments on Comprehensive Plan for Central Business District” by Victor Steinbrueck dated February 19, 1965. In it, Steinbrueck lays out his critiques of the proposed plan. (Courtesy of Peter Steinbrueck) 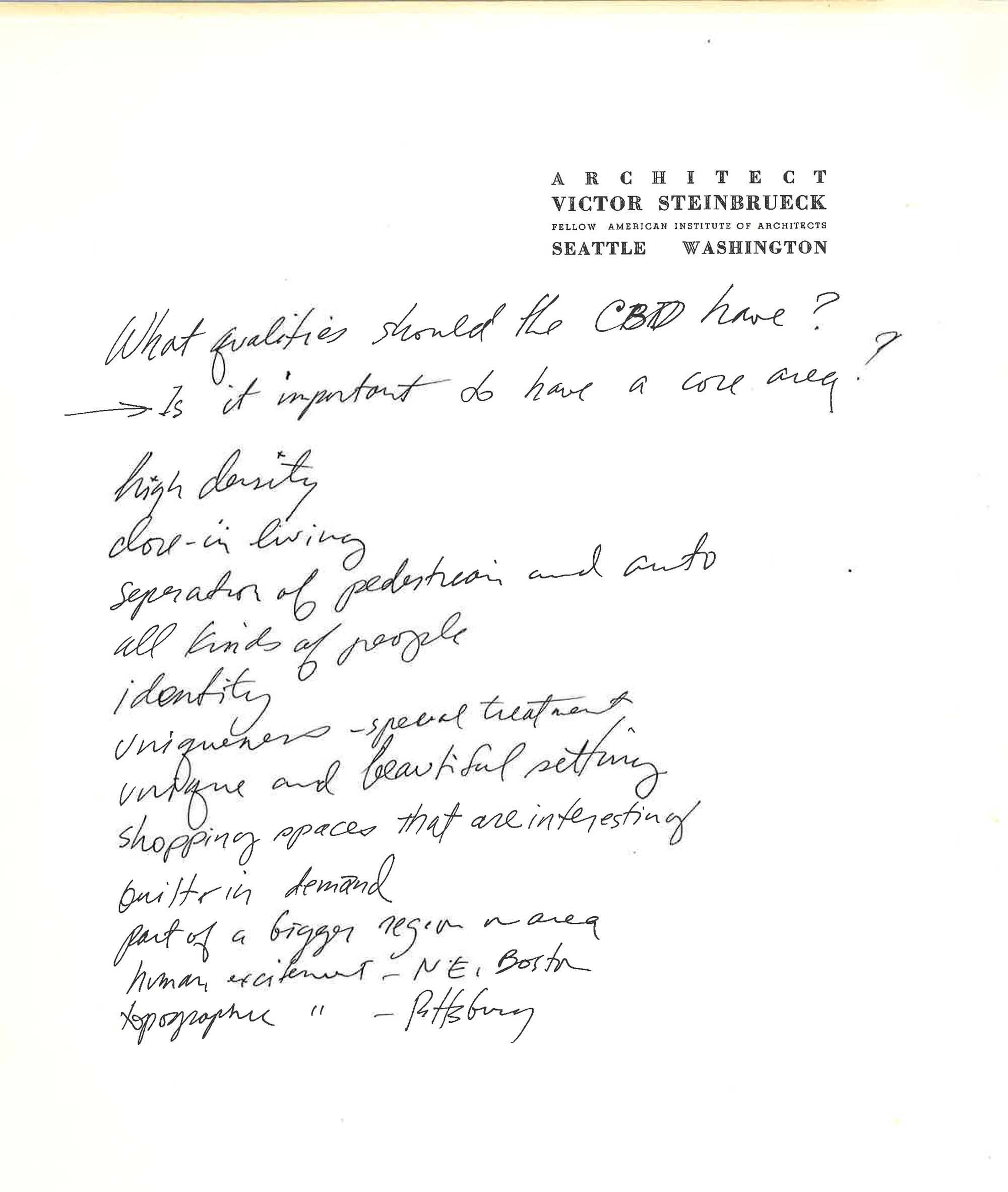 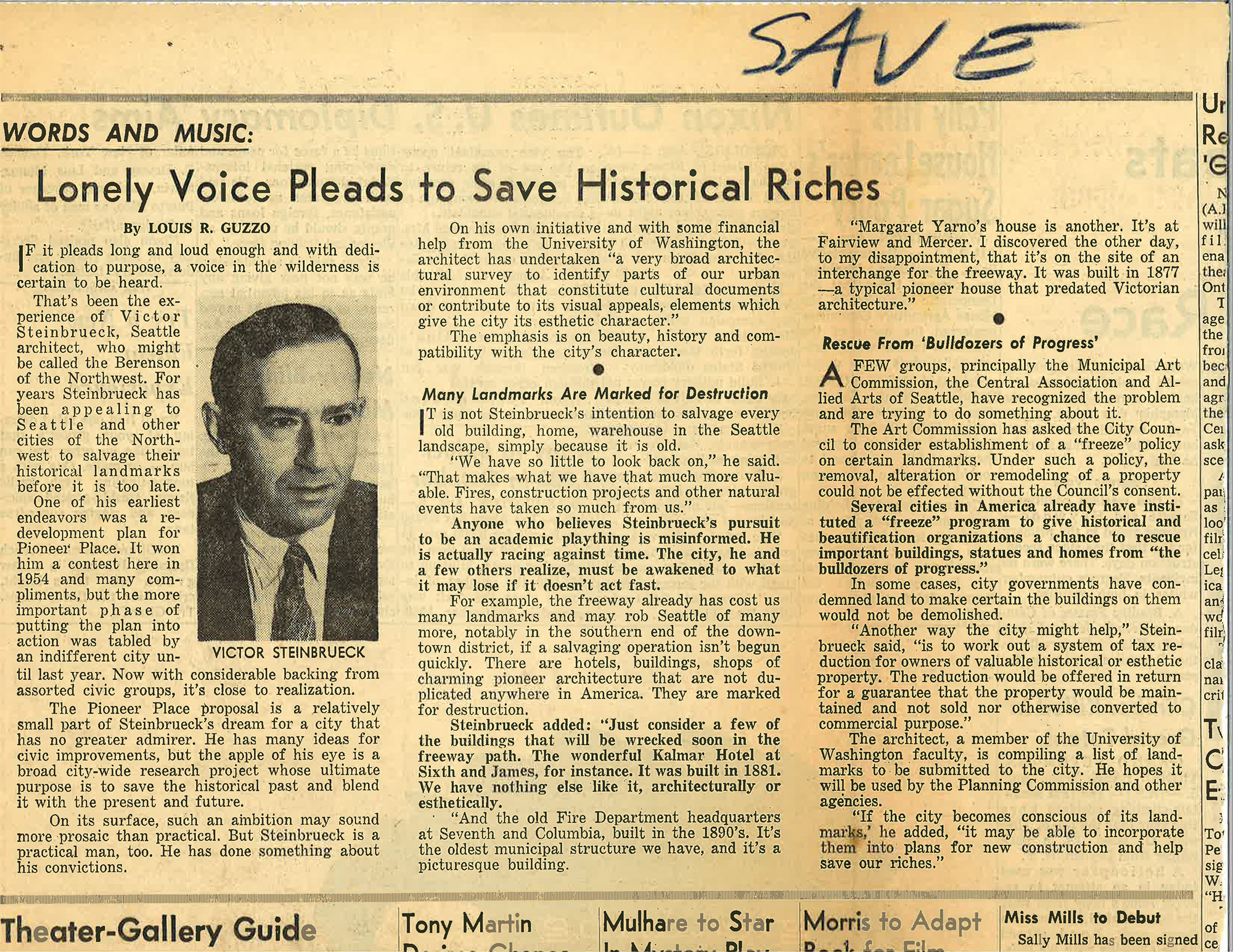 An August 5, 1960 article in the Seattle Times by Louis Guzzo detailing Victor Steinbrueck’s efforts to preserve and redevelop the Pioneer Square neighborhood. (Courtesy of Peter Steinbrueck) 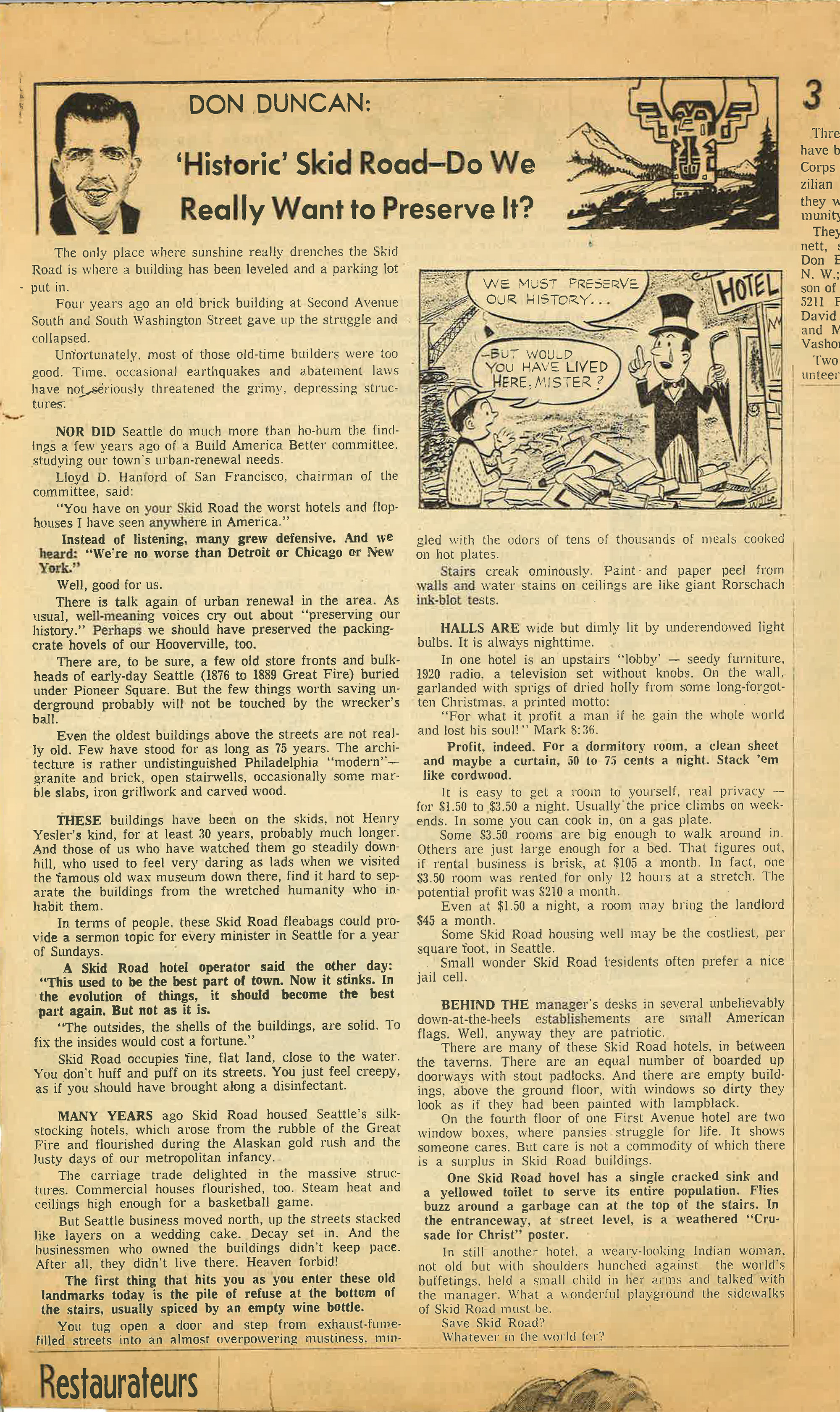 A column in the Aug 23, 1966 edition of the Seattle Times by Don Duncan questioning the worth of preserving the ‘Skid Road’ Pioneer Square district found in the files of Victor Steinbrueck. (Courtesy of Peter Steinbrueck) 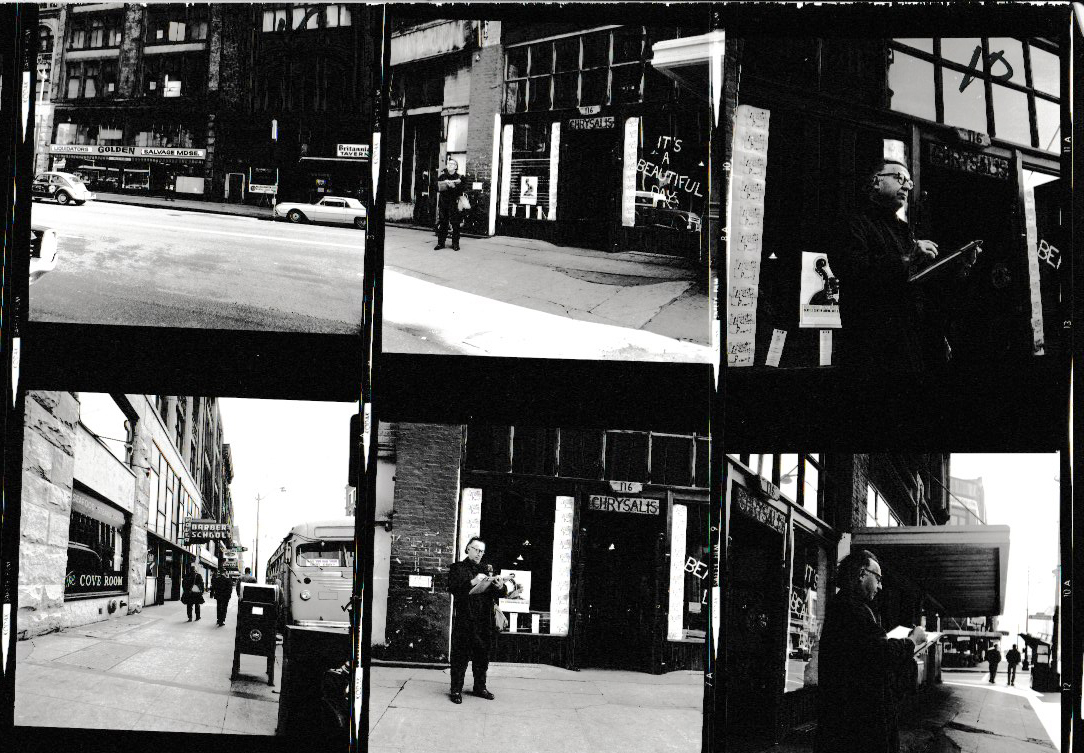 Stay tuned for the final episode of The Steinbrueck Files, detailing Steinbrueck's role in preserving Pike Place Market. It will be released next week.