Podcast | How the battle to save Pike Place Market changed Seattle 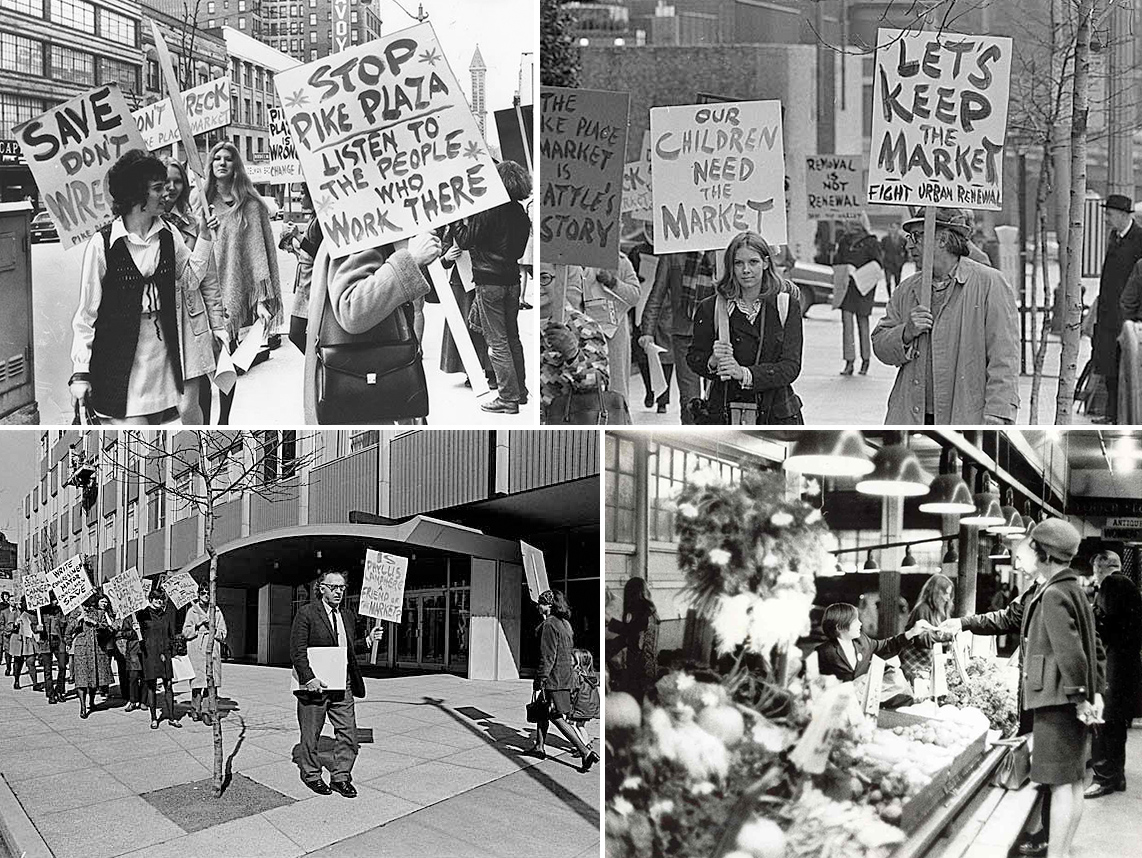 From the very beginning, the Pike Place Market was a hit. Opened in August 1907, it had been designed to efficiently deliver local products directly from farms to a growing city at reasonable prices. Before the Market, local farmers in the Duwamish Valley, on nearby islands like Vashon and Bainbridge, and elsewhere in the Puget Sound area were being exploited by the waterfront warehouses that controlled their income by charging commissions and that jacked up the price of produce. The Market offered a public option, a work-around to profiteering for the “producers.”

Within a couple years, hundreds of thousands of people were visiting each month. Copycat markets popped up to compete. The Market grew and flourished. It expanded. Vendors and private business cropped up in and around it. It was colorful, a community agora that served everyone, especially low-income waterfront and downtown dwellers.

The Market became famous for its character and color. Poets like Allen Ginsberg and Richard Hugo wrote about it, artist Mark Tobey painted it. As Seattle grew up and changed, the Market came to possess a kind of organic, unique charm, as did the surrounding neighborhood, which included the quintessential seaport Skid Road with its pawn shops and taverns.

But after 60 years, it had become frowsy, challenged by supermarkets and a downtown in need of “revitalization.” Urban planners began to eye redevelopment — urban renewal. What had been a charming homegrown institution suddenly became “blight,” a threat to the upscaling central downtown, which itself was being challenged by the growth of suburban sprawl and shopping malls.

The battle against that redevelopment is what architect and activist Victor Steinbrueck is most known for — as “the man who saved the Market.” It took the efforts of many, but Steinbrueck was uniquely able to make the case that the Market, and its urban context, should be protected.

The story is well known, but newly discovered personal records of Steinbrueck’s provide a previously untold part of the story. The files, which are the subject of this week’s episode of Crosscut Reports, contain numerous first-hand documents which reveal strategies, arguments and changes in mood and tactic.

Steinbrueck did not start the battle. Seattle City Councilmember Wing Luke first suggested a public district be created to protect the Market in 1964. In response, a citizens’ group formed to protect it. A private volunteer group, Friends of the Market, co-chaired by Steinbrueck and a civically active attorney, Robert Ashley, was launched to preserve the Market. They started a bookshop to sell Mark Tobey’s book on the Market and Steinbrueck’s 1962 book Cityscape, featuring sketches that captured the city’s unique urban character. Steinbrueck later created a new book, Market Sketchbook, that captured the magic of the place. These were part of a public education effort to push back against urban renewal at the Market, which in planners’ and developers’ terms meant essential erasure. 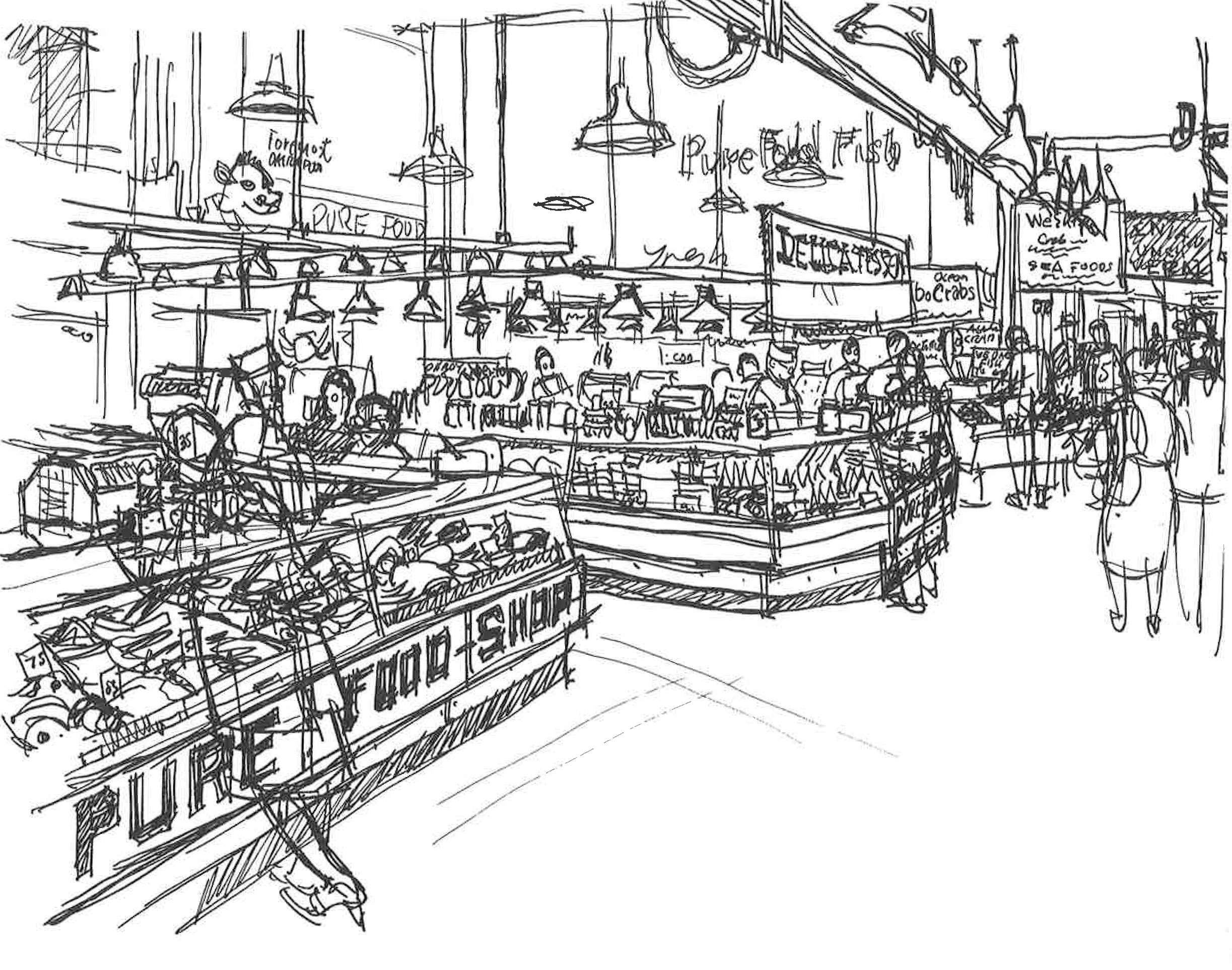 A sketch of Pike Place Market from the early 1970s by Victor Steinbrueck. (Courtesy of Peter Steinbrueck)

By 1968 the city issued a plan to bulldoze and radically alter the Market. The Friends demanded alternatives and more process transparency. They rallied the public to protect the Market from complete or even partial demolition.

“As the Market goes, so goes Seattle,” Steinbrueck declared. The files back up that sentiment, allowing us to look over the shoulder of the man who headed the successful effort — against virtually the entire establishment of the city — to find a new way forward for the Market. They reveal his thinking, planning and tools. Virtually everything we love about the Market was saved in this moment.

For example, a yellow pad dated “1969” contains handwritten notes for organizing the initiative campaign to save the Market from the city’s plans. One note read:

Circulating petitions and checking distribution of them

Talk to each merchant regarding his stake in urban renewal

Taverns — list…where will they go

Another document, a handwritten draft press release from 1971, outlines plans for protesters to picket the businesses of major private backers of the Market redevelopment “syndicate.” The redevelopment would be done jointly with city and private developer involvement plus federal “renewal” funding. G. John Doces of Doces furniture and Lamont Bean of Pay ’n Save and Ernst are the retail owners targeted for protest. 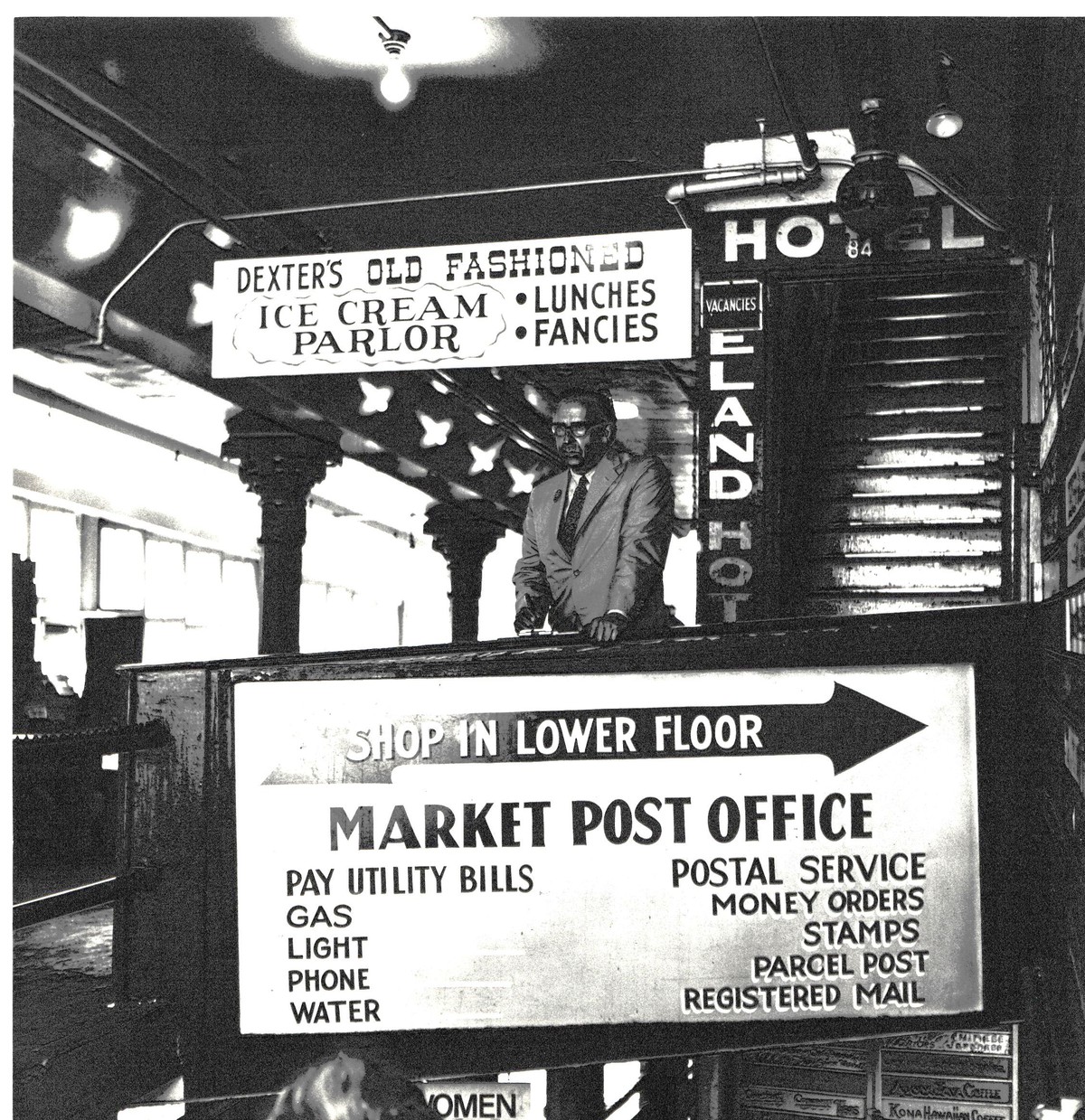 A photo of Victor Steinbrueck at the Pike Place Market taken in the early 1970s by Mary Randlett. (Courtesy of Peter Steinbrueck)

And there’s a broadside poster that ramps up rhetoric in almost revolutionary style, pleading with citizens to attend a City Council meeting at which the Market’s fate will be decided:

“The central business MERCHANTS OF GREED are using URBAN RENEWAL to MURDER THE MARKET: by strangulation and rape thru demolition and disruption of the entire area…by taking the heart of the market to give life to their swank hotel and luxury apartment plaza development, by costly changes in that remaining market core to make it palatable to their plush plastic plaza as a phony and nostalgic vestige of the past…”

A vote to save the Market went on the ballot in November 1971 and passed overwhelmingly, rejecting the city and business community’s plan. In the half-century since that victory, keeping the Market vital has been an ongoing — and evolving — task.

That half-century has also been dominated by a new kind of Seattle governance that was more grassroots and consensus-based than top-down. This way of doing things would come to be called the Seattle Process, and would later be derided by some for slowing and stalling civic business. But at its core, the process is born of the same ethos that Steinbrueck brought to his work.

The documents we have examined in this trilogy of podcast episodes have helped illuminate that ethos and revealed how it has shaped not only the Market, but Pioneer Square and the Space Needle as well. They show the contemporaneous thinking, passion, tactics and conflicts that went into saving Seattle’s “soul” and made the Market battle in particular iconic in our civic history. 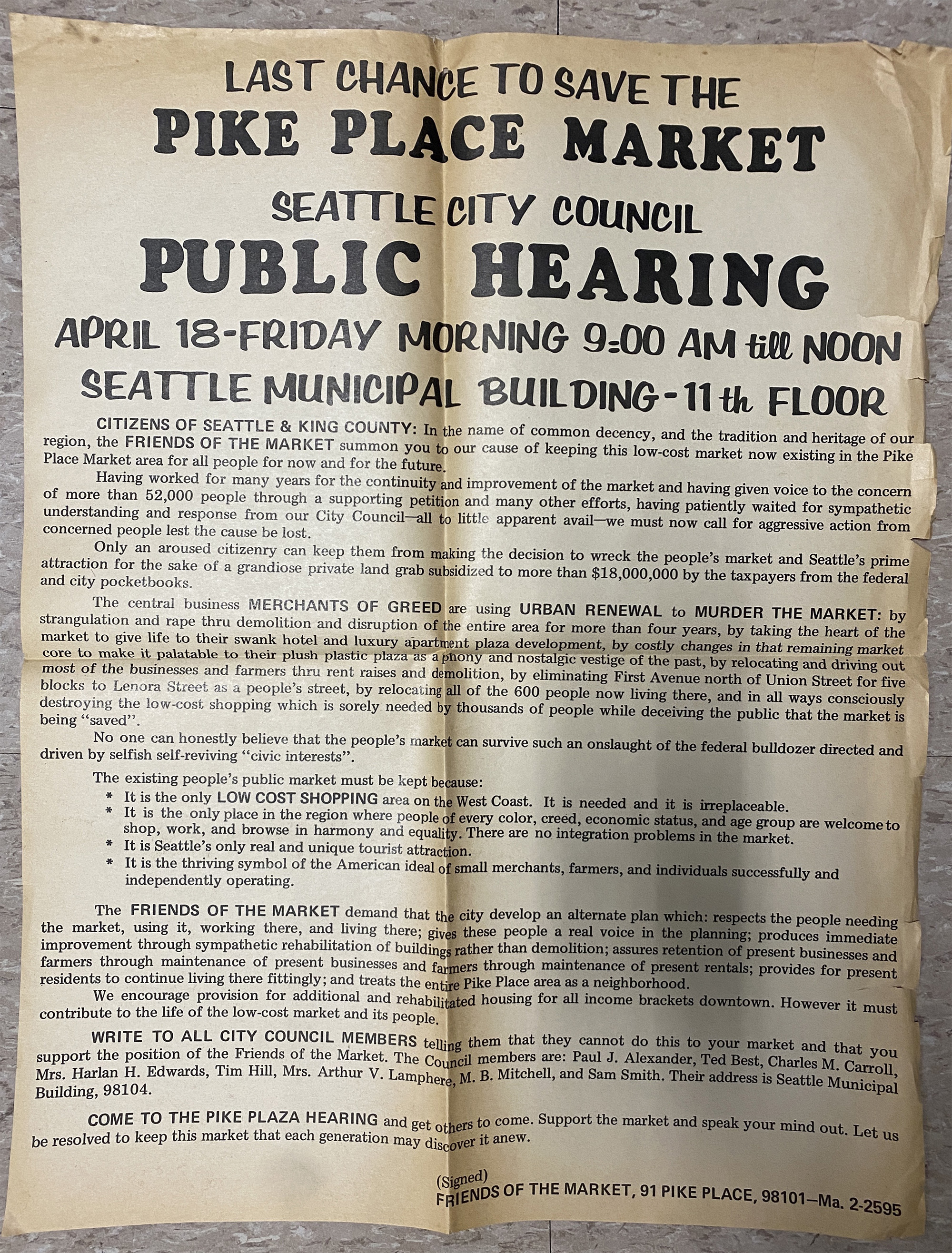 A large flyer, made by Friends of the Market, asks people who want to save the Pike Place Market to attend a Seattle City Council public hearing. (Courtesy of Peter Steinbrueck) 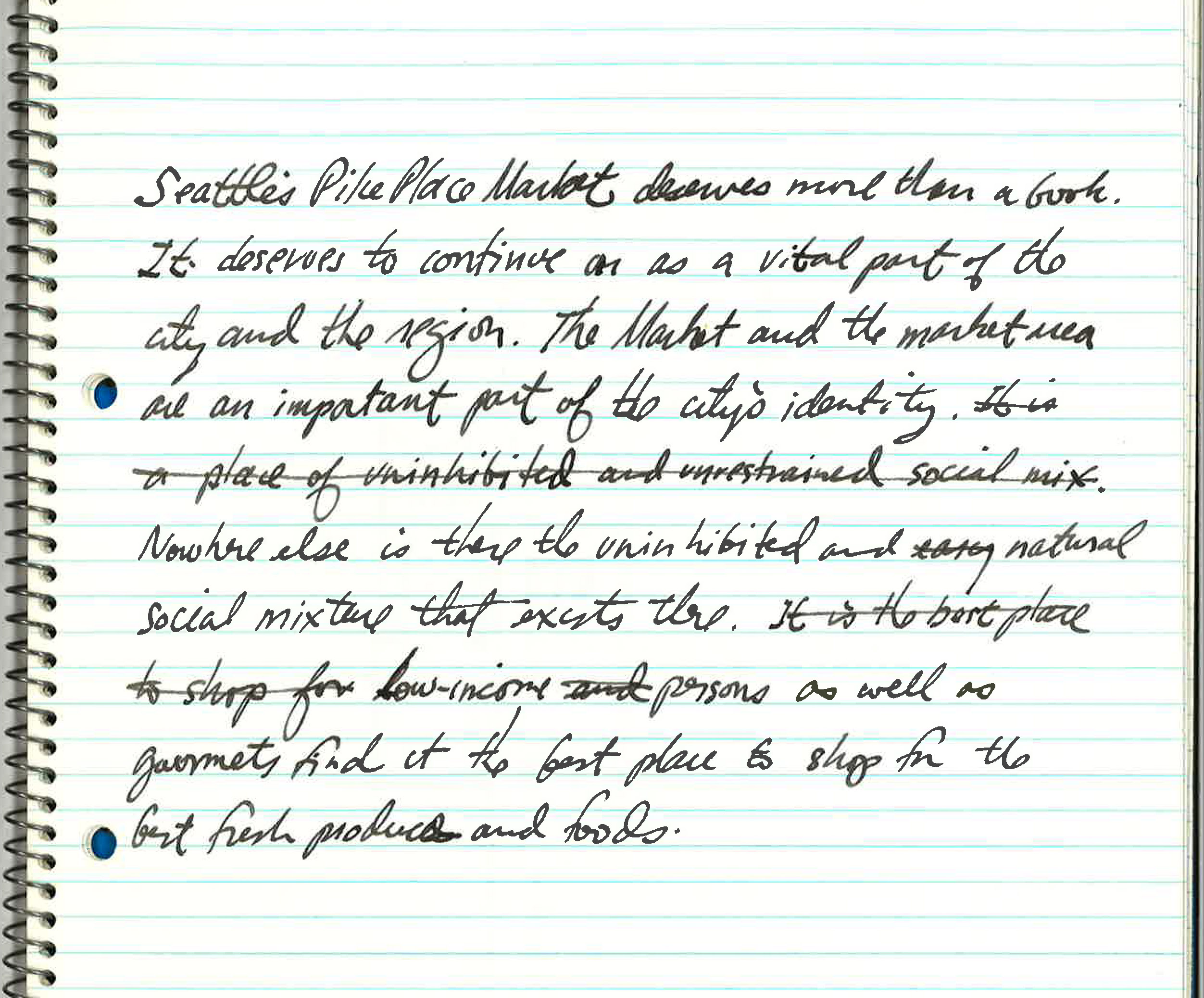 “Seattle’s Pike Place Market deserves more than a book. It deserves to continue as a vital part of the city and the region,” Victor Steinbrueck writes in one of his many notebooks. (Courtesy of Peter Steinbrueck) 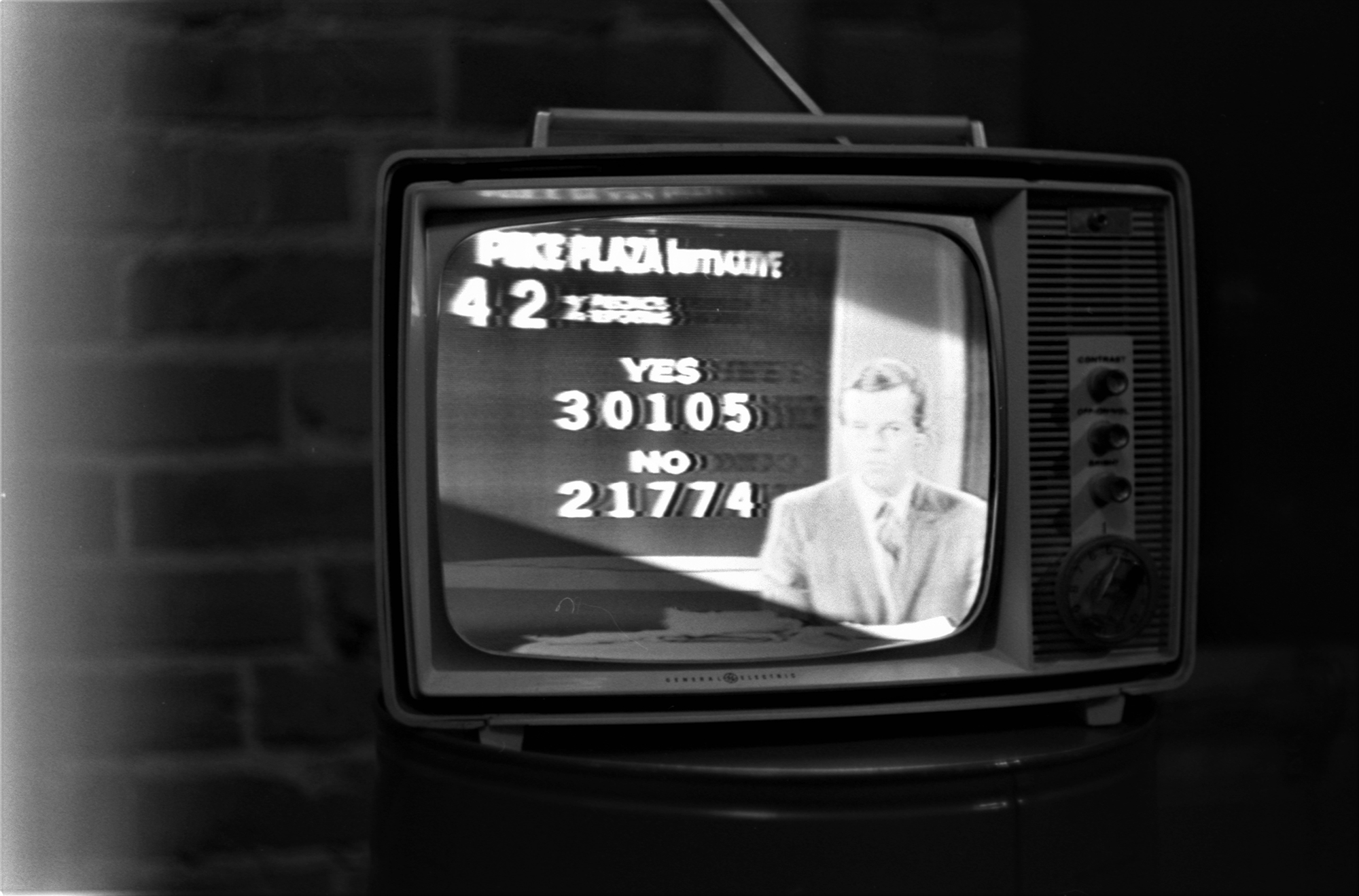 A photo of a TV screen showing 42% of precincts reporting as ballots are counted for the 1971 Pike Plaza initiative, taken by a young Peter Steinbrueck at a Friends of the Market election-night party. The Initiative, which was passed by voters on November 2, 1971, called for the City to preserve, improve and restore the Pike Place Market by creating a Pike Place Market Historical District. (Courtesy of Peter Steinbrueck)