It will be months before a successor is named, but there is a short list of likely candidates. 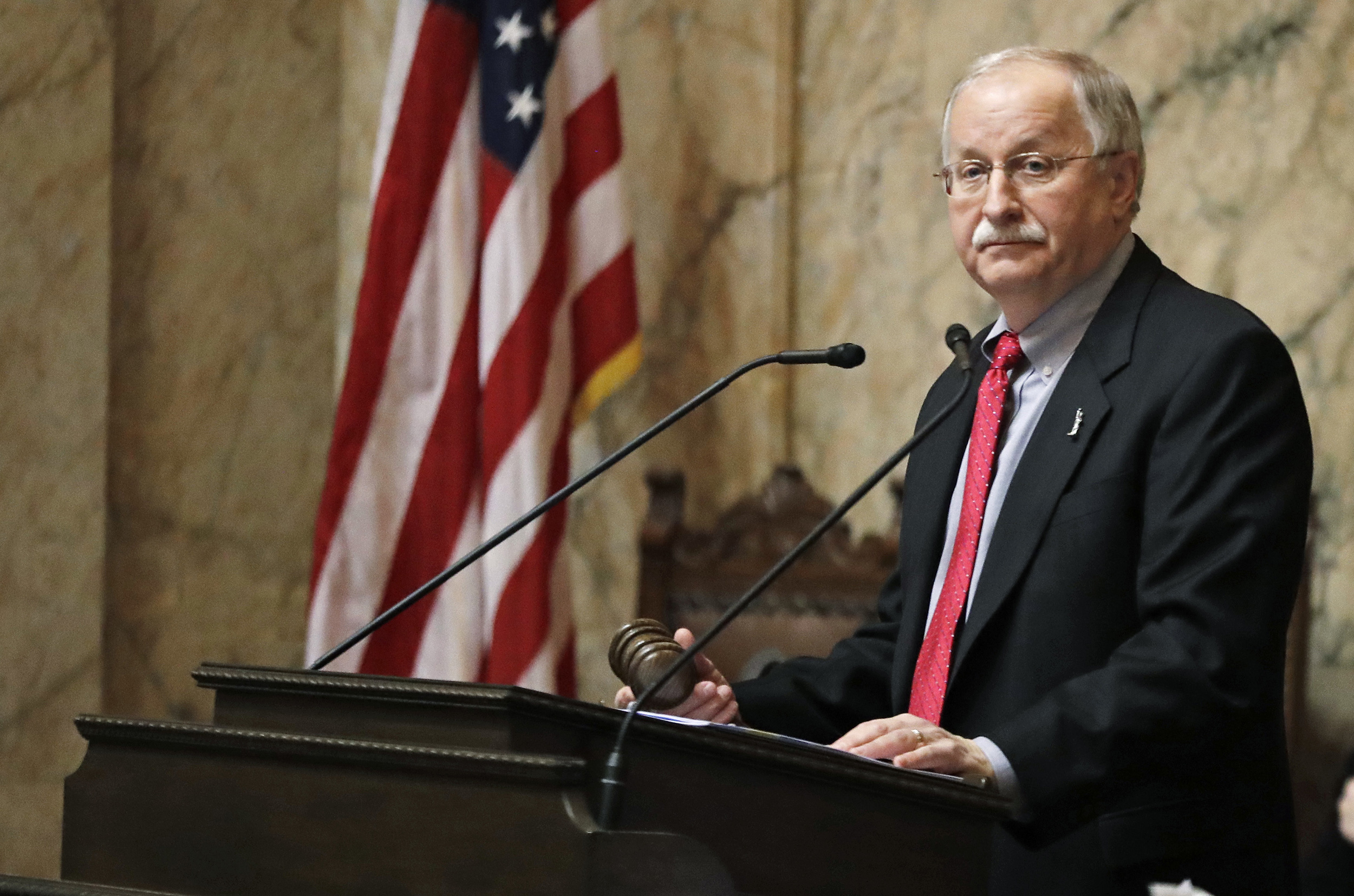 House Speaker Frank Chopp holds the gavel while presiding over the House, Monday, Jan. 8, 2018, in Olympia, Wash., on the first day of the 2018 legislative session. (AP Photo/Ted S. Warren)

In six months, Frank Chopp will finish his 21st year as Washington House speaker, ending the longest such run in state history.

“I just thought it was the right time,” said the coal miner’s son who, at 65, was just elected to his 13th two-year term as state representative for the most liberal chunk of Washington state — Seattle’s Capitol Hill, the University District, Wallingford and Fremont neighborhoods.

At a Wednesday press conference in Olympia, the Democratic leader spoke about his plans to step down, which he had announced Tuesday afternoon in an internal caucus meeting. He joked that he had thought about stepping down almost every year since he was elected co-speaker in a House that was split 49-49 between Democrats and Republicans. He became sole speaker in 2002 when the Democrats won a majority of the House, which they have not relinquished since.

But he never felt burnt out on the job, he said. “I’ve always been hyperactive.”

For the 2018 legislative session, Chopp led a House with a 50-48 Democrat majority, his narrowest majority since 2002. Democrats picked up at least seven seats in the November election and currently stands at a 57-40 majority with the 98th House seat in Whatcom County facing a recount after a razor-thin result.

Chopp says he is happy to end his tenure in the speaker’s seat with a solid majority in the House. Meanwhile, the Senate  is also firmly in Democratic control.  After losing a November 2017 special election, Republicans ceded control of the chamber they had held, in some fashion, for five years. This year’s general election added to the Democratic majority, setting up a session that will likely be  the party’s easiest, politically, since 2012.

Chopp says he will continue in his role through the session, which begins in January, in order to ensure a smooth transition to a new speaker. That gives other legislators interested in the position enough time to campaign and prepare for it, and it gives a batch of rookie House members some time to scope out potential leaders.

In order to prevent jockeying from dominating the session, the House Democratic caucus will select a new speaker in May, after the 120-day session is over. The new speaker will not become official until January 2020. Consequently, if a speaker is somehow needed between May 2019 and January 2020, Speaker Pro Tempore John Lovick, D-Mill Creek, will fill that post.

While Chopp is giving up his speakership, he says he does plan to run again for his seat in 2020 and continue to serve in the Legislature as a rank-and-file representative, concentrating on specific issues that are dear to him — improving the financial situation of the state’s mental health program, improving college student loan programs, and pursuing more affordable housing.

Chopp’s successor, then, faces the specter of the powerful House member hanging around in the shadows. Chopp downplayed the potentially awkward situation, saying the pool of potential successors is filled with strong personalities. “These people are not shy,” he said.

So far, no one has publicly voiced ambitions to be the new speaker.

The House Democrats have a wide variety of people in leadership positions that could be jump-off points for speaker. House Majority Leader Pat Sullivan, D-Covington, and caucus chairman Eric Pettigrew, D-Seattle, are likely leading candidates.

Chopp has had a distinctive style as speaker — at times energetic, at others low-key; he had the capacity to be both iron-fisted and subtle in dealing with legislators.

Chopp shuns the limelight, believing in empowering and featuring caucus members on specific issues — a leftover practice from his days as a community organizer in Seattle. He often stays away from press conferences featuring the caucus’ leaders, routinely deferring to Sullivan as the face of the caucus to the press. He constantly talks with caucus members and visits politicians all over the state, developing an almost encyclopedic knowledge over the years of all 49 legislative districts, a key to molding legislative strategy to keep the Democrats a majority in the House.

"Frank thinks 15 moves ahead," said Sen. Jamie Pedersen, D-Seattle, in a 2014 interview. Pedersen served with Chopp as a state representative and currently represents his 43rd District in the Senate.

“He’s able to process information at an incredible speed. Frank has a wide bandwidth,” said Spokane Democrat Ormsby in a 2017 interview.

He has picked up a reputation as a behind-the-scenes overlord — seen admirably by his allies and frequently described as sinister by Republican opponents in both the House and Senate. In a 2017 Elway survey of Olympia lobbyists, one anonymous lobbyist wrote that Chopp “operates like a Mafioso lord behind the scenes.”

However, Rep. J.T. Wilcox, newly elected House minority leader and longtime Yelm Republican, said in a written statement: “I admire Frank. He is a link to a time when parties represented both rural and urban communities. I believe Frank has always maintained a statewide point of view and tried to be fair as speaker of the House. On a personal note, I especially appreciate the fact that shortly after I was elected House Republican leader, Frank came out to the farm and visited with me and my family for several hours. I also know that over the years he has reached out to help members, including Republicans, during difficult times.”

Gov. Jay Inslee said in a statement: "There are few who work harder and with more heart than Frank Chopp. He has dedicated his career to lifting people out of poverty and strengthening economic security and opportunity for all Washingtonians.”

Chopp’s family immigrated from Croatia in the early 20th century. His father, who worked in the old Roslyn coal mine at the age of 12, was a union member. Social issues dominated the dinner table, and Chopp always knew he would go into some type of social activism. “We believed in raising everybody up,” Chopp said of his family in a 2017 interview.

Chopp grew up in Bremerton and graduated from the University of Washington before working as a community organizer. Eventually he would become executive director of the Fremont Public Association and that organization — more recently called Solid Ground — helped set up an emergency food bank, a clothing bank and an employment program.

He views his caucus’ greatest achievements during his speakership as the Apple Health for All Act, funding basic education, paid family leave, the legalization of gay marriage, the Voting Rights Act, the Dream Act and numerous infrastructure projects, including about 70 housing projects in the Seattle area.