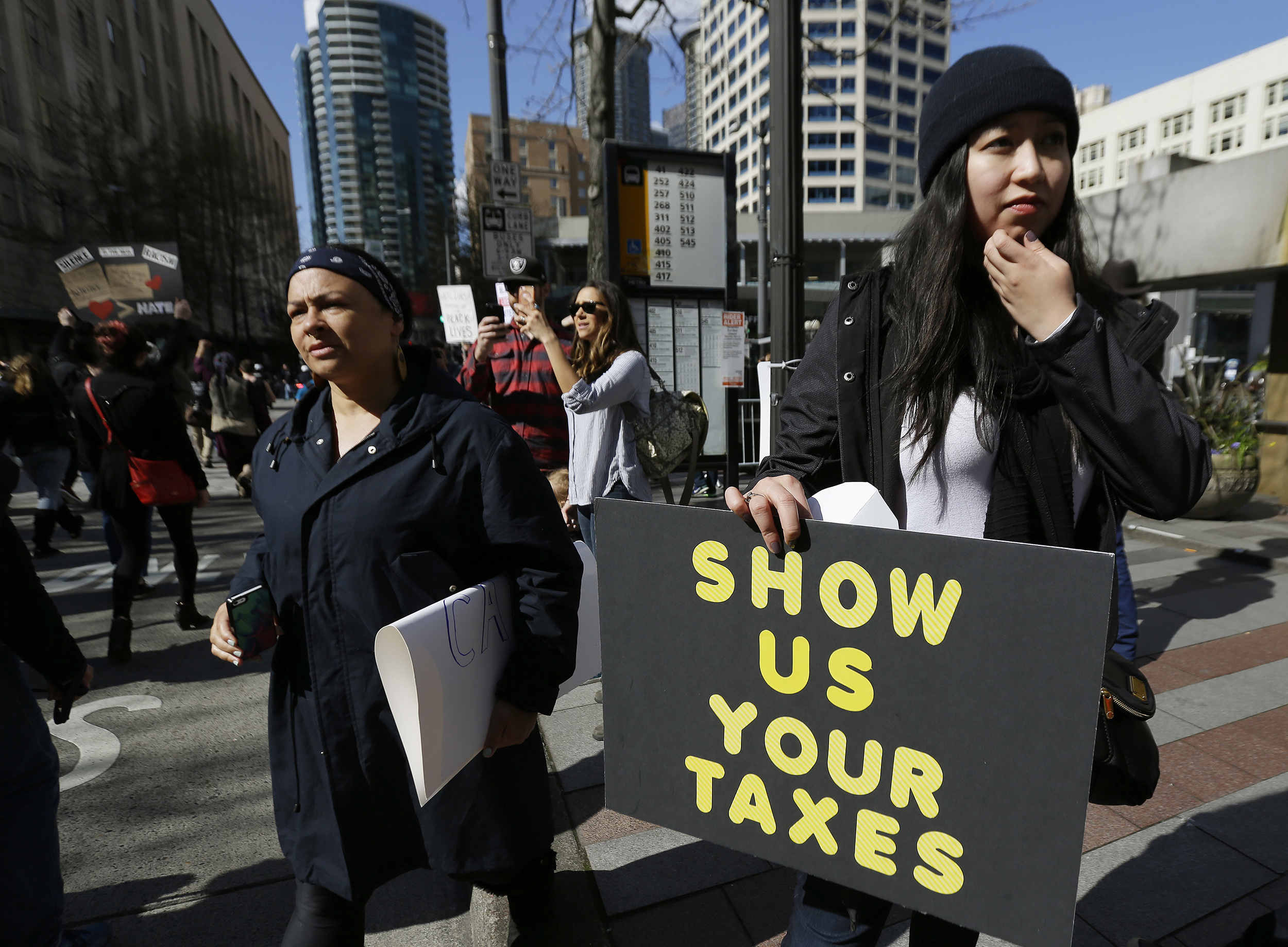 A woman in Seattle holds a sign during a rally calling on President Donald Trump to release his tax returns, April 15, 2017. Similar rallies were held in other U.S. cities. (AP Photo/Ted S. Warren)

Since the late 1970s, every major-party candidate for president has had one thing in common: Each has divulged his most personal financial information to the voting public. Then came Donald Trump. By refusing to release his tax returns during the 2016 presidential race, the Republican candidate for the presidency upended four decades of precedent.

But that’s all it is — a precedent, started after a scandal involving President Richard Nixon’s tax returns. There is no law in place requiring presidential or vice presidential candidates to release this information. Recently, however, there has been a movement to change that, one that has officially found a home in Washington state.

A handful of lawmakers in Olympia is hoping the state will lead the charge in making tax returns a price of entry for the presidential contest, if not to stop the current president, then at least to prevent another candidate from flouting such norms in the future.

“I don’t really view this as a Republican or a Democratic issue,” said Kuderer. “This is really about information that the voters want to have and I believe are entitled to have before they make a decision about who they want as their president of the United States.”

Kuderer, who has worked as a trial attorney, started serving in the state House of Representatives in 2015 before moving to the upper house in 2017. Although she has sponsored a wide variety of legislation, she has focused some of her attention on elections. Last year, she was a prime sponsor on Senate legislation involving on same-day voter registration on Election Day.

Although the legislative session is just getting underway, Kuderer said she has already received some response to the bill from constituents, all positive. She said she hasn’t received any feedback, good or bad, from lawmakers, other than her co-sponsors, but expects to hear from them once the bill gets its first public hearing.

Kuderer and her co-authors, Democratic Senators Sam Hunt, Jeannie Darneille and Rebecca Saldaña, are seeing common cause with legislators in other states. During the 2017-2018 legislative session, lawmakers in at least 25 states introduced similar bills. None has had any success, though some bills are still pending. Only a few states, including Hawaii and Maryland, actually saw the bill get a vote in either house.

In California, a bill similar to the one in Washington was passed by the state Assembly and Senate. The bill, which would only require that the tax returns be submitted “within a reasonable time frame,” was  vetoed by Democratic Gov. Jerry Brown, after he questioned its constitutionality.

“While I recognize the political attractiveness — even the merits — of getting President Trump's tax returns, I worry about the political perils of individual states seeking to regulate presidential elections in this manner,” he said in a message accompanying his veto. “First, it may not be constitutional. Second, it sets a ‘slippery slope’ precedent.”

Recently, Democrats at the federal level have also been pushing for a similar requirement. Last week, newly empowered House Democrats introduced legislation requiring the last 10 federal income tax returns for both major-party nominees and sitting presidents and vice presidents. A similar requirement also was included in a House ethics bill introduced by Democrats earlier this month. But given that the Republicans hold a majority in the Senate and that the president holds veto power, there is little hope the legislation will make it beyond the House.

Meanwhile, at the state level, Washington appears to be in as good a position as any state to actually pass such a bill.

The state has the advantage of a Democratic trifecta, which means the party controls the governorship and the two legislative houses. If the bill gets to the Senate and House floors and all Democratic lawmakers support it, it will pass. But should Gov. Jay Inslee decide to veto it, the state does not have quite the majority needed to override that without the help of some Republican lawmakers.

Washington’s leadership, including Gov. Jay Inslee, has also been very outspoken when it comes to criticizing Trump. Plus, Inslee could benefit from such a law. The governor is considering his own run for the presidency, and, unlike some other U.S. governors, has already released his tax returns.

“We’re a state with both a good-government tradition and significant concern about the president,” said Andrew Siegel, associate professor of law at Seattle University. “If you had to pick one state that was most likely to do it, it might well be us.”

If the legislation does pass, Kuderer said she fully expects it to face a legal challenge. And that’s where things become murky.

On the one hand, the U.S. Constitution does give states some authority over how presidential elections are executed. For instance, every state decides independently whether it will have a “winner-take-all” system, “proportional representation” or some other system altogether. States are also in charge of setting administrative requirements for ballot access, such as gathering a certain number of signatures to get on the ballot. A tax-returns requirement could be viewed as simply one of those regulations, Siegel added.

On the other hand, there is legal precedent that casts some doubt on the state’s authority to add to the qualification required to run for federal office. While the Supreme Court hasn’t weighed in on presidential elections in this way, it has delivered decisions that make clear that states do not have the authority to do this for a congressional seat.

“There are people who argue that because there is a similar list of qualifications for the president and vice president [as there are for members of congress], that opinion would prevail and that a state could not impose additional requirements on someone to be on the state ballot,” said Siegel.

Kuderer is aware of this interpretation. In 2017, she and 16 of her Senate colleagues sent a letter to Attorney General Bob Ferguson asking him for his official opinion about requiring tax returns in order to gain ballot access. She said she has yet to receive a response. With the 2020 election drawing near, Kuderer decided they couldn’t wait any longer.

Yet the legislature may decide that, in a busy session crowded with issues, it is not a priority.

Sen. Dean Takko, D-Longview, a member of the State Government, Tribal Relations & Elections Committee, which is expected to first hear the legislation, said he plans to vote for it. But he doesn’t think lawmakers should spend a lot of extra time on it.

“It is a controversial thing,” said Takko. “If it’s something [where] there’s a hearing, a vote, it moves on to the next committee or rules and things move really quickly, then fine. But if it gets hung up somewhere, I don’t see people wanting to spend a whole lot of time lobbying and pressuring and trying to move this thing along.”

Even if the bill makes it through the legislative process, there is still the question of how much impact it will actually have in the 2020 election — especially when it comes to Trump.

Mark Smith, a political science professor at the University of Washington, said if Washington is the only state that passes a law requiring that presidential candidates release their tax returns, it’s still unlikely that it would persuade the president to share his financial secrets — if he does decide to run for re-election. Washington has not voted for a Republican since Ronald Reagan and, given the wide margin of the last presidential election, is unlikely to do so in 2020.

“It’s one of these things where you need a big enough block of states to do it, where it would really hurt for somebody to not appear on the ballot.”

Kuderer isn’t discouraged. She expects it to impact not only whether a candidate appears on Washington’s ballot, but also whether more states move forward with similar legislation.

“I think it builds more pressure,” she said. “If one state can do it, I think you’re going to see other states then moving forward with it.”