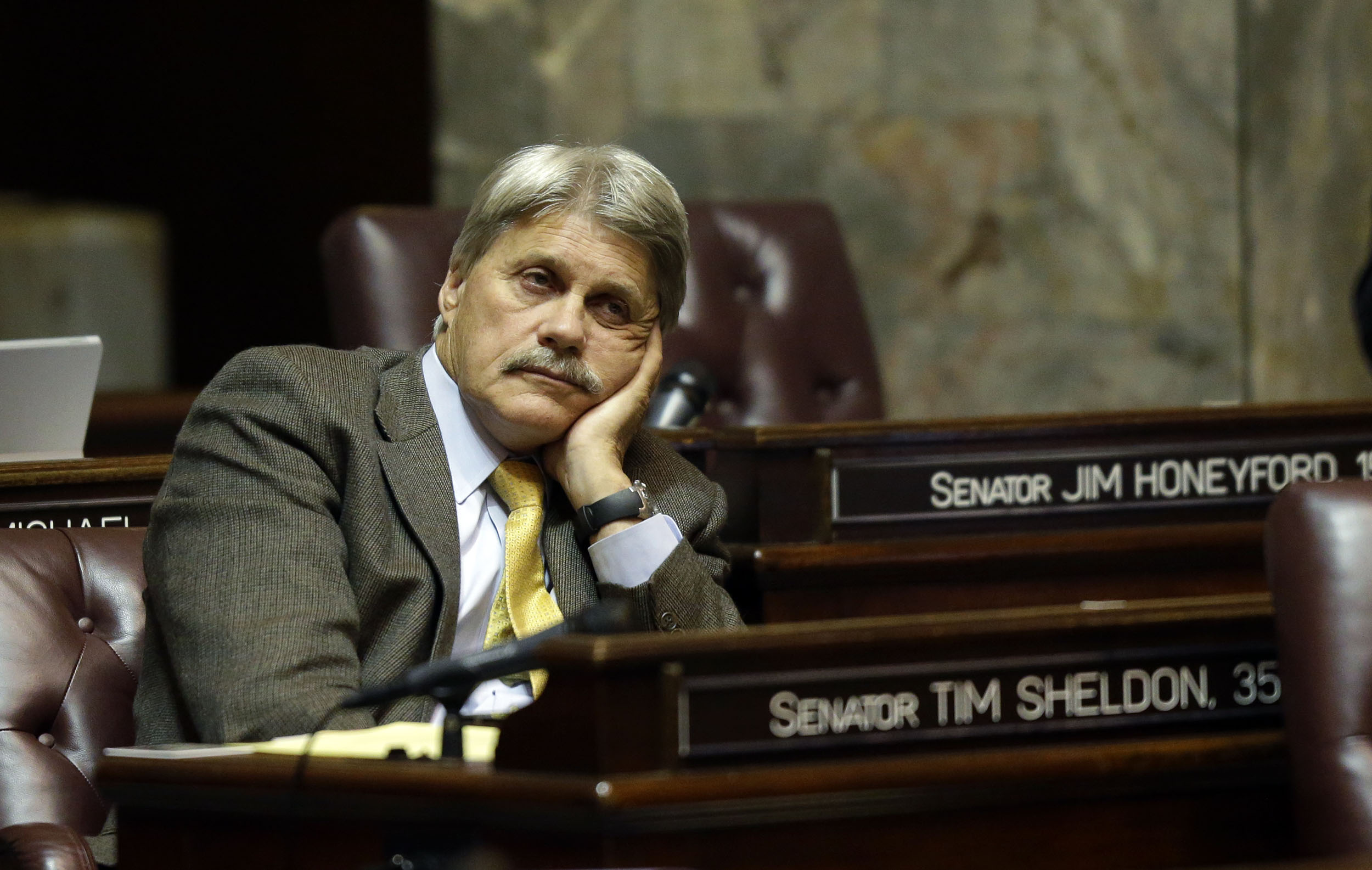 The story that unfolded Monday in the Washington state Senate seemed tailor-made to scare elected officials. During a floor debate, state Sen. Tim Sheldon warned his colleagues that easier access to politicians' required financial reports could be used to target their families.

To argue that those reports shouldn’t go online, Sheldon told a story about an unnamed elected official in Washington state whose wife, a Hispanic woman, was supposedly kidnapped and held for ransom in Mexico.

“With that Hispanic surname and the public disclosure information that was obtained, an incarcerated individual not in this state passed on that information to some individuals in Mexico,” said Sheldon, D-Potlatch, who caucuses with Republicans. “And when she was on a visit to her family down there, she was actually kidnapped.

“Now, it took several thousand dollars and a lot of work to get her out, to free her. This is an example of what some people can do with public information.”

Moments later, state senators voted to ban their personal financial affairs statements — which are designed to disclose potential conflicts of interest — from being posted on the internet. Right now, those forms are not online, though they are provided in response to public records requests.

But that local elected official’s wife? She was never kidnapped, according to the official’s own account. And, when asked after the vote, neither Sheldon nor the elected official in question could point to an example of a politician’s personal financial disclosure form being used to facilitate a kidnapping, or any other type of crime.

Nonetheless, the Senate’s amendment to House Bill 1195 would block the state Public Disclosure Commission from proceeding with its plans to post elected officials’ personal financial affairs statements on the web. The amendment, which passed on a voice vote without any discernible opposition, would also prevent online access to the financial disclosures of other elected officials, from city council members to school board members.

Right now, the financial disclosures — which include generalized information about politicians’ investments, employers, sources of income and real estate holdings — are the only campaign-finance reports the Public Disclosure Commission doesn’t post on its website, a spokeswoman said.

The kidnapping story was a key reason state Sen. Sam Hunt, D-Olympia, urged his colleagues to vote to keep politicians’ financial statements offline. “At the moment, it seemed like something we should look at,” Hunt said in a phone interview, after repeating the story about the alleged abduction.

But reached by phone Tuesday, Sheldon changed his story about the Mexican kidnapping. He said the elected official he was referencing — a Ferry County Public Utility District commissioner — knew someone who was kidnapped, but it wasn’t the commissioner’s wife.

The commissioner, Dan Fagerlie, said the story was about the sister-in-law of a friend, and wasn't connected to information derived from a politician’s financial disclosure form.

While Fagerlie said he has concerns about posting those financial statements, also known as F-1s, he said he brought up the kidnapping to illustrate more generally how criminals have been known to mine the internet for information. He had previously expressed similar sentiments in writing to the Public Disclosure Commission.

“We recently had friends from Mexico visit, and they had just gone through a family-member kidnapping, right off a main street in the middle of the day,” Fagerlie wrote in January. “... They said it was a horrifying 3 days of negotiating to get her back, and it was a $5,000 ransom in the end as the kidnappers had gone online and seen the family’s property ownership in the mountains.” Fagerlie wrote that the kidnappers used that online information to demand a higher ransom than the $500 the family initially offered.

Fagerlie said similar types of information — including about property ownership — can be found on an F-1 form, which is why he opposes posting the forms online.

F-1 forms don’t contain detailed information, such as account numbers or precise values of assets. But they can include the names of financial institutions and addresses of property, along with codes signifying a dollar range for what an asset is worth. Some elected officials, including many judges, are already allowed to omit their home addresses from the F-1 forms because of security concerns.

Kathy Sakahara, a citizen lobbyist with the League of Women Voters of Washington, said posting politicians' financial disclosure forms online is consistent with the spirit of Initiative 276, the ballot measure Washington voters approved in 1972 to increase transparency in government. She said she was “disappointed the bill was amended" in a way that would prevent that.

Toby Nixon, the president of the Washington Coalition for Open Government, said he doesn’t see how keeping elected officials’ financial statements off the internet would deter criminal activity. Politicians’ addresses, for instance, are already available through the state’s voter registration database, he said.

“I don’t really know what this would accomplish in terms of prevention of incidents like that,” Nixon said, referencing the kidnapping story. “Personally, I always thought the F-1s should be posted online, because how many members of the public know how to do a public records request?”

Especially since many elected positions — including that of state senator — are part time, the financial disclosures help constituents know what outside forces could be influencing their elected officials, Nixon said.

Controversy about transparency at the Legislature is nothing new. Last year, legislators faced a furious public backlash when they voted to exempt themselves from the Public Records Act, a move that would have allowed them to withhold more of their working documents than most other government officials. Gov. Jay Inslee ultimately vetoed that legislation, after receiving emails and calls from about 20,000 citizens asking him to do so.

Sheldon emphasized that his goal isn’t to hide information from the public, but to maintain the status quo, in which the financial disclosure forms will be released in response to a public records request. He said he worries that posting the forms online could prevent more people from wanting to run for office.

“I just think the way we have it now — where if you want that information, it’s available to you, but you have to request it — is a lot better than publishing it all online,” he said.

Anne Levinson, who chairs the Public Disclosure Commission, said putting the financial-disclosure forms online would save the agency time and resources. In a letter to Sheldon in February, she said people have been requesting the F-1 forms and uploading them to other websites already.

"In other words, whether or not the PDC posted the F-1s online, they were getting posted, and the staff were spending hundreds of hours a year responding to requests," Levinson wrote.

The bill's sponsor, state Rep. Zack Hudgins, said he is unlikely to fight over the amendment, even though he thinks the story about the kidnapping "seems kooky."

“Taking [the forms] offline, that would be different, but since they are offline now … my hair’s not on fire over it,” said Hudgins, D-Tukwila.

Because the legislation was amended, it now has to go back to the state House for final approval.

The current legislative session is scheduled to end April 28.