Seattle’s Frank Chopp is stepping down after two decades as House speaker. So far, women are the ones lining up to permanently replace him. 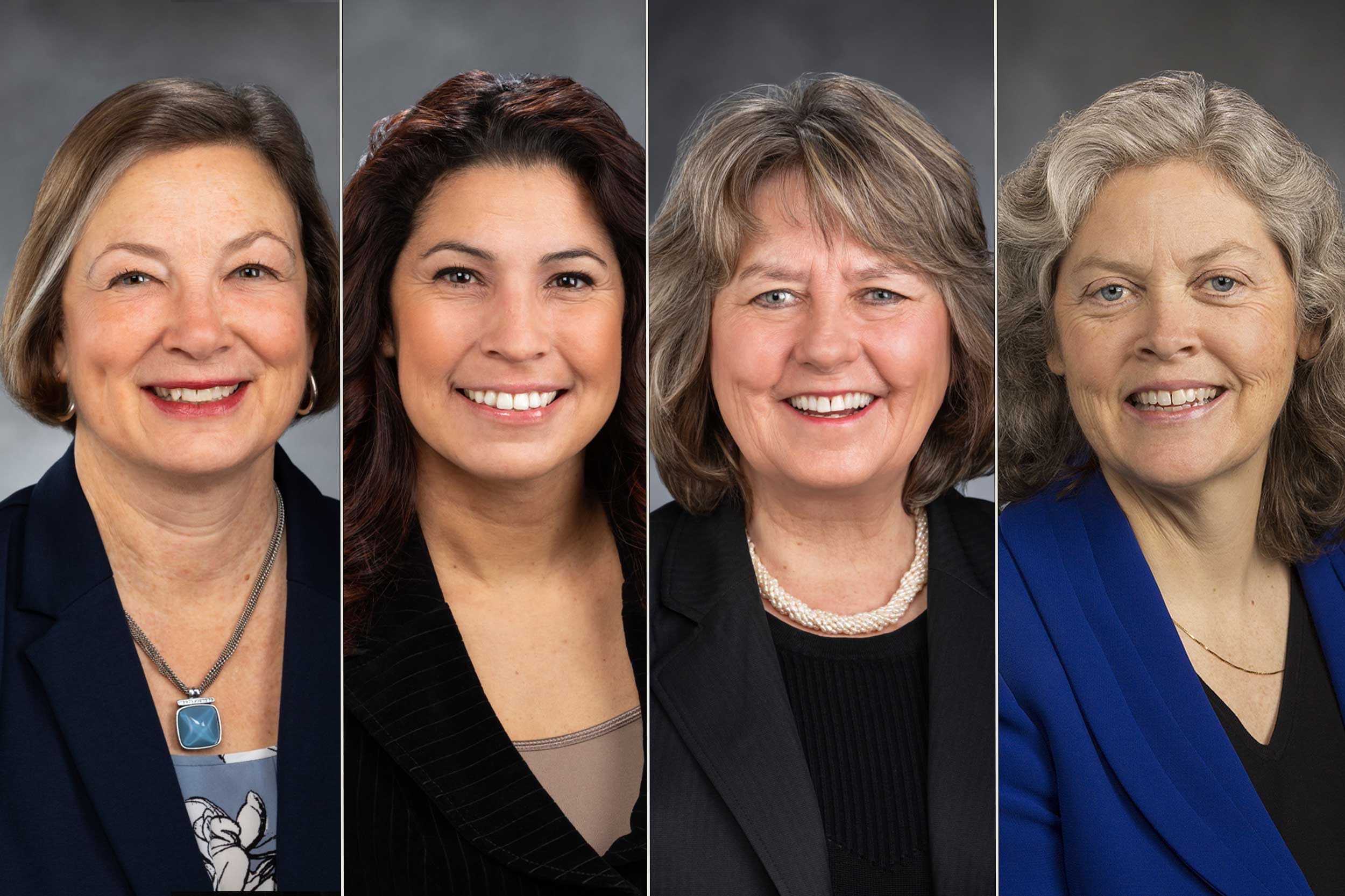 A composite image of Washington state House of Representative members, from left, June Robinson of Everett, Monica Stonier of Vancouver, Gael Tarleton of Seattle and Laurie Jinkins of Tacoma. Stonier, Robinson and Tarleton have announced their candidacy to become the next House speaker, while Jinkins is considered likely to run. (Photos courtesy of Washington State House of Representatives)

Washington has long outpaced other states when it comes to electing women to the state Legislature. Right now, almost 41 percent of state lawmakers are women, a higher percentage than in all but three other states. Multiple women have also been elected to Washington’s highest statewide offices, including governor and U.S. senator.

Still, no woman has ever served as speaker of the Washington State House, one of the most powerful positions in state government.

Most likely, that is about to change. Three out of the four candidates who announced this week they are running to become the next House speaker are women. They are Democratic state Reps. June Robinson of Everett, Gael Tarleton of Seattle and Monica Stonier of Vancouver.

Democratic state Rep. Laurie Jinkins of Tacoma is also actively considering jumping into the race. She is one of eight members of the Legislature’s LGBTQ caucus.

A fourth declared candidate, state Rep. John Lovick, D-Mill Creek, is an African American man — though he has said he is interested in serving as speaker only temporarily, as a placeholder through the end of the calendar year.

Whoever wins the position will replace longtime House Speaker Frank Chopp, D-Seattle, who is stepping down from the position after 20 years leading the chamber.

While more candidates may still emerge before House Democrats vote for a new speaker July 31, all signs point to the job going to someone other than a white man.

State Rep. Joe Fitzgibbon, D-Seattle, said he thinks the next speaker is “almost certainly” going to be a woman — a change he thinks is long overdue.

“I think it is actually time for a woman speaker,” Fitzgibbon said, citing the state’s history of having “just white guys” in the role. Fitzgibbon, a 32-year-old white guy himself, said he doesn’t plan to pursue the job.

The speaker wields tremendous power in the House when it comes to deciding which legislation advances and which will languish and die. Some of that power comes from the speaker’s role chairing the Rules Committee, which decides which bills will go to the House floor and in what order. Other parts of the job occur mostly behind the scenes, such as brokering deals and applying pressure in private meetings.

Last fall’s election brought big changes to the makeup of the state House, both politically and demographically. Democrats picked up seven House seats, ushering in a large batch of new members and giving Democrats their strongest majority in that chamber in years.

Those new members include several more women and people of color, dovetailing with the nationwide trend of voters electing more people of color and women to Congress.

The number of women stepping forward to run for speaker is “continuing what happened in 2018 … this movement of women being in leadership positions,” said state Rep. Melanie Morgan, D-Parkland, who was elected last year.

“I think it’s fantastic that three women so far in our caucus have come forward,” Morgan said Thursday. “So we’re excited about that. What else could we say? We’re here, and we’re doing it.”

A change in leadership style, not just gender, is also part of the discussion.

Robinson said she’s not seeking the job of speaker to push any particular policy agenda, but instead is focused on “shifting the culture of the House” to one that is “hopefully more inclusive.”

“We’ve had a very charismatic, powerful speaker for 20 years and that’s what the state is used to,” said Robinson, who is one of the House budget negotiators. “It’s a lot of work just to shift culture, to try to make it a more inclusive caucus. And get everybody … used to a different power dynamic.”

When asked what she meant by that, Robinson praised Chopp’s leadership, but said he also holds “tight control of every decision.”

“And I think people are ready to see that loosened up,” she said.

Chopp occasionally has frustrated other Democrats by declining to champion certain progressive policies, including legislation related to criminal justice reform, improved sex education and gun control. Last week, state Sen. Reuven Carlyle, D-Seattle, accused Chopp of blocking legislation to abolish the death penalty in Washington, despite reportedly having enough votes in the House to pass it.

“When it comes to issues of criminal justice, issues of race, issues of gender politics, he’s just incredibly uncomfortable and he prefers for other people to lead on those issues,” Carlyle said. “And I think the implications are, as you see a push and a prod for really a healthy reassessment of some of our major institutions … I think he’s uncomfortable with that questioning.”

Environmental issues also haven’t been high on the speaker’s list of priorities, said Carlyle, who chairs the Senate Environment, Energy and Technology committee.

That might change if Tarleton takes on the job. On Wednesday, Tarleton said shaping the state’s efforts to combat climate change is one of her goals if she succeeds Chopp. She said she also wants to help oversee the changes that would come to Washington state as a result of the 2020 Census and subsequent redistricting. Tarleton currently chairs the House Finance Committee, which deals with tax policy.

“I know that what happens in the next few years will decide the future of the next 25 years,” said Tarleton, citing the need to “look ahead” when it comes to dealing with climate-related events, immigration and trade.

Jinkins, who chairs the House Judiciary Committee, has yet to formally announce her candidacy for speaker, but she said she is considering running. Her committee frequently deals with gun safety legislation and criminal justice issues. She said she is “getting close” to making up her mind about whether to seek the job.

Stonier, meanwhile, would bring an educator’s perspective to the position. In addition to serving as the House majority floor leader, she is an instructional coach with Evergreen Public Schools, helping teachers with professional development.

Stonier, who is Latina and Japanese American, is also the only person of color to announce she is seeking the position on a permanent basis. But she said that shouldn’t be a deciding factor in choosing the House’s next leader.

“Our caucus is going to have some choices, and I think each of our choices will have different backgrounds and different skill sets,” Stonier said.

“I am excited for that, I think it’s healthy,” she said. “It’s obviously not been a thing that has happened in a long time.”

Chopp is the longest serving speaker in state history, having first taken on the role in 1999, when a tie in the House meant he shared the role with a Republican, Clyde Ballard. Chopp became the sole speaker in 2002, shortly after a 2001 special election cemented Democrats’ control of the chamber.

While Chopp is resigning the role of speaker in the coming weeks, he plans to continue serving as a rank-and-file House member after that.

Whomever House Democrats choose on July 31 to become the next speaker will still need to be confirmed by a vote of the full chamber, which won’t happen until January.