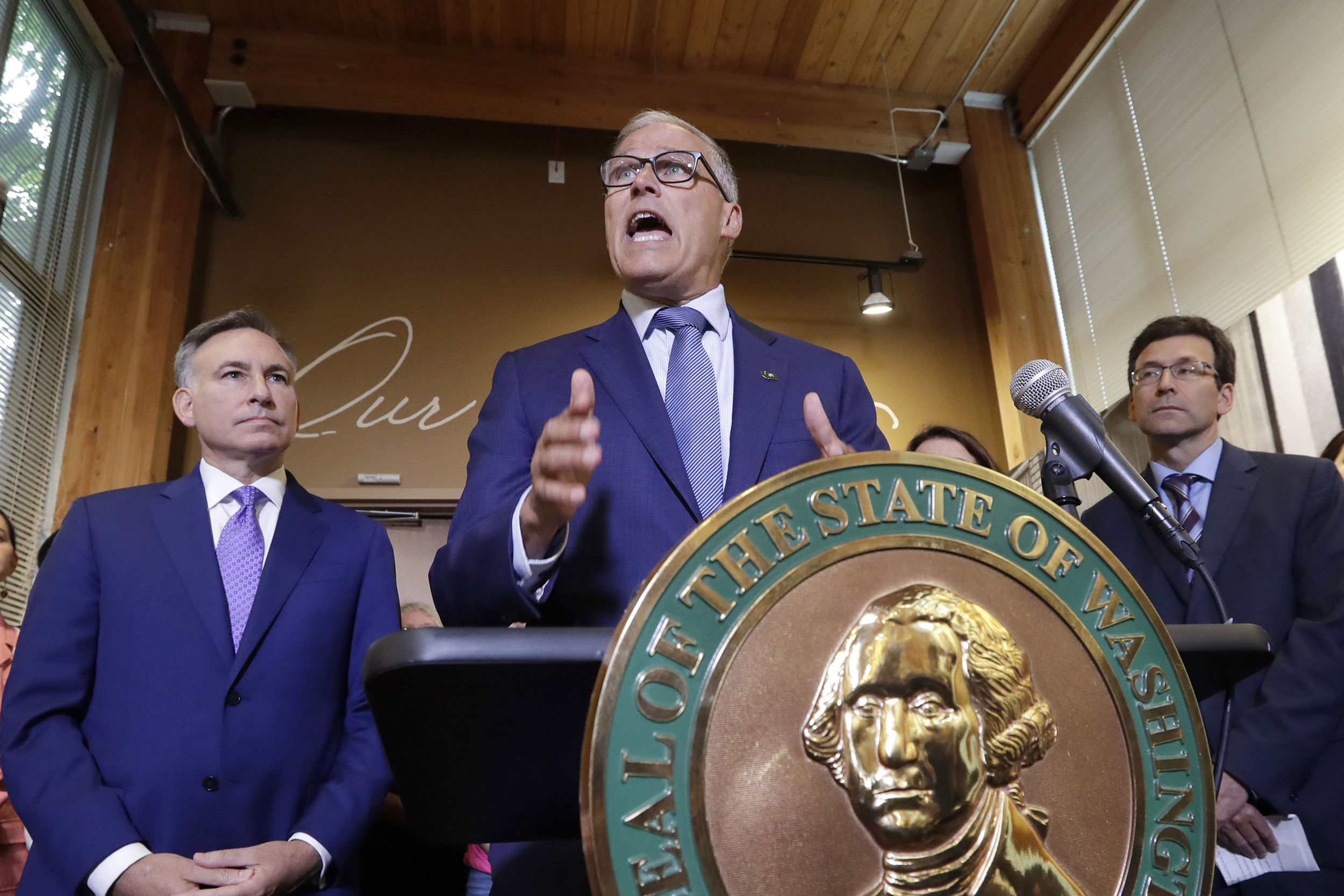 Gov. Jay Inslee cut down the ambitions of many Democratic politicians this week when he removed himself from the presidential race and announced he would seek a third term as governor — a rarity in Washington politics.

Yet even as Inslee declared that he intends to serve a full term if re-elected next November, many speculated he could still be a prime pick for a federal Cabinet position, should a Democrat win the White House in 2020.

That would mean other Democrats who previously announced their interest in running for governor — including Commissioner of Public Lands Hilary Franz, Attorney General Bob Ferguson and King County Executive Dow Constantine — might still have a shot at the job in the next couple of years.

“I think more of them are thinking of their campaigns as being on hold, with the hope that we elect a Democratic president in 2020,” said Michael Charles, a Seattle-based political consultant who works with Democrats. “I think there are lots of preparations for the possibility of things changing in a year and a half.”

Inslee, for his part, told reporters Thursday that he is not interested in a federal Cabinet position, and is instead focused on leading the state and fighting the Trump administration from Olympia.

“There was one position in Washington, D.C., that I thought I was interested in,” Inslee said. “I will not be serving in that capacity. But I am looking forward to serving as governor, if people give me this option.”

Based on Inslee’s announcement that he would pursue a third term, Constantine, Franz and Ferguson all said that they would seek re-election to their current positions, rather than challenging Inslee for the governor’s mansion.

But even as those announcements rolled out one by one, the top Democratic prospects to succeed Inslee in the governor’s office were ready to address the possibility of Inslee winning re-election and leaving for a post in Washington, D.C., a few months later.

“I think I and all those who have expressed interest would look very seriously at running if the governor were to be appointed to, say, a Cabinet position,” Constantine told reporters Thursday.

Asked if he was preparing for such a possibility, Constantine replied, “One is always preparing,” but that he remains focused on doing “the best work [he] can do” as county executive.

Ferguson said he, too, would be interested in running for governor if the job somehow became open in 2021. The attorney general added he thought Inslee would make a terrific member of a Democratic Cabinet.

“I wouldn’t be surprised if he is offered a position if there’s a Democratic president,” Ferguson said. “I think he’d be a huge asset to our country in any role that he felt was the best one for him and his family in which to serve.”

Likewise, Franz said she would "absolutely" be interested in running for governor if Inslee took a Cabinet job and the position became vacant.

Some political observers have mentioned Inslee as a potential candidate to lead the Environmental Protection Agency or the Department of Interior, given the governor’s laser focus during his presidential campaign on combating climate change.

“All of us would be so proud of him if he was the head of EPA or the Interior,” said Heather Weiner, a Democratic political consultant. But, Weiner added, “It might also be wishful thinking on a lot of people’s parts, since he would be so good in that role.”

Should a Democratic president take office in January 2021 and offer Inslee such a position, the governor would be faced with a choice.

If Inslee were re-elected and then resigned in order to take a Cabinet position before the May 2021 deadline for candidates to file for statewide elected office, a special election would be held that November to choose a new governor, according to the Washington Secretary of State’s office.

Ron Dotzauer, a former Democratic campaign manager who started a communications and marketing agency several years ago, said he thinks many candidates are actively thinking about that possibility — as well as vacancies that it could open up further down the ballot.

“All of them are going into political time-out,” Dotzauer said Thursday. “The whole political field is going into time-out.”

Peter Graves, a Republican political consultant, said he doesn’t trust Inslee’s proclamation that he isn’t interested in a federal job. Graves cited Inslee’s promise that he would veto new taxes when he ran for governor in 2012. Two years later, Inslee proposed new taxes in his budget.

Graves said he thinks other Democrats are also downplaying their disappointment about Inslee’s decision to run for governor again.

“People are not happy, I’ll tell you that,” Graves said.

Cyrus Habib, the current Democratic lieutenant governor, said he would be prepared to serve as governor if a vacancy arose. But he emphasized that many conditions would have to be met for that to happen. Not only would both he and Inslee have to win re-election to their current positions, but a Democrat would have to defeat Republican President Donald Trump in November 2020. And that Democrat would have to set his or her sights on Inslee as a Cabinet member.

For his part, Habib wouldn’t say if he would want to run for governor if Inslee were swept away to Washington, D.C.

“A lot of folks in our state’s political ecosystem just went down this rabbit hole of, ‘If this chess piece moves there, then I’ll move here,’” Habib said Thursday. “I think the last 24 hours show that kind of thing is premature and not necessarily the path to happiness.”