Seattle, King County and the other plaintiffs suing to overturn the initiative “have sufficiently shown they are likely to prevail,” said the King County Superior Court judge. 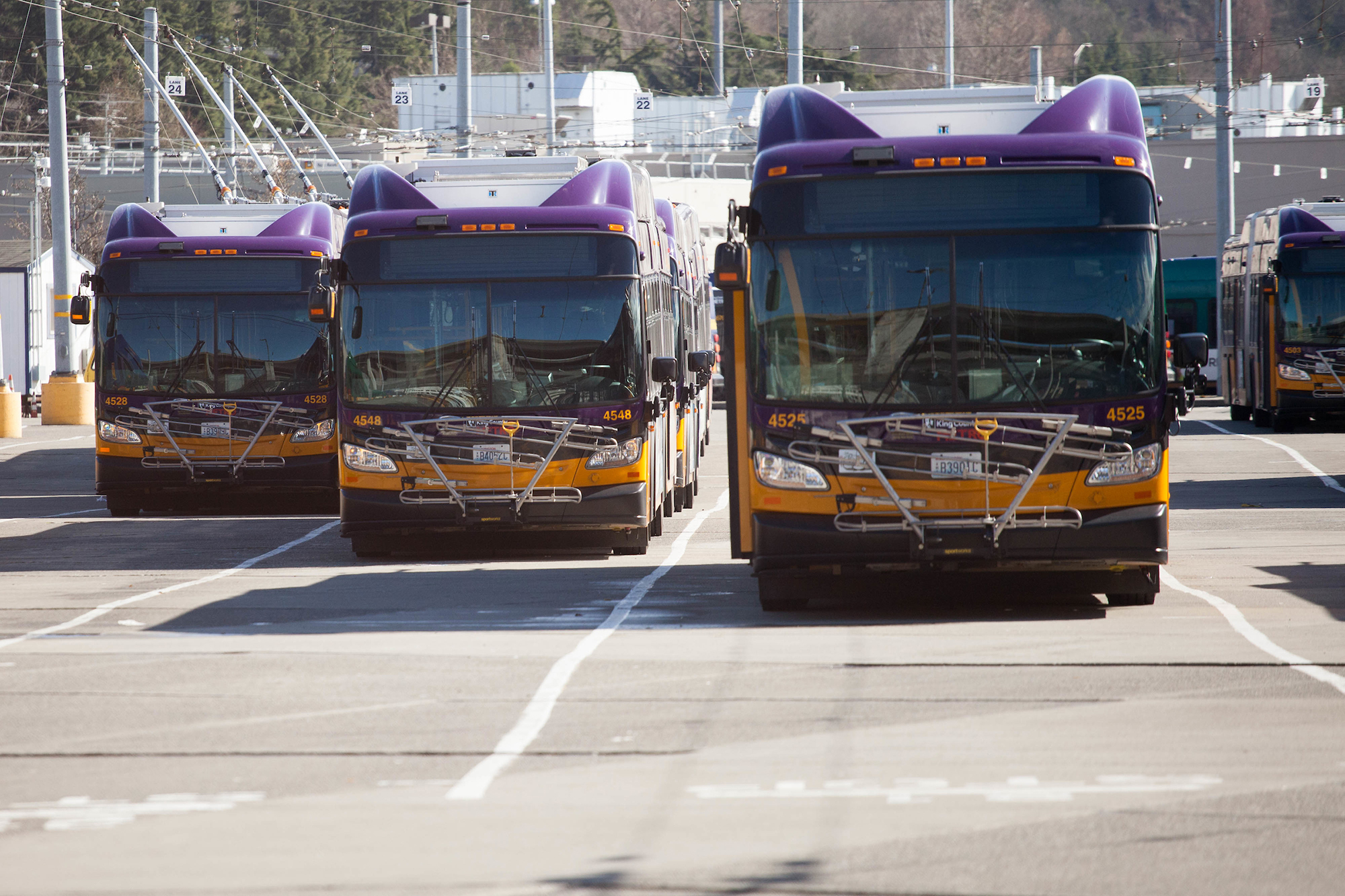 Buses are seen at King County Metro Atlantic Base in Seattle, Washington on March 22, 2017. The county says it would need to make $119 million in cuts if I-976 is enacted. (Matt Mills McKnight/Crosscut)

Initiative 976, which Washington state voters approved earlier this month to cut what they pay in car-tab fees, will be placed on hold while a legal challenge to the measure plays out in court, a King County judge ruled Wednesday morning.

The majority of the initiative was set to take effect Dec. 5. But King County Superior Court Judge Marshall Ferguson agreed to temporarily block the measure’s implementation, saying the harms of letting the measure go into effect outweigh the harms of pressing pause for now.

The initiative’s harmful effects would include forcing King County Metro to cut 110,000 bus service hours, as well as eliminating money the city of Seattle uses to maintain roads and provide subsidized transit passes, Ferguson noted in his Wednesday morning order.

As the underlying case will likely end up before the state Supreme Court, those harms would not be short-lived, Ferguson wrote.

“If I-976 were ultimately found to be unconstitutional, the long-term hardships endured by Washingtonians whose transit services were cut for those many months or years … could never be retroactively mitigated,” Ferguson stated in his order.

Meanwhile, the state Attorney General's Office, which is defending the initiative on behalf of voters, is filing an emergency appeal asking the state Supreme Court to overturn the lower court's decision. The state is asking the high court to instead let the initiative go into effect as scheduled.

"My team will be working over the Thanksgiving weekend to get this done," said state Attorney General Bob Ferguson, who is not related to the King County judge, in a statement on Wednesday afternoon. "...Our objective is to get the issue before the Supreme Court in time for the initiative to go into effect on Dec. 5 as intended by voters."

The plaintiffs in the case, which include Seattle, King County and the Garfield County Transportation Authority, are seeking to get I-976 thrown out in its entirety, arguing it is unconstitutional on multiple fronts.

They argued a preliminary injunction is needed while the case proceeds, to prevent immediate cuts to transit and other infrastructure.

I-976, sponsored by anti-tax activist Tim Eyman, is designed to cut state and local car-tab fees to a flat $30. It is expected to strip state and local agencies of more than $4 billion in revenue for transportation and transit needs over the next six years.

Among multiple arguments, the plaintiffs say the language of I-976 deceived voters and combines too many disparate policies into one initiative.

Their argument that the ballot title might have been deceptive resonated with the King County judge, he said in granting the preliminary injunction Wednesday. While the ballot title said “voter-approved charges” were exempted from the $30 limit on motor-vehicle license fees, the text of the initiative in fact eliminates past charges that were approved by voters, Judge Ferguson wrote.

While the plaintiffs will still need to prove their case in court, Judge Ferguson said they “have sufficiently shown they are likely to prevail,” leading him to grant their request for the preliminary injunction.

Seattle, King County and the other plaintiffs maintain that the statewide measure improperly overrides the will of Seattle voters, who approved an added $60 vehicle licensing fee in 2014 to pay for bus service.

I-976 will “tremendously harm the infrastructure of our state, [and] the transportation and transit of many of our large urban areas,” said David Hackett, an attorney representing King County, during a court hearing Tuesday.

“But, most importantly, it does this without the consent of those areas,” he said.

The coalition also argued that I-976 would impair existing contracts — something that the state constitution says is not allowed — by taking away taxes that have already been pledged to construction bonds.

The state Attorney General’s Office disputed that Seattle, King County and the other plaintiffs had established that the measure was  “unconstitutional beyond a reasonable doubt,” which Deputy Solicitor General Alan Copsey said was a prerequisite for temporarily halting the measure.

“The question is, is there an immediate harm they have been able to show now?” said Copsey, who argued the state’s case in court on Tuesday. “...They allege several harms, but they haven’t alleged they will occur immediately.”

During Tuesday’s hearing, Copsey noted that Seattle has a budget surplus it could use to offset some of the transit and transportation cuts that city officials predict they will have to make as a result of I-976. He mentioned how the city of Seattle recently sold the Mercer Megablock for $143.5 million as an example of one way the city can raise revenue.

Also at the hearing, Carolyn Boies, a Seattle assistant city attorney, objected to “the idea that this city or any city is flush with cash and doesn’t need the dough” — a sentiment she called “shocking.”

She said other cities, including small towns like Buckley, in Pierce County, also would sustain big hits to their budgets if I-976 goes into effect.

Officials in communities such as Garfield County's Pomeroy, population 1,400, have expressed similar concerns about the consequences of the initiative.

Eyman, the initiative’s sponsor, sprang up from his seat toward the end of Tuesday’s hearing to try to make additional legal points, causing the judge to have to tell him to be quiet. Eyman later confronted lawyers from the state Attorney General’s Office, accusing them of doing a poor job of defending I-976.

Noah Purcell, the state’s solicitor general, told Eyman that the state was doing everything it could to defend the initiative.

Eyman is currently being sued by state Attorney General Bob Ferguson, who has alleged the conservative activist has repeatedly broken campaign finance laws, and enriched himself with donations meant to support initiative campaigns.

Eyman derided the King County judge’s decision Wednesday, while calling for Gov. Jay Inslee to convene a special session of the Legislature to address the court’s ruling. Eyman, who recently announced he will run for governor against Inslee in 2020, is urging voters to not pay their car-tab fees, which he called “illegal,” given voters’ recent approval of I-976.

Additionally, Eyman railed against the Attorney General’s Office, which writes the ballot titles for initiatives. In an email blast on Wednesday, Eyman wrote, “Bob Ferguson failed the voters by sabotaging and undermining I-976 from within.”

Others celebrated the King County judge's ruling on Wednesday. Justin Leighton, executive director of the Washington State Transit Association, said that it’s clear the judge saw “we have merit, and standing, and clear arguments that this is unconstitutionally written.” The Washington State Transit Association, which represents 32 public transit providers throughout the state, is one of the plaintiffs in the case.

Leighton said “the injunction provides some reliability and relief for riders” — at least for the time being.

In a written statement, Seattle Mayor Jenny Durkan noted that most Seattle voters rejected I-976, despite its passage statewide with about 53% of the vote. Durkan said the injunction will allow Seattle to continue its ORCA Opportunity program, which provides free transit passes to more than 14,000 Seattle residents.

Seattle City Attorney Pete Holmes issued a statement calling the judge’s decision “prudent,” while adding that it was “frustrating that Washingtonians were asked to vote on such a misleading measure.”

“Seattleites can take a collective sigh of relief knowing they won’t suffer in their commutes while this case is being argued,” Holmes’ statement said.

This story was updated to add statements from the state Attorney General's Office and the City of Seattle, as well as other reactions to the ruling. 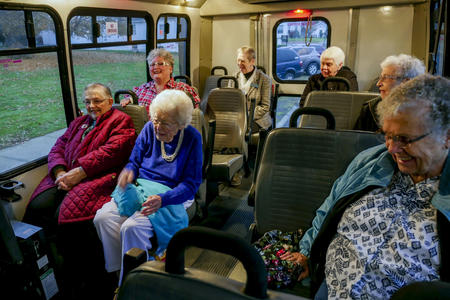