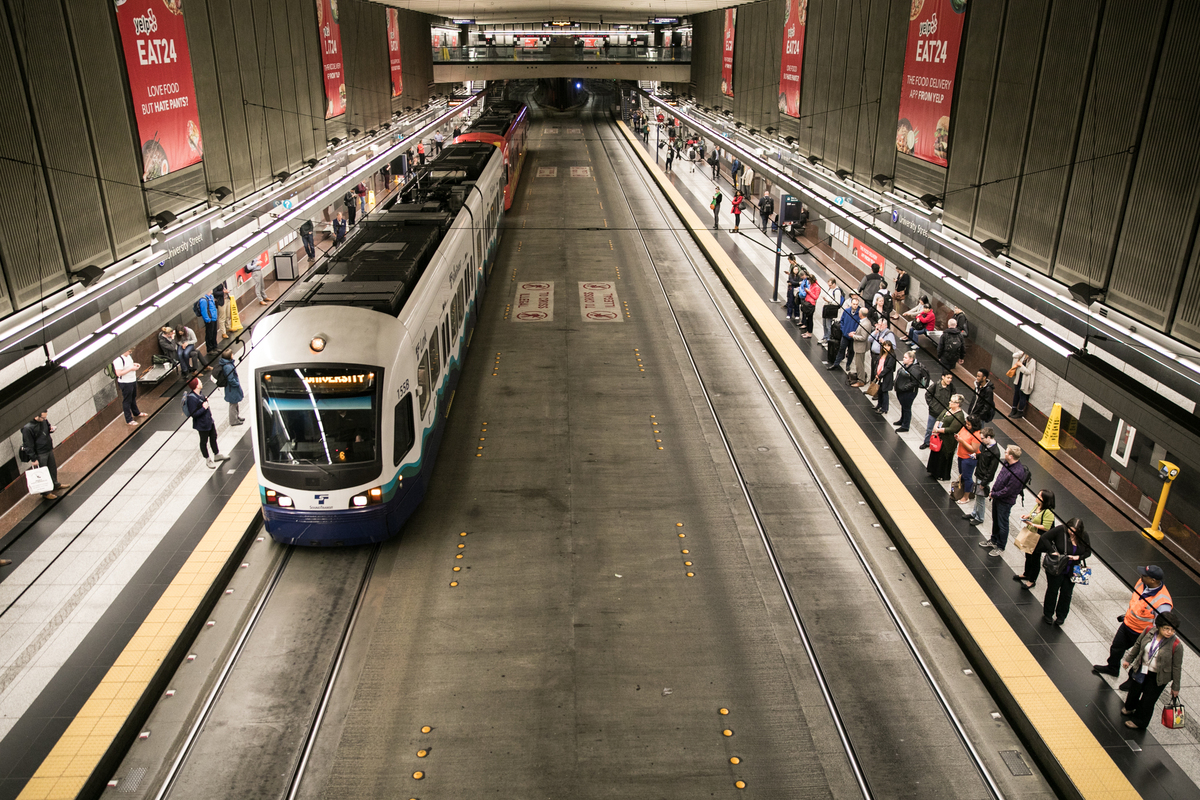 The passage of Initiative 976 throws the future of funding for road repairs, buses and light rail expansion in Seattle into limbo. (Lizz Giordano for Crosscut)

Steve Hobbs is preparing for a mess following Tuesday’s election. As chair of the Transportation Committee in the Washington State Senate, the Lake Stevens Democrat now expects having to cut hundreds of millions of dollars from the state’s transportation budget over the next couple of years.

“Basically, I kind of view this as a sinking ship, and I have to do what I can to try to save most of the people on the ship — but the ship’s going down,” Hobbs said Wednesday.

The reason for Hobbs’ consternation is Initiative 976, which he says will negatively impact “every bit” of the state transportation budget. The measure, which would slash annual vehicle licensing fees to a flat $30, was winning handily Wednesday, capturing about 55% of the vote.

“This definitely will set us back 10 years, I think, with transportation,” Hobbs said of the effects of Tuesday’s vote.

Similar conversations were playing out Wednesday in city halls and government conference rooms across the state. According to the state Office of Financial Management, I-976 will cause state and local governments to lose a total of about $4.2 billion in revenue for transportation and transit projects over the next six years.

In Seattle alone, city officials expect to lose at least $32 million annually in car-tab taxes that help pay for a range of services, including local bus lines and road maintenance.

“We have to be realistic … we may not have the monies that we’d hoped to have to continue our important transportation investments and simple maintenance,” Seattle City Councilmember Sally Bagshaw said at a budget committee meeting Wednesday morning.

I-976 will also eliminate local car tab fees that pay for transportation needs in 61 other cities, including Everett, Tacoma and Spokane.

Some officials were already looking for ways to try to overturn the initiative through the courts. By midday Wednesday, King County Executive Dow Constantine announced he was asking the county prosecuting attorney “to prepare a lawsuit to challenge the constitutionality of I-976,” according to a news release.

“We are not going to abandon the notion of building a functioning transit and transportation system just because of one initiative,” Constantine said. “We are going to find the way, and we are going to use legislative and legal paths to get there.”

Seattle, too, intends to sue. Mayor Jenny Durkan and City Attorney Pete Holmes plan to hold a press conference Thursday to announce a lawsuit that will seek to block the initiative.

The sponsor of I-976, anti-tax activist Tim Eyman, warned that any attempt to challenge the voter-approved initiative would only increase people’s distrust of government. He said that’s what drove voters to approve his tax-cutting measure in the first place.

“The last thing they ought to do is turn around and say, ‘You know what, we are going to sue the voters,’” Eyman said late Tuesday evening, anticipating that the initiative would face a legal challenge.

“I think that will be just pouring gasoline on the fire of distrust of government if they do that,” he said.

In the meantime, Democratic Gov. Jay Inslee said Wednesday that he was directing the state Department of Transportation to postpone projects that were not yet underway.

"I have also asked other state agencies that receive transportation funding, including the Washington State Patrol and Department of Licensing, to defer non-essential spending as we review impacts," Inslee said in a news release.

One of the agencies that has the most to lose under I-976 is Sound Transit. The three-county taxing district is in the middle of executing a $54 billion plan to expand transit service in Pierce, King and Snohomish counties. Puget Sound voters approved the Sound Transit 3 package three years ago, signing off on the agency’s plans to extend light rail to West Seattle, Ballard, Tacoma and Everett by 2041.

But under I-976, Sound Transit would lose some of the car-tab revenues that underwrite that 25-year plan. According to Sound Transit’s estimates, I-976 will cost the agency about $20 billion through 2041, potentially causing some of the planned light-rail projects to be canceled or delayed.

In a statement, Redmond Mayor John Marchione, who chairs the Sound Transit board, said board members will “begin the process of responding to I-976” at their next meeting Nov. 21.

Asked if the agency might also try to sue to stop the initiative, Geoff Patrick, a spokesperson for Sound Transit, declined to comment in detail. “Anything we could say at this time would immediately get into speculative territory,” he wrote in an email, saying board members would discuss the matter at the upcoming meeting.

Mary Kay Clunies-Ross, a spokesperson for the No on I-976 campaign, said it became clear with Wednesday's returns that the measure was likely to pass, even with more than 200,000 ballots left to count in King County.

She said many agencies are probably looking at how I-976 might affect bonds tied to their existing car-tab revenues — and whether those bond agreements could form the basis for a lawsuit.

The state Supreme Court struck down one of Eyman’s previous car-tab tax cuts, Initiative 776, because the affected tax money was tied up in the bond market and already being used to finance projects.

“There are legal questions because of the way the initiative was written,” Clunies-Ross said Wednesday. “All of those agencies are going to have to see if there are legal problems with their ability to comply with contracts they have already entered into.”

State Rep. Jake Fey, who chairs the Transportation Committee in the state House, said he wasn’t trying to sue on behalf of the state at this point.

Rather, the Tacoma Democrat said he was focused on finding ways to close what is shaping up to be a $458 million hole in the state’s current two-year transportation budget.

In future budget cycles, the cuts will be even steeper, Fey said, amounting to about 15% of the state's transportation spending.

While the Legislature can suspend or amend a voter-approved initiative with a two-thirds majority vote, neither Fey nor Hobbs, the Senate transportation chair, were considering that as a serious option as of Wednesday. “I don’t see how there are the votes to do that,” Hobbs said.

Although Democrats control both chambers of Washington’s Legislature, they don’t have two-thirds majorities in either chamber.

Senate Minority Leader Mark Schoesler, R-Ritzville, said that lawmakers might have avoided this outcome if they had done more to address the cost of car-tab fees in recent years.

Quickly after the passage of Sound Transit 3, complaints arose that people’s car-tab fees were higher than expected. That’s partly because the agency uses an outdated vehicle depreciation schedule to calculate the annual registration fees. That formula overestimates a vehicle’s value in its first 10 years of life, leading to higher fees than one might expect, based on a car’s actual market value.

Schoesler criticized Democratic lawmakers for not doing more to address those concerns since they gained control of both the House and Senate in late 2017.

“If you do nothing and you expect this to go away — well, it didn’t,” Schoesler said Wednesday. “They’ve ignored the wishes of the voters for a long time, and this is what happens.”

That may not be much solace to some of the local cities now fretting about cuts to their buses and road funds.

Reached by phone Wednesday, Tacoma Mayor Victoria Woodards said I-976 will eliminate $2.9 million per year the city uses for street maintenance and paving. It also could threaten certain state grants  that the city receives to pay for pedestrian improvements and safe routes to school, she said.

Beyond that, Woodards said she worries the initiative could threaten Sound Transit's proposed light rail extension to Tacoma.

Meanwhile, officials in Everett say that the initiative will cause them to lose public works funding, as well as money for paratransit services that help people with disabilities.

"These are real things that it hurts," Woodards said. "We are working hard to figure out what the impacts would be, and what steps we should take moving forward."

This story was updated to include a statement from Gov. Jay Inslee that was released Wednesday evening.

by / November 5 /
Article continues below