A Black person hasn’t served in the state Senate for a decade. That could change with this year’s election. 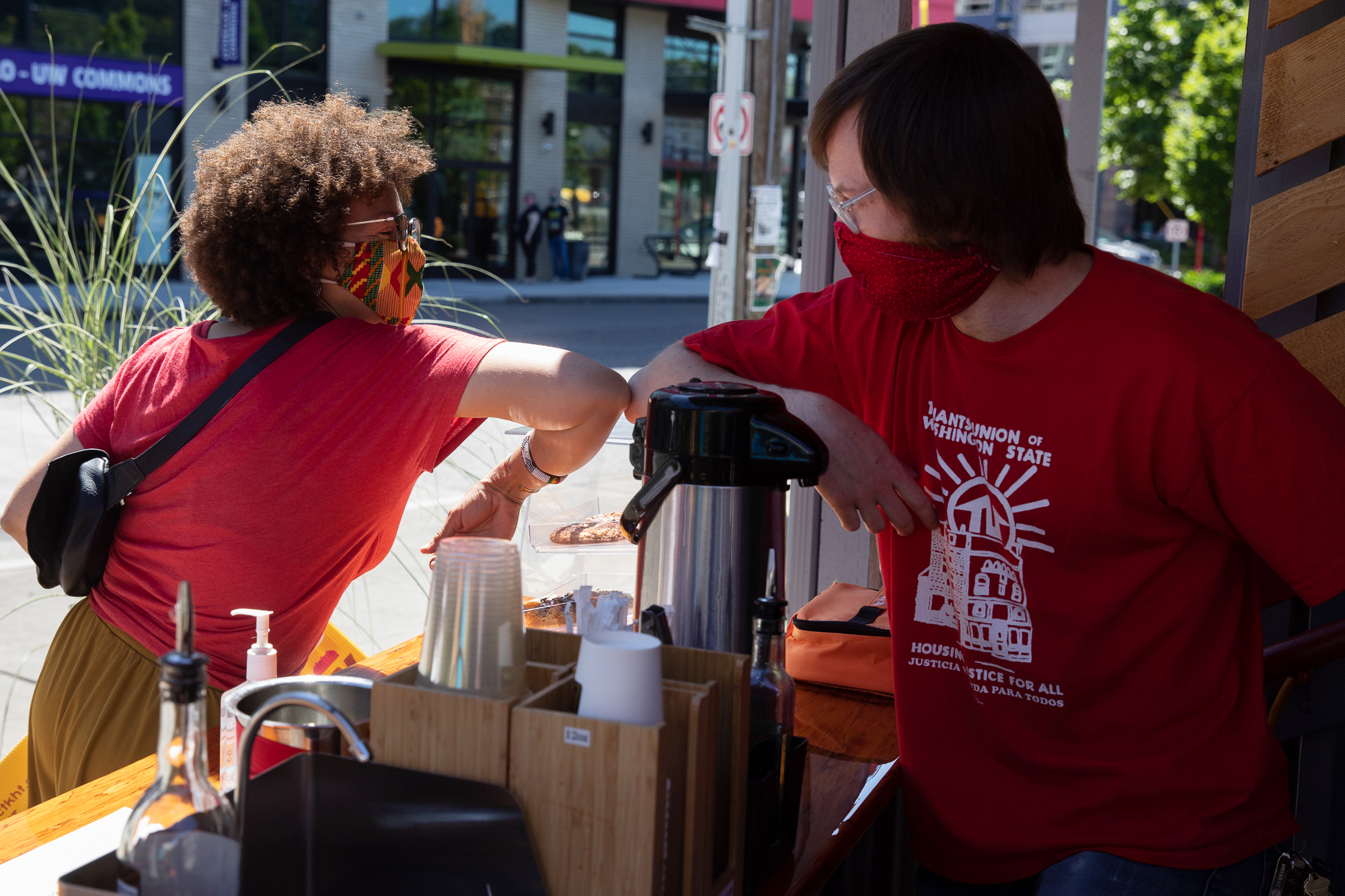 Rosa Franklin got used to being the only Black person in the room.

When the Tacoma Democrat joined the Washington state Senate in 1993, she was the first Black woman to ever serve there.

To date, there has yet to be a second. Twenty-seven years after Franklin broke that barrier, she remains the only Black woman to ever become a Washington state senator.

This year’s election could change that.

Nine Black women are campaigning for state legislative seats this year — far more than Franklin remembers ever running before in a single year. A 10th candidate, who is gender nonbinary and identifies as Black femme, is running as well.

Since Franklin retired from office in 2010, the state Senate hasn’t had a single Black member.

“We lost ground,” said Franklin, now 93, in a phone interview this week.

One of the most closely watched races this year is between state Sen. Steve O’Ban, R-Tacoma, and T’wina Nobles, president and CEO of the Tacoma Urban League.

If Nobles wins in November, she could become the only Black member of the state Senate. In the process, she would flip a Senate seat that Democrats have long sought to wrest from Republicans, in Pierce County’s politically moderate 28th Legislative District.

This year’s election also has the potential to double, or perhaps even triple, the number of Black women in the state House. Eight Black women are vying for state House seats, with four running in competitive battleground districts.

As it stands today, only five of the Legislature’s 147 members are Black, and only two are Black women.

There’s a chance, too, that Washington voters could send a Black woman to Congress for the first time in state history, if either Kristine Reeves or Marilyn Strickland wins the crowded race to succeed retiring U.S. Rep. Denny Heck, D-Olympia.

Ballots for the Aug. 4 primary election should start hitting voters’ mailboxes soon. Friday marks the deadline for election officials to mail them.

Crystal Fincher, a political consultant who works mostly with Democratic candidates, said the recent mass demonstrations against police brutality highlight the importance of having more Black lawmakers in office.

“Looking at the protests that have been most recently motivated by the murder of George Floyd, a lot of white people and non-Black people of color are learning a lot through this process, and finally understanding and hearing what Black people have been saying for decades,” Fincher said.

By contrast, to Black people and the few Black lawmakers now in office, she said, “this isn’t new.”

“We could have had a head start if we had more Black legislators, and the problem may not have gotten this bad — because we would have had people who understood what their community was going through, who would have been motivated to act,” Fincher said.

For Joy Stanford, a Democrat running to represent a swing district that includes Gig Harbor, Port Orchard and part of Bremerton, the experience of being a Black woman living in a mostly white community is part of what started her down the path of running for office.

In 2017, someone set a fire at Peninsula High School in Gig Harbor, where Stanford’s son attended school. The fire was accompanied by racist graffiti, according to the county sheriff’s office.

“Whoever it was wrote, ‘Black Lives Don’t Matter’ on the ground,” Stanford said. “And it just lit a fuse in me.”

“I saw the look on my son’s and other students of color’s faces, looking down at that on the ground, and it broke my heart,” she said. “And I thought, ‘Not my babies.’ ”

Stanford, a housing advocate and substitute teacher, is trying to unseat state Rep. Michelle Caldier, a Republican who has represented the 26th Legislative District since 2015.

Nobles, who is running for the state Senate, said one reason she decided to challenge incumbent O’Ban is because she felt he wasn’t listening to people in his district, including Black residents.

She said that became clear to her when she and other Urban League leaders came to the Capitol earlier this year, and O’Ban didn’t meet with them.

“It was like we weren’t important,” said Nobles, who also serves on the University Place School Board.

O’Ban said he wasn’t at that meeting because he was chairing another meeting, on mental health, in Tacoma at the same time. In addition to serving in the Legislature since 2013, O’Ban is the senior counsel for behavioral health for Pierce County Executive Bruce Dammeier.

State Rep. Joe Fitzgibbon, a Seattle Democrat who chairs the campaign arm of the House Democrats, said he thinks the number of Black women running this year is a testament to how the state’s demographics have shifted in the past two decades, particularly in the suburbs.

This year, Black women are running as Democrats in all three of those districts. Jamila Taylor, an attorney who works with crime victims, is seeking election in the 30th District. Meanwhile, Everett School Board member April Berg is running in the 44th District, which includes Lake Stevens, Mill Creek and Snohomish.

In the 17th Legislative District, where Democrats hope to gain a seat in the fall election, Tanisha Harris, a YWCA program specialist, is looking to defeat incumbent state Rep. Vicki Kraft, R-Vancouver.

Taylor and Berg each face multiple opponents. In crowded races like theirs, the two candidates who get the most votes in the Aug. 4 primary will advance to the November general election.

Fitzgibbon said he and other Democratic leaders are confident that Black female candidates can run and win in the suburbs.

“I think maybe 20 years ago that was perceived as a riskier thing," Fitzgibbon said. "In this cycle, we see that as an advantage.”

That’s in no small part due to efforts by women of color to recruit and train Black women to run for office, said Alexis Turla, who co-chairs a political action committee dedicated to that work.

Turla, who previously worked in Olympia as an adviser to former Gov. Chris Gregoire, said she got sick of seeing how the departure of even one Black lawmaker would dramatically reduce Black representation in the Legislature.

“Every single time when there was a loss, we’d then only have one,” Turla said. In 2014, for instance, when state Rep. Roger Freeman died of cancer, state Rep. Eric Pettigrew, D-Renton, was temporarily the state’s only Black lawmaker.

Pettigrew is retiring this year.

State Rep. Debra Entenman, D-Kent, said that although Black women aren’t monolithic in their views and experiences, they share the experience of being discriminated against because of their race, gender, or both.

That influences how they approach statewide policy issues, said Entenman, one of two Black women now serving in the Legislature.

“Sometimes I will say things in caucus and people will say, ‘I never thought about it like that,’ ” said Entenman, referring to the closed-door meetings in which lawmakers discuss pending legislation.

At the same time, having so few Black members of the Legislature means each one is sometimes seen as a spokesperson for all Black people, said state Rep. Melanie Morgan, D-Parkland.

That kind of tokenization is draining, and another reason the Legislature needs more Black representatives, Morgan said.

Each of the seven Black female or nonbinary candidates who spoke to Crosscut this week emphasized the need for the Legislature to take action to address social and racial inequities. Such disparities are more evident than ever during the COVID-19 pandemic, several said, since Black people have been disproportionately affected by rising unemployment, as well as by the disease itself.

For Nobles, her top priority is ensuring the state can maintain social services and provide support to vulnerable residents, even as lawmakers face a significant budget shortfall.

To avoid balancing the budget with cuts, Nobles said she is open to considering new tax measures targeting wealthy individuals. She said that could include a capital gains tax, which would tax profits from selling assets such as stocks and bonds.

O’Ban opposes that revenue option, which he said would open the door to a broader income tax that affects more people — not just the wealthy.

Other candidates shared Nobles’ interest in restructuring the state’s tax code, which they said puts too much of a burden on middle- and low-income families.

That kind of tax reform is a priority for by Kirsten Harris-Talley, a Seattle Democrat who is looking to succeed Pettigrew in the 37th Legislative District, as well as Sherae Lascelles, who is challenging former House Speaker Frank Chopp in Seattle’s 43rd Legislative District.

Shirley Sutton, a Black woman who is running against Democratic state Rep. Cindy Ryu of Shoreline, also has spoken of the need to boost public assistance — not cut it — during the pandemic. Sutton is a former Lynnwood City Council member.

But they also want to reduce regulations and limit taxes during this period of economic recovery — not seek out new tax measures, she said.

“We need to make sure we don’t increase those taxes and those burdens on those small businesses, because that is our tax base,” said Maycumber, R-Republic.

Harris-Talley, who lives in Seattle's Rainier Valley, said that as a queer Black woman, she is keenly aware of how past economic recoveries have left behind communities of color.

To prevent that from happening again, she said state lawmakers working to revive the economy must simultaneously work to combat gentrification, including by investing in affordable housing programs.

Harris-Talley said that’s particularly important in an area as diverse as the 37th Legislative District, which includes the Central District, Rainier Valley, Skyway and parts of Renton.

“That diversity is built, quite frankly, on racist policies, such as redlining,” said Harris-Talley, who is the interim executive director of NARAL Pro-Choice Washington. “Being pushed out of communities because of affordability is not the way folks should be treated.”

Harris-Talley is up against five other candidates in the race to succeed Pettigrew, including Chukundi Salisbury, one of a handful of Black men running for legislative seats this year.

Lascelles, a community organizer who identifies as Black femme and uses they/them pronouns, said that even if more Black women are elected this year, a diversity of Black voices will still be needed in Olympia, including those of nonbinary people who don’t consider themselves strictly male or female.

“It’s not an accident that Black trans [people] and Black femmes have a really short life expectancy in this environment,” Lascelles said.

Franklin, the former Tacoma senator, said Black women have played leading roles in many social justice movements over the years, such as helping win women the right to vote. But they haven’t always gotten credit.

Often, their work went unacknowledged as they were kept out of the spotlight, she said.

The number of Black women running for office this year makes her think that might be changing.

“We were left out of history,” Franklin said.  “It is time we are a part of what is happening in our country in order for it to move forward.'“