Between high decibel levels and police inaction, tensions are building between the Church at Planned Parenthood and the facility. 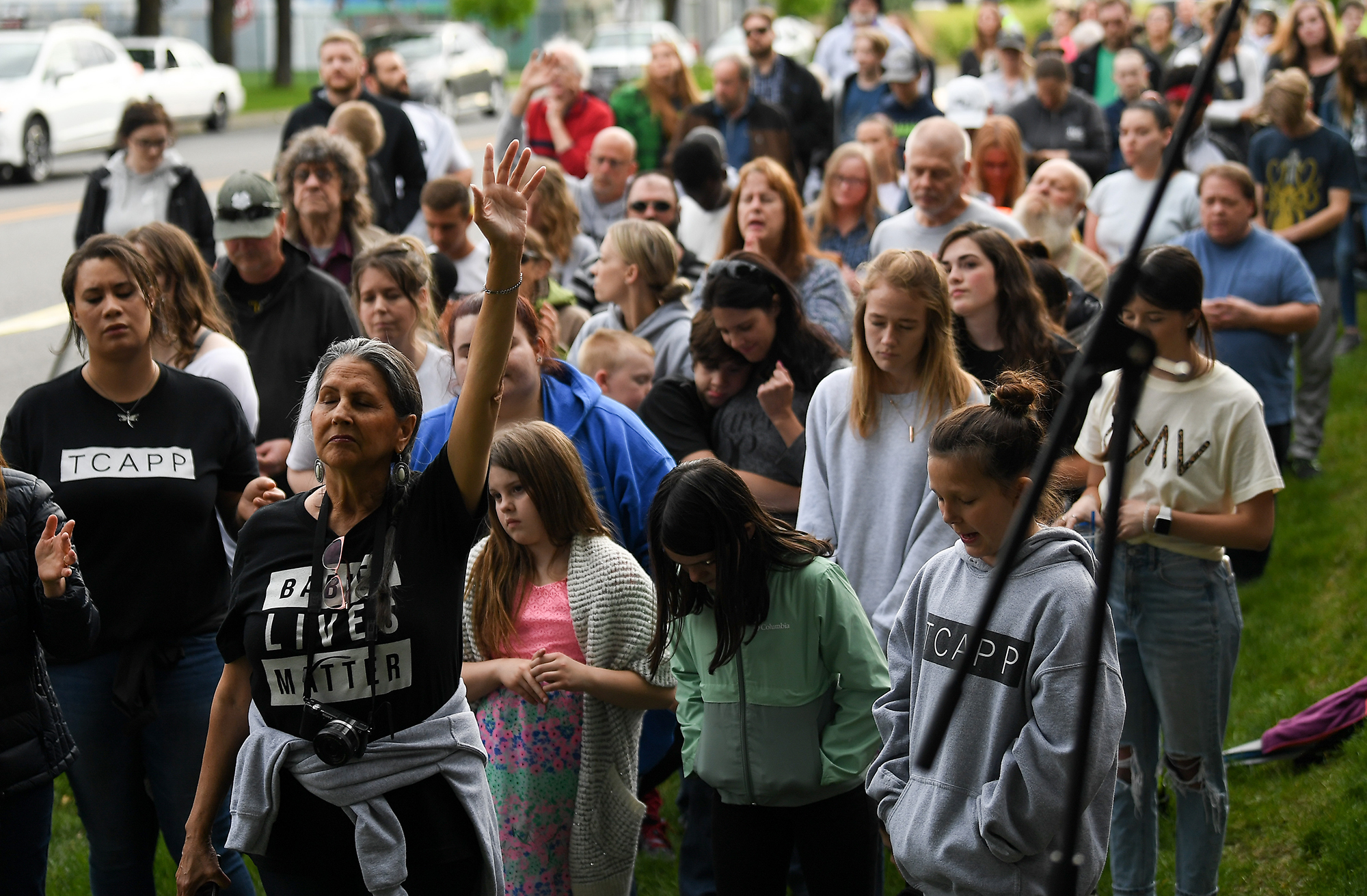 Christine Stickelmeyer raises her hand during a devotional song sung by her son, Gabe Blomgren, during a protest and church service led by The Church at Planned Parenthood on May 19, 2020 at the Planned Parenthood healthcare facility in Spokane. (Tyler Tjomsland/The Spokesman-Review)

The debate over whether a Spokane religious group can hold services in front of a Planned Parenthood facility is getting so loud and heated that it is headed toward a courtroom, where noise ordinances, the right to health care and the First Amendment are all likely to be debated.

The religious group calls itself The Church at Planned Parenthood, or TCAPP, and those who attend hear sermons and sing worship songs, all broadcast over a PA system. Their services include anti-abortion guest speakers and pastors from around the country.

But Planned Parenthood has been measuring noise levels, which its officials say are disruptive, intimidating, detrimental to the health and safety of staff and clients, and go above the legal decibel limit of city and state noise ordinances. In June, they’d had enough, so they filed a lawsuit against Covenant Church, which started the mobile ministry.

Covenant Church pastor Ken Peters, who founded TCAPP, said he chose to host services outside the facility for a reason.

“We want to get as close to Planned Parenthood as we can, because the closer we are, the bigger the statement that it makes,” Peters said. “It makes a statement that we disagree with what they're doing.”

Paul Dillon, vice president of public affairs with Planned Parenthood of Greater Washington and North Idaho, said the sound is so loud that it’s damaging to the health of clients. Patients and staff can hear the songs and sermons throughout the building and inside exam rooms, so much so that they’ve had to shuffle patients to different rooms just to be able to provide care, Dillon said.

“It's really, really frustrating and should not be allowed to happen, when the laws are very clear in Washington state and the city of Spokane about interference with health care facilities,” Dillon said. “It’s extremely unnerving for the patients at Planned Parenthood.”

Substantial research has been completed about the negative health effects of excessive noise on patients, which is precisely why Washington state has a statute limiting noise outside of medical facilities, said Kim Clark, senior attorney with Legal Voice, which is representing Planned Parenthood in the lawsuit. Clark said the noise is so loud sometimes that staff can’t hear each other when speaking, they lose their train of thought, and headphones can’t cancel it out.

“Staff have reported that patients will be crying in the middle of their exams,” Clark said.

Peters, the pastor, said the services aren’t intended to be disruptive at all — that, in fact, he would gladly switch to 7 p.m. services to stop the lawsuit. But Peters hasn’t changed the time. He thinks that the time of services aren’t Planned Parenthood’s real concern, that it’s more about the health facility disagreeing with TCAPP’s mission.

“We’re not there to stop their business. … We’re there to worship God and pray for the end of abortion,” Peters said.

About 150 people showed up for TCAPP’s first service in October 2018, but since then, the gatherings have grown to over 400 by Planned Parenthood's count and over 700 by TCAPP's.

Planned Parenthood's Dillon says it’s not about singing, or sermons, or worship. It’s about politics. The group portrays itself as just a bunch of singing Christians, he said, but he thinks their goal is to shut down Planned Parenthood.

Journalists have measured the sound from the services at above legal decibel levels, as has Planned Parenthood. While police monitor most every TCAPP service, they have never cited the group for a noise violation.

Legal Voice’s Clark said the Spokane Police Department has given Planned Parenthood multiple reasons why the police haven’t enforced the law. But, ultimately, they’ve never taken action against TCAPP, no matter how loud and disruptive the services may get.

“In fact, it is the impression of both the staff at Planned Parenthood and the church itself that the police are on the side of the church,” Clark said.

Peters said they “work hard” to stay below legal noise ordinance levels, but that the city council, which passed the ordinance in March 2020, is “all pro-Planned Parenthood.”

“We know they’re there with their little sound meters and yeah, it’s just a stupid game,” Peters said. “But we’re doing everything we possibly can to comply with the sound ordinance and still be able to do what we feel is our First Amendment right.”

Dillon said the lawsuit was really a “last resort” for Planned Parenthood, because its patients should not have to face hurdles to basic health care.

“Nobody deserves shame or stigma or bullying or intimidation, which is the goal of this group. Those are the tactics that they use,” he said.

Peters responded jokingly when asked about Planned Parenthood staff’s feelings of being intimidated.

“Some of our singers, they sing quite off-key. So that could scare a lot of people, I understand,” Peters said. “I guess church scares some people. But it doesn’t seem like any sort of threat to me.”

Dillon said Planned Parenthood also is concerned about the involvement at TCAPP services of Proud Boys, a group designated as a hate group by the Southern Poverty Law Center because some members voice white supremacist or anti-Semitic ideologies.

Peters didn’t even know what a Proud Boy was until people accused him of being associated with them, he said, and lumping them in with extremist groups isn’t accurate. But Peters said he can’t control who comes to his services.

“It’s city property. I cannot control who comes and who doesn’t,” Peters said.

Alisha Merkt, 33, said she used the Spokane Planned Parenthood in her early 20s when she was uninsured. She went in for a pregnancy test, which was negative, but she left with a year’s worth of free birth control, thanks to Planned Parenthood’s program for low-income patients.

She now has health insurance through her employer, but stays involved as a volunteer at Planned Parenthood’s events. During one volunteer stint, she offered to help keep protesters from TCAPP off the facility’s property.

Merkt described the very tense atmosphere that day as “disheartening.” This was partially because TCAPP provided unfactual information about abortion, she said, and also because of the service's “incredibly loud,” disruptive presence.

“I felt powerless. I felt really — I don't want to say discouraged — but if they were staying off the property, I could only stand there and watch in horror,” Merkt said. “It was just a lot of negative energy and standing there knowing that, aside from making sure they stayed off the property, there was nothing else I could do, despite them disturbing patients inside and upsetting the staff and upsetting volunteers like myself.”

Merkt said that Planned Parenthood saved her life back when she couldn’t afford health care. She said she thinks a lot about the inconsistency she sees with TCAPP, whose mission is to end abortion, yet protests against a health care facility that provides family planning.

According to 2018 data, abortions made up only a little over 3% of Planned Parenthood's total services, which include family planning, treatment for sexually transmitted infections, cancer screenings and wellness exams.

“Until they start thinking outside that very narrow viewpoint, they're going to keep pushing their agenda on everyone else because they feel it's their responsibility to save the people or to prevent these abortions,” Merkt said. “But they don't care outside that what actually happens to the person. It’s very selfish.”