On both sides of the aisle, people wonder what happened to Gorton’s brand of collaborative, civic-minded conservatism. 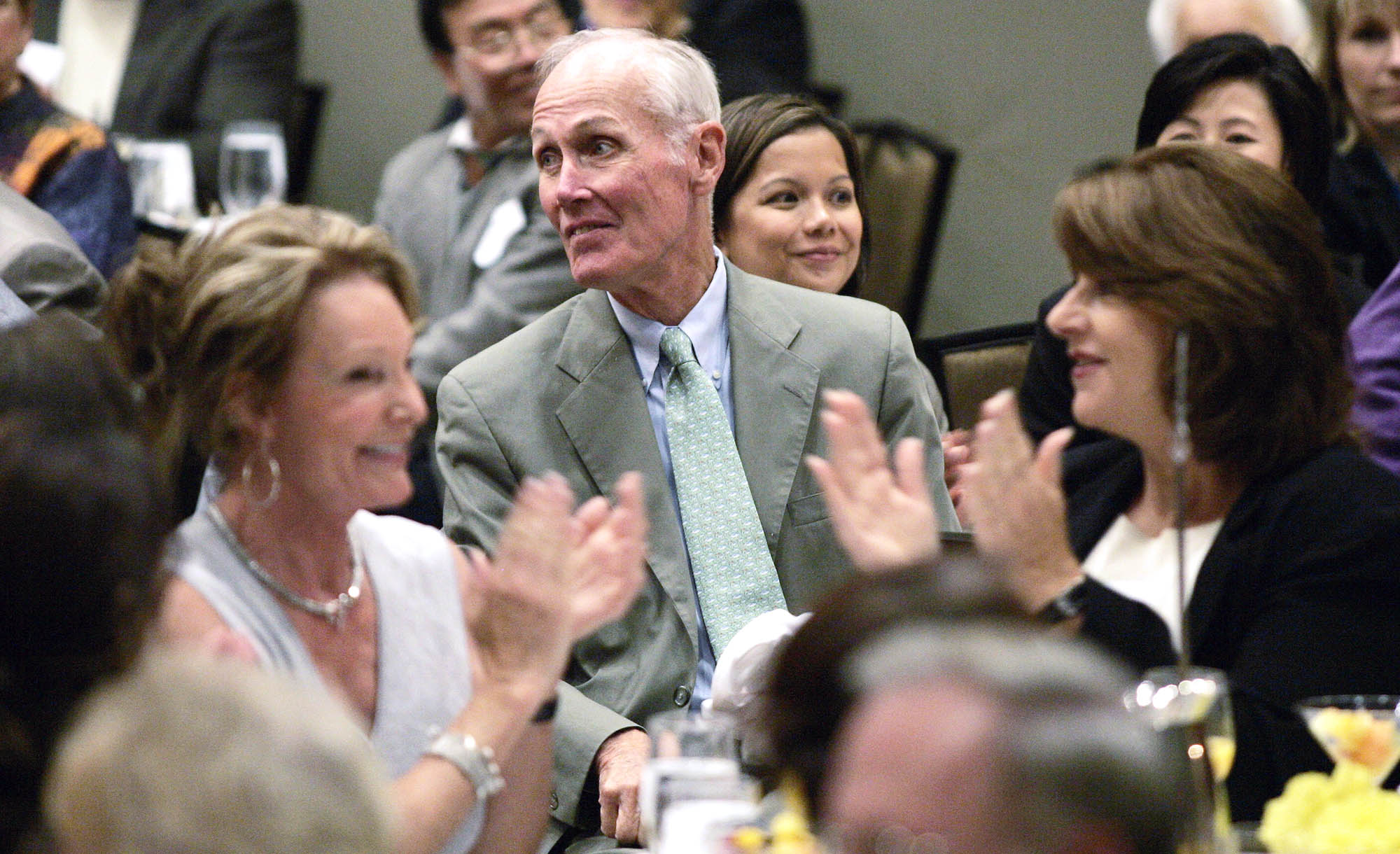 In this Aug. 30, 2006, file photo, former Republican Sen. Slade Gorton, center, is introduced at a fundraiser for Republican Senate candidate Mike McGavick in Bellevue, Wash. Gorton, who served in the Washington Legislature, and as state attorney general before he became a three-term U.S. senator, has died. He was 92. (Ted S. Warren/AP)

Slade Gorton’s brand of conservatism was once a winning model in Washington state. As a moderate Republican with an environmentalist streak, Gorton was re-elected to public office continually over four decades — first as a state legislator, then state attorney general, and then, as a U.S. senator.

On Wednesday, news broke that Gorton died at the age of 92.

To many in Washington state, Gorton’s passing was also an occasion to take stock of where the state Republican Party is today — and, whether his brand of collaborative, civic-minded conservatism died with him.

“I think he definitely represents a public servant of a bygone era, that we are really missing in politics on both sides right now,” said Chad Minnick, a Republican political consultant. “Of folks who don’t demonize the opposition, but actually see the heart of the other side, and understand we are actually working toward the same thing — just in very different ways.”

Gorton served three nonconsecutive terms as a U.S. senator, from 1981-1987 and 1989-2001, and focused on issues most people associate with Washington state but no longer with the Republican Party. While he slowed down environmental protections for public lands and dam removals on the Elwha River, he also battled Exxon after the 1989 Exxon Valdez oil spill in Alaska and sponsored legislation requiring tug escorts for oil tankers traveling through state waters. In the 1970s, he fought orca whale captures in state waters.

Gorton was seen as a strong voice of reason within the Republican Party. During his lifetime, he called for the resignation of President Richard Nixon and, later on, for the impeachment of President Donald Trump.

Gorton last held office in 2000, when he was defeated that November by U.S. Sen. Maria Cantwell.

As it stands today, Washington state hasn’t had a Republican governor in more than 35 years. And, since Gorton’s 2000 defeat, no Republican has held a U.S. Senate seat in Washington.

A moderate Republican candidate for governor, Raul Garcia, failed to advance in the Aug. 4 primary election. Instead, a much more conservative, populist candidate, Loren Culp, is advancing to the November election on the Republican ticket.

“You could argue that it has been 20 years since [Gorton’s] part of the Republican Party has been viable in Washington state,” Dotzauer said.

In previous decades, Gorton was part of a long line of Republican leaders in Washington state who worked across the political aisle to get things done, Dotzauer said. That long tradition included former U.S. Rep. Joel Pritchard and U.S. Sen. Dan Evans, who was also Washington governor, Dotzauer said.

“It said, ‘you ran a perfectly strategically driven and well executed campaign,’ ” Dotzauer recounted Wednesday. “That was a personal note from him, after he lost. Now, that’s a pretty classy thing to do, right?”

In his last months, Gorton had supported Garcia’s campaign and tried to get other Republicans to rally around the moderate Republican doctor from Yakima. It didn’t work.

Former Washington Attorney General Rob McKenna doesn’t read too much into that. McKenna, who also supported Garcia, was attorney general through 2012, when he ran for governor and lost to current Gov. Jay Inslee, a Democrat.

“I would say that Gorton’s brand of principled, pragmatic conservative politics still carries on — not only in people like me, but also in people like [state House Minority Leader] J.T. Wilcox and [Pierce County Executive] Bruce Dammeier,” McKenna said.

Both Dammeier and Wilcox are known as consensus builders in their parties. They also were widely talked about as potential candidates for governor this year, but both decided not to jump into the race.

On the other side of Lake Washington, cities such as Medina, Sammamish, Bellevue and Redmond once were considered GOP strongholds. As recently as a decade ago, they were places where Republicans had a good shot at winning.

Now, those areas are largely represented by Democrats — and, increasingly, more people of color.

Seferiana Day, a Democratic political consultant, said the diversification of King County’s suburbs has led to more women, people of color and Democrats representing those areas over time.

That trend can also be seen in cities south of Seattle, such as SeaTac and Tukwila, which have become much more diverse in recent years. Recently, more people of color have won local elections in those communities, Day said.

“For us, on the Democratic side, it is important for us to be pushing new candidates and more representation, to move the party forward,” Day said. “And I don’t know what the Republican equivalent of that is.”

State GOP Chair Caleb Heimlich said Gorton’s legacy lives on in some of the successful Republican politicians he has mentored, including U.S. Rep. Cathy McMorris Rodgers in Eastern Washington.

Heimlich added that this month’s primary results included some bright spots for the Republican Party in Washington state, even in some of the suburban King County communities where GOP influence has slipped.

First-term Democratic U.S. Rep. Kim Schrier, for instance, received a lower share of votes in the Aug. 4 primary election than the multiple Republicans running to represent the 8th Congressional District, which includes Sammamish and Issaquah. Schrier’s 2018 victory over former GOP state Sen. Dino Rossi turned that seat from red to blue, but now Republicans see her as vulnerable.

“People have been saying the Republican Party is dead in Washington state — and after the primary, we are poised to pick up seats in the state Legislature,” Heimlich said.

“No question there are geographical realignments, there are changes in the political dynamics, but it's certainly not all negative for the Republicans.”

Still, there aren’t many Republican leaders in Washington state who have gone as far as Gorton did in denouncing Trump. And, tying Republicans to Trump is proving a successful political strategy for Democrats up and down the ballot, Day said.

Cathy Allen, a Democratic political consultant who considered Gorton a friend, said she actually told Gorton not to submit an op-ed to The New York Times calling for Trump’s impeachment. She feared the backlash he would receive from partisans on the right, she said.

“I was trying to be nice,” Allen recalled Wednesday. “I told him, ‘I can just imagine a whole bunch of the Republican Party having a heart attack over it.’”

In that op-ed, Gorton wrote: “From what I have read, it seems clear that President Volodymyr Zelensky of Ukraine was subjected to a shakedown — pressured to become a foreign participant in President Trump’s re-election campaign, a violation of the law.”

Allen said she thinks the appetite for Gorton’s coalition-building form of Republicanism is fading in Washington state and across the country. She doesn’t see it returning anytime soon, at least not on a statewide basis.

That was evident to her this month in the failure of Seattle attorney Mike Vaska’s campaign for state attorney general, she said. Vaska, a past leader of a moderate GOP group called Mainstream Republicans of Washington, lost in the primary in his bid to challenge state Attorney General Bob Ferguson. Ferguson, a Democrat, will instead face attorney Matt Larkin, a Republican who supports Trump’s re-election and is running on a law and order platform.

For instance, Minnick said, Washingtonians every day can see Gorton’s work in the Mountains to Sound Greenway, a 100-mile corridor of trails and natural areas along Interstate 90. Gorton worked to get that stretch designated as a National Heritage Area.

That’s something all Washingtonians — no matter their party — can feel good about as they drive across the mountain passes that separate the eastern and western parts of the state, Minnick said.

“It was just one of those good, positive things he wanted to do for future generations,” Minnick said. “There are so many things like that, that Slade did, that just make the world a better place where we live.”

This story was updated to add additional quotes and context, including from the leader of the state Republican Party.