Mayor Durkan said reimagining public safety is just one part of a bigger evolution the city must make to combat inequities. 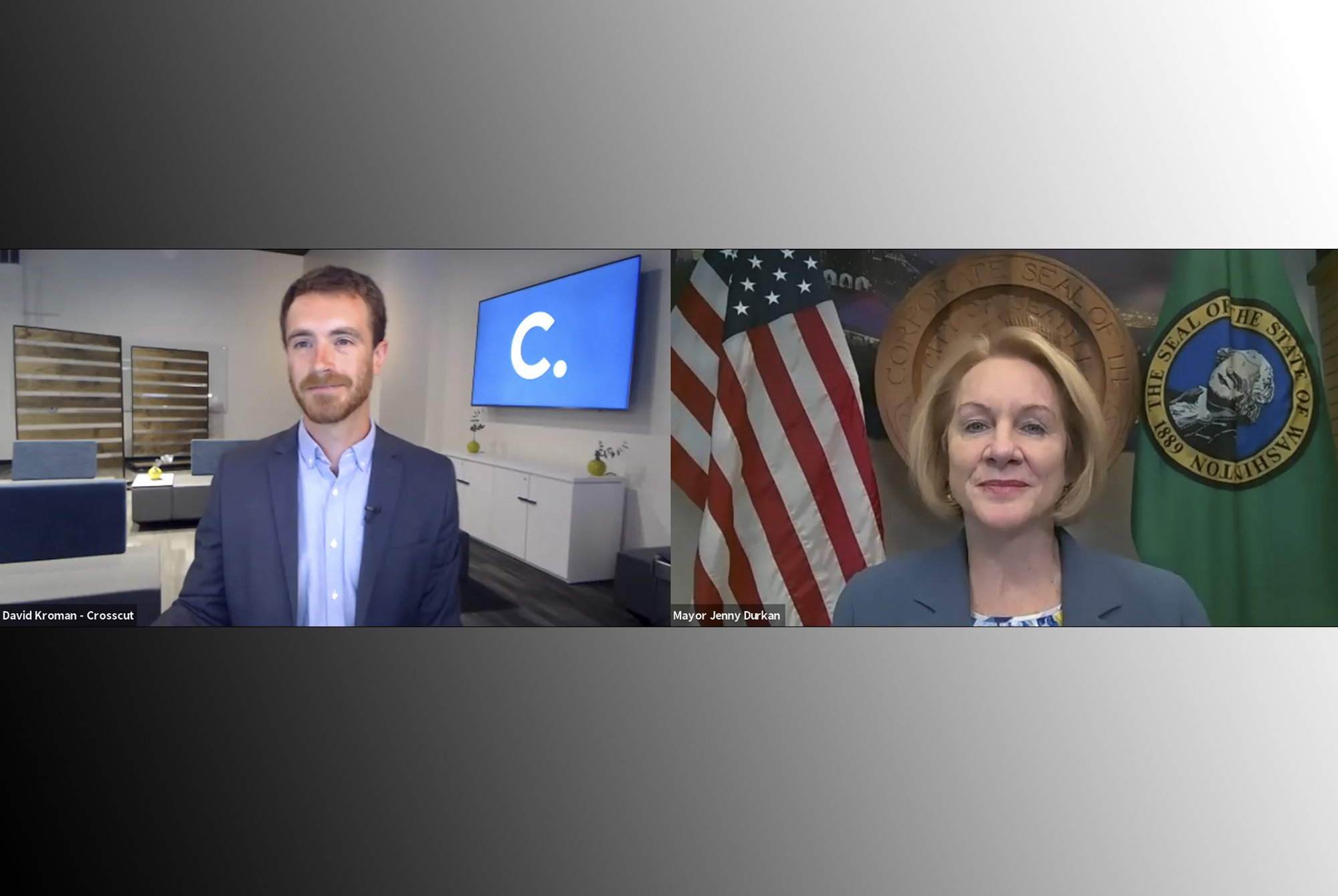 Mayor Jenny Durkan says policing will look very different years from now — not just in Seattle but across America.

During Crosscut's live Northwest Newsmakers event on Wednesday, the mayor, who has been widely criticized by both activists and business leaders for the police response to this summer’s protests, said reforming policing is just one part of a bigger evolution the city must make to combat inequities. Her list of needed change also includes affordable housing, health care, child care, good schools and greater economic opportunity.

“We have to decide not just on policing, but as a society how do we change what we’re doing,” she said in the interview with Crosscut reporter David Kroman.

Durkan said it’s not possible to separate police reform from the other investments society must make to create better communities. But when pressed for more specific changes she wants to see in the near future, the mayor said Seattle must improve its crowd control policies and actions. She said the decision in June by the Seattle City Council to ban the use of tear gas during protests — a decision overturned later by a federal judge but followed by police —  was a move in the right direction, but more needs to be done.

She wants the city to send medical personnel and social workers to help the homeless and people in mental health crises, expanding the harm reduction model Seattle has begun to experiment with. Durkan said she is looking for a culture change in the police force, from warrior to servant, but that she does not expect the day-to-day work of police to change in the next year.

When asked if she would agree to move money away from the police and toward alternative approaches, Durkan said, “The answer is yes, but I think it’s the wrong question.”

A citywide conversation involving political leaders, activists and the public is required before deciding what the police should and should not do. Then the police department should be funded to meet those expectations, she said.

“I don’t think you should be looking for some arbitrary cut,” she said, referring to an activist demand that has been endorsed by a majority of the Seattle City Council to cut police funding in half. “The size of investment we need to make in community, as the city council found out, you can’t necessarily squeeze it out of a police department.”

The mayor committed in June to spending $100 million new dollars on building community programs. Durkan said she would honor that promise when she releases her budget proposal for 2021.

Durkan emphasized that the U.S. election for president could have a big impact on the other improvements she wants to make in Seattle. She said that she believes, under a Joe Biden administration, positive changes would spread across the nation.

“This national election matters more than any election in my lifetime,” she said.

The initiatives the mayor said she would like to amplify include providing rent relief to stem evictions and prevent homelessness. Seattle’s eviction moratorium will continue through the calendar year, but the mayor wants to work with lawmakers in Washington, D.C., to bring more tax dollars back where they are needed.

Instead of a Seattle payroll tax, Durkan reiterated her support for a regional business tax to support government institutions. She said the city needs new money to improve housing, transportation and public services, including policing.

“Companies can and should do more to pay their way,” Durkan said, adding that she doesn’t want a Seattle tax to drive businesses to other parts of King County.

The mayor warned that local residents are going to start seeing effects of the coronavirus-related recession, when potholes won’t be filled as quickly, for example.

Durkan also cautioned that homelessness is probably not going to improve during the next six months, especially during the coronavirus pandemic, since public health experts say people should not be moved or disrupted. That makes removing encampments more difficult.

She said people need to have realistic expectations when it comes to homelessness. Permanent supportive housing and affordable housing are the long-term solution, she said as an example. But the region also needs to step up and build more shelter capacity.

The upcoming budget cycle will focus on many of these issues. Durkan mostly laughed off questions about her relationship with the city council, saying political debate is healthy for democracy and a part of the job. She meets regularly with individual council members, she said, claiming they have many areas of policy agreement.

Contrary to government dysfunction in the other Washington, Durkan said, Seattle is a place still getting things right and working toward a brighter future.

The event ended with questions from the audience, including one from Crosscut editor-at-large, Knute Berger, wondering if the mayor's outlook has changed since a hopeful speech in mid-February. At the time, before COVID-19 started spreading around the region, she spoke of Seattle as approaching its “golden years.”

“We cannot discount how challenging this time has been for everybody in Seattle and for its leadership. To govern through just a pandemic and its economic consequences would be more than a city like Seattle’s ever had to deal with before,” she said. She noted the civil rights uprising and reckoning the country is experiencing, the toxic political division in Washington, D.C., and the rest of the country, the shutdown of the West Seattle bridge and the recent collapse of Pier 58.

“And I still believe Seattle can get it right. And if we can’t get it right, then I really fear for America.”