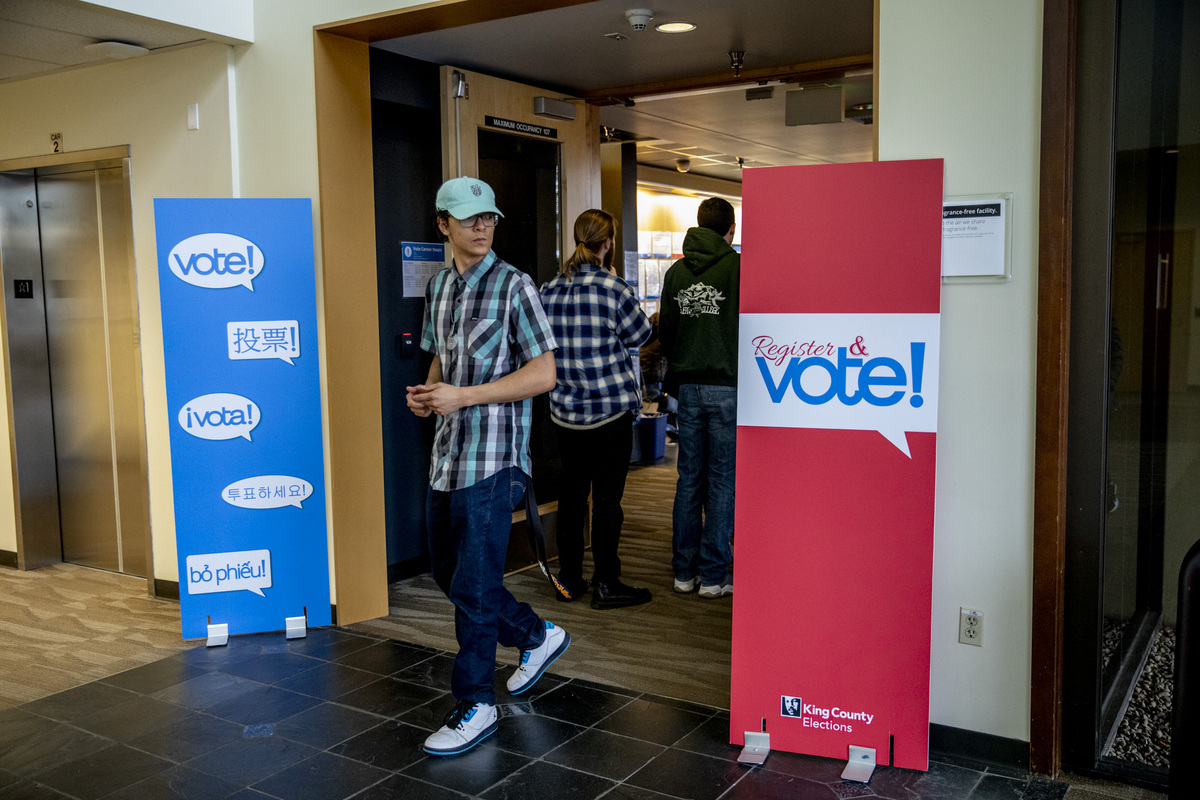 People visit the voting center at the King County Elections headquarters in Renton for Washington state’s presidential primary election on March 10, 2020. The COVID-19 pandemic has upended election norms; Crosscut is here to help you sort it out. (Dorothy Edwards/Crosscut)

After Matthew Trecha moved from one neighborhood of Seattle to another, one of the big items on his to-do list was updating the address on his voter registration.

He twice tried using the King County Elections website. He tried a third time when he updated the address on his driver’s license. But more than two weeks after his first attempt, Trecha’s online voter file still showed his old address, much to his frustration.

“I have been checking almost daily,” said Trecha, 32, who wanted to make sure he voted in the correct local races. “I’ve tried three different avenues and every time, it just doesn’t get through the system.”

A few other voters also reported similar problems updating their voter registrations in King County, the state’s most populous, with more than 2.2 million people. Those King County voters shared their stories with Crosscut through a tip line set up as part of ProPublica’s Electionland project, a partnership that investigates voting problems across the country.

As it turns out, making multiple attempts to register to vote or update one’s address doesn’t help speed the process along in Washington state. In fact, it actually makes it take longer.

“... When someone tries to register a second or third time in the online voter registration system, it actually moves the update to the back of the queue,” wrote Kendall LeVan Hodson, chief of staff of King County Elections, in an email this week.

Kylee Zabel, a spokesperson for the Office of the Secretary of State, said the new statewide voter registration system Washington launched last year, VoteWA, is designed that way. The idea is to avoid creating multiple data submissions for each voter, which Zabel said would increase the workload for county elections officials.

‘A bit slower than normal’

Halei Watkins, a spokesperson for King County Elections, wrote in a Sept. 24 email that processing of new voter registrations and address updates “has been a bit slower than normal,” partly due to the high volume of calls and emails election workers are answering. Still, Watkins said most new voter registrations submitted online are being processed within four or five days, “which is what we are shooting for.”

However, that doesn't take into account voters who may notice the delay and submit their information repeatedly, restarting the process each time.

While Watkins said having a backlog of voter registrations awaiting processing is not unusual in King County this time of year, “it is unusual to have voters check and recheck and check again” on the status of their registration. She called that “a good problem to have,” because it means voters are engaged and “on top of it.”

Watkins said processing those paper forms has been a challenge because fewer staffers are working in the office during the COVID-19 pandemic. To address that, King County Elections brought on about 25 new temporary workers last week to help with data entry. A similar number of temporary workers were hired to handle phone calls and questions from voters, which Watkins said should also help speed things up.

Watkins said King County is hiring even more temporary workers and will be entirely caught up on registrations before ballots go out in mid-October.

Not all counties are experiencing the same backlogs. Spokane County Auditor Vicky Dalton said her office was processing paper voter registrations in about 24 hours, while processing online registrations and updates within two days. That’s largely because the Spokane County Auditor’s Office is in “a physically large space,” she said, allowing workers to socially distance while working onsite to process paper forms and enter data.

Officials in Pierce County said they had processed all pending voter registrations as of mid-September — although more began flowing in last week.

Watkins said King County voters who have concerns about their registration can call (206) 296-VOTE  to check on it. Address updates can be processed on the phone in real time.

Hodson said King County elections officials will also work to identify people “who are submitting multiple updates because they are worried,” so the agency can get them the help they need.

Officials in both King and Pierce County said they weren't sure if the issue with multiple updates delaying applications was new, or if occurred in the past and people simply didn't notice it. Both counties said the problem didn't seem to be affecting many voters.

When asked if the issue signals a problem that needs to be fixed in the state's new voter registration system, state officials said no.

"The system is working as designed," Zabel said.

New arrivals: Registering to vote without a driver's license

New transplants have a different set of problems. While most people can register to vote online, that’s not an option for people who haven’t yet obtained a Washington driver’s license.

And getting a driver’s license has become tougher during the pandemic, due to closures of state Department of Licensing offices.

Thomas Charlson, a spokesperson for the Department of Licensing, said the agency’s office capacity has been significantly reduced in order to follow social distancing and health guidelines.

Only 38 of the department’s 55 driver licensing offices are open right now, and those offices are operating only at 50% capacity, Charlson wrote in an email.

Right now, the only way for people new to the state to get a Washington driver’s license is to make an appointment online. Appointments can be scheduled 30 days out, but only a few appointments open up each day — and those appointments quickly get snatched up, Charlson said.

That means people trying to get their first Washington license often find no appointment options available, and have to try again another day.

Emma Kibort-Crocker, a former Seattleite who recently moved back to the city after years of living in Louisiana, said she has been surprised by how difficult it has been to register to vote, as well as get a Washington driver’s license.

“What are you supposed to do? Wake up at 5 in the morning every morning to try to make an appointment?” Kibort-Crocker, 26, said of the Department of Licensing’s appointment system.

With the driver’s license problem making it impossible for her to register online, Kibort-Crocker said she mailed in a voter registration form twice — once in June and then again in August. Her voter registration still hadn’t been processed as of Tuesday, she said.

Part of that delay may have been because election workers were counting ballots from the Aug. 4 primary election, said Hodson, the chief of staff at King County Elections. But by now, Hodson said, Kibort-Crocker’s mail-in registration form should have been entered into the system.

Hodson recommended a specific person Kibort-Crocker should speak with to resolve the issue.

While the customer service counter at King County Elections’ headquarters has been closed by the pandemic, voters can still call (206) 296-VOTE and make an appointment if they want to get help in person, Hodson said.

Before Oct. 26, voters can also drop off voter registration forms in two specific ballot drop boxes: one by the King County Elections headquarters in Renton, and the other at the King County Administration Building, at 500 Fourth Ave., downtown Seattle.

Hodson said using either of those two drop boxes “is a little more direct way to get a form in our hands.”

“Voters need to understand that when Facebook, Google or Twitter tell you to update your registration, 7.6 million Washingtonians are potentially getting the same message,” Haugh wrote in an email. “It can take our team several days to catch up.”

Other voter registration problems and tips

This story was updated to include additional comments from the Office of the Secretary of State.