The two candidates gave voters a clear choice on the issues and offered up two distinct leadership styles. 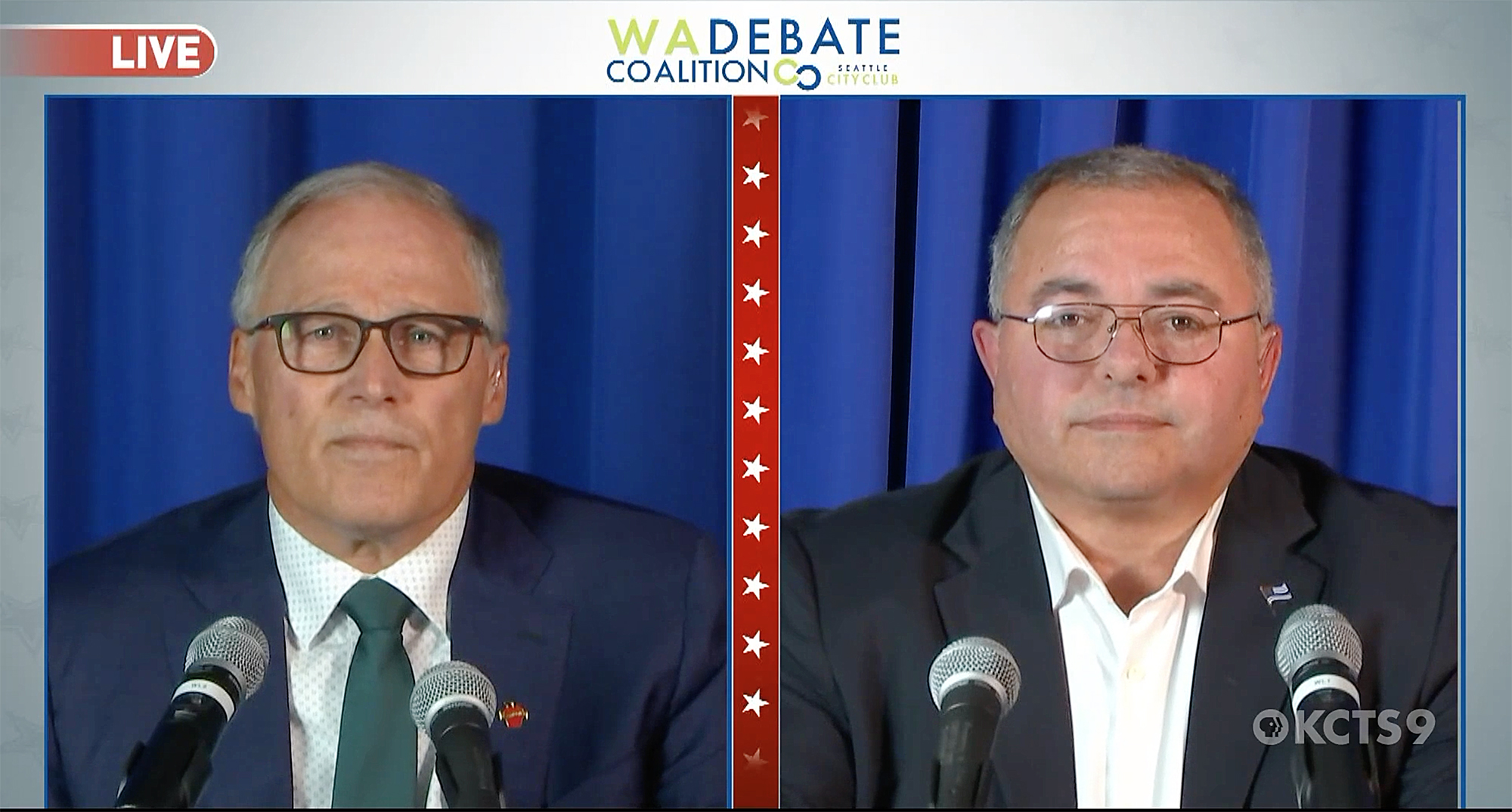 Screenshot of Gov. Jay Inslee and Police Chief Loren Culp during their debate on Wednesday, Oct. 7.

Gov. Jay Inslee and his Republican challenger, Loren Culp, debated Wednesday over whose leadership style would best serve Washington and help the state overcome the pandemic, civil unrest and an economic downturn.

The gubernatorial debate, coordinated by the Washington State Debate Coalition, illustrated how sharply the two-term governor and the police chief of Republic, a town in northeast Washington, disagree on every issue facing the state and even on the nature of the governor’s job.

Unlike last week’s presidential debate, this gubernatorial contest was tightly controlled by four moderators, including Crosscut political reporter Melissa Santos. They covered a lot of ground in an hour and did their best to keep the candidates on topic.

The candidates, who were in separate rooms from each other and from the moderators as a precaution against the spread of the coronavirus, sniped at each other on occasion, but never interrupted and rarely even talked past their allotted times.

Voters across Washington who watched the debate, which began shortly after the conclusion of the vice presidential debate, learned they have a clear choice in November on issues from the pandemic to the economy and the environment.

On the coronavirus, Inslee said the state must stay the course and keep restrictions in place to save lives. Culp said he wants to open the economy back up, provide residents the information they need to stay safe from the virus and let them make their own choices of how they use that information for themselves and their families.

On the state budget, which is expected to face an estimated $4 billion shortfall for the next two-year cycle, Culp said the state can cut waste and programs to bring the budget into line. Inslee said he already made substantial cuts this summer and won’t sacrifice people’s health insurance or other state assistance to balance the budget.

On Boeing, Inslee expressed his trademark optimism and said taxpayers who gave the aerospace company huge tax breaks can expect Washington will see Boeing jobs return when the airplane market rebounds. Culp, a former construction business owner who now serves as police chief in Republic, said Inslee doesn’t know as much about business as he does.

When asked about systemic racism in law enforcement, Culp sought to hold the governor accountable. Inslee said the state needs to focus on more than the racial disparities in criminal justice.

“I think this is a window to do much more,” the governor said, adding that racial disparities in education and health care are two other areas that should be explored.

Culp moved a discussion about police reform into a conversation about Washington’s mental health care system, which he called "a joke." The governor agreed that more needs to be done to improve mental health care, but said he worried that Culp and President Donald Trump would seek to take people’s health insurance away, making such care unaffordable.

Inslee repeatedly mentioned Trump during the debate and one time even called Culp a “mini-Trump.” Culp accused Inslee of controlling people’s lives, wasting taxpayer dollars and not following the state constitution.

Both candidates spoke around the moderators’ questions concerning the recent protests, each offering their own version of what happened in Seattle at the height of the demonstrations following the killing of George Floyd in Minneapolis.

Culp said Inslee is soft on crime, has released violent criminals back into the community and stopped the Washington National Guard from bringing firearms into a riot. Inslee said that was the decision of the guard’s commander — but he agreed that it was a prudent choice to avoid escalating the violence.

Inslee took another opportunity at that point to jab at Culp for being a law enforcement officer who won’t enforce the law because of his stand against enforcing Initiative 1639, which banned the sale of semiautomatic rifles to people under 21.

Culp said police officers have discretion about how and which laws they will enforce, mentioning that not everyone gets a ticket when they’re pulled over for a possible moving violation.

On the environment, Inslee said he’s the only candidate with a plan for dealing with climate change and growing wildfires. Culp responded that Washington’s forests need better management. Inslee suggested Culp talk to Trump, who has cut the federal budget for thinning federal forests.

“Let’s talk about the real issue here, which is climate change,” Inslee said, adding that he’s worried about having someone run for governor who does not take climate change seriously.

Inslee concluded his debate performance with a promise to bring back the state's "great economy," knock down the coronavirus and keep improving Washington's education system. Culp ended with a summary of his criticisms of Inslee, saying the governor did not take responsibility for problems like crime and violence.