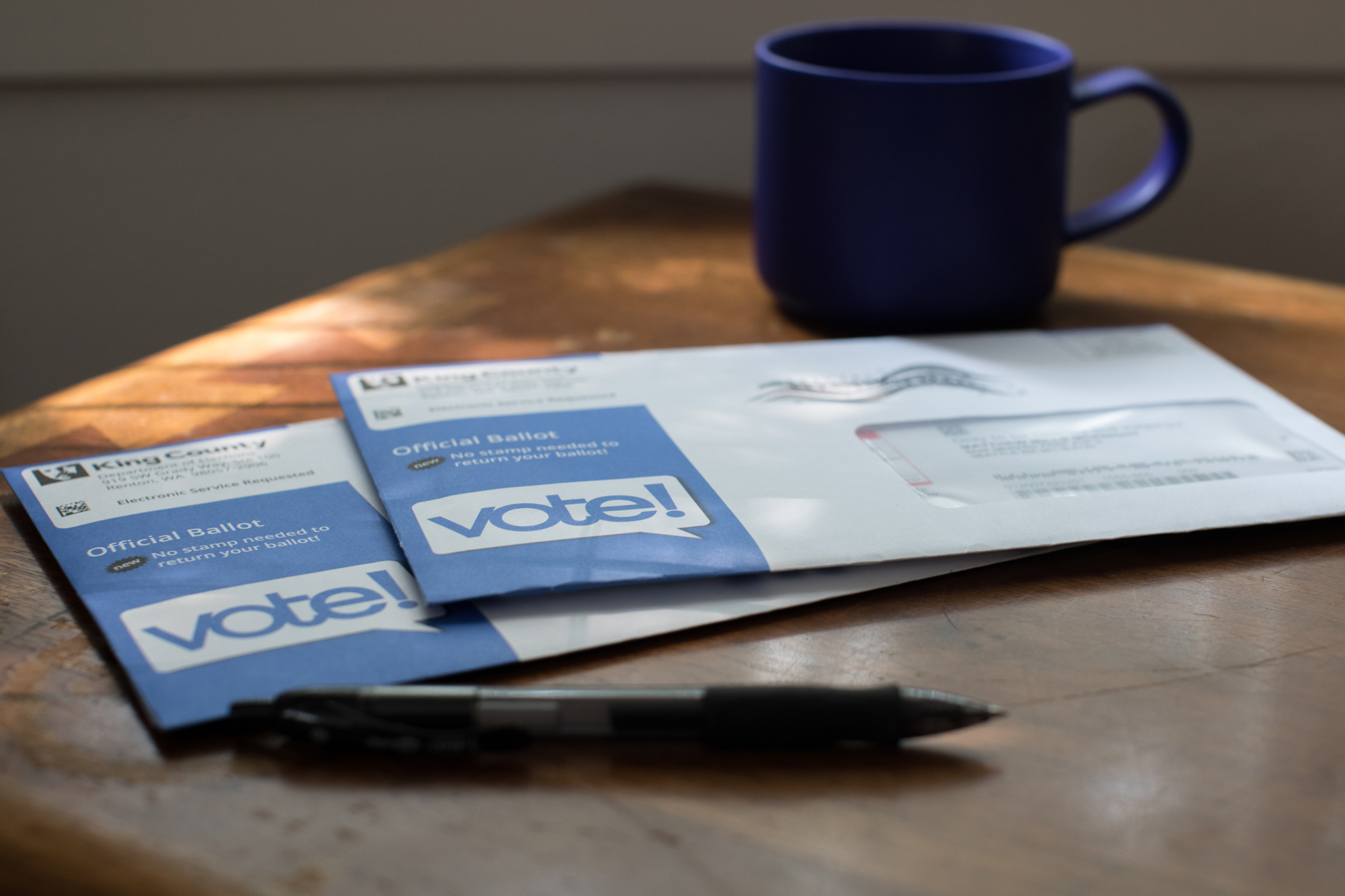 A disinformation campaign has purported that anyone can enter the state's online voter registration system and “cancel” someone's ballot if they know someone's name and date of birth. This is simply not true. (Matt M. McKnight/Crosscut)

Social media posts have gone viral in recent days claiming it is easy for anyone to go online and cancel voters’ ballots in Washington state, or to go online and actually change someone’s vote in Oregon. These claims — which originated on the anonymous online message board 4chan — are flat wrong, state elections officials say.

Some of the posts also claimed that, simply by using someone's name and birthdate, anyone can go in and change the address at which that person is registered to vote. This also is wrong; in both Oregon and Washington, a state driver’s license or ID card number is required to change someone’s voter registration.

The source of the confusion seems to be the states’ online systems that allow people to mark their ballots electronically, then print them out and return them by mail or in an official ballot drop box. The online voter registration portals — MyVote in Oregon, VoteWA in Washington — do not allow people to vote online; rather, any ballots that are printed from the sites must still be returned, processed and verified just like other ballots. Overseas and military voters have the option of printing, scanning and emailing the ballot back with a signed declaration, but even they can’t actually submit their votes by marking the online ballot form.

“No votes can be cast or canceled online through MyVote,” said Andrea Chiapella, the legislative and communications director of the Oregon Secretary of State’s office, which oversees elections.

While it’s true that people can log in and view a specific voter’s online ballot by entering the voter’s name and date of birth, they are limited in what they can do when they get there. Not only are they blocked from changing someone’s voter registration online without additional information, they cannot view any information about a voter that isn’t already available through the states’ public voter rolls.

The system’s ease of access is designed to ensure that people with disabilities — who may require assistive technology to mark their ballots — can still use the online ballot tool, even if they don’t have a state-issued driver’s license, said Washington Secretary of State Kim Wyman, the state’s chief elections officer.

Election officials in both Washington and Oregon warned this week that if anyone prints out and returns an online ballot fraudulently on behalf of another voter, it is a crime that can and will be prosecuted.

By attempting to commit fraud through the online portal, a person would also be leaving a digital trail that would make the crime easier to prosecute, said Wyman, a Republican who has overseen Washington’s elections for the past eight years.

“If you do all of those steps, you are leaving an electronic footprint, and we would turn that over to law enforcement,” Wyman said.

Under Washington state law, fraudulently printing out and submitting a ballot on behalf of someone else would be a class C felony punishable by up to five years in prison and a $10,000 fine.

Some of the social media posts spreading disinformation about Washington and Oregon’s systems have since been deleted, but not before the inaccurate claims were picked up by far-right media outlets, including The Gateway Pundit and The Epoch Times.

The original anonymous posts used screengrabs of Washington’s online voter registration system, VoteWA, as evidence that ballots could be canceled with the push of a button online. The VoteWA system at one point showed a cautionary warning that, if users proceeded to the online ballot marking system, their original ballot would be “cancelled.”

That language has since been changed to say the original ballot would be “placed on hold” if voters access their online ballots.

Washington elections officials made that change recently in response to the inaccurate online posts, to make it clear the online system can’t actually invalidate someone’s original paper ballot. Accessing the online portal won’t affect any valid ballots that voters have already signed and submitted, if elections officials have already accepted those ballots for tabulation.

“It’s not going to cancel anyone’s vote out,” Wyman said.

What can happen is this: If someone clicks the button to access a voter’s online ballot in Washington state, and the voter has yet to return their original paper ballot, that voter’s original ballot is temporarily suspended. That’s a security measure that helps ensure only one ballot is counted per voter, Wyman said.

But if the voter ends up returning that original paper ballot after it has been suspended, election officials will take a closer look to see whether the voter recently changed their address. If there was no recent address change causing the voter to need a different ballot, election officials will lift the suspension and process the original paper ballot that was sent in, as long as the ballot’s envelope was signed with the voter’s valid signature.

If the original ballot is never returned, but the online one is sent back instead, the online ballot is the one counted — but again, only if it comes with a signature that matches the one in the voter’s registration file. 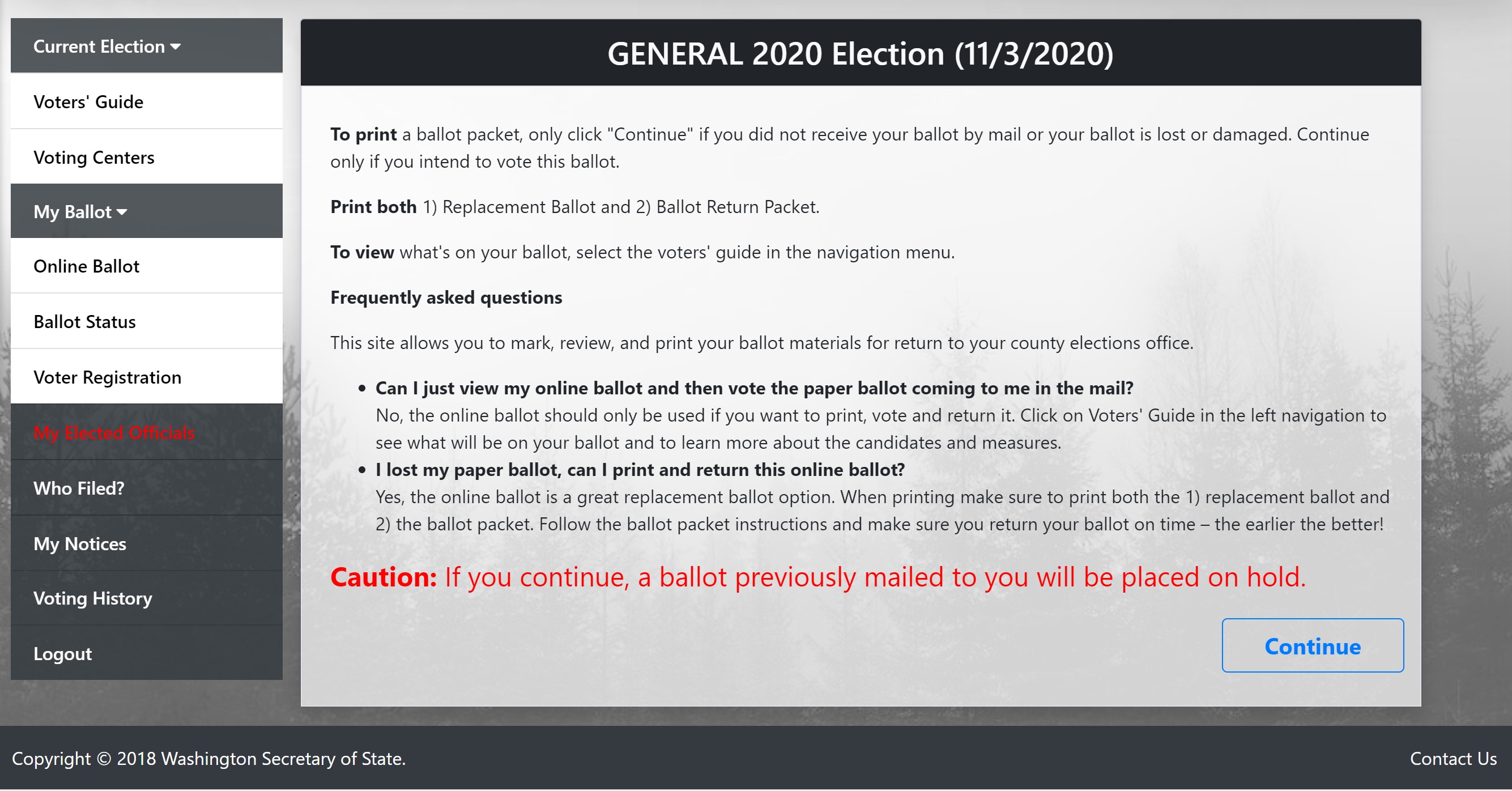 This warning message greets users of Washington state's VoteWA site if they log in and try to view a voter's online ballot. The online tool can be used only to mark a ballot or print a replacement, which then must be returned by mail or to an official ballot drop box or vote center. The ballot cannot actually be submitted online.

This warning message greets users of Washington state's VoteWA site if they log in and try to view a voter's online ballot. The online tool can be used only to mark a ballot or print a replacement, which then must be returned by mail or to an official ballot drop box or vote center. The ballot cannot actually be submitted online.

The signature check process is the main safeguard against voter fraud in the state’s vote-by-mail system. If both an online and regular ballot are returned for the same voter, with varying signatures, the only ballot counted is the one with a signature that matches the one in a voter’s registration file. The signature checking ensures that, even if outside actors print and return additional online ballots, the fraudulent votes won’t be counted.

In the unlikely case that a voter accidentally returns both ballots and signs both with their valid signature, the original ballot that they filled out and submitted — not the online one — is the one that is counted, according to state rules.

It’s a bit more complicated if a voter who recently changed their address returns two different, properly signed ballots from two different addresses. In that rare situation, the ballot suspension process helps ensure only one ballot gets counted, (Warning: intentionally trying to submit multiple ballots counts as fraud and is a felony under state law, so don't do it.)

The Washington state Democratic Party is among the groups trying to reassure voters this week that their ballots can’t be canceled online.

“Trolls on 4chan are not going to have matching signatures,” said Will Casey, a spokesperson for the Washington State Democrats.

County auditors also are also working to make sure voters know their ballots aren’t at risk.

“I am giving them a very clear message: Your ballot cannot be canceled by someone requesting a new ballot,” Thurston County Auditor Mary Hall wrote in an email.

Wyman, who is locked in a heated battle for reelection, is now facing some criticism from her Democratic challenger, state Rep. Gael Tarleton, over the warnings that have appeared on the VoteWA registration site. In a press release, Tarleton’s campaign said the earlier warning telling voters their ballots would be “cancelled” if they accessed the online ballot-marking system contributed to the misinformation now spreading online.

Tarleton said the current language telling voters that their ballot will be placed “on hold” if they view their online ballot is also insufficient. She said it should be changed to make it clearer that voters’ original ballots will still be counted if they sent them in with their correct signature.

“When the president is claiming every week that our elections are ‘rigged,’ misleading language on our voter registration system that furthers such a perception is completely unacceptable,” Tarleton said in a press release this week.

Wyman said the disclaimer language was added to VoteWA to address an issue that arose in the August primary. Back then, there wasn’t any type of warning on the VoteWA site that told voters that accessing their online ballot would cause a processing delay of the voter’s original ballot.

As a result, county auditors ended up with a large number of ballots that were suspended and required additional action — possibly because voters were logging on and opening their online ballot to simply view it out of curiosity, Wyman said.

County auditors then requested that a warning be added, so that people would know that opening the online replacement ballot would change the status of their original ballot, and potentially cause a delay, said Greg Kimsey, the auditor in Clark County in southwest Washington.

Kimsey said he’s confident in the ability of election workers to catch faked or forged signatures, in part because they are trained in signature analysis by the Washington State Patrol.

If a voter’s signature on their ballot doesn’t match what is in their voter file, they are contacted by election officials and are given the chance to correct — or “cure” — their signature in the weeks after the election, before the results are certified.