GOP fights to hold on to WA secretary of state, treasurer offices 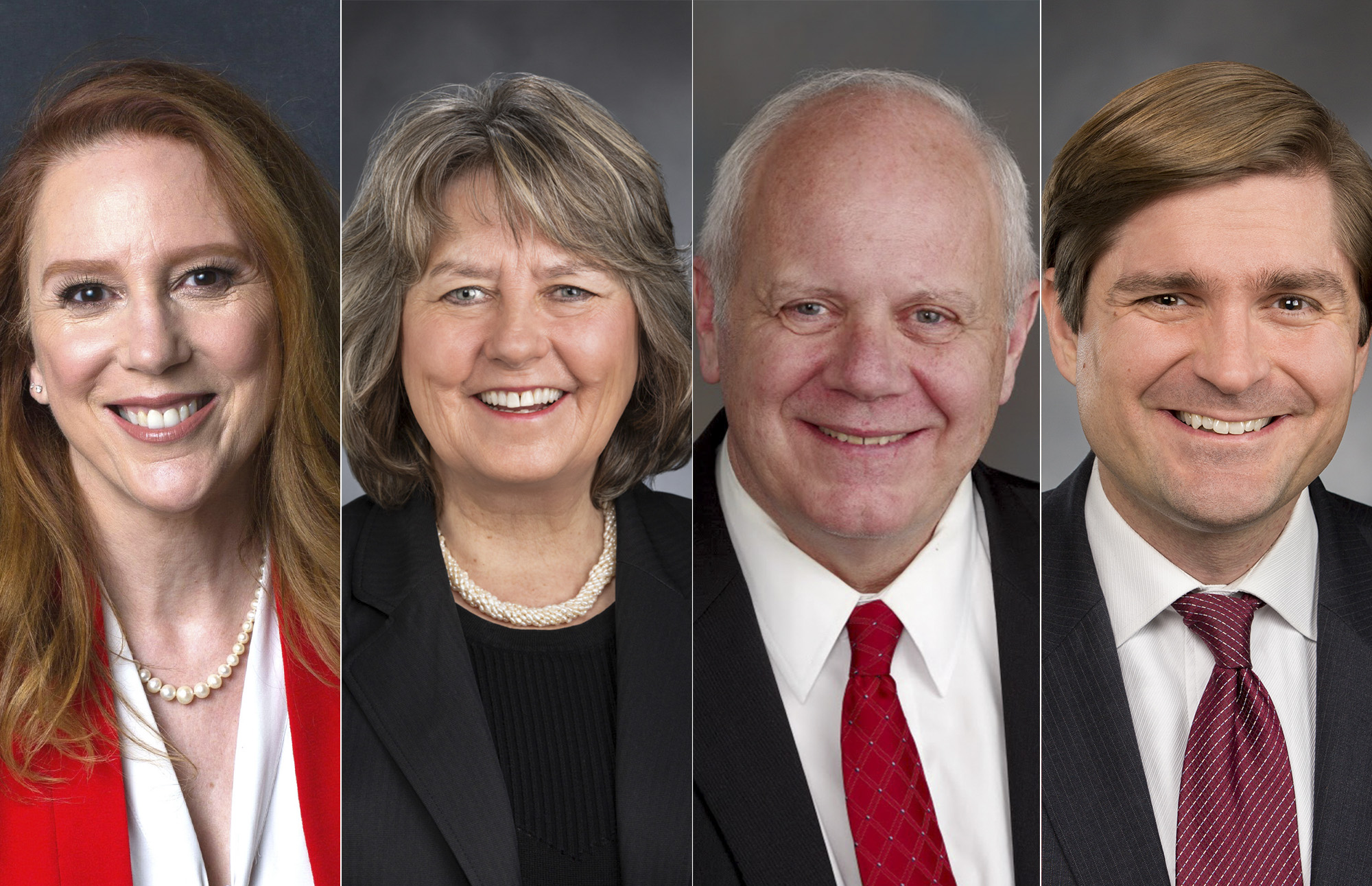 Among West Coast states, Washington is tied with Alaska for having the most Republicans in statewide office.

That’s something Democrats in left-leaning Washington hope to change in 2020, as they mount aggressive campaigns to unseat the state’s Republican incumbent treasurer and secretary of state.

The two GOP-held positions have become top Democratic targets as the party tries to gain full control of Washington state government. Democrats already control six of Washington’s eight statewide partisan offices, as well as both chambers of the state Legislature.

The Washington state contests are turning into hard-fought and costly affairs, with more than $2.2 million spent between the two races so far. In both matchups, the Republican incumbents are emphasizing their years of experience while their Democratic challengers paint them as disconnected and out of touch.

In the race for secretary of state, a job that involves overseeing the state’s elections, Republican incumbent Kim Wyman is seeking a third term. She is being challenged by state Rep. Gael Tarleton, D-Seattle, who chairs the House Finance Committee.

Wyman looks to be in the safer position, having outperformed Tarleton by about 8 percentage points in the Aug. 4 primary election.

Davidson is on less stable ground, having garnered only 47% of the primary vote to Pellicciotti’s 53%.

Washington hasn’t had a Democrat in the secretary of state’s office since 1964. Tina Podlodowski, who chairs the state Democratic Party and ran unsuccessfully against Wyman in 2016, said the heated contest between Tarleton and Wyman isn’t about Democrats ending the Republican domination of the position, but rather about who would do the best job.

“Especially in federal races, this is a blue-leaning state — and so, the Democrats are trying to make both of these really partisan campaigns and tie the candidates to Trump, when the president has nothing to do really with our state treasurer’s office and our secretary of state,” Heimlich said.

Ballots for the Nov. 3 general election should be arriving in voters’ mailboxes now. Elections officials are required to send ballots to voters by Friday, Oct. 16.

In the contest to decide who will oversee Washington’s elections, President Trump has indeed cast a long shadow, especially as he has ramped up his attacks on voting by mail — a system Washington has had in place for a decade.

Tarleton, the Democratic challenger, said Wyman hasn’t been vocal enough in denouncing Trump’s attacks on mail-in voting and the postal service. While many states are ramping up mail-in voting because of the COVID-19 pandemic, Washington has been nearly all vote-by-mail since 2011.

Wyman, who was elected as the state’s chief elections officer in 2012, has appeared repeatedly in national and local media this year promoting voting by mail as safe and secure. Often, Wyman has countered Trump’s unfounded statements that mail-in voting increases fraud, including in interviews with NPR, The New York Times, Los Angeles Times and The Washington Post.

“Our experience here in Washington does not even come close to what I am hearing the president say about vote-by-mail elections,” Wyman said in a recent Washington Post interview, adding, “The president’s comments, we just have to keep refuting with the facts.”

But Tarleton said Wyman needs to be more forceful and “address the threat from a president as, ‘This is completely false, this is a lie.’ ”

“...If a secretary of state does not say that, it allows the seeds of confusion and doubt to be sown in the mind of the voter,” Tarleton said.

More broadly, Tarleton said Wyman didn’t do enough to counter operational changes at the U.S. Postal Service that many feared could hinder the ability to vote by mail.

In particular, Tarleton said, Wyman should have joined a multistate lawsuit led by Washington Attorney General Bob Ferguson that sought to stop those Postal Service changes. In response to the lawsuit, a federal judge recently blocked the changes from taking effect.

Wyman said her approach was instead to enact a statewide rule change aimed at ensuring ballots get to voters on time. That new rule requires ballots mailed out within 15 days of the election to be sent via first-class mail, which travels faster. That way, Wyman said, voters requesting replacement ballots or changing their address in the two weeks before the election would be less likely to experience delays.

Wyman said that it is important that she stay politically neutral when administering the state’s elections, which is one reason she didn’t join Ferguson’s lawsuit.

“Our state can't afford to have a secretary of state who's going to be partisan and give voters even the perception that they're putting their finger on the scale in an election, to help one party or hurt the other,” Wyman said.

But Tarleton said Wyman was also an obstacle early on when Washington lawmakers sought to expand voting access, including through measures such as same-day voter registration and advance registration of 16- and 17-year-olds. Wyman said her office mostly commented on concerns about how those bills would be implemented on the ground. She introduced her own legislation to expand the state's voter-registration window, as well as to preregister 17-year-olds to vote.

It’s Wyman’s detailed knowledge of how elections are run that she said distinguishes her most from her opponent. Before becoming the secretary of state, Wyman oversaw elections in Thurston County, first as elections manager and later as the elected county auditor, giving her more than 25 years of experience administering elections.

Tarleton, meanwhile, said she’s better equipped to handle cybersecurity threats to the state’s elections, partly due to her experience working as a defense intelligence analyst at the Pentagon from 1981 to 1990. In that role, Tarleton advised the Joint Chiefs of Staff on nuclear threats posed by the Soviet Union. She later worked at a science and engineering company, Science Applications International Corp., leading the company’s efforts to do business in Russia, Ukraine and Eastern Europe. In that role, Tarleton also worked on contracts with national intelligence agencies.

Tarleton said she doesn’t think Wyman is remaining on top of changes in technology that could make Washington state's election systems more vulnerable to foreign attacks. She said her national security background makes her a good fit for the job, especially given Russia's recent attempts to influence and infiltrate U.S. elections.

The cybersecurity landscape has changed dramatically even since the 2016 election, Tarleton said.

“That is one of the things that we have really tried to help the secretary of state’s office understand: that the threat we were fighting in 2016 is very different today,” said Tarleton, who also served as a Port of Seattle commissioner before joining the Legislature.

Wyman said her office has been actively addressing cybersecurity threats, including by creating a state Elections Security Operations Center last year. The state isn’t broadcasting all of those cybersecurity efforts, however, she said.

The treasurer’s race isn’t always an intense affair. But in 2016, a crowded primary election produced a surprise result: Two Republicans, and no Democrats, ended up advancing to the November election in Washington’s top-two primary, exiling Democrats from an office they previously controlled.

Now, Democrats are determined to get the office back. Pellicciotti, the Democrat in the race, has raised nearly $400,000 for his campaign so far, outpacing the $200,000 raised by Davidson, the Republican incumbent. By comparison, in 2016, no treasurer candidate raised more than $180,000 during the entire election cycle.

Davidson said he is clearly the more qualified candidate because of his background working in finance. He is a certified public accountant and was elected to four terms as Benton County treasurer before taking on the role of state treasurer.

Pellicciotti’s background isn't in managing financial investments, although he has prosecuted financial crimes as a lawyer for the state attorney general's office. For the past four years, Pellicciotti has represented the Federal Way area in the state House, frequently sponsoring bills dealing with campaign finance and government transparency, among other topics.

During his first term, Davidson said he was proud of his work to refinance much of the state’s debt — efforts he said would save the state about $455 million in future interest payments.

But Pellicciotti has hit Davidson for not attending meetings of the state investment board, which decides how to invest state pension funds.

“I don’t know how the state treasurer could not want to be attending these meetings, because they’re talking about how we’re going to get out of this economic crisis that we’re in,” Pellicciotti said. “... The fact that he has other priorities boggles the mind.”

Davidson said he has delegated attending those board meetings to someone else in his office. He said he involves some of his employees in that work to draw on their expertise, as well as to help members of his team learn and grow.

“Instead of having one individual serve on all these various things, I am increasing the talent pool,” Davidson said. That doesn’t mean he doesn’t closely oversee his employees’ work, he said, or that he is abdicating decision-making responsibilities.

Davidson said he doesn’t understand why his opponent wants to see him — “this old white guy” — on every board and committee, as opposed to a wider variety of people from his office.

Pellicciotti said one of his goals, should he win election, would be to use the state’s investment power to push corporations to add more women and people of color to their corporate boards.

He also wants to create a new rule banning elected officials who sit on the state investment board — including the treasurer — from taking money from corporations that the state might invest in.

“There should not be those kinds of corporate campaign entanglements,” said Pellicciotti, who said he has made a policy of not taking corporate donations during his campaigns.

Davidson, meanwhile, said he wants to create new benchmarks for saving money in the state rainy day fund, which he said right now has fewer guidelines and less structure than similar emergency reserve funds in other states.

Davidson said he thinks Democrats are interested in the treasurer’s position not because they have a different vision for running it, but instead because they want to achieve a “clean sweep” of all statewide elected offices. Before Davidson’s election in 2016, Democrats held the state treasurer’s office for decades.

“It’s all about just winning the position back, rather than doing a better job,” Davidson said.