The lawmaker, who was accused of domestic terrorism, is being used to attack not only his fellow Republicans, but also a Seattle Democrat. 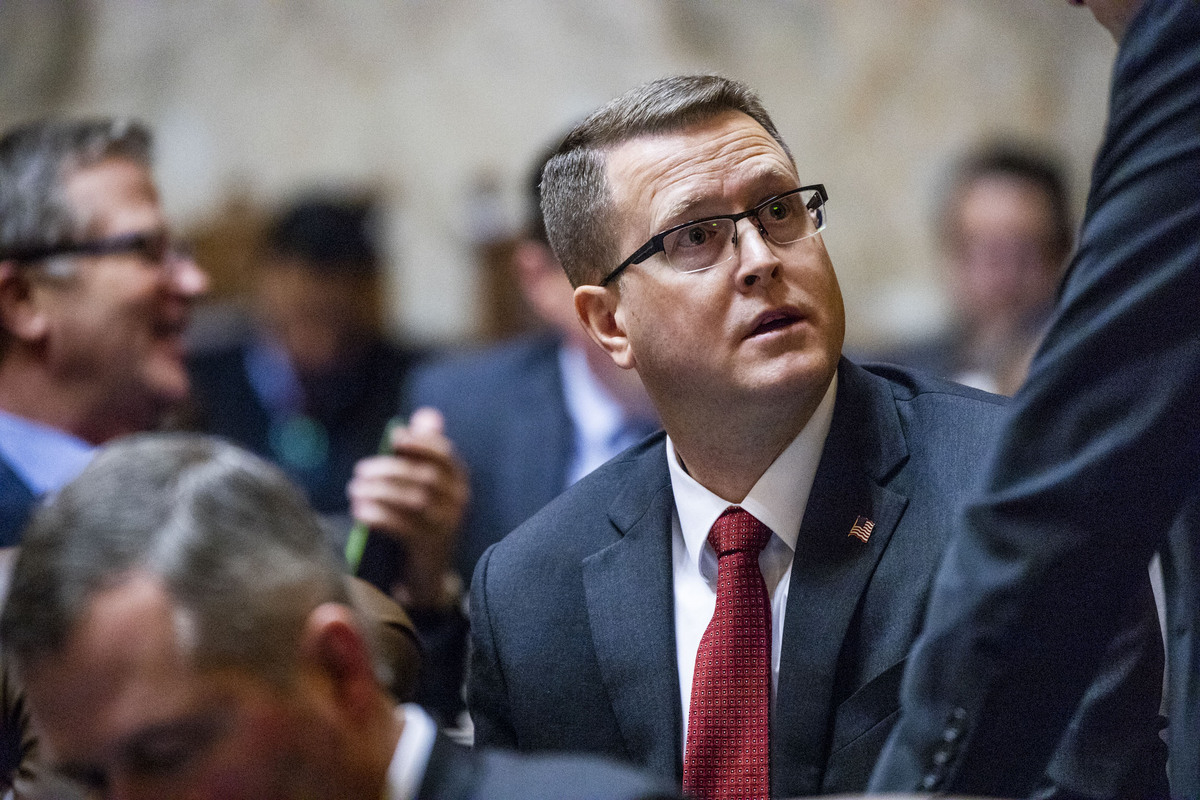 State Rep. Matt Shea, R-Spokane Valley, who isn't running for re-election, has popped up in various attack ads around the state, with candidates attempting to link their opponents to Shea and his alleged participation in domestic terrorism. (Dorothy Edwards/Crosscut)

State Rep. Matt Shea isn’t running for re-election this year. Still, the Spokane Valley Republican is popping up on the campaign trail, in attack ads that try to link other candidates to Shea and his alleged participation in domestic terrorism.

Some ads have targeted Republicans in swing districts, saying they didn't do enough to condemn their GOP colleague.

But the latest example of the use of Shea as a political bludgeon comes from Seattle, where one Democrat is attacking her opponent — another Democrat — with Shea-themed mailers.

Sarah Reyneveld, a Democrat running to represent Seattle’s 36th Legislative District, sent out a mail piece this month saying fellow Democrat Liz Berry “looked the other way and worked with a domestic terrorist,” referring to Shea.

The attack is based on Berry serving as executive director of the Washington State Association for Justice, a nonprofit that represents 2,400 plaintiff trial lawyers around the state. The nonprofit’s affiliated political action committee, the Justice for All PAC, previously supported Shea and donated to his campaign, but disavowed him last December after an independent investigation found Shea took part in three acts of domestic terrorism against the U.S. government.

“... We  find the actions of Shea totally incompatible with the principles of our mission statement, and we also believe they are a gross violation of the sacred trust we put in the hands of our elected officials,” the Justice for All PAC said in a written statement in December 2019.

Berry, who doesn’t sit on the board of the PAC and doesn’t direct its decisions about campaign donations, called the ad from Reyneveld’s campaign “deeply offensive” and “sad.”

She said she takes personal offense to the idea that she would pal around with anti-government extremists, as she previously was the Washington, D.C.-based legislative director for Democratic U.S. Rep. Gabby Giffords, who was shot in the head during a mass shooting in 2011.

“This is personal to me,” said Berry, adding, “I totally disavow Matt Shea and domestic terrorism."

Reyneveld, meanwhile, defended her campaign mailer as raising important questions about why Berry’s organization and affiliated PAC would work with one of the “worst extremists in our state,” noting that several other organizations cut ties with Shea much earlier.

Some groups demanded that Shea return their campaign donations in fall 2018, when Shea was revealed to have distributed a document called the "Biblical Basis for War," which talked about killing people who flouted Biblical laws. At the time, Shea claimed the document was a summary of Old Testament sermons, not a call to violent action.

The investigation accusing Shea of engaging in domestic terrorist acts came out more than a year later.

"I think at this moment in time we need leaders who are going to disavow, confront and condemn white nationalism," said Reyneveld, who noted that Berry's organization worked with Shea on legislation such as a 2019 measure to reform the state's wrongful death law.

“Liz and her supporters are acting outraged because they don’t want voters in the 36th District to know about these inconvenient facts,” said Reyneveld, who is an assistant attorney general. 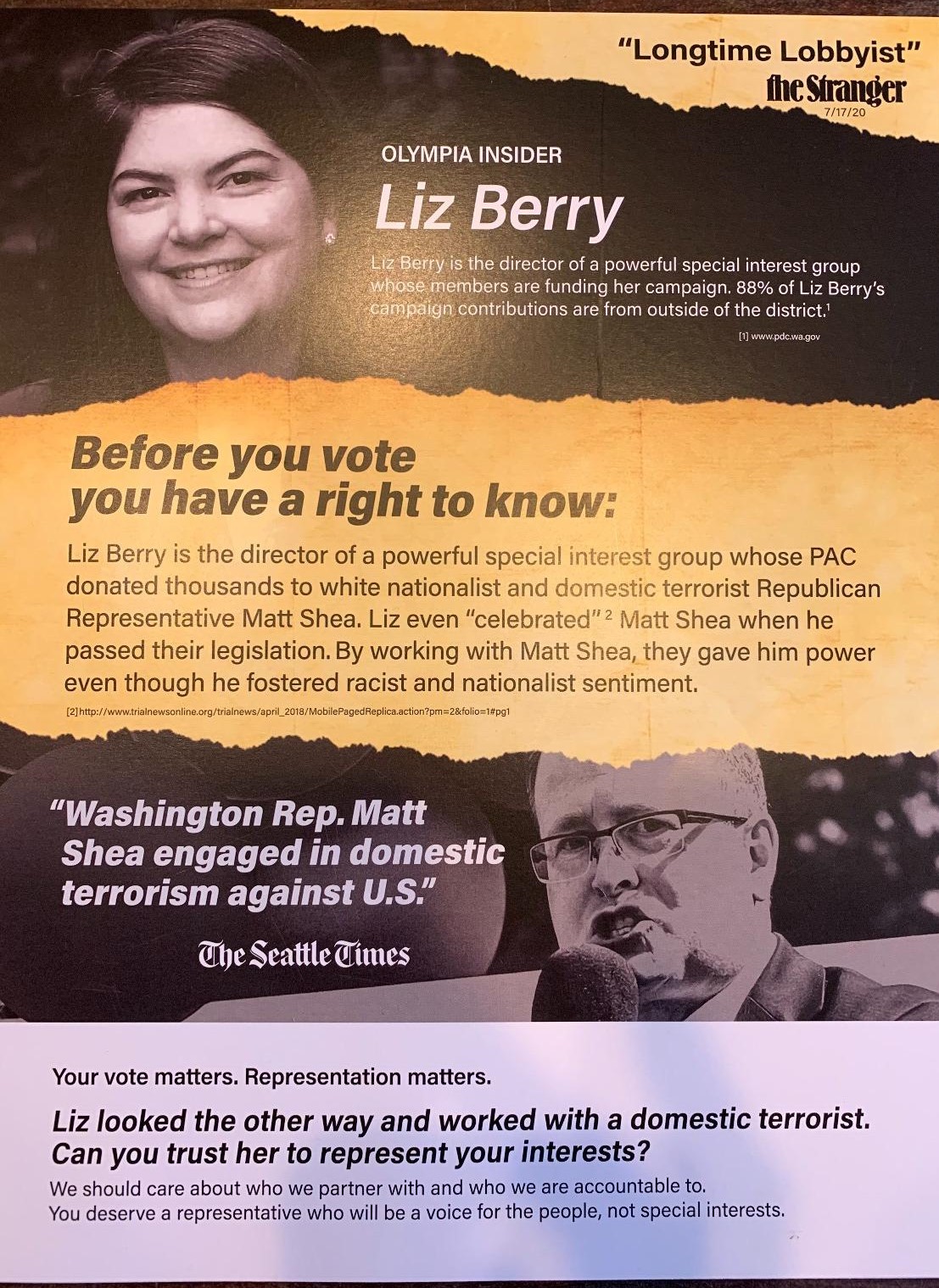 The campaign of Sarah Reyneveld, a Democrat running in Seattle's 36th Legislative District, sent this ad attacking Democrat Liz Berry as having "looked the other way and worked with a domestic terrorist," referring to state Rep. Matt Shea, R-Spokane Valley.

The campaign of Sarah Reyneveld, a Democrat running in Seattle's 36th Legislative District, sent this ad attacking Democrat Liz Berry as having "looked the other way and worked with a domestic terrorist," referring to state Rep. Matt Shea, R-Spokane Valley.

More commonly across the state this year, Shea’s history has been used to attack Republicans, not Democrats.

Before the Aug. 4 primary, a mailer paid for by a Democratic PAC slammed state Rep. Jim Walsh, R-Aberdeen, for not demanding that Shea resign after the release of the December 2019 investigation.

“Matt Shea’s own Republican leaders had enough and called on him to resign. But not Jim Walsh,” read the mailer paid for by the New Direction PAC, whose biggest donors are Democratic PACs.

Meanwhile, a website paid for by the House Democratic Campaign Committee criticizes another GOP candidate, Jennifer Sefzik, for being part of an organization that supported Shea. Sefzik, who is running in the 42nd Legislative District, is active in the Whatcom County Republicans, which passed a resolution supporting Shea earlier this year. The same resolution criticized Wilcox for suspending Shea from the House GOP caucus, as well as Wilcox’s call for Shea to resign.

Wilcox isn’t taking any of that personally; he’s supporting Sefzik’s campaign. On Friday, he said it doesn’t appear that the Shea-based attacks have worked very well so far.

Walsh, for instance, got almost 58% of the vote in a three-way primary in August, despite the attack mailers blanketing his district in southwest Washington.

Wilcox said it’s clear Democrats were geared up to launch a slew of attacks tying legislative Republicans to Shea, but those attacks were “deflated” by Shea’s decision not to run again, as well as House Republicans disciplining Shea immediately and calling on him to resign.

Now, Wilcox said, it appears to him that Democrats are turning their unused Shea ammunition against each other.

“I think it’s comical,” Wilcox said. “They are very frustrated that Republicans took action, so the issue didn’t exist in the way that they thought it would exist.”

While Wilcox and House GOP leaders expelled Shea from their closed-door caucus meetings and stripped him of committee assignments, they didn’t push for him to be kicked out of the Legislature entirely — something that would have required both Democratic and Republican votes. 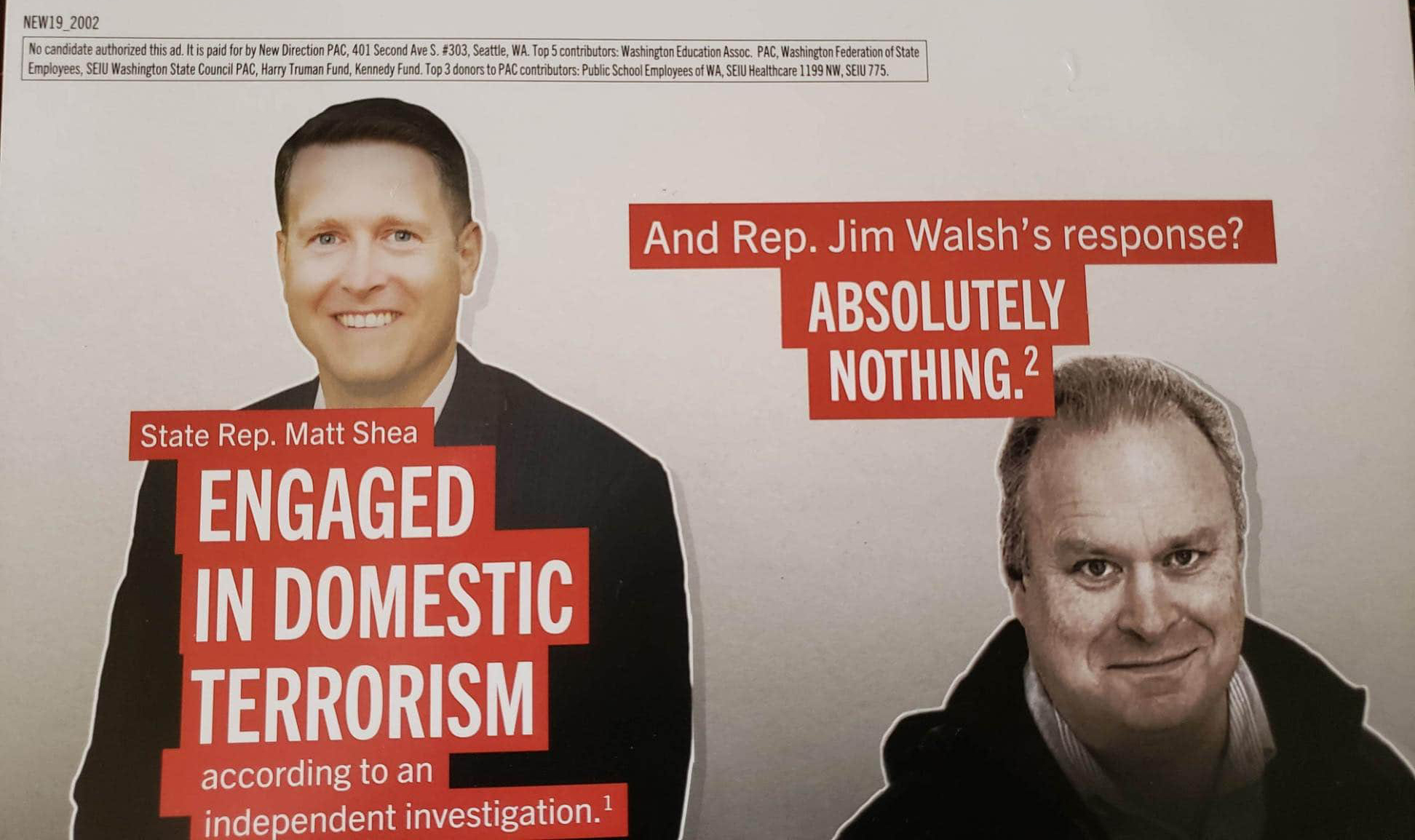 In Seattle, the use of Shea in the ad against Berry has drawn condemnation, including from some public officials, such as state Rep. Noel Frame, D-Seattle.

“To insinuate that Liz in any way, shape or form supports domestic terrorism and white nationalism because of a very weak link between decisions made by her employer to work with Representative Matt Shea is RIDICULOUS,” Frame wrote on Facebook. By the logic expressed in the mailer, Frame said she, too, could be considered a supporter of domestic terrorism for supporting a bill that Shea had sponsored, even though she later called for him to be expelled from the Legislature.

Robert Cruickshank, a member of the 36th Legislative District Democrats, said the mailer signals an attempt by one candidate to distinguish herself from a similar opponent who shares many of the same views. For instance, both candidates strongly support increasing taxes on the wealthy, building more affordable housing, increasing money for public education and expanding access to child care.

“I know them both and I can’t tell you right now what a policy difference is between the two,” said Cruickshank, who serves as president of Washington’s Paramount Duty, a group that advocates for progressive taxes to pay for public education.

“... I think that is why, as ballots hit mailboxes, people are starting to get a little chippy with each other and try to find any advantage they can,” he said.

Cruickshank said he voted for Berry in the primary, but next month plans to vote for Reyneveld, after she clarified that she doesn’t support laying off state employees as a way to resolve the state’s current budget shortfall. Reyneveld works with Cruickshank as a board member for Washington’s Paramount Duty.

The two women both say they want to avoid cutting programs as a way to balance the state budget, but Berry has been more emphatic on that point, saying she is "unequivocal in holding the line against budget cuts next year." Reyneveld said she might look at cutting certain programs that disproportionately disadvantage people of color, such as spending on prisons, as a last resort if new tax revenue isn't enough to close the budget gap.

In a campaign email last week, Berry labeled the Shea attack ad as an act of desperation by Reyneveld, who trailed Berry in the primary.

“I will not attack another woman to win this race,” Berry wrote, adding that she and Reyneveld were part of the same book club and took their kids to Woodland Park Zoolights together last year.