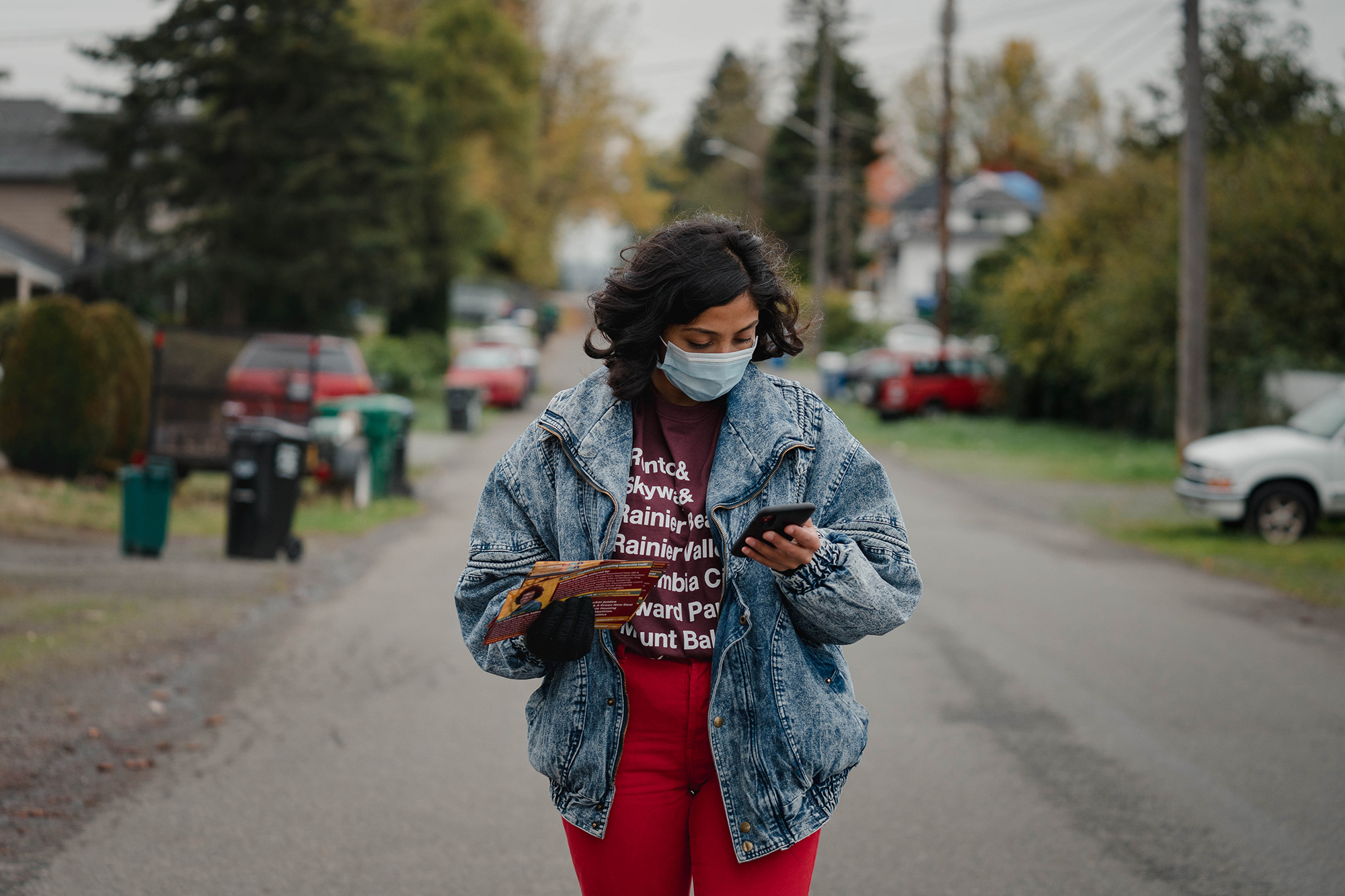 Political action used to be deliciously personal for Sharada Rayan.

Rayan, 26, would host pop-up banana leaf dinners at her apartment in Seattle’s Central District neighborhood, introducing acquaintances to the South Indian cuisine she was raised on. The meals were seasoned with the subtlest sort of politics, of building community, community Rayan had sought since leaving her childhood home in Sammamish for college and a career.

The pandemic that derailed those dinners and so much more left Rayan certain that she should do much more. Now she’s pushing anyone she can to register to vote and, in a first for her, volunteering with a campaign, a state legislative race.

The federal government’s response to the pandemic and economic collapse has, to Rayan’s eye, amounted to $1,200 checks and little else for those hit hardest by the twin disasters. But she says the upwelling of kindness and care sparked by the catastrophes has been inspiring.

“The community response to this has been amazing,” Rayan says. “No matter what the government does, it can’t destroy that positive community energy.”

By any measure, the 2020 political season does not want for energy, or consequence. Early ballot counts show a record number of Washington voters have already returned their ballots. After a summer shaped by the coronavirus and racial justice protests, voters are ready to weigh in on their elected leaders, President Donald Trump most of all. 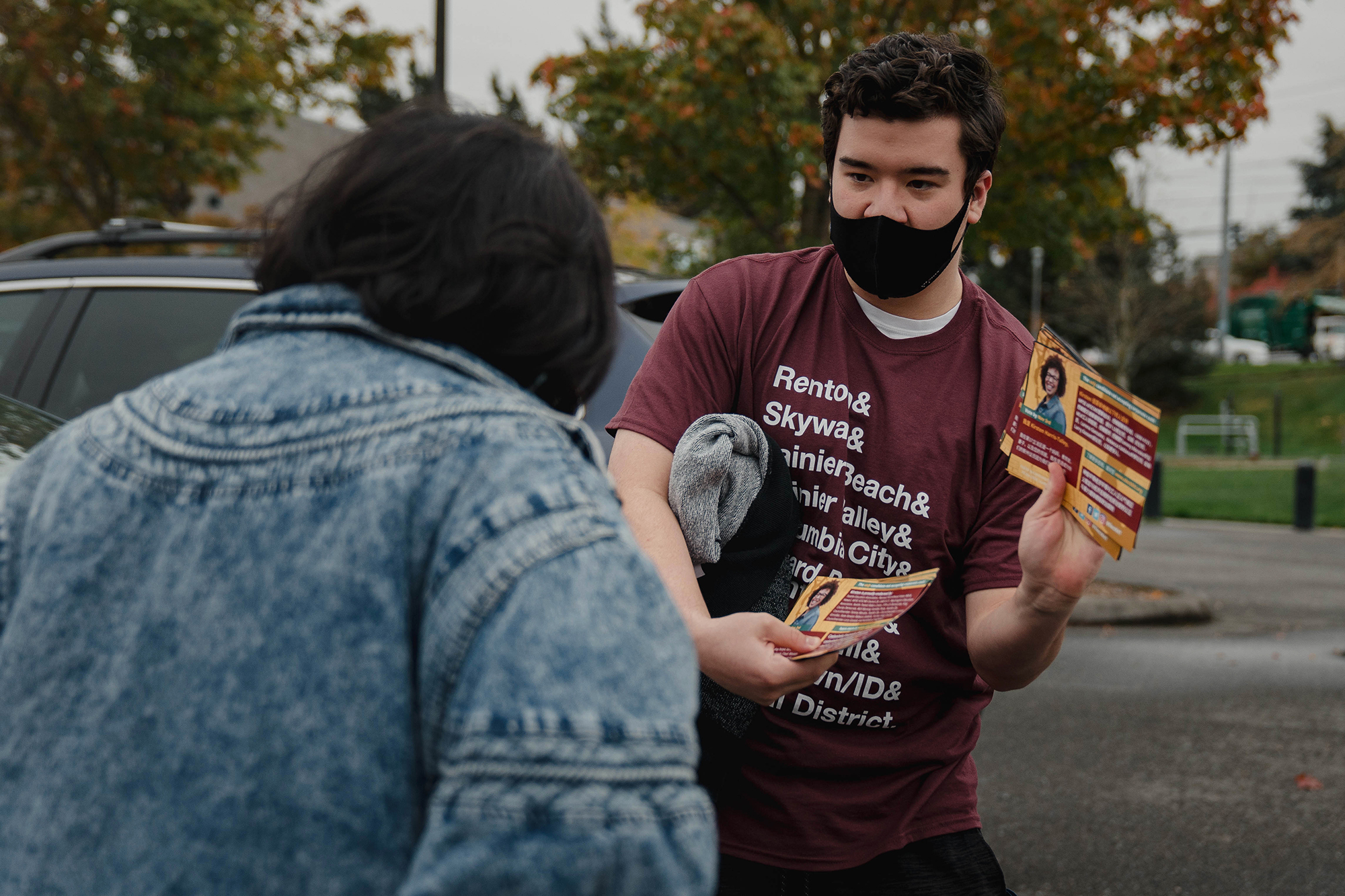 Even before the pandemic, Washington state’s political landscape was shifting, to the detriment of the Republican Party. Now some veteran pols are arguing that 2020 will signal a lasting political realignment.

Jim Sannes’ own political realignment began more than a decade ago at a gun rights rally in Olympia.

The self-described Navy brat and longtime Aberdeen resident, like most of his neighbors on the Washington coast, had always been a Democrat. Looking back, he can’t explain why. His parents were Democrats, so was he.

Sannes, now 59, says he found himself drawn to the “constitutionalist” stance put forward increasingly by the Republican Party. It was confusing at first, realizing that his politics didn’t match his party. Leaving was painful.

“I just believe in our right to live a free life,” Sannes says. “I’ve got quite a few friends on the Democratic side, and I’ve lost a few of them. And that hurt.”

A recovering cocaine addict, Sannes had been a vocal opponent of programs in his community like needle exchanges that, as he sees it, enable drug users to continue using. But he hadn’t considered joining a political campaign until meeting Loren Culp, the Republican challenger to Gov. Jay Inslee, during a Harley ride.

Sannes says he’s seen spitefulness in Inslee’s handling of the pandemic, a disdain for those who don’t share his politics. He believes mask mandates and shutdown orders, both opposed by Culp, are governmental overreach.

“As far as I’m concerned that’s against my constitutional rights,” Sannes opines. “It’s your right, whether you do or you don’t wear a mask.”

Sannes’s shift away from the Democratic Party is emblematic of a long-burning trend in Washington politics. Rural areas, including coastal communities once key to Democratic control of the Legislature, have been turning red while urban and suburban areas, like once solidly Republican Bellevue, have gone blue.

Rob McKenna knows from experience what those shifts amount to — Republican losses.

Running against Inslee in 2012 to replace Gov. Chris Gregoire, McKenna, a popular state attorney general, was one of the last Republicans to hold a top-tier statewide office in Washington. He lost to Inslee by 94,557 votes, a margin he attributes to lopsided support for Inslee in and around Seattle. Since McKenna’s run, Democrats have won races for governor, the U.S. Senate and state attorney general by at least 9 percentage points.

“I’m like most Washingtonians — I’m proud of the fact that I can name Democrats that I’ve voted for,” McKenna says. “People still come up to me and say, ‘You’re the only Republican I’ve ever voted for.’ It’s kind of a point of pride in our state.”

Republican gains in the few rural counties McKenna lost to Inslee don’t amount to much compared with Democratic gains in Seattle and its suburbs, which have larger populations and vote more consistently, McKenna says. He and others point out that Republicans no longer hold any King County legislative districts, a reality that makes it impossible for the GOP to hold power in Olympia.

The situation isn’t helped by Trump, who has turned off some “chamber of commerce Republicans.” McKenna says he’s not supporting his party’s candidate for president for the first time, a man McKenna describes as a “misogynist … never qualified for the job,” in part because of Trump’s botching of the pandemic response.

“There will always be people, including people reading this article, who will say, ‘You’re not really a Republican if you didn’t support Trump,’ ” McKenna says. “Well, my Republicanism isn’t defined by one person. I was a Republican before Trump, and I’ll be a Republican after Trump.”

In that, McKenna stands apart from his old Republican partner on the King County Council, Chris Vance.

Vance, the former state Republican Party chairman and 2016 challenger to U.S. Sen. Patty Murray, is Washington’s leading “Never Trumper.” His party, he says, has left him.

Active in the Lincoln Project and other bastions built by anti-Trump conservatives, Vance describes his former party as a “permanent protest movement” animated by isolationism abroad and nativism at home, and a desire to protect “white Christian” culture.

“The base of the Republican Party loves Donald Trump,” Vance says. “They love him and, most importantly, they agree with him.”

Because Vance cannot, he left the party he had worked with for 37 years.

Vance recalls a conversation with Slade Gorton, the last Republican to represent Washington in the U.S. Senate before narrowly losing to Cantwell in 2000. Gorton, Vance says, told him to weather the shift in political wind. Vance didn’t believe his party would be returning to what he calls “shining city conservatism” any time soon; all he’s seen since the pandemic began has reinforced that impression.

“You’re seeing the kind of national craziness, with QAnon and everything, seep into the Washington state Republican Party, the party of Dan Evans and Slade Gorton and Jennifer Dunn,” says Vance, listing centrist, “chamber of commerce Republicans” elected in decades past. “Now it’s the party of Loren Culp. … It’s madness.”

Gorton was Eric Earling’s kind of Republican — he worked at the senator’s Bellevue office for 3½ years. So was George W. Bush; Earling served in the Department of Education during President Bush’s second term.

Trump’s elevation had already pushed Earling out of the Republican Party, but wasn’t enough to make him a Democrat. Earling says it was the Trump administration’s mismanagement of the pandemic that took him “from opposing Trump to supporting Biden.”

“It’s one thing to disagree about the role of government in everyday life,” says Earling, speaking from his home in Boise, Idaho. “With a deadly global pandemic, you start to get to some much more fundamental issues about why the government exists, to protect life and property.”

“Do I expect to agree with everything Joe Biden does as president? No,” he continues. “Do I think the No. 1 issue of the day is the pandemic? Yeah, and I think Joe Biden is going to be way better at that than Donald Trump.”

For Ndidi Opara, the pandemic has been a lesson in America’s political division.

“The pandemic should not have been politicized in the first place, but it has been,” says Opara, a high school senior living in Seattle’s east suburbs. “It’s really highlighting this flawed sense of freedom and individualism” among Republicans.

Opara won’t be voting — she’s 17 — but has been increasingly involved with community organizations like the Kirkland Youth Council and Eastside Change Coalition, which aim to shape public policy. Calls for racial justice following the police killing of George Floyd in May animated her advocacy on issues like anti-Black economic discrimination more than the pandemic.

Though Opara says she sees most electoral politics as inherently “corrupt,” she decided to get involved this season. Like Rayan, she is volunteering for the campaign of Kirsten Harris-Talley, who is running against Chukundi Salisbury for an open state House seat in the 37th Legislative District, which includes Seattle’s Central District, Capitol Hill and much of the Rainier Valley. 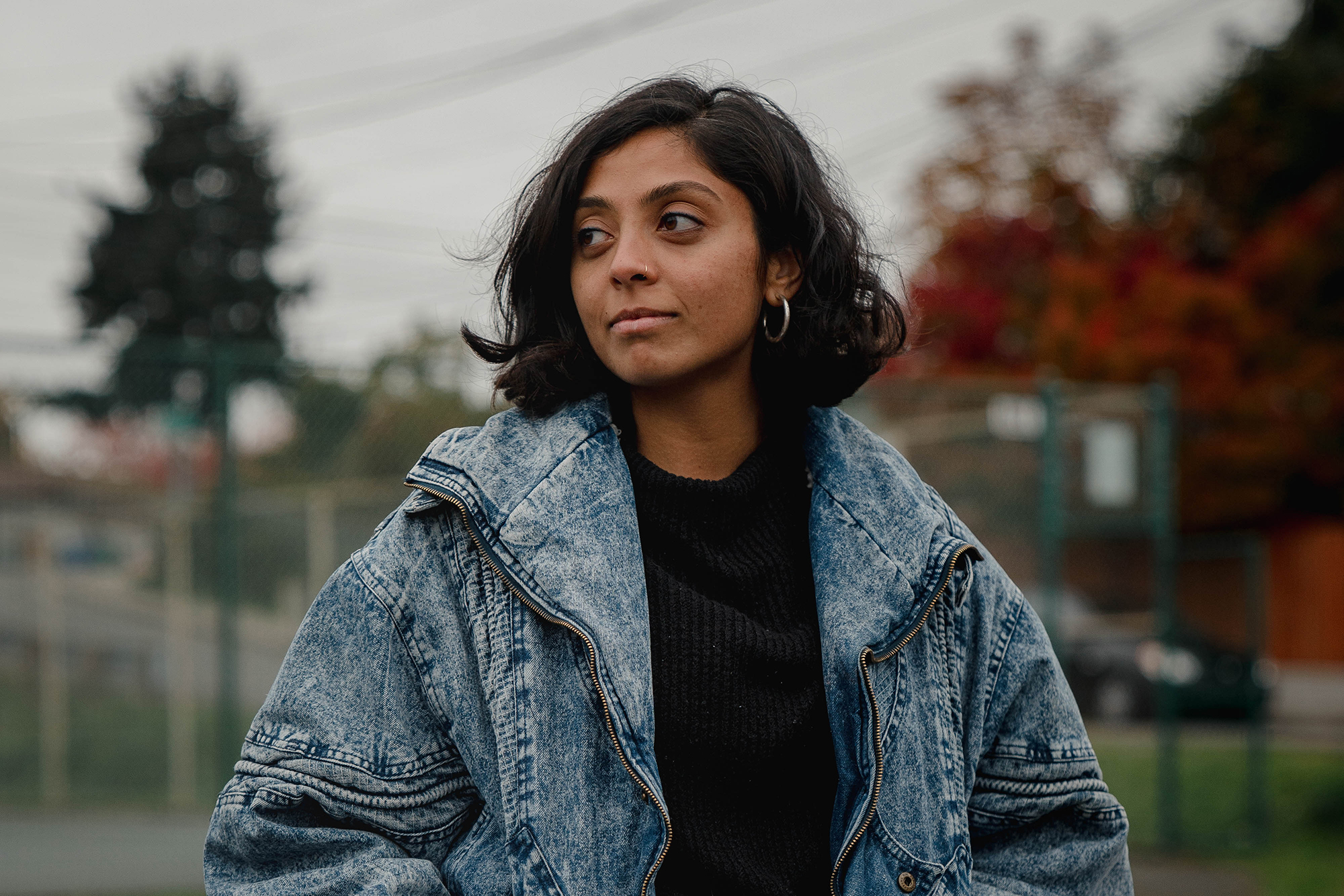 Kelley-Kamp, 36, was an on-again, off-again activist before Trump’s election in 2016. By the 2018 midterm elections, she was signing petitions and sending text messages encouraging voters in swing congressional districts as a member of Seattle Indivisible, the area chapter of a national progress movement.

Dismay over the coronavirus and fear about what a second Trump term would bring motivated Kelley-Kamp to make activism her focus as Election Day approaches.

“It is such an ego show right now,” Kelley-Kamp says. “It’s not fun to wear a mask. It’s not fun to socially distance. This sucks. … But to have someone who won’t do what other Americans are doing, it just really shows how out of touch [Trump] is.”

Kelley-Kamp says she’s come to realize that being a white, cisgendered North Seattle resident had insulated her from much of the pain that government action and inaction can bring to people. In recent weeks, she has spent hours corresponding with people elsewhere in the country who struggle just to vote. She’s trying to convince them that voting is worth their time.

Sannes of Aberdeen is also a big booster of voting. He’s proud that all five of his children are now registered to vote, and keeps a stack of voter registration forms in his home. He says he pushes them on anybody, whatever their politics.

Like most interviewed for this story, Sannes lamented political divisions that have become increasingly difficult to bridge. He describes being yelled at by another shopper at an Olympia Walmart upset that Sannes, as is his habit, had a holstered pistol on his hip.

“I can’t hardly have a conversation with a Democrat today because they’re so angry,” he says. “If they don’t agree with everything you stand for, then you’re just not a good person.”

As Election Day approaches, frustration is in ample supply all around. Rayan sees the lightly masked crowds cheering on the president and wonders why Americans are risking their lives, as she sees it, “standing for hate.”

“At first, I get angry because I’m like, ‘Do you guys not see what this is doing?’ ” Rayan says. “I’m angry, I’m confused. But then a big part of me views it as an expression of insecurity or self-hate.”

This fall, Rayan has spent her off hours doing basic political legwork. She has a car so she spends a lot of her time delivering signs to supporters. Seeing them populating yards and windows around her neighborhood, she says, lifts her spirits during a trying time.

“It’s cool to see that work paying off.”