Urban-suburban political divide is shrinking — at least in King County

The Crosscut/Elway Poll found the issue of policing and public safety is an important factor in regional voters’ choice for president this year. 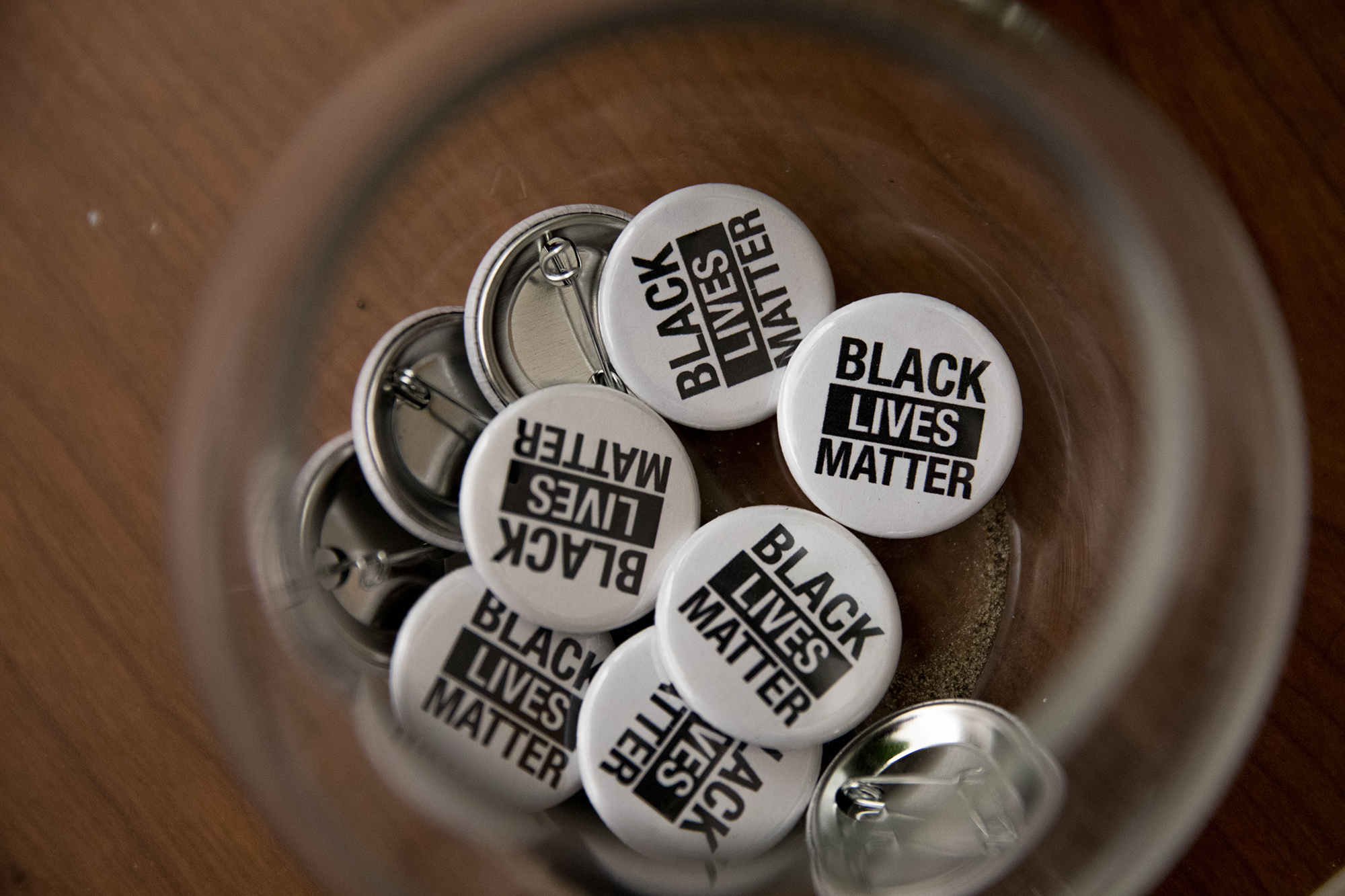 The term “division” has been one of the key words to describe today’s political climate, both nationally and locally. But a new Crosscut/Elway Poll focused on Seattle and King County found differences between urban and suburban communities seem to be shrinking, at least in this part of the country.

While registered voters living in King County, but outside of Seattle, were less likely to support the Black Lives Matter protests than their neighbors in Seattle, a majority of registered voters in both groups expressed support for the protests and the ideas behind them.

Similarly, more Seattle voters than voters in the surrounding county said they think the police have been using too much force with the protesters: 55% vs. 43%. The poll conducted Sept. 26 through Oct. 1 has a 7% margin of error at the 95% confidence level, which means that if the survey had been conducted 100 times, the results would be within 7 percentage points of the results reported here at least 95 times.

Voters throughout King County, including Seattle, largely agreed that policing and public safety will be one of several important factors they consider when voting for president this year. About one in five called this a very significant issue and about the same number said it wasn't much of a factor in their vote for president.

Their answer to a follow-up question on which presidential candidate best represents their thinking about policing and public safety shows just how much King County has moved toward Seattle in its political leanings. While 73% of Seattle voters said former Vice President Joe Biden syncs with their way of thinking on public safety, a majority of King County voters outside Seattle agreed, 55%. So this poll shows a political divide remains between Seattle and the rest of King County but that division is not as stark as it was two decades ago, when Bellevue, Redmond and surrounding areas were often represented by moderate Republicans. 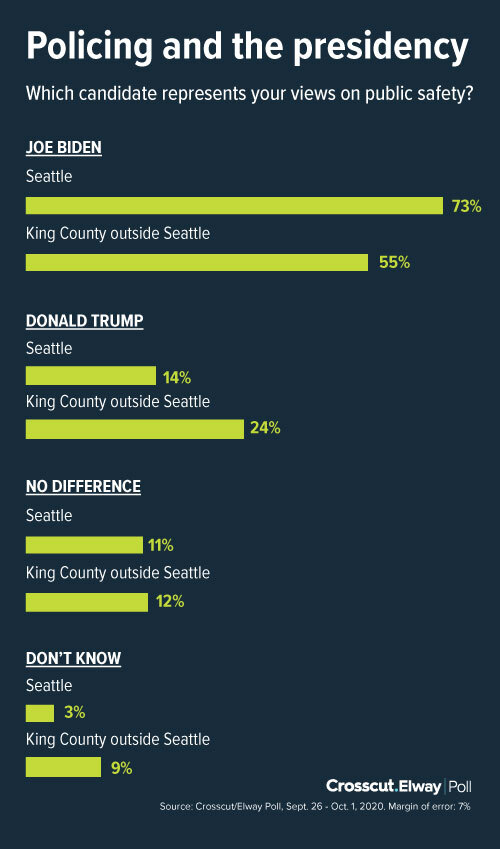 The registered voters polled in and outside Seattle agreed on a number of other issues in this poll. A majority said that outside groups aiming to cause trouble were responsible for most of the violence at the protests. And most people, across all demographic and geographic groups, believe police are more likely to use deadly force against a Black person than a white person. Yet there was also broad opposition to the idea of cutting police budgets dramatically or dismantling the police force and replacing it with a new system.

A closer examination of the poll numbers reveals divisions that are not driven by geography, but instead by differences in education level and age. For example, older adults are more likely than younger adults to believe their local police are doing a good or excellent job, whether they live in Seattle or in the surrounding suburbs. These comparisons are less reliable, though, because they rely on a smaller subset of the sample, which increases the margin of error.

Jana Huddleston, 61, of Woodinville, who was among the registered voters interviewed for the poll, said she thinks her local police are doing a good job. She supports the Black Lives Matter protests and thinks they have been mostly peaceful, but has not participated herself. She hesitated before saying so, but admitted she believes the biggest political divide in the greater Seattle area falls along the question of whether someone went to college or not. The poll showed much more support for the Black Lives Matter movement among people who went to college, as well as a stronger belief that systemic racism exists in policing.

Huddleston is a Democrat who plans to vote for Biden for president and Gov. Jay Inslee to be reelected, but she doesn’t feel strongly about whether the police are inherently racist and didn’t have an answer on whether Black people are more likely to experience police deadly force.

She describes her neighbors as similarly liberal, but says her family members in south King County are definitely more conservative. One thing she has in common with almost every American: Huddleston is worried about the election, but also says she is generally hopeful about the future.

In Kirkland, Margaret-Ann Warren, 74, has just the opposite impression of the protests and does not support the Black Lives Matter movement. She said she has not attended any of the protests and was somewhat surprised to hear there were gatherings east of Lake Washington in suburban King County.

“They were very distressing, very obviously very destructive,” Warren said of the protests that took place in Seattle. “It seems like all they wanted to do is loot.” She said she wouldn’t have a problem with peaceful protests

“People have a right to protest, but they don’t have a right to riot and loot and burn buildings,” said the lifelong Republican, who gets most of her news from Fox News.

Warren said she is supporting both President Donald Trump for reelection and Republic Police Chief Loren Culp for governor.

But in at least one important way, Warren and Huddleston agreed: The majority of people who live in the suburbs east of Seattle are liberal, will not be voting for Trump or Culp and generally support anti-racism protests. The poll agreed, with 55% from King County supporting Biden and 54% voting for Inslee. 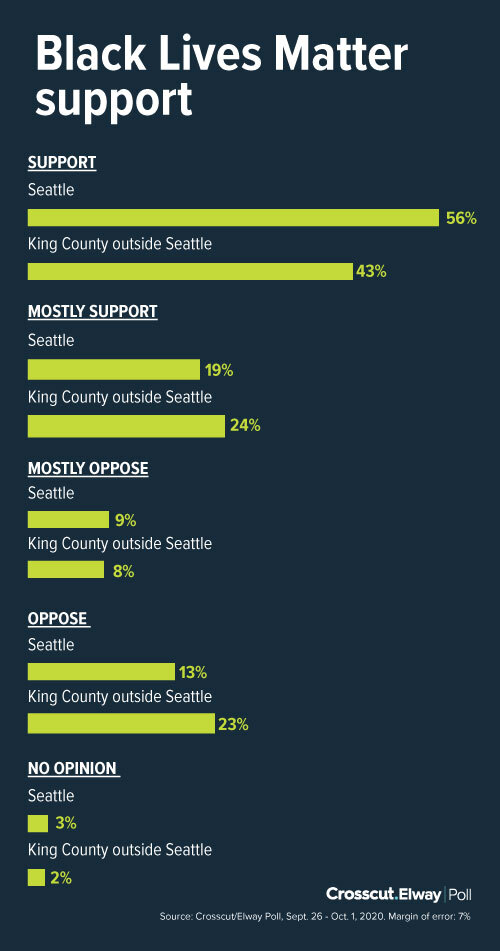 King County Councilmember Claudia Balducci agrees. Over the past decade, King County has changed from somewhat purple — a mix of Democrats and Republicans — to decidedly blue, especially in the suburban cities closer to Seattle.

The people of Bellevue, where Balducci lives, have clearly showed their support for their local police, she said, but the residents of this minority-majority city have also voiced their concerns about racism and held their own Black Lives Matter protests.

Protesters from Seattle demonstrated in the suburbs as well. When the so-called “Evening March” came to Balducci’s neighborhood in August, many of her neighbors came out to listen to what the visitors had to say and to hear how the council member responded.

“I was really surprised at how open and calm my neighbors were about this event,” Balducci said, noting that no one called the police or complained afterward. They were mostly curious and interested, she said.

Balducci noted that even the 8th Congressional District, which was redrawn in 2012 with the apparent goal of keeping the district in Republican hands, is now represented by a Democrat, Rep. Kim Schrier. The first-term congresswoman is facing a strong Republican challenger in Jesse Jensen, so the transformation of the eastern suburbs into a Democratic stronghold is not complete.

Balducci said the big influx of tech employment has pushed the eastern suburbs to the left, but no one really knows what the future holds, post-coronavirus and after the economic downturn.

“I am out of the business of prognosticating when and how this is going to end,” she said, referring to both the November election and coronavirus.

A person who is “in the business of prognosticating,” political science professor Vernon D. Johnson of Western Washington University said he’s seen many signs that Americans are waking up to the problem of racism in this country. But the director of the Ralph Munro Institute for Civic Education worries that the acts of violence and property damage at some protests could be influencing public opinion, especially in the suburbs.

“Multiple pressure points are good,” he said of the effectiveness of protest in changing public policy. “The minute it becomes violent, it changes the perceptions of most of us.”

Johnson believes the Black Lives Matter movement will likely make progress toward its goals through a process of negotiation and compromise, just as activists of the past have done. He acknowledged that the young people who fill his college courses do not agree with that point of view.

“Half or more of the Black community is not for any kind of dramatic change,” Johnson said, referring to some recent national polls. Just as this Crosscut/Elway Poll showed for Seattle and King County, most Americans do not favor defunding the police or even cutting police budgets in half.

Johnson, who is Black, adds that the movement still has plenty of work to do among white Americans. Only 30% of white people say they have taken any action to better understand racial issues in America since the killing of George Floyd in May, according to an NPR/Ipsos poll conducted in August. The poll said about half of Asian and Hispanic Americans have made an effort.

“Most white people still aren’t doing anything except being sympathetic,” Johnson said. “People of color would say, ‘You’ve got to show up.’ "

White people in the poll expressed equal support for the protests with people of color and were actually more likely to say systemic racism was to blame for police violence against Black people. More white voters also told the Crosscut/Elway Poll that they felt police used too much force against protesters.