A collective of campaign workers across the state says its members are tired of working long hours with no job security or health care. 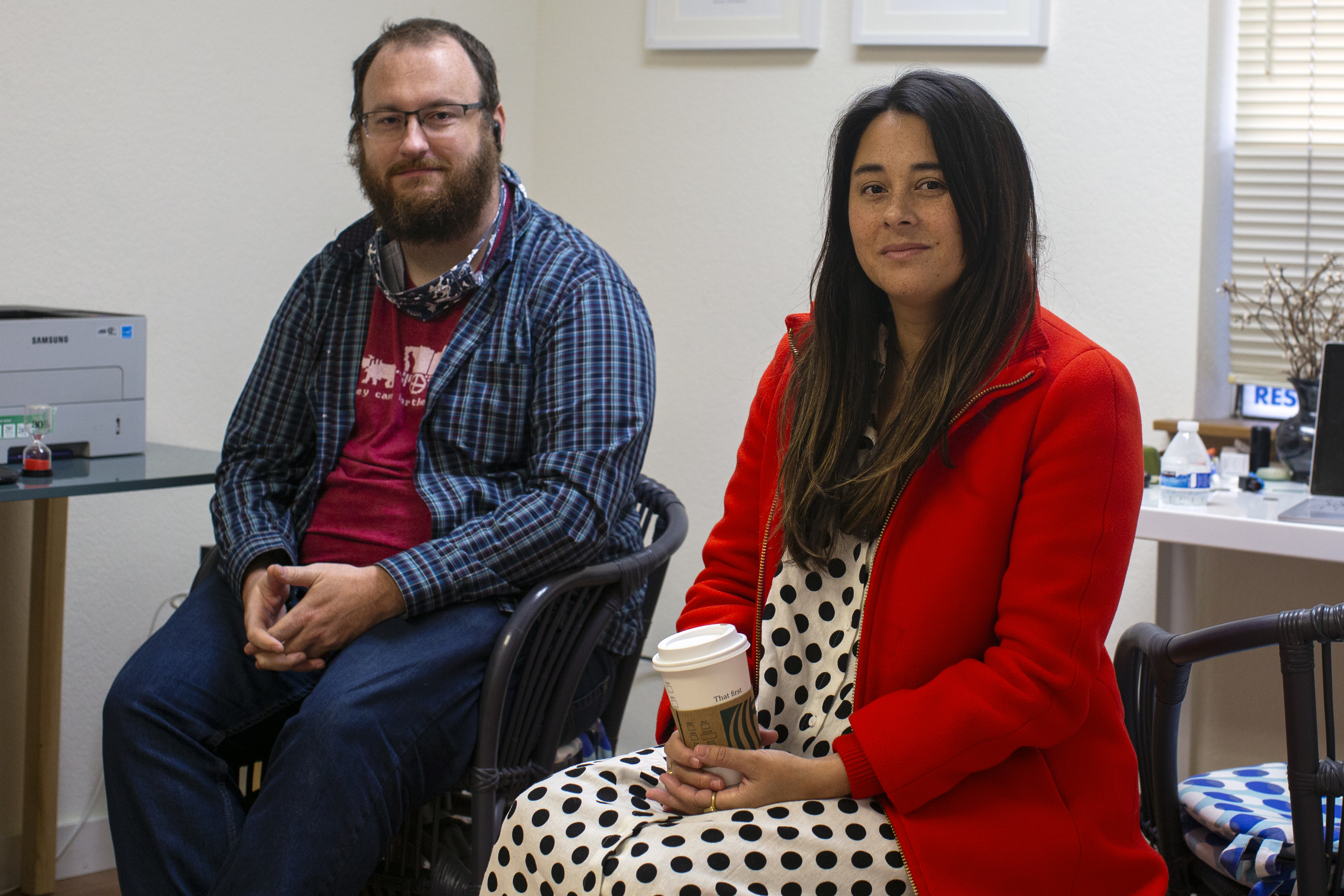 Erin Phillips, right, and Jeff Beaulac are part of a group of campaign workers that has raised concerns about lack of health care, long working hours and other working conditions for campaign employees across Washington state. (Shaminder Dulai/Crosscut)

Eighty-hour weeks, low pay, poor job security, fast-food diets — these are some of the working conditions campaign staffers have come to expect during election season.

A group called the Washington Campaign Workers Collective, which consists of more than 40 workers from different political campaigns around Washington state, delivered a list of demands Monday to several of the state’s major Democratic groups. The requests include: guaranteed health care coverage, a minimum salary of $30 per hour for campaign managers, guaranteed days off and no-contact hours between 9 p.m. and 8 a.m.

In their letter, members of the collective cited a “system of extractive, low-paid, high pressure campaign work” that goes beyond any one particular campaign.

According to the letter, that system ends up excluding many people from political work — especially those from marginalized groups, such as LGBTQ workers, workers who are disabled and those who identify as Black, Indigenous, and people of color.

“This year, we have seen there is a deep need to change the way in which our society operates,” the letter from the campaign workers reads. “... But nothing will fundamentally change in our state unless our politics changes too.”

The campaign workers are asking all Democratic-affiliated campaigns in Washington state to agree to abide by the proposed bill of rights in the future. If campaigns don’t do so, the collective is asking that state and local Democratic Party organizations withhold endorsements of candidates or withdraw endorsements already made.

Tina Podlodowski, who chairs the Washington State Democrats, didn’t indicate Monday exactly how the party would respond to the campaign workers’ list of demands.

She said she and other party leaders believe strongly in worker rights, which is part of why workers employed directly by the state party already receive union benefits and salaries.

“I am very interested in making sure this entire profession is one that pays people well and that has full benefits, so people can make a career here,” Podlodowski said Monday.

But campaign workers say those standards aren’t trickling down to the many other Democratic campaigns in the state, including the ones working to elect candidates to the 147 seats in Washington’s Legislature. 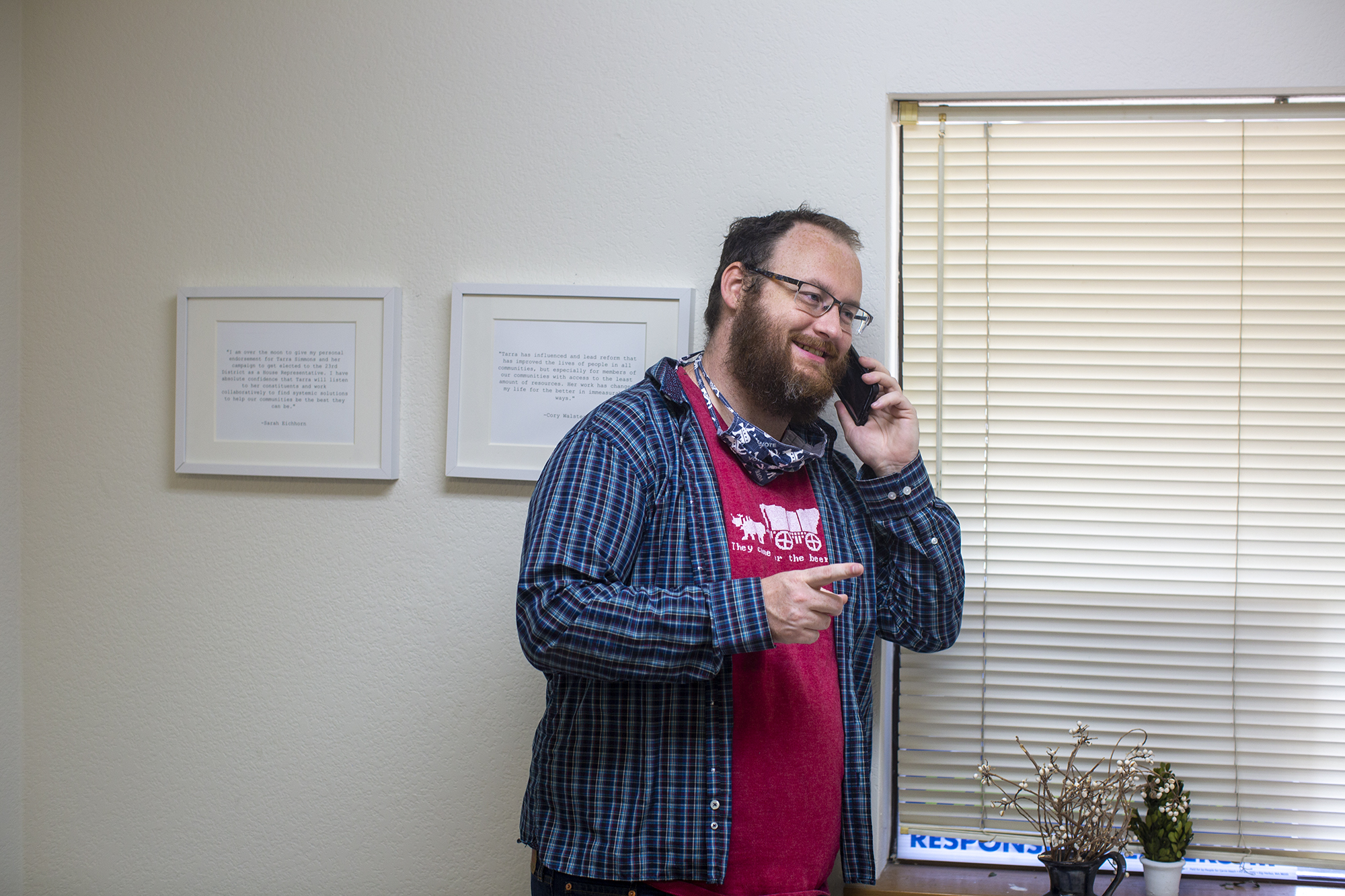 Jeff Beaulac is a campaign manager for a first-time candidate who is running on issues he supports. He says that made the hardship of relocating for a temporary campaign job more palatable for him. (Shaminder Dulai/Crosscut)

Jeff Beaulac is a campaign manager for a first-time candidate who is running on issues he supports. He says that made the hardship of relocating for a temporary campaign job more palatable for him. (Shaminder Dulai/Crosscut)

Jeff Beaulac, a campaign manager who is part of the collective, said his work on campaigns has often involved starting around 7 or 8 a.m. and working until 11 p.m. or midnight — without any days off during the week. He said the grueling schedule and limited benefits nearly led him to leave the industry after 2018.

“There are very few people who are able to do this multiple times,” said Beaulac, 35.

While the collective is not a formal labor union, it is in line with the recent trend of educated, white collar workers organizing to try to improve their working conditions, said Ruth Milkman, a labor sociologist on the faculty of City University of New York.

Increasingly, political campaign workers have unionized across the country, Milkman noted. She said she hasn’t seen an attempt by multiple political campaigns to form a collective over an entire state or region, but considers it part of the same general phenomenon.

“These jobs are completely insecure — you don’t know if you are going to have a job next week,” Milkman said. “... That precarity contributes to the push to unionize workers like political workers.”

While Phillips said she makes more than that, calling her current campaign “awesome,” she characterized her experience as an exception to the rule. She said the campaign she currently works for also gives her a health care stipend, but that isn’t standard across the industry.

“There is so much turnover and burnout in this industry,” Phillips said. “People care so much about the work and are willing to sacrifice their well-being, but it’s not sustainable.” 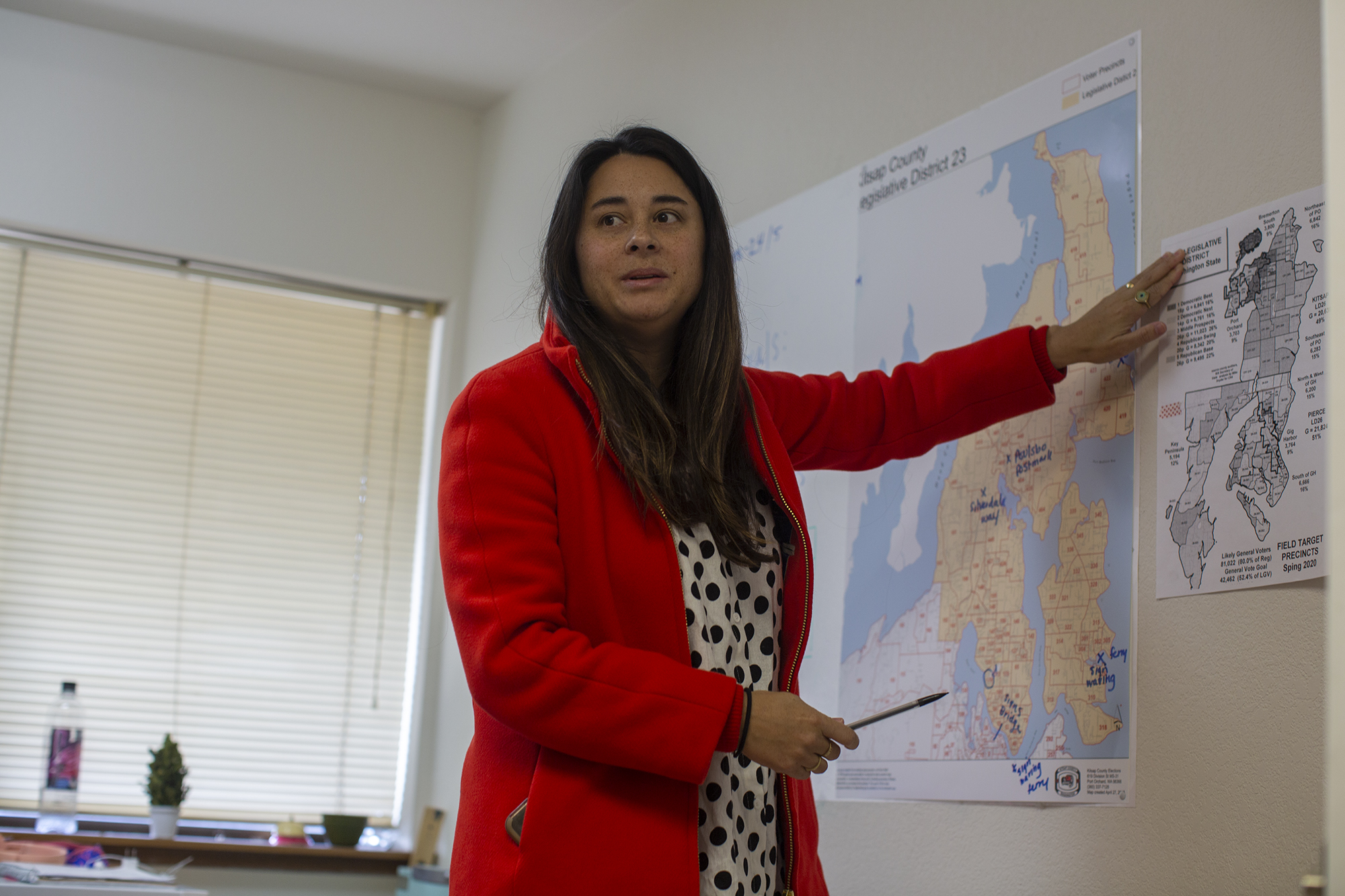 Erin Phillips is a campaign manager for a state legislative candidate. She said her current campaign gives her a health care stipend, but that's not the standard for the industry. (Shaminder Dulai/Crosscut)

Erin Phillips is a campaign manager for a state legislative candidate. She said her current campaign gives her a health care stipend, but that's not the standard for the industry. (Shaminder Dulai/Crosscut)

The work also is unreliable, with jobs typically drying up after election results are finalized, campaign workers say.

To address that, the collective’s demands include a request for campaign workers to get up to eight weeks of transitional pay after the election, so they have time to find a new job once their current campaign gig ends.

“We are really supposed to be totally diving in until Nov. 3, and then after Nov. 3, that is when we can start applying and looking for new work,” Beaulac said. “... The idea that someone in this economy is going to be able to find work in two to four weeks, that’s absurd.”

What’s more, campaign managers often have to take a pay cut to get work in odd-numbered years, when seats in the state Legislature and Congress generally aren’t up for election, said Nicholai Rosoff, another member of the collective.

Rosoff said in his experience, campaign managers typically work 80-hour weeks for an annual salary of $40,000 to $60,000, but don’t even end up getting that much money because their jobs don’t last a full year.

Another former campaign manager said they worked on a campaign this year where they would wake up at 7 a.m. and already have several texts and emails waiting for them from a candidate, after being on the phone with them until 10 or 11 p.m. at night. 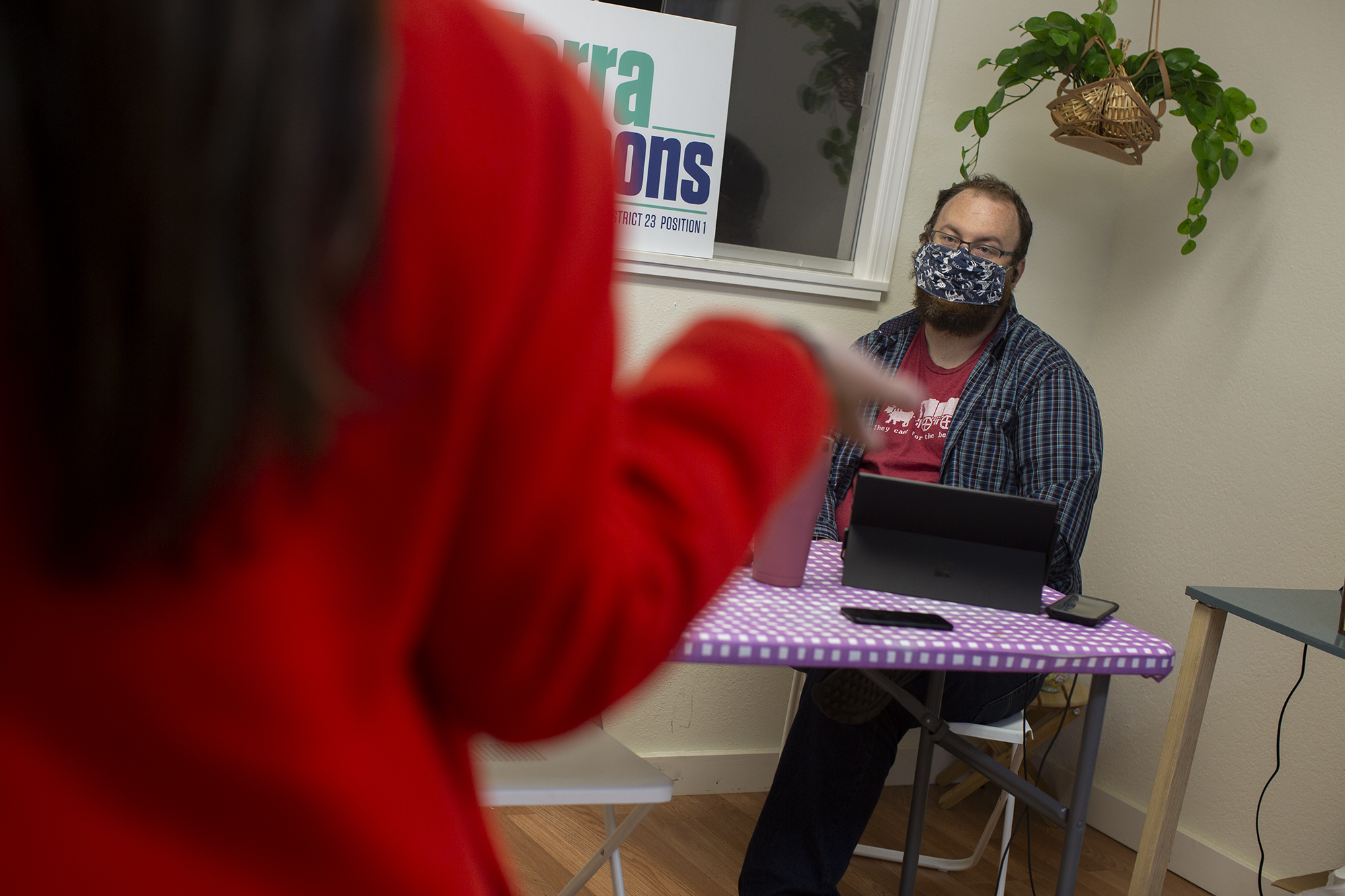 Beaulac, right, goes over plans for voter outreach with Phillips, at a shared campaign office in Bremerton, October 25, 2020. The two, who work on different campaigns, share an office and share news, tips and advice. (Shaminder Dulai/Crosscut)

Beaulac, right, goes over plans for voter outreach with Phillips, at a shared campaign office in Bremerton, October 25, 2020. The two, who work on different campaigns, share an office and share news, tips and advice. (Shaminder Dulai/Crosscut)

State Sen. Jamie Pedersen, D-Seattle, said the House and Senate campaign committees already have adopted codes of conduct for candidates. But there isn’t much they can do to enforce them, because the committees don’t actually control individual candidates’ campaigns, he wrote in a text message.

“We can only try to persuade,” said Pedersen, who chairs the Washington Senate Democratic Campaign.

Podlodowski said she would be happy for the state Democratic Party’s unionized workers to meet with members of the collective after the election and talk to them about options for unionizing their individual campaigns. Pedersen said his committee would also be glad to offer additional support to workers.

But members of the collective said they had already looked into unionizing and it wasn’t a viable option, since workers are spread across so many campaigns and change jobs frequently. Some campaigns also have only one full-time employee, making it difficult to unionize.

Giovanna Orecchio, one of the members of the Washington Campaign Workers' Collective, wrote in an email that the collective is modeled more like a workers center — a community organization that supports workers, but isn’t a formal union.

“We decided to organize ourselves and start acting like a union before we had one and take our Bill of Rights to those who run the industry: the Democratic Party leadership,” Orecchio wrote.

The group still hopes that it can unionize in a more formal manner sometime in the future, she wrote.

Correction: Washington’s Legislature has 147 seats. A previous version of this article said it had 148.