WA voters to decide whether to mandate sex ed in schools

Parents, advocates, candidates and religious groups debate what students should be taught about sex in WA public schools. 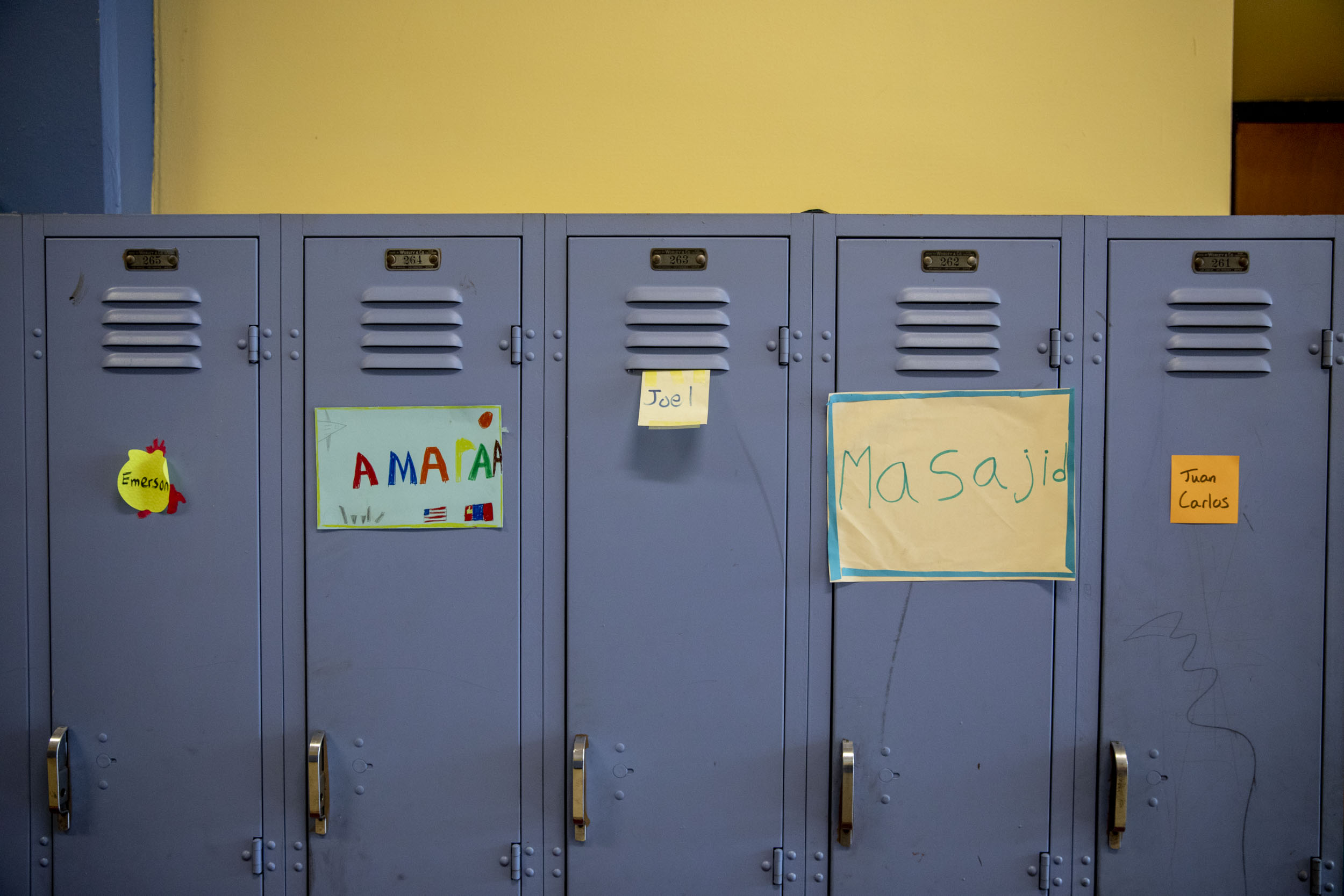 A row of student lockers at Northgate Elementary School on Jan. 31, 2018. (Dorothy Edwards/Crosscut)

When voters mark their ballot to approve or disapprove of Referendum 90 in the Nov. 3 general election, they may contemplate themes of state versus local control in public education, religious freedom, equity and what constitutes comprehensive sex education.

Opposition quickly developed after SB 5395 was passed and signed by Gov. Jay Inslee in March. Parents for Safe Schools led the charge and amid the pandemic gathered 264,000 signatures, enough to put the decision in the hands of Washington voters. The group has raised more than $267,000 to promote its campaign, with the largest contributions coming from the Reagan Fund, which works to elect Republicans to the state House. The referendum has become a key issue in the Office of Superintendent of Public Instruction race between incumbent Chris Reykdal and Maia Espinoza, who is the executive director of the Center for Latino Leadership.

Safe & Healthy Youth Washington has raised more than $1 million in support of R-90, with the largest contributions coming from Planned Parenthood Votes, the Washington Education Association and the American Civil Liberties Union.

Superintendent of Public Instruction Chris Reykdal, who supports SB 5395, was not surprised Parents for Safe Schools was able to gather so many signatures, even during a pandemic.

“This is emotional for some people,” he said, acknowledging that there are two world philosophies at play. “If you take a scientific approach and medical approach, then this makes sense. If you take a religious approach …. then you have a deeply personal thing and it feels like something that you don’t want your kids to experience in school. And I really respect that.”

For Reykdal, SB 5395 responds to a public health crisis.

“One in six boys and one in three girls have been a victim of sexual abuse, sexual assault or unwanted touch in Washington,” he said. And it doesn’t end with primary school. Twenty-five percent of college students in Washington have faced some sort of sexual assault, according to Zackary Turner, executive director of the Washington Student Association. Sexually transmitted diseases are also on the rise among youth 15 to19. A 2019 report to the Legislature from the OSPI and the Washington Department of Health found that rates of chlamydia have increased by 23% and syphilis by 120% over the previous five years.

“Until now, in Washington state, the only sexual health education that is required for every school to offer is on HIV/AIDS prevention and the effectiveness of condoms,” explained Courtney Normand, Washington state director of Planned Parenthood Votes Northwest and Hawaii and campaign co-manager of Safe & Healthy Youth Washington. Previous state guidelines for sexual health education in public schools were established under the 2007 Healthy Youth Act, which was an “if/then law.”

If school districts choose to provide sexual health education, then they must meet the standards of being age-appropriate, medically accurate and contain education about abstinence, birth control and sexually transmitted diseases. School districts can develop their own curriculum based on these guidelines or use OSPI-approved curriculums.

What’s new with SB 5395 is mandatory sexual health education at least once in four grade bands between kindergarten and 12th grade. Normand explained that this approach is based on research that shows the need for foundational building blocks in early grades emphasizing social emotional learning. The lessons progress through to middle school education around puberty, and on to topics of healthy relationships and pregnancy prevention in high school. State guidelines have also been expanded to include education on consent, bystander training and LGBTQ issues.

The goal is for greater equity so that no student will be left in the dark because their school district decided not to offfer any or very limited sex education. Currently, 93% of Washington school districts provide sex education in at least one grade band, according to OSPI.

Reykdal does not view the proposed new approach as a drastic change. “We’re not hearing from districts that this is a big burden at all,” he said. And the time commitment is minimal: “It’s as little as six lesson plans over 13 years,” he added.

The proposed law also includes stronger language around the opt-out clause. Reykdal said parents can opt out in any grade, they are not required to review the curriculum, they don’t owe school districts an explanation and districts must honor their request.

For Mario Villaneuva, the executive director of Washington State Catholic Conference, the opt out provision is not enough. “Parents can opt out of the class but not out of the school ... kids talk on the playground,” Villaneuva said

The Catholic Conference’s opposition to R-90 is based on a belief that education around sexual activity should come from parents and emphasize marriage. Villaneuava objects to the bill’s definitions around affirmative consent: “There’s this notion of how to say yes and how to say no.… We’re supportive of health education … but when you get into sensitive matters of sexual activity and health, we feel that’s a matter for family education.”

Kelle Brown, the lead pastor at Plymouth Church in Seattle, which is associated with the United Church of Christ, countered: “The church has been completely irresponsible in my opinion.…W’ve got to turn this thing around.”

Brown believes it’s appropriate to teach consent, given the frequency of sexual assault and that many youth turn to the internet for information. “We have to admit that we haven’t been having these conversations at home,” Brown said.

Vanessa Corwin, prevention services coordinator at the King County Sexual Assault Resource Center, pointed out that many parents lack the tools and time to have conversations about consent. “One of the No. 1 needs that I get from school administrators is that our parents need information, how do I get it to them?” she said. One student she worked with even asked for information to take home.

Sharon Hanek, the founder and director of My Family My Choice, which supports Parents for Safe Schools, argued that “the way 5395 is written, it will not honor different cultures and values.” Referencing her own Asian background and other immigrant communities, and pointing out that Eastern Washington is different from Seattle, she asserted that while she’s not opposed to the state requiring sex ed, she would prefer greater input by local communities.

Although school districts can develop their own curriculum, under the proposed law they still must meet the new standards, which Hanek fears stray from modesty and innocence. Concerned about SB 5395’s focus on consent skills rather than refusal skills, she asked, “Is it the state that should decide what comprehensive sex ed is or school districts?”

When asked about the need for education focused on sexual assault prevention, Hanek said schools already teach it under Erin’s Law, which was passed by the state Legislature in 2018. However, Normand of Planned Parenthood noted that Erin’s Law is not mandated as SB 5395 would be. Schools make a choice about whether to provide it.

Reykdal wants to be clear that parents were involved in the legislative process for the proposed law. In fact, the Legislature first took up this issue in 2019, only to delay moving forward until 2020 so that adjustments could be made. “They actually changed it substantially based on parent feedback,” he said.

Carmen Green, board president of the Mead School District, outside of Spokane, disagreed. Although the board has not taken a position on R-90, she feels that the new standards in SB 5395 lacked sufficient public input. She worries that sex ed, has been treated differently than any other subject that we teach, referring to the requirement that sexual health curriculum must be reported to a legislative committee. She feels the process usurps local control. When asked about reporting, the OSPI responded that it submits approximately 20 reports to the Legislature each year on a variety of subjects.

Green is not opposed to mandated sex ed or information about consent. “I love the bystander training. There are some pieces in the new curriculum that I totally support,” she said. However, she has had to address reactions from parents to a lesson plan posted on the OSPI website that they thought was explicit. “There were things in there that were not age appropriate.… It’s going to cause a response from a reasonable person to say this is not OK,” she said.

Maia Espinoza, who is running against Reykdal for superintendent of public instruction, referenced the lesson plan in her campaign materials, further fueling opposition to SB 5395. Her campaign did not respond to questions about those campaign materials or her opposition to the new sex education law. Voters should note that a "no" vote on R-90 rejects SB 5395, the bill passed by the Legislature to expand sex education.

The lesson plan in question was a handout created for parents and caregivers of fourth graders.  It provides a list of resources, including a book by Robie H. Harris called It’s Perfectly Normal: Changing Bodies, Growing Up, Sex and Sexual Health.The book contains watercolor images of sexual positions. Children would only see these images if their parents used the book when talking to their kids about sexual health.

Nikki Lockwood, a member of the Spokane Public Schools Board of Directors, said that when her district approved a new ninth grade sex ed curriculum a few years earlier, the response was much better than they expected.Teachers said they had the best conversations they’ve had with their students, Lockwood said. She appreciates the inclusion of LGBTQ information in the new standards.

Her own daughter is autistic, and she feels that when kids have more information, it helps with acceptance. “Public schools can reach so many kids, so it’s so impactful to have it at this level,” she said, but added that she agreed that parents should be the first educators while echoing the sentiment that not all families are the same. “It’s inequitable to think that families will take care of this,” she said.

Normand contended that “the irony of the [Reject R-90] campaign and the issue itself is the fear of factual information.” She clarified that affirmative consent does not teach kids how to have sex or to say yes to sex. It teaches, she said, “that both parties must express that they are willing to have that encounter…. What we’re doing is building up their skills to understand what yes even means.”

She urged people to consider decades of research showing that with comprehensive sex education, students wait longer to have sex, examine the risks, exercise informed decision making, use contraception and lower STD rates.

The Washington Student Association’s Turner said that if parents review the curriculum, “they will find out that it’s not scary.”