Voters dropping off their ballots on Election Day in Seattle, Bellevue and Yakima expressed some light hope, but mostly anxiety. 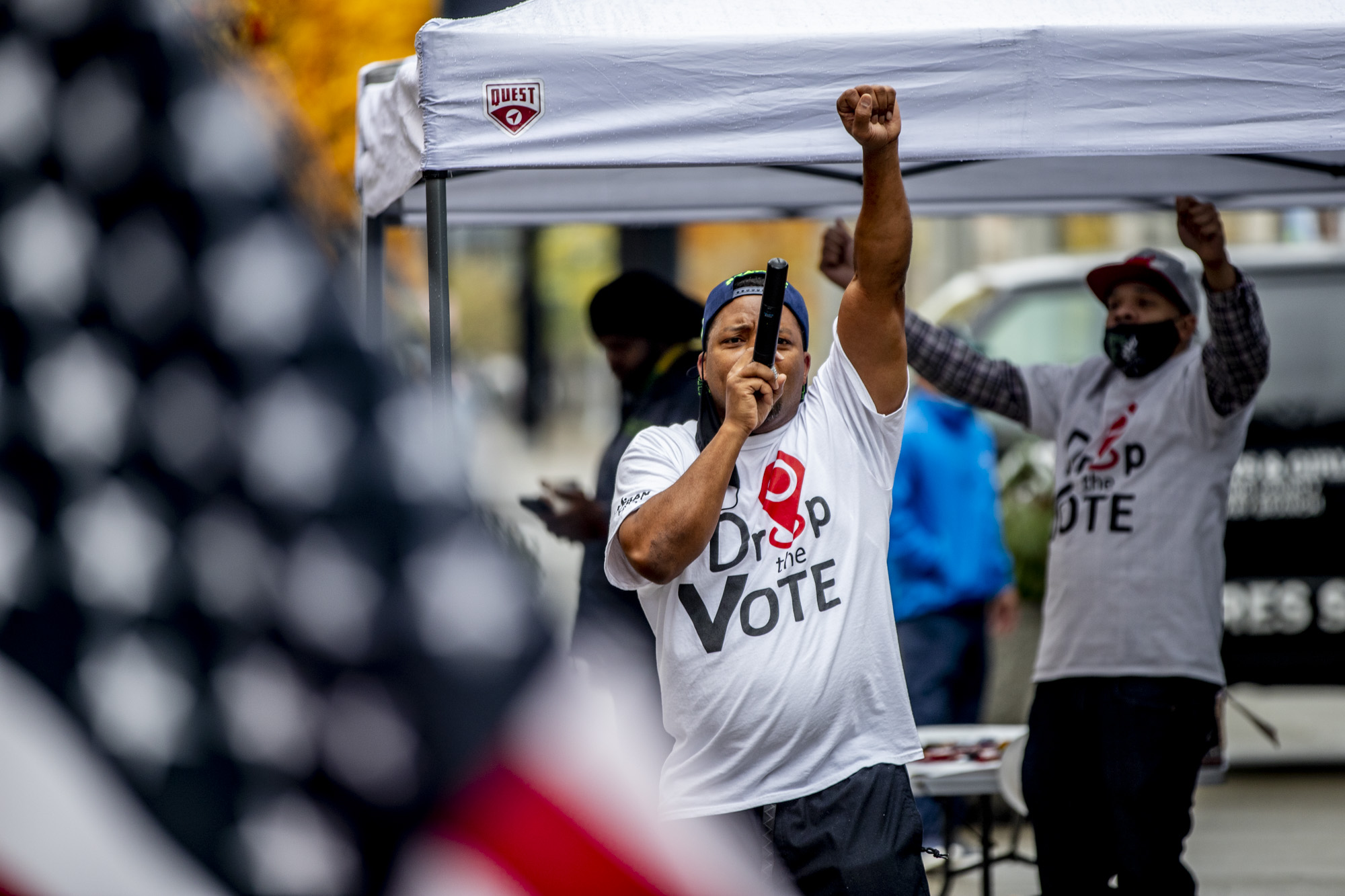 A group from Drop the Vote cheers on voters outside the CenturyLink Field Event Center on Nov. 3, 2020. (Dorothy Edwards/Crosscut)

On the final day to vote, in a state that’s unlikely to tip the balance toward either Joe Biden or Donald Trump, there was at least one unifying emotion among Washington’s last-minute voters: anxiety.

The year 2020 is not 2016, but the election four years ago loomed on Tuesday, especially among the majority Biden supporters dropping off their ballots at local ballot boxes.

“In 2016, I was confident Hillary [Clinton] would win,” said Callie Carlson, who recently moved to Seattle to run a leadership development program. “Now the polls favor Biden more and I’m less confident.”

An Election Day downpour might worry the turnout modelers in many places across the country. But in Seattle and other Puget Sound cities, the buckets of water dumping from the sky on Tuesday were unlikely to deter those few procrastinating voters who only needed to dash to their nearest drop box in a state that votes almost entirely by mail. 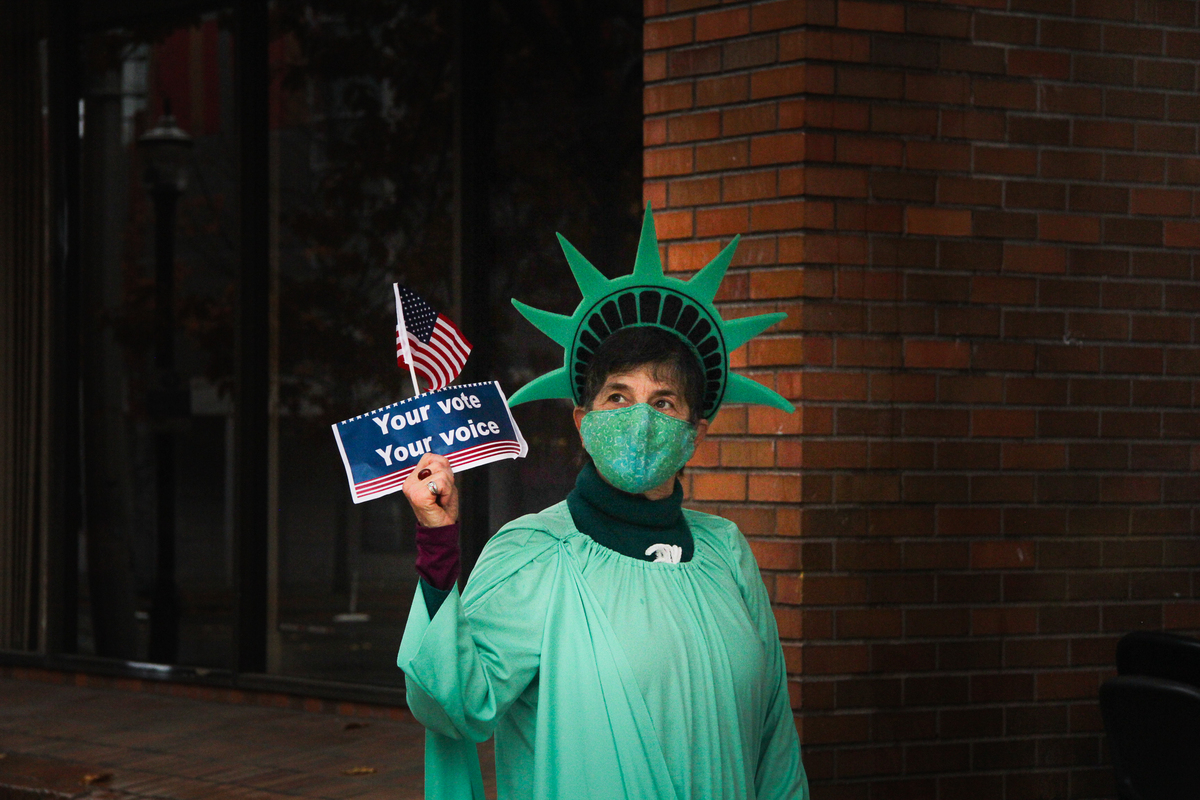 In King County, the appetite for voting has been even more ravenous, with turnout already nearing 80% — and exceeding it in Seattle. County elections officials estimate they’ll publish the results from about 1 million ballots at 8 p.m. Tuesday — besting 2016’s election-night results by nearly 400,000. The high-water mark for overall turnout in King County was 85% in 2012; this year, local officials are wagering they can hit 90%.

Despite the large early turnout, county poll workers at various ballot boxes across Seattle noted the steady stream of people dropping off their envelopes on the final day. For some, like Biden voter Robert Snell, the late vote was simply a matter of procrastination. But for others, there was more to it. 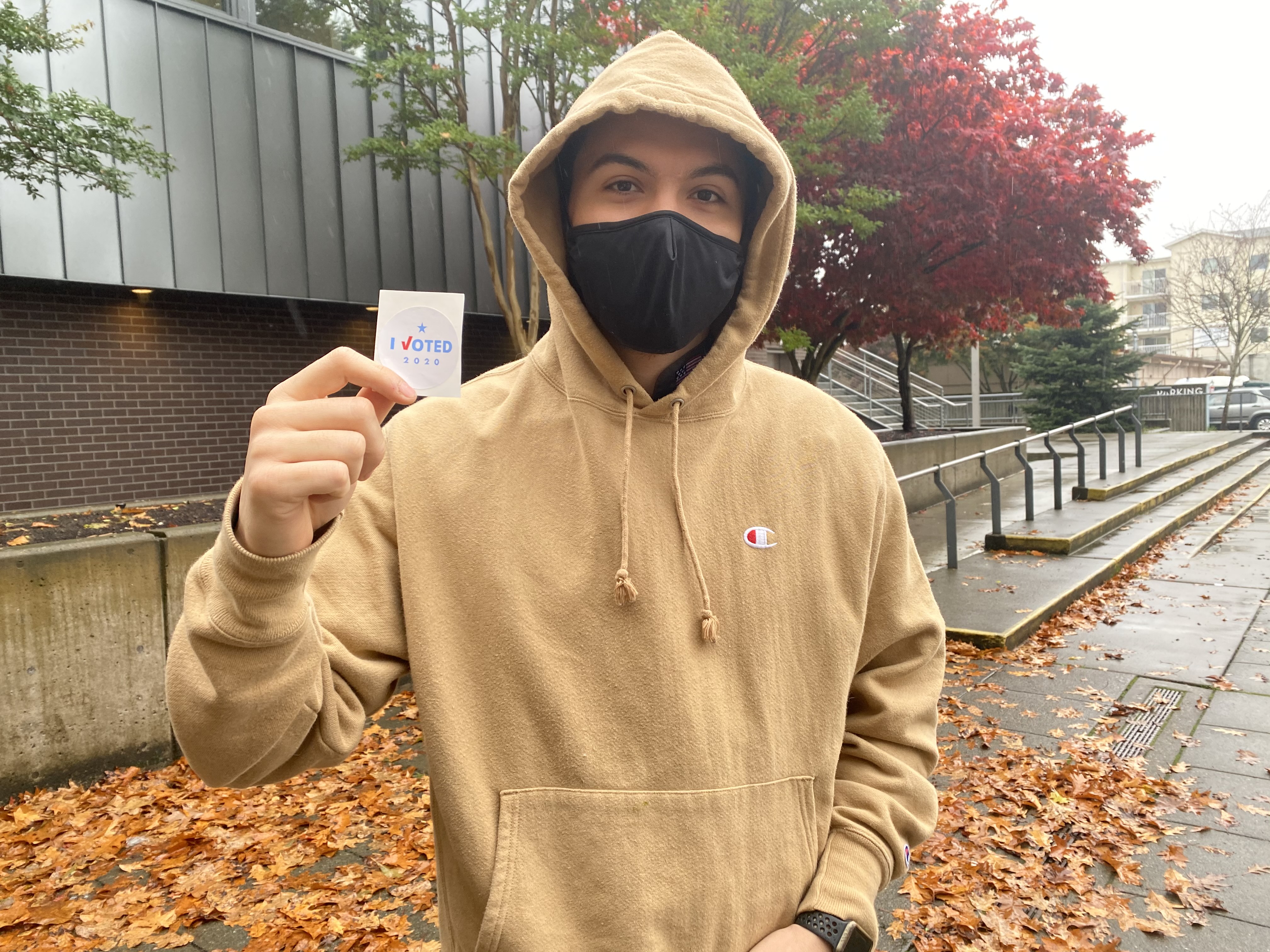 First-time voter Alex Hernandez holds up the "I voted" sticker he received when he dropped off his ballot at the box outside the Lake City library. (Melissa Santos/Crosscut)

First-time voter Alex Hernandez holds up the "I voted" sticker he received when he dropped off his ballot at the box outside the Lake City library. (Melissa Santos/Crosscut)

Esperanza Martinez lives in a house with seven others, but she’s the only one eligible to vote. In every election, she waits until the last day, sits around the table with her family and asks them what they think about the issues, she said. Her choices on the ballot are grounded in their collective opinions. “When I vote, it’s like seven other people vote,” she said. She chose Biden.

Sharron Anderson knew she was voting for Biden early on, but waited because she wanted to better understand the other items on her ballot. As a mother and the owner of Drae’s Lake Route Eatery, a restaurant in Rainier Beach, she said she’s more motivated to understand the implications of local ballot measures than she used to be.

For others, voting this year was a particularly powerful moment.

Alex Hernandez has never voted in an election before. When the 20-year-old dropped off his ballot at the box outside the Lake City library, he said he thought it was important to use the power he has — his vote — to help steer the country in a new direction. 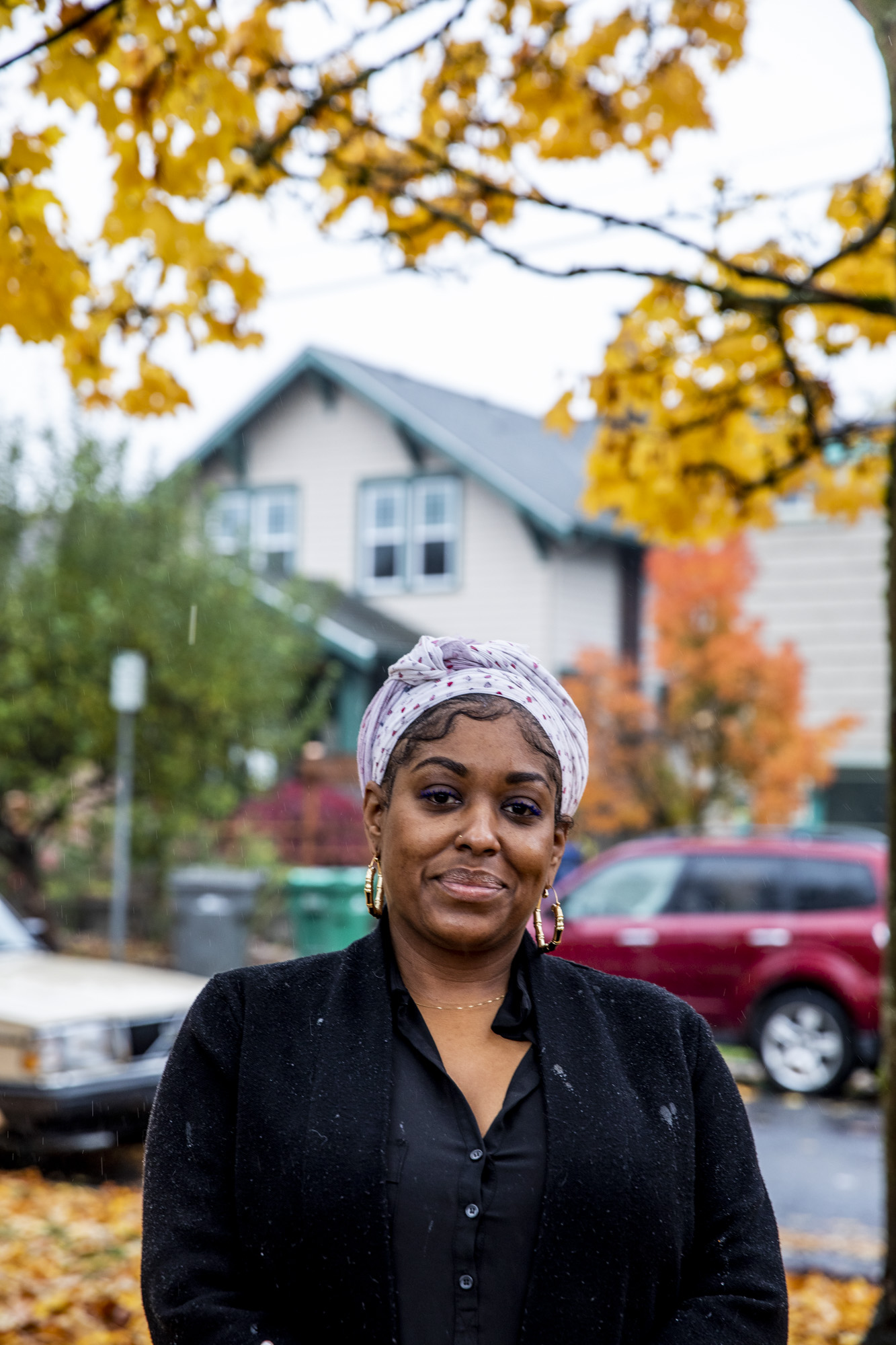 Sharron Anderson after she dropped off her ballot in Beacon Hill on Nov. 3, 2020. (Dorothy Edwards/Crosscut)

Sharron Anderson after she dropped off her ballot in Beacon Hill on Nov. 3, 2020. (Dorothy Edwards/Crosscut)

“As soon as Trump came into our house, it showed how much power we really have in shaping our future,” Hernandez said. “It’s a big deal.”

He voted for Biden for president and Democrat Jay Inslee for governor.

He said he thinks it is particularly important for people who are eligible to vote to use their voice at the ballot box, since not everyone has that ability. His parents, for instance, cannot vote, because they immigrated from Mexico and aren’t citizens.

“My parents don’t have the privilege to vote, but I do,” he said.

Despite the rain, some locations tried to make the short-lived experience of dropping off a ballot more entertaining. 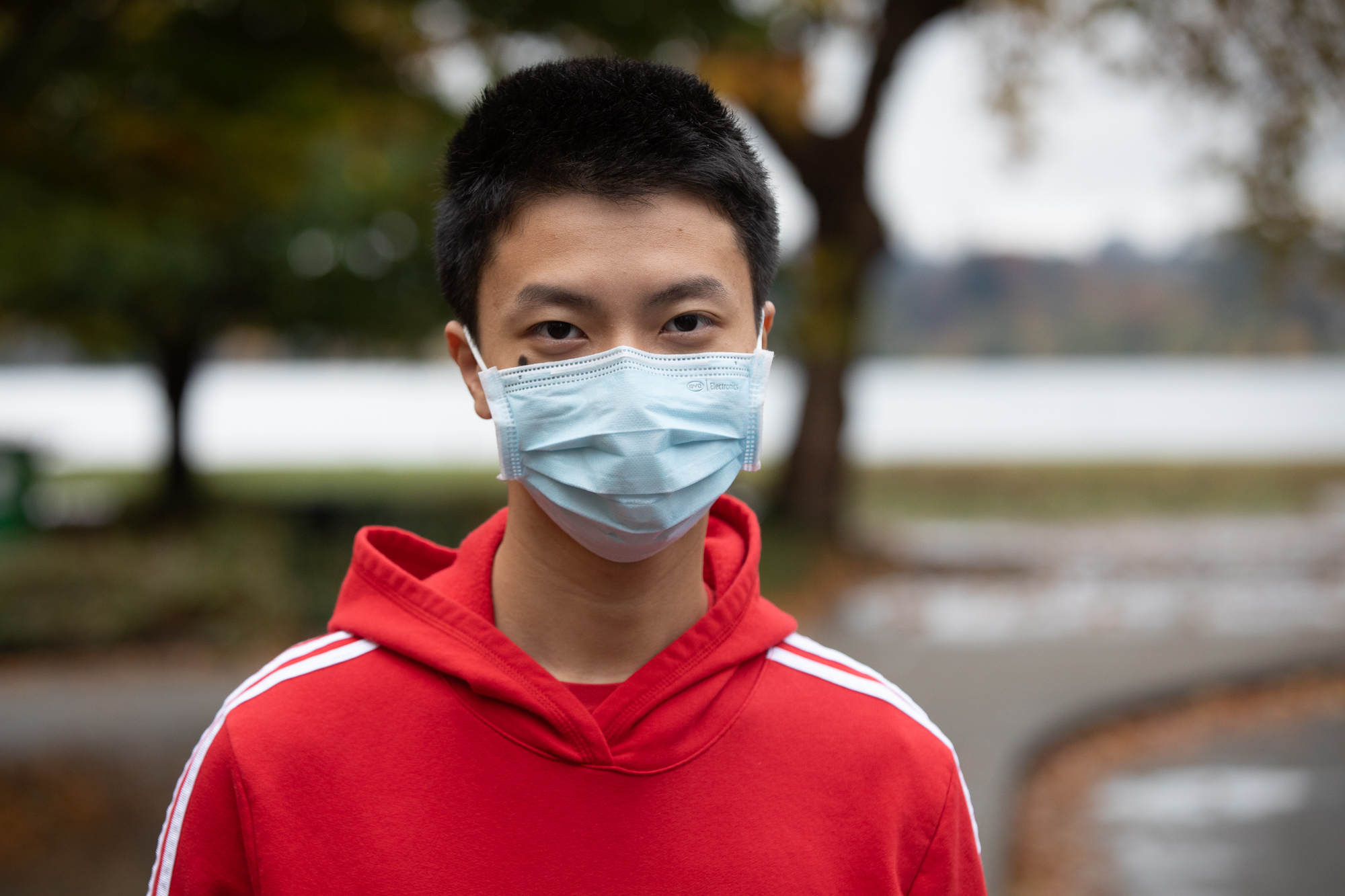 First-time voter Jim Zheng turned 18 on Election Day and cast his ballot at the Green Lake dropbox in Seattle on Nov. 3, 2020. (Jen Dev/Crosscut)

First-time voter Jim Zheng turned 18 on Election Day and cast his ballot at the Green Lake dropbox in Seattle on Nov. 3, 2020. (Jen Dev/Crosscut)

On Capitol Hill, voters — their ballots tucked in their coats to protect them from the rain — were cheered on by Montlake resident Patti Gorman, 73,  who’d dressed up as Lady Liberty for the occasion, foam headpiece and all.

“I'm out here today dressed as Miss Liberty because I used to go with my parents, many, many moons ago, to the polling places, and I learned at a young age how important it is to vote,” she said. “I want to encourage people to participate in our democracy.”

As the service learning coordinator at Seattle Central College, Gorman is the point person for civic engagement on campus. Although she sent in her ballot soon after she received it, she wanted to make sure that the people who hadn't voted yet are cheered on as they dropped theirs off. “We want to make sure that we have visibility,” she said. “People driving by who maybe thought: ‘Oh, my God, I forgot my ballot.’ ”

Not everyone was in the mood for fun, however. The election of 2016 haunts Leora Dillow, who stopped by the drop box at the Lake City library about 10 a.m to return her ballot. The resident of Seattle’s Greenwood neighborhood said she voted for Biden, hoping for a change. For her, she said, the 2016 election was “kind of hard to watch.”

Dillow hopes young voters return their ballots this year, rather than not participate because they aren’t thrilled with either candidate — something she feels cost Hillary Clinton the election in 2016.

Otherwise, she said, “It would be another four years of the same thing we have been having, and I can’t handle that.” 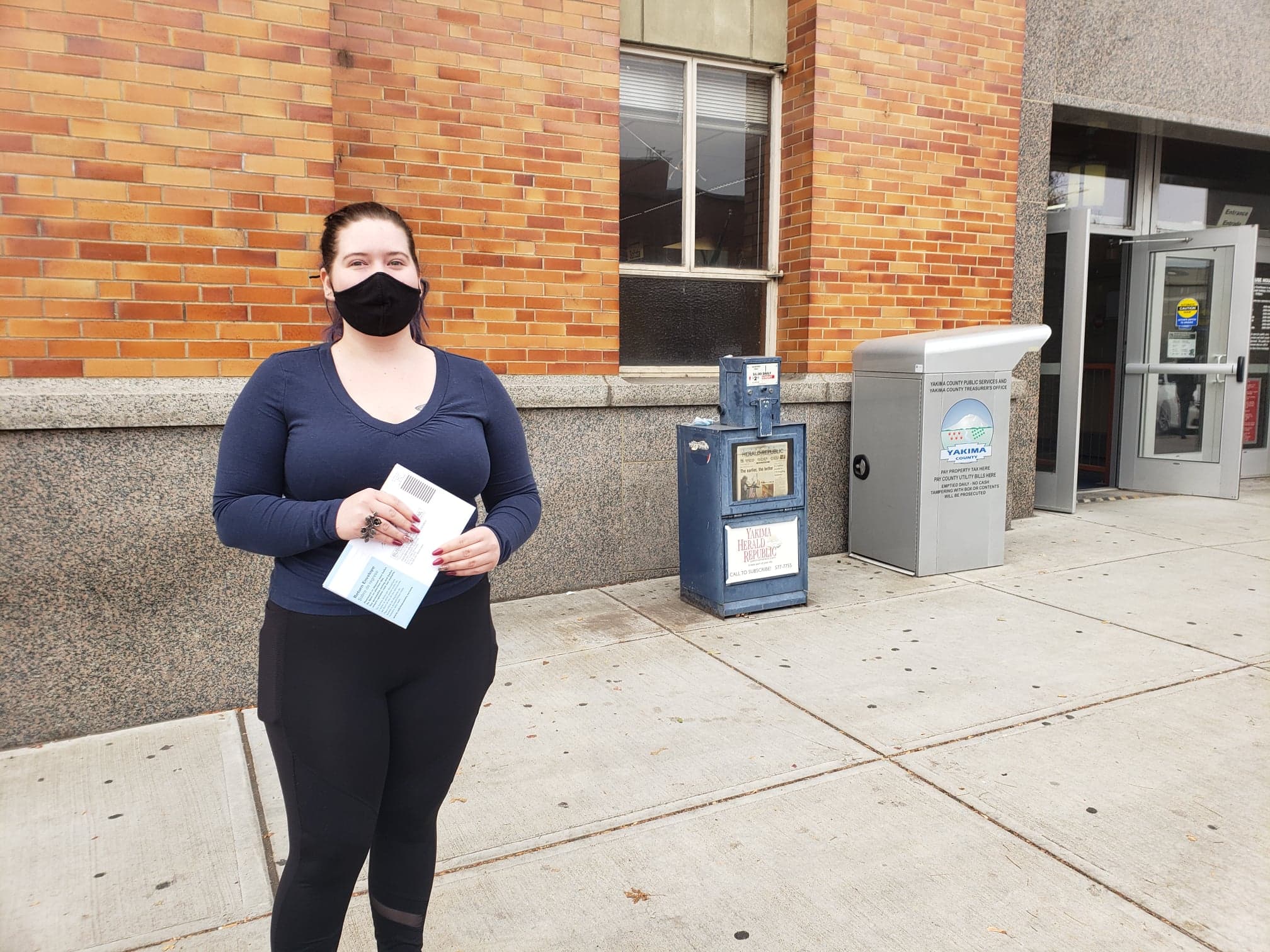 Stephany Royer, a 21-year-old Yakima resident, was feeling nervous about both the presidential election outcome and local elections when she dropped off her ballot in Yakima. (Emily McCarty/Crosscut)

Stephany Royer, a 21-year-old Yakima resident, was feeling nervous about both the presidential election outcome and local elections when she dropped off her ballot in Yakima. (Emily McCarty/Crosscut)

Nerves were high east of the Cascades as well. In Yakima, Stephany Royer is voting for Biden and said she is most concerned about Trump not leaving office peacefully.

“That is worrying as a citizen, because the whole reason we have an election is so the people have a voice,” Royer said.

Royer was equally as concerned about local candidates as the presidential election, because those affect her day-to-day life, she said.

Jacob Taylor, meanwhile, wasn’t particularly anxious. He’s a 48-year-old military veteran in Yakima and is voting for Trump this year, as he did in 2016. He turned his ballot into the Yakima County courthouse on Election Day because he forgot to mail it in.

“I don’t have any concerns — the outcome’s the outcome,” Taylor said. “What happens, happens.”

In addition to anxiety around who would be the next president, some voters also feared the unrest that could come if the outcome was uncertain.

Barbara Pamplona, 48, who voted in Bellevue, said the future of our country and the world is up to us, not whoever is in the White House.

“I think, systemically, the U.S government has been flawed from the very beginning,” said the writer, who is Black.

Racism isn’t going to suddenly disappear if Biden is elected, she said. She voted for him, but called Biden the lesser of two evils.

“The change we need is bigger,” Pamplona said. She hopes the protests will grow and evolve, potentially involving all workers in a national strike.