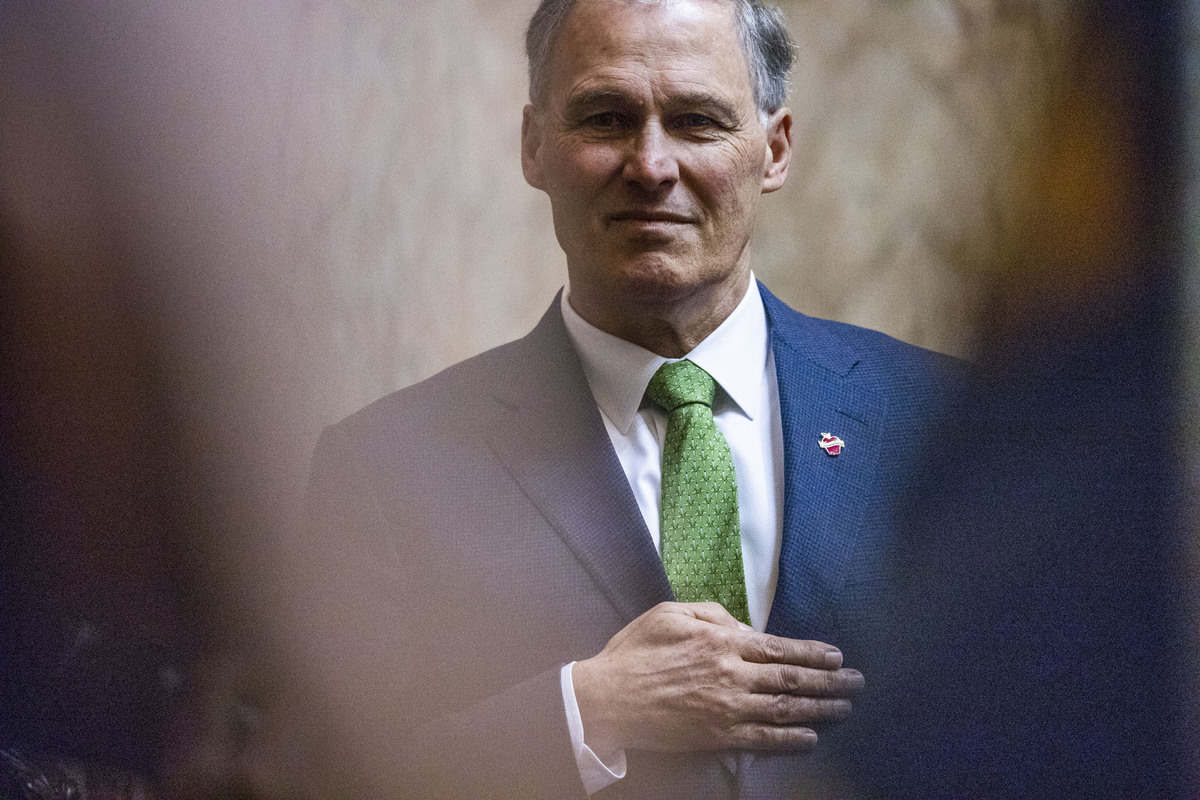 Washington state voters came out in force to support Democrat Joe Biden for president on Tuesday, in an election that also ushered Democratic Gov. Jay Inslee into a rare third term in office.

Elsewhere in the country, the results in the presidential race were less decisive, making it unclear Tuesday evening whether Biden had won the presidency, or whether Republican Donald Trump had secured another four-year term.

Many votes remain to be counted in the U.S. election, which involved more mail-in ballots than at any time in the nation’s history due to increased voting by mail during the COVID-19 pandemic.

In Washington state, where mail-in voting has been the norm for a decade, early returns from Tuesday’s election showed Biden winning 61% of the statewide vote, compared with 37% for Trump.

Inslee, meanwhile, was leading Republican challenger Loren Culp by about 18 percentage points. In the first batch of election results, Inslee had won 59% of ballots counted. Culp, the police chief in the northeastern Washington town of Republic, had captured about 41% of votes as of Tuesday evening.

Throughout the campaign, Culp criticized Inslee’s response to the COVID-19 pandemic, railing against the statewide orders that closed businesses and required people to wear masks in public.

On other issues, such as gun control, the two men were also diametrically opposed. In 2018, Culp gained national attention when he refused to enforce a voter-approved gun-control measure that Inslee supported.

Should Inslee’s lead hold, he would become only the third governor in Washington history to win three terms in office. The last was Republican Dan Evans, who served as governor from 1965 to 1977.

On Tuesday night, Inslee called it a “great honor” to be reelected. He characterized the results as Washington voters endorsing his approach to managing the pandemic.

“I didn’t just win this election tonight — science won. And therefore the health of our children and our grandchildren, and our loved ones who are threatened today by COVID, and in the long term, by the evils of climate change,” said Inslee, who has made combating climate change one of his top issues.

Culp, meanwhile, did not concede the race Tuesday night. He told supporters at a rally in Tenino that “the early results are not what we were hoping for,” but that many votes have yet to be counted.

“...We are going to wait until those people have their voices heard,” Culp said.

Election officials will release additional results as more ballots are counted in the coming days, as is standard in Washington’s vote-by-mail system. Since 2011, all of the state’s 39 counties have voted by mail.

Also on Tuesday’s ballot was a measure to decide whether all school districts in Washington must teach age-appropriate, scientifically accurate sex education.

Right now, school districts can choose whether or not to teach sex ed. If they do offer it, it must be scientifically accurate and adhere to statewide learning standards. But earlier this year, the state Legislature approved a measure that would require sex education to be taught in all districts. Another part of the bill would require sex education classes to include lessons about affirmative consent, as well as information about LGBTQ individuals.

Opponents of the measure collected enough signatures for a referendum effort, meaning voters now get to decide whether it goes into effect.

In Tuesday’s early returns, 60% of Washington voters were approving Referendum 90. If those results hold, the mandatory sex education measure the state Legislature approved earlier this year will go into effect.

As of Tuesday evening, only 40% were voting to reject R-90 and repeal the sex-education law.

The sex education debate has become a central issue in the race for state superintendent of public instruction. The incumbent, Chris Reykdal, has been locked in a contentious reelection bid as he seeks a second term as state schools chief, a nonpartisan position.

Reykdal faces Maia Espinoza, the executive director of the Center for Latino Leadership, who has built a campaign largely on opposing the mandatory sex-education law. Reykdal, a former Democratic lawmaker, was a key proponent of the bill.

On Tuesday, Reykdal was leading with close to 57% of the vote. Espinoza had only about 43%.

Democrats have set their sights on winning the secretary of state’s office, a position Republicans have held in Washington state for more than 50 years.

Kim Wyman, the incumbent, is a moderate Republican who has touted Washington’s vote-by-mail system as safe and secure, often countering Trump’s baseless claims that mail-in voting is rife with fraud.

Still, Wyman’s opponent, Democratic state Rep. Gael Tarleton of Seattle, has leaned into a campaign strategy of trying to link Wyman to Trump, accusing Wyman of not criticizing the president forcefully enough.

On Tuesday, Wyman appeared to have beat back those attacks. She was ahead with 52% of the vote, compared with Tarleton’s 48%.

Democrats, meanwhile, looked as if they would reclaim the position of state treasurer, which Republicans somewhat unexpectedly won in 2016. On election night, the Republican  incumbent, Duane Davidson, trailed Democratic state Rep. Mike Pellicciotti, who led with 56% of the vote.

In the race for lieutenant governor, there was no doubt that a Democrat would be ahead on election night. The only question was: which one?

In early returns, U.S. Rep. Denny Heck, D-Olympia, was on top. Heck, who announced last year he would be retiring from Congress, led with 47% of the vote on Tuesday. His Democratic opponent, state Sen. Marko Liias, D-Lynnwood, had only 34% of the vote. A remarkable 19% voted for a write-in candidate; many of those votes probably went to former Bothell Mayor Joshua Freed, a Republican, who staged a coordinated write-in campaign.

The two Democrats ended up facing each other in the November election after they won the most votes in the Aug. 4 primary. Under Washington’s primary system, the top two vote-getters in the primary advance to the general election, regardless of their party affiliation.

While the two men share some similar views, Liias had argued he would be a voice for “bold, transformational change” at the state level. Heck, meanwhile, emphasized the importance of following Senate rules of decorum, while arguing his experience serving in many levels of government — including as chief of staff to former Gov. Booth Gardner — made him the best qualified for the position.

The job of the lieutenant governor primarily involves presiding over the state Senate and filling in for the governor when he or she is out of state.

Two Democrats are competing to replace Heck in Washington’s 10th Congressional District, which includes Olympia and part of Tacoma. On Tuesday, Marilyn Strickland, a former Tacoma mayor, led with 50% of the vote. The other Democrat in the race, state Rep. Beth Doglio, captured 36% of early returns, while write-in votes totaled 14% of early votes counted.

If elected, Strickland would be the first Black person to represent Washington state in Congress, and the first Korean American woman nationwide to be elected to the U.S. House of Representatives. Doglio, who identifies as bisexual, would have been the first openly LGBTQ member of Washington’s congressional delegation.

While some of Washington’s congressional races remained close on Tuesday, it wasn’t clear that any would flip from one party to another.

After a lackluster performance in the August primary, first-term U.S. Rep. Kim Schrier, D-Sammamish, looked as if she would hold on to her seat.  Schrier was winning 54% of the vote Tuesday night, outperforming Republican Jesse Jensen, who had 46%, in the 8th Congressional District, which stretches from eastern King County over the mountains toward Chelan.

It looked as if Black women would pick up several seats in the state Legislature, including a hotly contested state Senate seat.

Nobles, who also serves on the University Place school board, captured nearly 52% of the early vote, while O’Ban had about 48% on Tuesday night.

Right now, the state Senate has zero Black members, but that would change if Nobles maintains her lead over O’Ban. If elected, Nobles would be the first Black person to serve in the state Senate since former state Sen. Rosa Franklin, D-Tacoma, retired a decade ago.

In the state House, several Black female candidates, including two incumbents, looked as if they would win their races. If those results hold, the number of Black women in the state House would triple, from two to six.

Alexis Turla, the co-founder of a political action committee working to elect Black women, said Tuesday marked the culmination of years of work to recruit and support strong Black female candidates. She called the night’s event’s “historic” and “unprecedented.”

"This is a moment that could be a catalyst for change in our state," Turla said.

A 10th candidate, who is gender nonbinary and identifies as Black femme, Sherae Lascelles, was trailing in their race on Tuesday night. Lascelles, who has founded multiple nonprofits and is an advocate for sex workers, was about 34 percentage points behind state Rep. Frank Chopp.

Chopp, a Democrat, recently stepped down from the powerful position of House speaker.

Lascelles, of the Seattle People’s Party, performed better against Chopp in the August primary than any candidate who has ever challenged him.

Ultimately, however, Chopp was easily winning another two-year term representing Seattle’s 43rd Legislative District. On Tuesday night, he had captured 67% of the early vote, compared with Lascelles’ 33%.

In another Seattle legislative race that has proved contentious, Democrat Liz Berry, the executive director of the Washington State Association for Justice, was 17 percentage points ahead of fellow Democrat Sarah Reyneveld, an assistant attorney general. The two women are competing to replace Tarleton in the 36th Legislative District, which includes Queen Anne, Ballard and Magnolia.

Elsewhere, state Sen. Mark Mullet, D-Issaquah, was struggling to hold onto his seat in a competitive race against another Democrat in East King County.

Mullet has drawn the ire of progressives over his reluctance to support certain tax measures, as well as his opposition to a clean fuel standard. Labor-backed political action committees are supporting his opponent, Ingrid Anderson, a nurse who lives outside Snoqualmie. Unlike Mullet, Anderson says she favors enacting a new tax on capital gains, which include profits from selling stocks and bonds.

On Tuesday, Mullet was garnering a little over 48% of the vote, while Anderson had close to 50%.

Democrats appeared poised to pick up another state Senate seat in the 10th Legislative District, which includes Island County and parts of Snohomish and Skagit Counties. There, Helen Price Johnson, an Island County commissioner, was leading state Sen. Ron Muzzall, a Republican from Oak Harbor who was appointed to the Senate last year.

But Republicans found a few reasons to celebrate, too — especially in Southwest Washington, where two Democratic incumbents trailed Republican challengers on Tuesday evening.

This story was updated to add quotes and additional details about state legislative races, as well as to reflect slight changes in results.