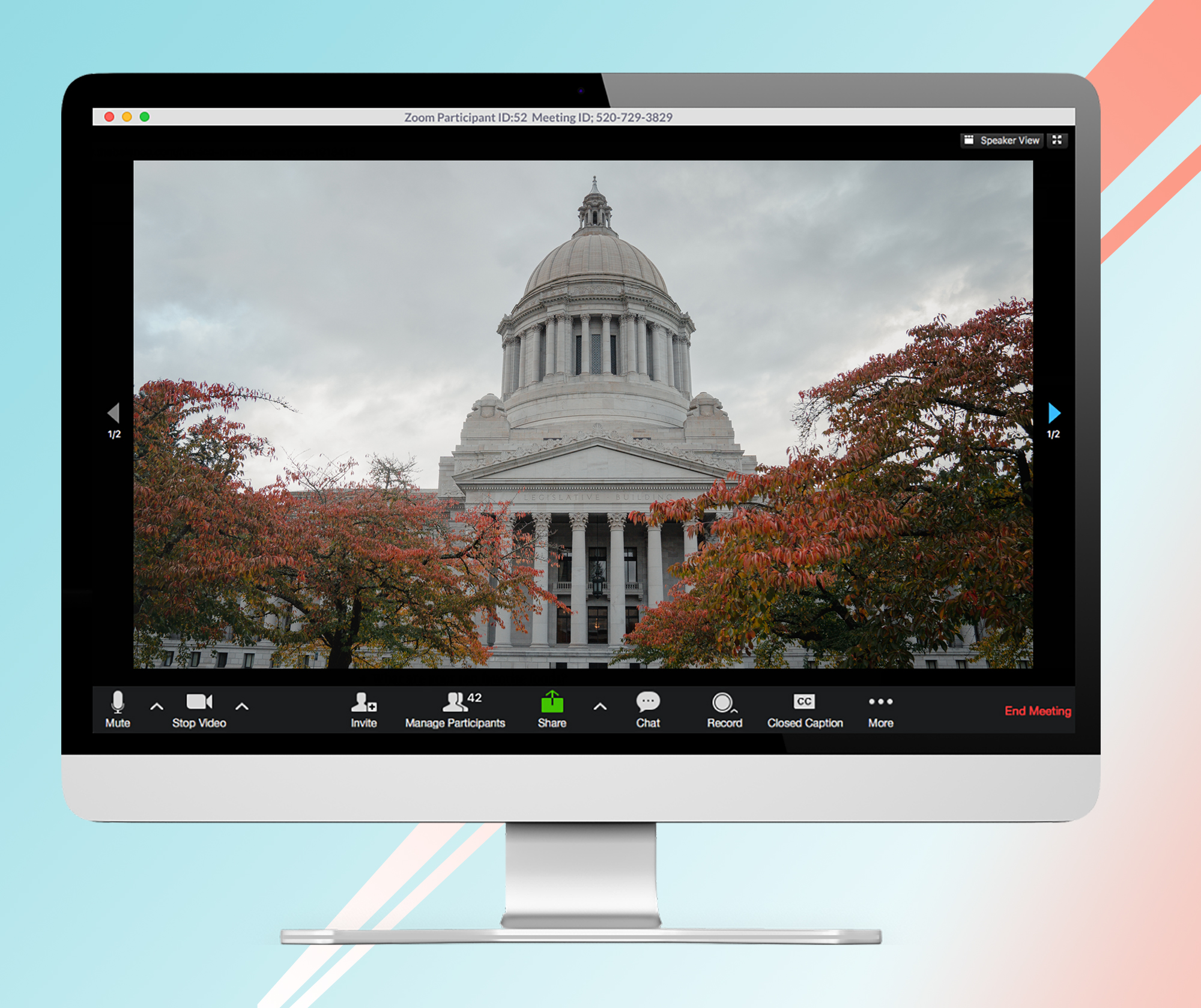 In response to the COVID-19 pandemic, both chambers of Washington's Legislature are making it easier for people to testify on pending legislation by using Zoom from their living rooms. Other aspects of the Legislature's operations will also go remote in 2021. (Photo illustration by Crosscut)

COVID-19 has created plenty of difficulties in the year 2020. When it comes to helping citizens navigate the arcane world of Washington’s Legislature, however, the pandemic actually is making it easier.

The state House and Senate have been on hiatus since March, when they adjourned for the year, just as the coronavirus pandemic was taking hold.

On Thursday, legislative leaders discussed specific plans for how they’ll tackle next year’s legislative session, which is set to begin in January.

For everyday Washingtonians, the changes mean they will be able to testify on legislation from a kitchen table or living room, rather than driving to Olympia and appearing in person before a committee to speak directly to legislators about a bill.

While some state Senate panels have allowed remote testimony in recent years, it hasn’t been a universal practice across the Legislature’s many committees. Taking advantage of the limited option also meant having to sign up days in advance and drive to a location that may be many miles away.

Now, all committee meetings will be held remotely, with people being able to sign up and deliver comments via Zoom from anywhere.

“I think this actually gives constituents from all over the state an even better opportunity to have access,” said Senate Majority Leader Andy Billig, D-Spokane, at a meeting Thursday. He said people would be able to sign up to testify on pending legislation as late as one hour before a scheduled committee meeting.

House Speaker Laurie Jinkins, D-Tacoma, said she expects more people will want to testify on bills at the Legislature now, since doing so won’t require driving over a snowy mountain pass or traveling hours by bus or car.

To accommodate that increased interest, the House is planning to create additional ways to accept public testimony by email or in writing, Jinkins said.

Meanwhile, state legislators and staffers will mostly be working from home, while lobbyists and members of the public will be limited from roaming buildings of the state Capitol.

All of it will mark a major shift from the typical environment during legislative sessions, where voters, lobbyists and journalists jostle to get face time with legislators, and staff members scurry between chambers as bills are drafted and amended in real time.

“We have to be able to do the people’s work, it has to be able to be done in an accountable and in a transparent way, and people have to be kept safe,” Jinkins said Thursday. “Those are the things that we're trying to balance.”

In the Senate — the more traditional of the Legislature’s two chambers, where members still vote by saying “yea” or “nay” rather than by machine —  some employees and senators will still be able to come in person, but the number of people on the Senate floor will be limited for health and safety reasons.

The House has yet to approve a formal remote operations plan, but has been working on similar preparations.

The House is planning to operate almost entirely remotely, although the House speaker and a few others will sit at the rostrum to preside over remote voting sessions, Jinkins said. The House has twice as many members as the Senate, as well as smaller offices, which could make social distancing measures more complex.

House members may need to have equipment sent to their homes to help them vote from afar, Jinkins said.

Some Republicans expressed concerns Thursday about the Senate’s remote operations plan, including about how it might affect the public’s ability to gather at the Capitol and influence legislation.

“I think we fall short a little bit,” said state Sen. John Braun, R-Centralia, who voted against the plan on Thursday. ”Our top priority should be access by the public.”

Jinkins said demonstrations and protests at the Capitol will be discouraged, in line with public health guidelines limiting the size of in-person gatherings to curb the spread of COVID-19. But, she said, nothing technically stops people from coming and making their voices heard outside of mostly empty legislative buildings.

“...Everyone has a right to be heard, but it is unsafe to do so publicly in the manner folks are used to in Olympia,” Jinkins wrote in an email Thursday. Thurston County, where Olympia is located, currently advises against outdoor gatherings of more than 50 people, saying they are unsafe.

Floor sessions will continue to be recorded and livestreamed by TVW, the state’s public affairs network.

Legislative technology staffers are also preparing for the possibility that people will try to cause some trouble or interrupt online meetings, such as by “Zoom-bombing” official legislative proceedings.

Jinkins wasn’t especially worried about that issue, telling reporters that, so far, when someone has interrupted or crashed her virtual meetings, it has been extremely brief and one of the more amusing parts of her day. “I can tell you it always involves someone’s butt,” Jinkins said.

The most important thing, Jinkins said, is to make sure legislative staffers can quickly kick people out of online committee meetings if they are causing issues. She said legislative technology experts are preparing for all of that.

The bigger concern may be whether the Legislature can work at its usual breakneck pace when all of its operations have been upended. Billig said he expects things will move a little slower than usual.

Jinkins said she’s been encouraging lawmakers to file fewer bills to try to streamline their work.