Protesters took to the streets on election night, saying they will remain focused on police brutality whether or not Trump is reelected. 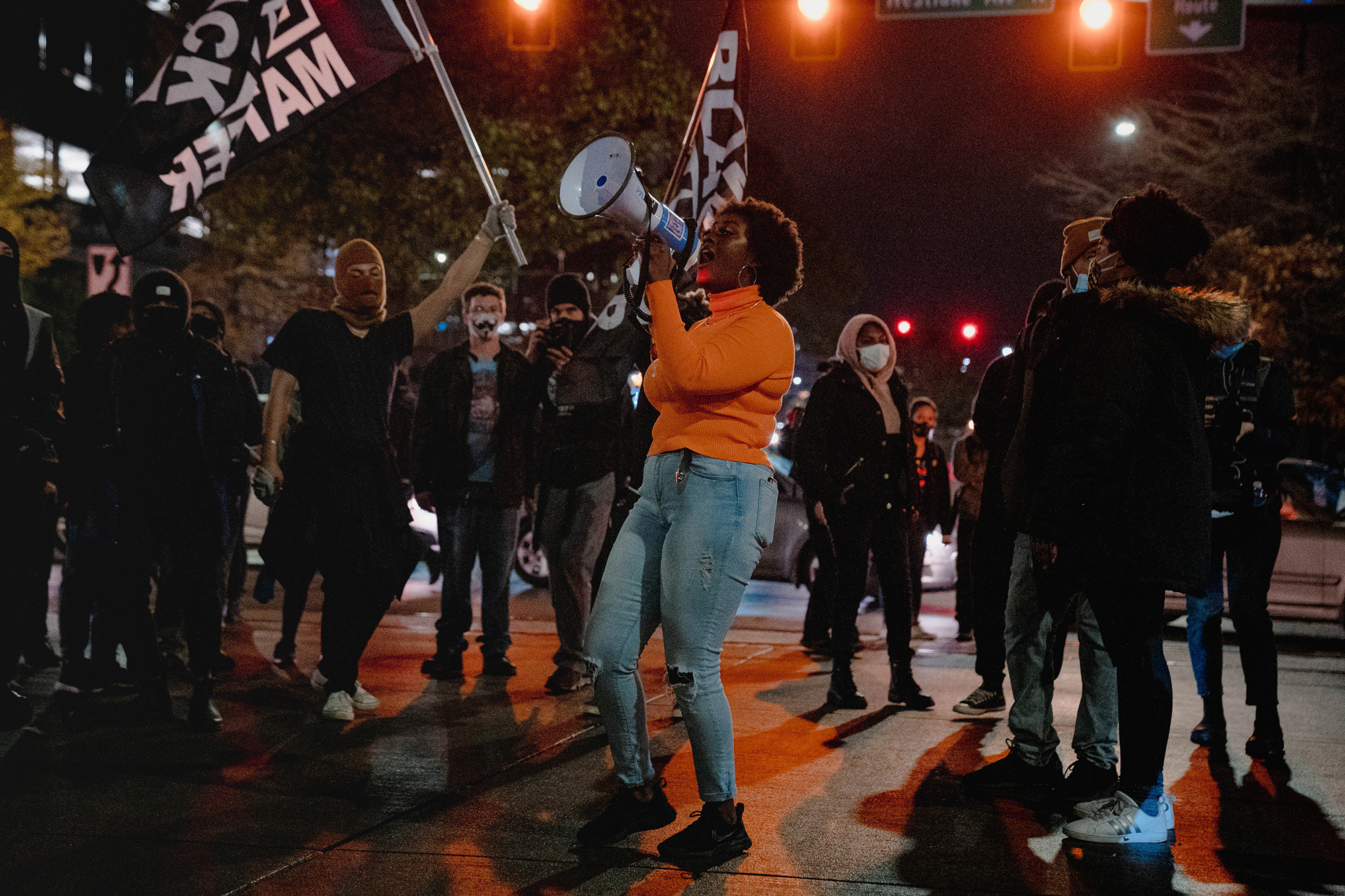 A march organizer addresses the crowd as demonstrators take up the intersection of Westlake Avenue and Mercer Street, in South Lake Union in Seattle, Wash., on election night on Tuesday, Nov. 3, 2020. (Jovelle Tamayo for Crosscut)

With the race for the presidency still hanging in limbo, one thing was clear Tuesday night on the streets of Seattle: No matter who wins, the protests that have gripped the city for months aren’t likely to subside any time soon.

At least two groups marched through the city, merging for a time in South Lake Union before heading up to Capitol Hill. As much of Seattle and the country stayed indoors on a rainy night, glued to election results on their televisions and phones, the protesters’ message was only peripherally related to the election. Instead, they focused on the same themes and messages that have unified marchers through the summer and into the fall — against police brutality, for racial equity.

Perspective: A presidency hanging in the balance, a nation unchanged

For some, the presidential election won’t change what they believe to be the broken underpinnings of society. “This is just a reflection that you have two candidates who do not support Black lives or Black liberation,” William Parham, who was walking near the back of the group, said of the night’s protests. He called Donald Trump “terrible,” but also pointed to Joe Biden’s support for the crime bill of the early ’90s and Kamala Harris’s history as a prosecutor in California.

One protester, who gave her name as Jade, nodded toward the election and said it was more important than ever for demonstrators to come out in a show of unity and to show that their message will continue to be voiced. A possible Biden win would not mean they will stop their “disruptive but not destructive” protests.

“What the president is talking about is what we’re fighting,” she said. “They’re both garbage, but with Biden what we can do is push buttons and be disruptive.” 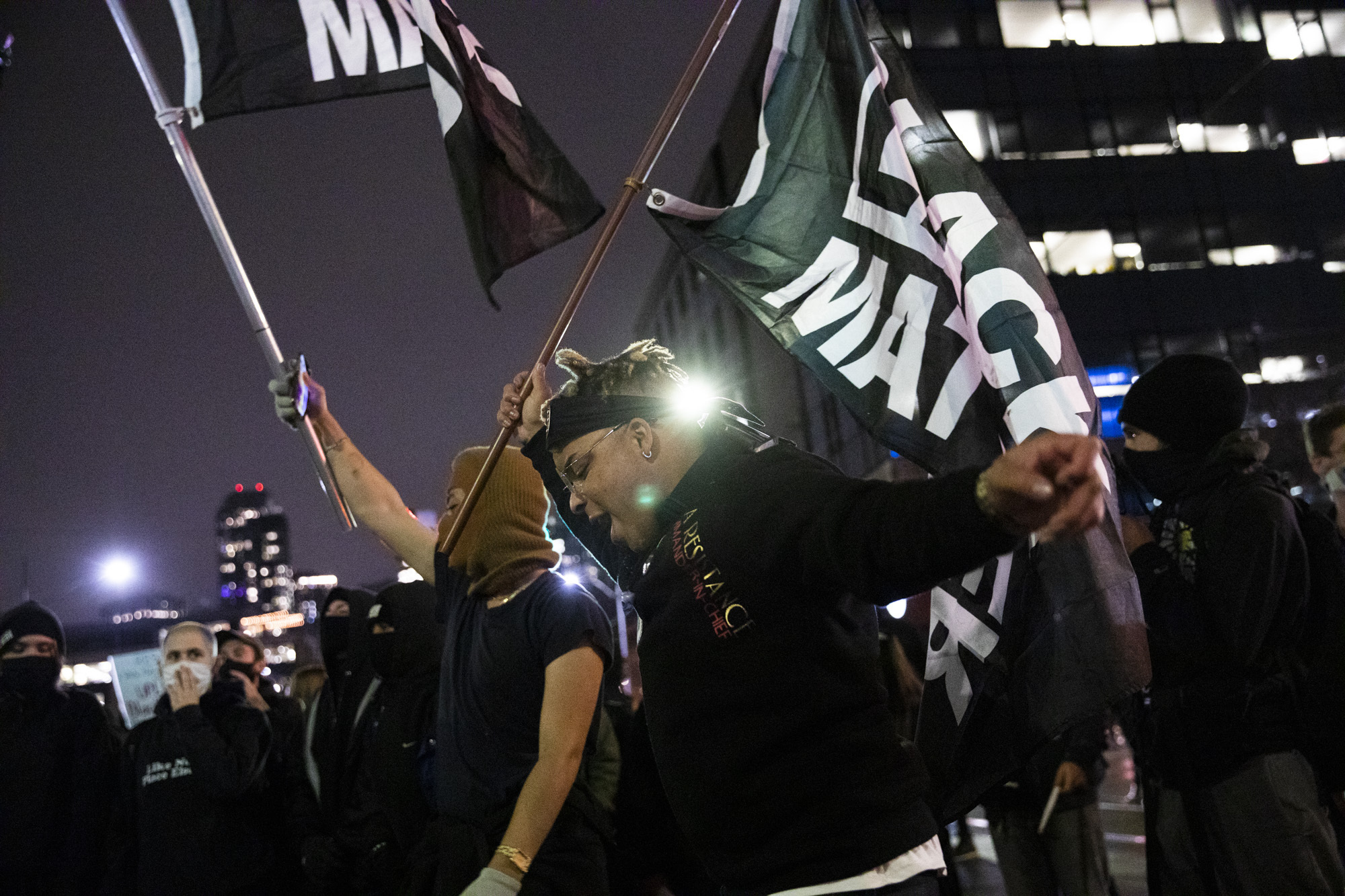 Leading into Election Day, the mood in Seattle and other parts of the country was tense with anticipation about how the public would react to news of who won the presidency. Across the country, images of businesses boarding up windows were broadcast across newspapers and television. In Seattle, on Capitol Hill, businesses were boarded up — although, in true 2020 fashion, it was unclear whether this was in response to the pandemic, the ongoing protests or fear of civil unrest on election night.

Regardless, the Seattle Police Department limited time off for officers in preparation for possible protests. With the results of the presidency still unknown, the streets were not flooded with protests or rioting. But police still clashed with the group on Tuesday night; as volunteer drivers blocked intersections for the protesters, police gave orders for the cars to disperse and for the protesters to keep moving. When the protesters continued to occupy the streets, police rushed in and made several arrests.

The department said in a tweet that eight arrests were made for “pedestrian interference, obstruction, assault on an officer, reckless driving, and criminal mischief.”

After some brief clashes in Amazon’s backyard, a smaller group moved up Capitol Hill. One business owner near Cal Anderson Park — who declined to give his name — was relieved that the protesters weren’t smashing any glass.

“Every broken pane of glass is just a vote for Trump,” he said.

Reflecting on the protests throughout the summer, he said he believed the demonstrators’ heart was in the right place. But he felt their message had been usurped by anarchists.

“I actually think that this isn't Black Lives Matter,” he said. “I think this is an anarchist movement, and I think it's mostly about white entitlement.”

For one protester, who declined to give her name, the more important political focus was local — not national.

“It's what's happening at the local level we're worried about, and they're still not listening,” she said of local officials.

For some who have been pushing throughout the summer for local change, Tuesday appeared to bring some good news from the ballot. King County Charter amendments 5 and 6, which would turn the county sheriff into a political appointee and give more authority over policing to the King County Council, were both passing comfortably.

Lilly Fowler contributed to this story.