What to expect on election night in Washington state

How long will counting ballots take? Will people be demonstrating? Here’s what we’re keeping an eye on tonight. 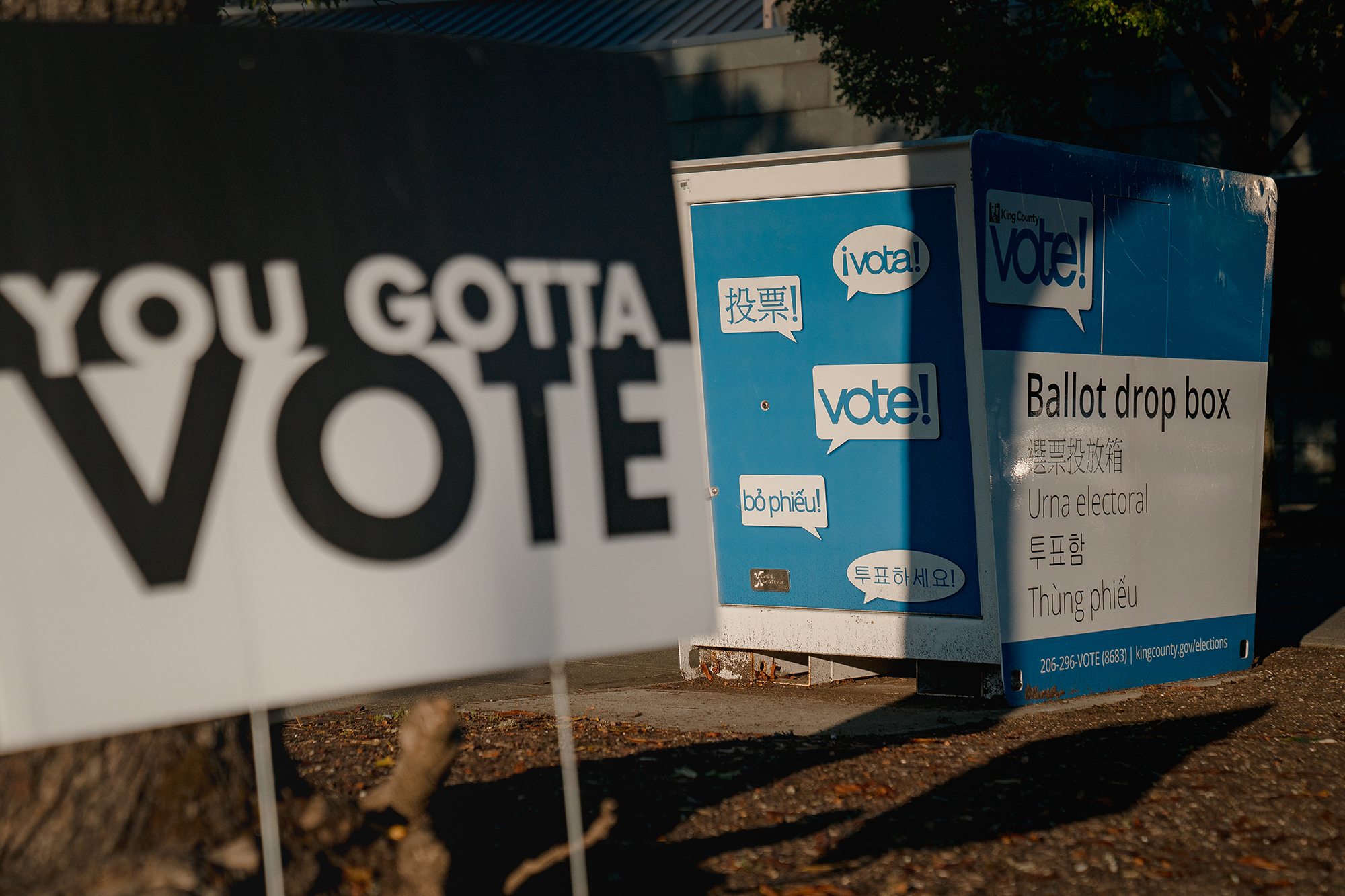 A sign encouraging voting in front of a ballot drop box at the Beacon Hill Library on Oct. 2, 2020, in Seattle. (Jovelle Tamayo for Crosscut)

The buildup to Tuesday’s election has been intense, but it’s finally here. And there are several reasons to expect that Tuesday won’t be a quiet evening in quarantine.

Voter turnout in 2020 could set a record in Washington state. And, depending on how events unfold on Tuesday, many observers predict people could take to the streets to express their feelings.

Here are some of the things to watch — from when results will start rolling in to which races are proving the most contentious.

How to check results

National intelligence agencies and election officials have warned that bad actors may try to confuse voters by releasing inaccurate results on election nIght. These disinformation efforts could be intended to sow distrust in the actual results of the election, the FBI has warned.

To avoid getting fooled, you should check the official results with the Washington Secretary of State’s Office and be wary of early results you see on social media. Shortly after 8 p.m., results will start appearing on the secretary of state’s website. It’s best to wait a bit before drawing too many conclusions, since the vote totals in statewide races will shift as each county adds its results to the statewide totals, which happens at slightly different times between 8 and 9 p.m.

Each county is planning to release one set of results on Tuesday night, but will post additional results in the coming days.

Final results will take a while

With Washington’s vote-by-mail system, ballot counting can stretch on for several days, and sometimes weeks. This is normal and not a sign of corruption or malfeasance.

Rather, election results are not considered final until weeks later, when they are certified. That timeline ensures all ballots can be counted and recounts conducted in close races.

Other states may also take longer to count ballots this year, since more states are relying on mail-in voting during the COVID-19 pandemic. That means the winner of the presidential election could be unclear on election night, said Todd Donovan, a political science professor at Western Washington University.

That doesn’t mean that votes counted after Nov. 3 are somehow not valid. On the contrary, election results have never been final on election night, even if one candidate has a clear enough lead to declare victory on Election Day.

In Washington state, the days before certification are also when voters can correct issues with their ballots, such as missing signatures or signatures that don’t match voters’ registration files. You can check if your ballot has been challenged on vote.wa.gov, the state’s voter registration portal. You can then contact your local election office to try to address your signature issue and get your ballot counted.

Despite the history of elections taking weeks to certify, President Donald Trump has suggested this year that no ballots should be counted after Nov. 3. That kind of proclamation could contribute to significant “chaos and litigation” following Election Day, Donovan said — particularly if the early results in the presidential race are close, as opposed to showing a landslide victory for Democrat Joe Biden.

“There is every reason to think Trump will either declare victory or declare fraud,” Donovan said of the president, who has at times cast doubt on whether he will accept the results of the election if he loses.

That kind of uncertainty could prompt protests and demonstrations in cities around the country, including in Seattle.

“I don’t remember any other election where it has been this tense or this divisive, where both sides are like, ‘We’re going to pop off,’ depending on the results,” said Christina Blocker, a Democratic political consultant from Tacoma.

Particularly if Trump declares victory on election night, and then encourages states to not count additional votes, “I think you will see Democrats and people on the left in the streets,” said Cornell Clayton, the director of the Foley Institute for Public Policy and Public Service at Washington State University.

At the same time, it appears supporters of Trump will be out in full force on Election Day showing their support for the president, which could lead to other confrontations.

In recent days, Trump supporters have blocked traffic on highways in New York and New Jersey. Supporters of the president also surrounded Biden’s campaign bus in Texas, which Biden characterized as an attempt to run his team “off the road.” The FBI is investigating the Texas incident, The New York Times reported.

Clayton said he expects the president’s supporters to be in the streets on Tuesday, especially in rural areas. He said those pro-Trump demonstrations could include members of the so-called militia movement, a loosely knit collection of groups known for their far-right views and anti-government extremism.

Alex Hays, a Republican political consultant, said he thinks conflict between far-right and far-left groups is possible, in part because “everybody thinks the other guy is going to do something.”

Hays said that could create “a political violence version of the prisoner’s dilemma,” in which people end up escalating tensions because they feel like they need to strike first.

In Washington state, the current high water mark is the 2008 presidential election, when nearly 85% of registered voters cast their ballots.

This year, election officials are predicting that close to 90% of registered voters may participate.

So far this year, Washington voters are returning ballots at much higher rates than they did in 2016. As of Monday, nearly 73% of registered voters had submitted their ballots. At the same point during the 2016 election cycle, only about 53% had already voted.

“It’s really astounding that we might break the record of the first term of President Obama coming into office,” said Alexis Turla, diversity co-chair with the National Women’s Political Caucus of Washington, who also co-chairs a political action committee working to elect Black women.

Still, it’s not entirely clear how much of the early turnout is driven by regular voters turning in their ballots earlier versus people casting ballots who don’t normally vote at all, Blocker said. Some counties mailed ballots to voters earlier this year, which could also be driving up early turnout numbers.

Just how badly will Trump lose the Evergreen State?

Trump did not win Washington state in 2016, or come anywhere close. But experts think he could do even worse this year than the 38% support he garnered four years ago.

Clayton, the WSU Foley Institute director, said he thinks many of Washington’s mainstream or moderate Republicans will withhold their votes from Trump this year, after seeing the past four years of his policies and performance in office.

Among Washington voters, Biden also may outperform Hillary Clinton, who won 54% of the state’s vote share in 2016.

Donovan, the WWU professor, said he thinks fewer voters will be undecided this year in Washington state, which most likely will drive up Biden’s numbers.

“Seven percent of people voted third party last time. Those were protest votes; they were not Trump and not Clinton,” Donovan said.

This year, he said, "My guess is more of those non-Clinton people will go to Biden."

Three-term governors are a rarity in Washington state. Only two Washington governors have ever won three terms — and only one, Republican Dan Evans, has served those three terms consecutively.

That has made the last remaining positions held by Republicans — secretary of state and treasurer — prime targets for Democrats this year.

Judging by August’s primary results, Democrats will most likely retake the treasurer’s office, which Republicans somewhat unexpectedly wrested from Democratic control in 2016.

But the secretary of state, who serves as the state’s chief election official, is more of a question mark.

Elsewhere on the ballot, Washington’s top-two primary produced a pair of Democrat vs. Democrat matches that are drawing significant attention this year.

One is the congressional race between Marilyn Strickland, a former mayor of Tacoma, and state Rep. Beth Doglio, an Olympia Democrat who is a longtime climate activist. The two women are competing to represent Washington's 10th Congressional District, which includes Olympia.

The current occupant of that seat, U.S. Rep. Denny Heck, is not seeking re-election to Congress. Instead, he is locked in his own intraparty battle in his bid to become Washington’s next lieutenant governor.

Meanwhile, in state legislative races, nine Black women are running this year, more than any time in recent memory.