Seattle Mayor Jenny Durkan will not run for a second term

Durkan and the city went from optimism to a series of crises this year, from COVID-19 to social unrest and the city budget. 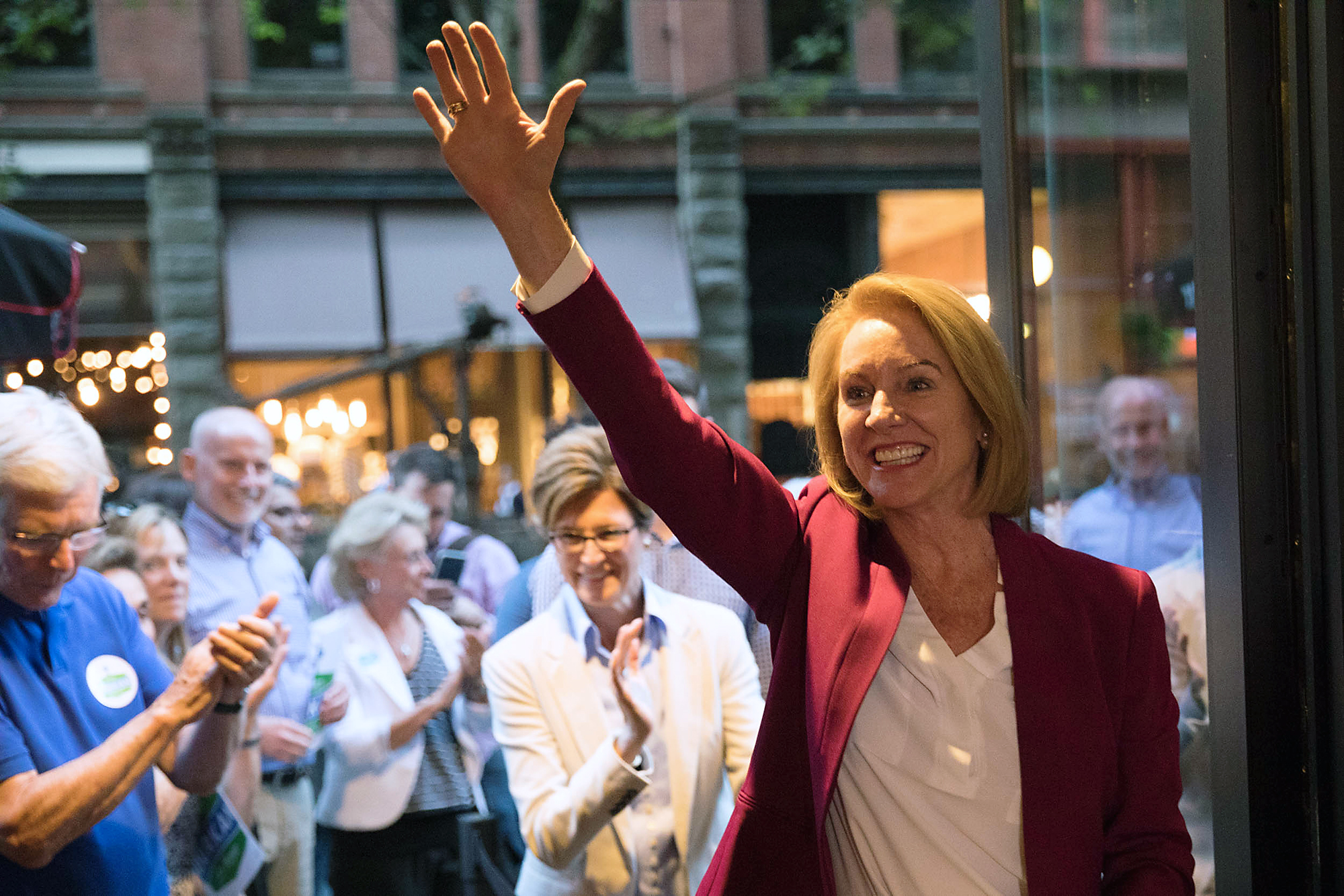 Seattle Mayor Jenny Durkan will not seek reelection to a second term, she said Monday, blowing wide open a mayoral race that will unfold in a moment of tumult rarely seen in the city’s history.

Durkan, a moderate Democrat by Seattle’s standards, announced the news in a video message. The issues before the city have been so great, she said, she faced a choice: “I could spend the next year campaigning to keep this job or focus all my energy on doing the job. There was only one right choice for our city: Doing the job."

Her decision comes after a bruising year in City Hall that began with near-hyperbolic optimism for the city’s future before transforming into one beset by a public health crisis, a hobbled city budget, a social uprising and a fraught relationship with the Seattle City Council.

In announcing her departure, Durkan celebrated the city’s handling of the turmoil. She pointed toward investments and policy the city has made in response to the pandemic, uprisings against police violence and an affordable housing crisis.

At the same time, the year has proved to be an incredible stressor on City Hall, causing immense friction between herself and the city council — on issues like the future of policing and fiscal policy in a pandemic. Under her watch, protesters took over six blocks on Capitol Hill and a third of the council either demanded or suggested she resign from office this past summer after police repeatedly used tear gas. A recall petition quickly gained momentum as well, although it was denied by the state Supreme Court.

Despite the raucous summer, news of her exit was met with conciliatory statements from members of the council. Council President Lorena González called Durkan’s election — the first for a woman in nearly 90 years — “historic” and noted their relationship dating back to 2007.

“I understand and respect Mayor Durkan's decision not to seek a second term,” she said. “During these unprecedented times, the Mayor and I have worked diligently to put City government on a path of productive and collaborative policymaking.”

Councilmember Teresa Mosqueda, who clashed with the mayor earlier this summer and raised the prospect that Durkan resign, similarly struck a consensus-minded tone. “While Mayor Durkan and I have had several disagreements on governing and policy over the last three years, we have also been able to find common ground to work on critical issues, and the community, workers and small businesses in this City are better for it,” she said in a statement.

Both Mosqueda and González have been mentioned as possible candidates for mayor, although neither has committed either way.

Before being upended by 2020, Durkan’s approach to the mayor’s office was largely as advertised in her campaign, often to the frustration of those who opposed her from the start. Her proudest achievements were on issues with broad appeal to Seattlites, including a successful ballot measure to expand pre-k and community college access and efforts to expand transit access. She also began the process of regulating ride-hailing services, including by implementing a minimum wage.

But she’s frustrated progressives, who crave more sweeping policies on housing, homelessness, and policing. Her support for the city’s Navigation Team, which evicted homeless encampments, was often harshly criticized as well.

Nowhere was Seattle’s ideological split more clear than on the question of how and whether to tax large businesses in Seattle. Since she took office in 2017, Durkan has shied away from levying any kind of payroll or employee hours tax, but the council has repeatedly dragged her into that fight. In 2018, the issue boiled over when the council passed a “head tax,” and then quickly repealed it under pressure from business leaders. This year, Durkan was pressured into accepting another business tax that was passed by the council and intended to buoy the city through COVID-19’s budget storm.

Durkan, whom President Barack Obama appointed as the first openly lesbian U.S. attorney in 2009, opted to run for mayor in 2017 after her predecessor, Ed Murray, bowed out of the race amid allegations of sexual abuse. As someone with a high-profile name in a family with deep Seattle roots, Durkan had long been the subject of rumor in past mayoral races that she would toss her hat in the ring. She was finally conscripted to run by a more moderate political base that was reeling from Murray's downfall. In a large field of mayoral hopefuls mostly to her left, Durkan cast herself as the consensus candidate — one willing to work with the city’s business community. With the help of a prolific fundraising machine, Durkan easily won over her opponent, Cary Moon.

When she was elected, her marching orders were clear: address homelessness. Polling consistently showed it to be the top issue for voters, but progress was stubborn. Even as the city spent increasingly large amounts of its budget on homelessness response — and years after Murray declared an official state of emergency — the number of people without stable housing continued to grow.

Under her watch, the city continued to increase spending on homelessness. She also tried to shift focus away from emergency shelter and toward more wraparound services, while directing new voter-approved tax revenue toward building new affordable housing.

But where the council wanted to raise millions more for that effort by taxing local large businesses, Durkan remained adamant that any response was insufficient without help from King County and the state. That spurred her office to push for a regional governing body, which was eventually approved but has not yet begun functioning fully.

At the beginning of 2020, Durkan sounded an intensely optimistic note in her annual State of the City address, promising the world to a city still transitioning into a real metropolis.

But just weeks later, the coronavirus would render her hopes largely moot. As the city and state locked down, the city’s budget, which had done nothing but grow for the past 10 years, was suddenly imperiled.

Months later, protests gripped the city, presenting another enormous challenge to City Hall. What goodwill Durkan had curried as a leader through the pandemic was damaged by a growing chorus of activists who held her responsible for a stagnant police department and aggressive tactics to control demonstrations. The situation quickly spiraled, as police abandoned one of their own precincts and protesters took over six blocks of Capitol Hill. The now-famous Capitol Hill Organized Protest, or CHOP, caught the scornful eye of President Donald Trump.

Tensions grew throughout the summer, as the city council promised cuts to the Seattle Police Department. Durkan pledged large investments in community organizations, but pushed back on specific reductions in the number of police officers, vetoing a bill from the council that promised layoffs.

From her place in the mayor’s office, Durkan seemed to prefer the minutia of managing a collection of city departments over her role as Seattle's outward facing figurehead.

Durkan also placed a premium on privacy. That was due, in part, to her past as a U.S. attorney and the security protections that come with it. But she also sometimes remarked that her high-profile position could be difficult for her family. She occasionally joked about simply disappearing — to be a tugboat driver or in a Thelma and Louise moment.

In a statement, Gov. Jay Inslee praised her time as mayor. “Jenny has led through tumultuous times and had to make difficult decisions with grace and dignity,” he said. “She has always worked to represent the needs of all Seattleites and helped to make the city a world-class place during a time of strong economic transition.”

Whether Durkan would seek reelection again had been an open question for months. She had raised notably little money and those close to her questioned whether it was a job she actually enjoyed doing.

At the same time, progressives in Seattle viewed her as an obstacle to progress on just about every front and were highly motivated to unseat her.

The names of several city council members, including Mosqueda and González, have been floated as possible challengers to Durkan. Few people have declared their candidacy for the 2021 mayoral race yet. Lance Randall, a South Seattleite who currently serves as SEED Seattle's director of economic development and interim executive director, is among them.