Shining a light on the Native vote with data

Native communities are not a monolith — and a new survey shows the range of their political priorities and attitudes. 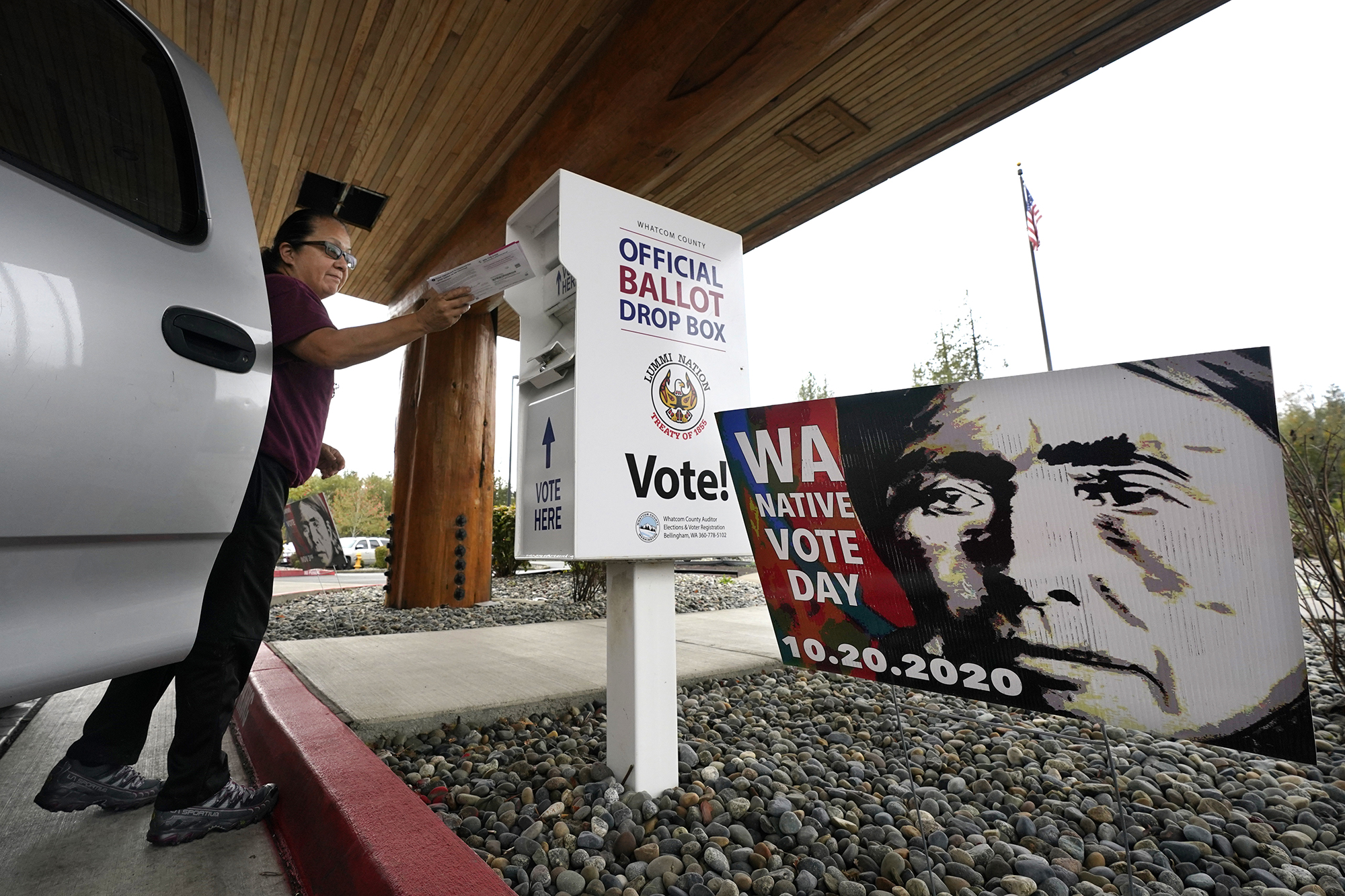 Native voters have long been overlooked by political parties, but November’s presidential election put them in the spotlight — in some cases, they had the power to help swing a state. Reservation communities got a surge of attention in Arizona, for example, where many credit Navajo Nation voters for providing the edge needed to turn the typically red state blue.

But even so, Native voters watched as mainstream media and others muffled their significance in during the 2020 election. One instance  came when CNN aired a graphic that relegated communities that weren’t white, Black, Asian or Latinx to the label “something else,” spurring critiques and memes on social media. As the criticisms pointed out, the misnomer minimized Native impact on the election and hid their communities’ influence.

Leah Salgado (Pascua Yaqui), deputy director of IllumiNative, an advocacy group, says Native people are often made invisible in political discourse and mainstream culture, all of which can damage their ability to advocate for themselves.

“What happened with the CNN graphic was demoralizing for Native people who risked their lives and health to organize around this,” Salgado says. “Even at the beginning of COVID … Native people weren’t talked about.”

Salgado says one solution is fixing those narratives — and to do that, she says, we need accurate data on the significance of the Native vote. That’s why IllumiNative and other Native advocacy organizations put together a team of Native-led researchers earlier this year to create an “Indigenous Futures” survey on Native priorities and power ahead of November’s election.

By surveying over 6,400 Native people across the country, the researchers sought data that could elaborate on respondents’ political priorities and experiences, alongside additional questions examining the impacts of the coronavirus on Native communities. Salgado says the annual survey will aim to provide better information about the priorities and changing demographics of Native communities, while dispelling myths about their political insignificance.

“Native people have been here since time immemorial, but we’re still written out of [history] for many Americans, not just our past but our futures,” she says. “This survey begins that work of laying out what the scope of the problem is.”

Data on Native people in the United States has long been spotty or inaccurate; Native people are historically undercounted in the census, for example. Stephanie Fryberg (Tulalip), the study’s lead researcher, adds that the public doesn’t frequently see data on Native communities at all, so it’s important that what they do see is accurate.

“We’re already small and largely invisible, so these statements carry a lot of weight for people who aren’t engaged with Native people,” Fryberg says. “There are real implications for that.”

Breaking down the monolith

Fryberg says one of the biggest problems in surveying Native people often begins with how studies are conducted. Data is often collected by non-Native researchers who might not know how best to reach out to communities or how to provide a diverse representation of Native people.

This can lead to inaccuracies. Fryberg saw this recently in an Associated Press presidential election survey, which pegged 52% of Native voters as Trump supporters. These results, pulled from a few hundred Native people, starkly contrasted with what she had discovered in the Indigenous Futures survey, where 60% of respondents identified as liberal, 28% as moderate and 12% as conservative.

There could be many reasons for the difference. In the AP’s survey, and often in others like it, outreach is done over the phone or internet. It’s one way that Fryberg says results can become biased, excluding Native communities that may not have access to either.

“Especially when you look at reservations and rural communities that are more isolated, these types of sampling methodologies are less likely to reach those populations,” she says.

Another issue with the AP survey: a vague definition of who is considered “Native.”

“It’s the same issue with a lot of public opinion polls,” Fryberg says. “The questions aren’t culturally sensitive and have a monolithic view of what it means to be Native — we assume that all those who marked ‘yes’ to being Native are the same.”

But, of course, they’re not. Growing up among other Tulalip members, Fryberg saw a diversity in the way Native people related to their identity. For some, she says it was central to their understanding of self; they regularly participated in tribal elections and ceremonies. For others, it wasn’t as central, or they participated in different ways.

“All of these different ways of identifying have consequences for how people think about how they vote, what’s important, what the future should be,” she says. “What we want to do, especially in cases like this, where you’re representing the viewpoint of Native people … [is] to provide some diversity.”

She addressed this in the Indigenous Futures survey by adopting an “acculturation scale” to help break down how Native respondents relate to their identity — basically, how much they participate in Indigenous traditions and other forms of culture, and how that impacts the way they identify.

“We really tried to understand variations in people’s lived experience as Native people,” she says.

Fryberg says that one of the survey’s most significant findings was a simple one: Native people vote, frequently and consistently. It’s not exactly a surprise, she says, but tracking it is a step toward making their political power known to outside political parties. Looking at Arizona and Wisconsin, Fryberg says she wonders if the election results would have changed if the Trump campaign had paid Native communities more attention during his presidency.

“The fact that we get out and vote means you should care about our community, and you should fight for our vote,” she says.

The survey found that, despite reported barriers, Native communities are diligent voters. About 27% of respondents cited barriers to voting, with issues ranging from not receiving an absentee ballot in time to residing long distances from polling centers. Despite that, 77% of respondents reported voting in the last local, state or national election. Almost 10% of respondents said they weren’t old enough or weren’t registered to vote in previous elections. The survey also noted that 80% of respondents viewed candidates’ track records on Native and tribal issues as motivation to vote for them.

That in itself isn’t too surprising, but Fryberg says she was taken aback by the near consensus of distrust. Results from other parts of the survey offer some explanation. Over half said they experienced discrimination based on their Native identity, and 87% said that they didn’t believe other Americans care about their experiences as Indigenous people. Fryberg says a history of government abuse in their communities — including everything from cultural to political suppression — compounds that distrust.

If politicians want to build relationships with Native communities, Fryberg says, they have to understand this distrust first.

“These are issues that are important for our congresspeople to [know],” she says. “They don’t trust you so how are you going to build trust with them?”

A call to action

When the survey was first conceptualized in the spring, Salgado says, the research team had hoped the pandemic would be only a temporary setback. They had all agreed that in-person outreach would be the best method to getting a large sample of respondents.

They quickly realized that wouldn’t be an option as the pandemic drew on. They reached out to Indigenous communities through cultural hubs and community centers instead, focusing on areas with large Native populations, as well as through social media. And with so much evidence indicating a disproportionate impact of the pandemic on Native communities, researchers added a section to the survey to look into it.

The results offer a snapshot of these impacts: Half of the respondents said they couldn’t access coronavirus testing despite having symptoms. Just under half reported that their financial situations worsened during the pandemic. And 36% of the participants said their work hours were cut or that they were laid off since the pandemic began.

These negative impacts worsened among respondents whose annual household is less than $44,999; 39% of respondents fell under that category.

“These families were twice as likely to be impacted, in terms of work hours being cut,” Fryberg says.

To Fryberg’s knowledge, this is the first national study on the impacts of the coronavirus on Native communities. She’s working on another study with the University of Washington that looks further into the pandemic’s effects on Native people, the results of which will be public in January.

There’s urgency there — with data in hand, she says it will be harder for politicians and others in power to overlook Native needs. The results of the survey, Fryberg says, makes it impossible for them to be seen as unimportant.

“These are issues that need to be addressed,” she says. “It’s definitely a call to action.”