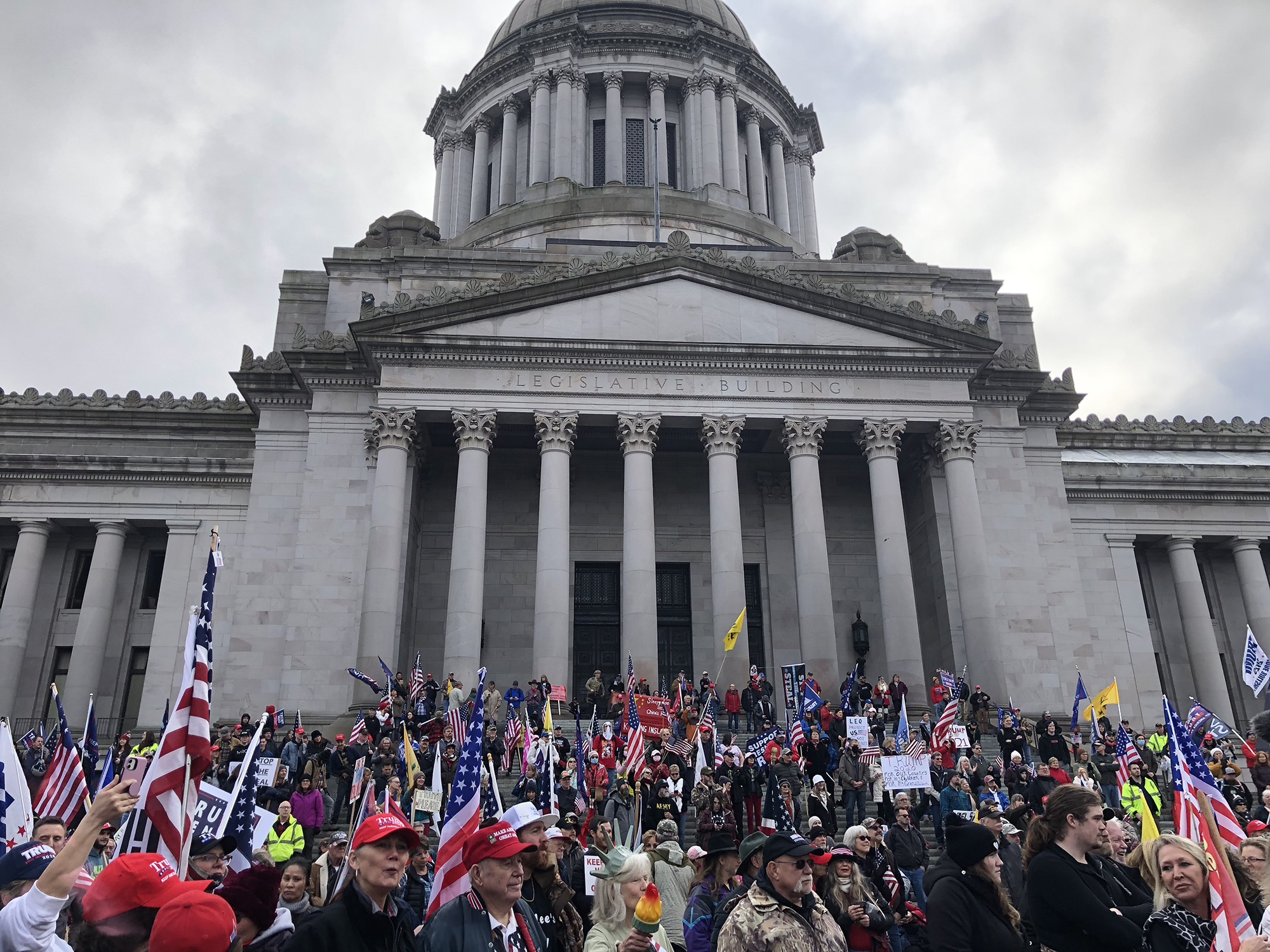 Protesters wave Trump and U.S. flags on the steps of the Washington state Capitol to protest election results, Jan. 6, 2021. (Shauna Sowersby for Crosscut)

Hundreds of armed protesters occupied the steps of the state Capitol on Wednesday, demanding the results of the November election be overturned and threatening violence in this Washington as mobs breached the doors of the U.S. Capitol.

“We cannot allow these criminals to run this country,” Joey Gibson, Patriot Prayer founder, told a crowd of more than 300 after outlining charges of election fraud, which have all been repeatedly refuted by state and federal officials and turned away as unfounded by numerous courts.

Shouts calling for violence against the press and the government peppered the rally, but mostly the crowd was just rowdy.

Many of the protesters, who were carrying Trump and American flags, marched across the campus to the governor’s mansion, banged on the metal fence surrounding the building where Gov. Jay Inslee lives with his wife, yelling “open the gates.” Some got past the gate and continued chanting on the governor’s front lawn, but did not enter the historic building.

A spokesman for the governor said he was in a safe location. In a video address later in the evening, Inslee referred to the storming of the U.S. Capitol as an act "of sedition and intimidation."

"Today was no debate of ideas," the Democratic governor said.

Speaker of the House Laurie Jinkins was inside the Capitol as the protesters stood on the steps of the building, the week before the Legislature was set to convene on Monday. She called what was happening in the other Washington heartbreaking and expressed confidence that the Washington Legislature would be able to get to work as scheduled and in a safe manner.

“I think we’re working well to make sure things stay calm, and hopefully people will exercise their right to protest in a safe way.” said Jinkins, a Tacoma Democrat. “People are entitled to protest; this country was founded on that right. We just need to make sure it’s physically safe.” 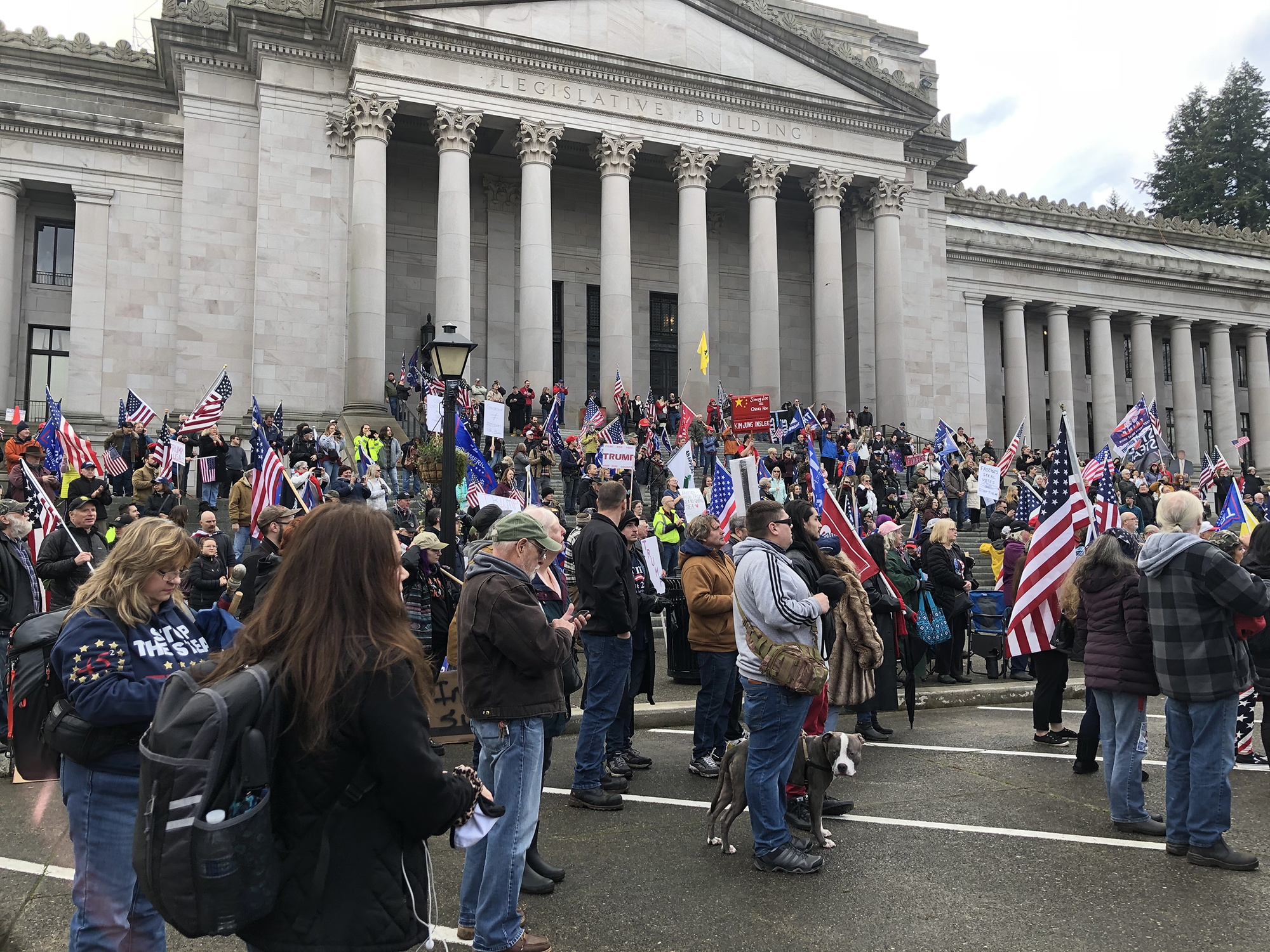 Protesters wave flags on the steps of the Washington state Capitol to protest election results, Jan. 6, 2021. (Shauna Sowersby for Crosscut)

Protesters wave flags on the steps of the Washington state Capitol to protest election results, Jan. 6, 2021. (Shauna Sowersby for Crosscut)

Republican officials in Washington state also condemned the violence at the nation’s Capitol.

State Senate Republican Leader John Braun of Centralia called the actions of the protesters in Washington, D.C. “unacceptable,” and urged protestors in Olympia to be peaceful.

House Republican Leader J.T. Wilcox of Yelm wrote on Twitter: “We can’t let toleration of violence be part of our politics. Cast it out.”

And state Republican Party Chair Caleb Heimlich called the day’s events “unfathomable,” adding, “I never thought I would see something like this in the greatest country in the history of the world.”

“Violence, intimidation and disruption of the business of the People’s House is wholly unacceptable, and it flies in the face of our nation’s foundational values,” Heimlich said in a written statement.

Borrelli claimed there were massive security breaches before the election in Washington state, but the Secretary of State’s Office has said it has seen zero evidence of security breaches of the state’s elections system.

Andy Yong, a pastor who came to the rally to voice his support of President Donald Trump and to open the event with prayer, said he wasn’t worried about his personal safety or violence, although “there’s always a possibility.”

Peggy Hutt, a veteran, said she is a regular participant in rallies in support of gun rights and against election fraud, because she believes in the Constitution and loves her country.

“Everything starts and ends with our election system. If they’re not fair and transparent we will never know if the people who are representing us are actually those who have been elected by the people,” Hutt said.

Washington State Patrol Sgt. Darren Wright said the patrol was monitoring activities of the crowd but hadn’t seen any signs of violence.

"We want to be sure everyone has the opportunity to express their First Amendment rights peacefully,” Wright said. "We can’t predict what people are going to do. We’re prepared for whatever occurs and we’re hopeful that people will stay peaceful and get their opinions expressed peacefully."

State Senate Majority Leader Andy Billig, D-Spokane, called on all elected leaders at all levels and every political affiliation to join him in denouncing Wednesday's actions and supporting a smooth and peaceful transition to the democratically elected new administration.

“We all have the right to protest, but we all also have a responsibility to not cross the line into intimidation or violence. Today at our state capital and in our nation’s capital, we have seen that line crossed. I condemn any violence, intimidation and destruction in the strongest terms possible," Billig said in a statement.

He commended his Republican colleagues who spoke out against the violence.

"I am disappointed, however, that it took violence at the United States Capitol Building for them to finally condemn what has been manifesting for years under this president and in recent weeks through the support of conspiracy theories designed to undermine our democracy," he said.

In Washington state, Republicans have taken action in response to reports of violence before. A little over a year ago, the state's House Republicans kicked Rep. Matt Shea out of their caucus after he was accused of participating in acts of domestic terrorism, although they stopped short of agreeing to expel Shea from the Legislature.

This story has been updated to include additional context about Matt Shea, a Republican lawmaker who was kicked out of the House Republican caucus of Washington's Legislature, and to add a quote from Gov. Jay Inslee.