To build up urban forests, WA cities could get help from the state

A bill sponsored by a forestry veteran would pay for guidance, grant money and other resources to help cities improve their forests. 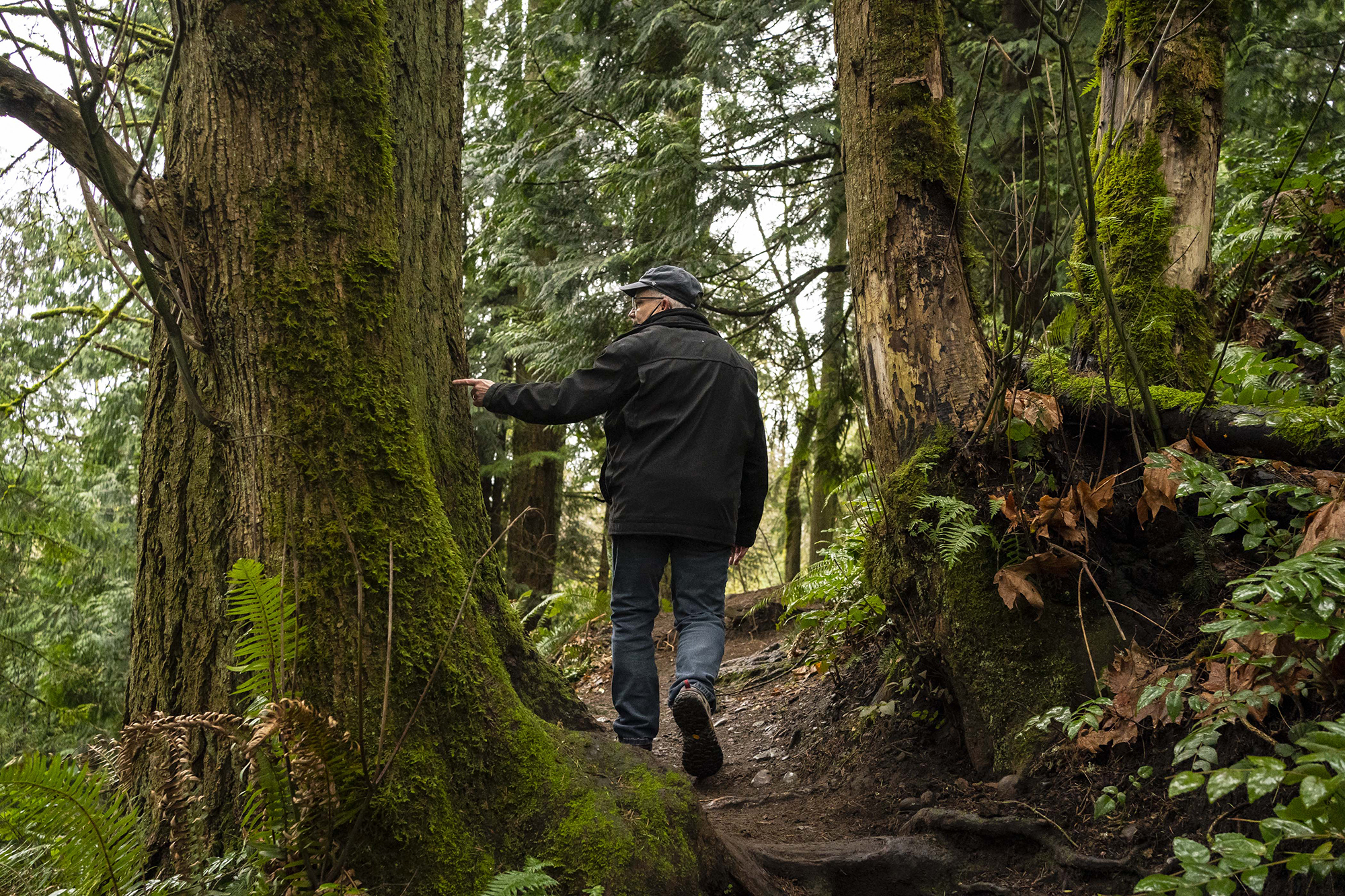 State representative Bill Ramos touches a tree while walking on a trail leading to Tiger Mountain in Issaquah, Washington on January 24, 2021. Ramos has introduced a bill that would energize the state's leading urban forestry initiative, which stalled early in the last recession. (David Ryder for Crosscut)

For Washington’s urban trees, it’s not easy being evergreen.

Broadly, cities aren’t well-equipped to manage the forests already within their borders, or cultivate new ones in underused open space they acquire.

State Rep. Bill Ramos, D-Issaquah, contends that the state’s Department of Natural Resources may have just the tools to help, and has introduced legislation that would enable the department to deliver guidance, grant money and other resources to cities interested in improving urban forests.

Ramos, a 30-year U.S. Forest Service veteran, watched as an Issaquah City Council member as his city tried to figure out how to manage timberland that had been folded into the city parks system. The city lacked the know-how to care for swaths of forest that, untended, would collapse.

“Towns own a lot of green space to help protect their community, but they don’t have the expertise to manage it,” Ramos told InvestigateWest. “They just buy it and it sits there.”

The legislation, House Bill 1216, would revive a decade-old law giving the Department of Natural Resources the authority to provide technical assistance to cities, counties, tribes and other governments. The department, which backs the legislation, would be tasked with performing a statewide assessment of urban tree canopies and running a grant program into which qualifying cities could enroll.

If enacted, the legislation will be among the first pieces of Washington law grown from a yearslong examination of how the state can address long-standing environmental injustices. In a comprehensive report issued late last year, an environmental justice task force found that Washingtonians of color are far more likely than their white counterparts to live in areas with few natural amenities like trees and lots of pollution.

When it comes to trees, the disparity is most obvious from above.

A detailed analysis conducted in Seattle, for example, showed heavy tree cover in neighborhoods north of the Lake Washington Ship Canal and in other largely white, affluent areas elsewhere. In racially mixed southeast Seattle and the Duwamish corridor, trees are sparse.

Ramos’s bill would address that statewide disparity by requiring that half of any funding or assistance provided through the bill goes to neighborhoods identified as highly impacted communities. Most are along the Interstate 5 corridor between Everett and Olympia, though areas of Yakima, the Tri-Cities, Spokane and a smattering of other locations in Eastern Washington would also qualify. 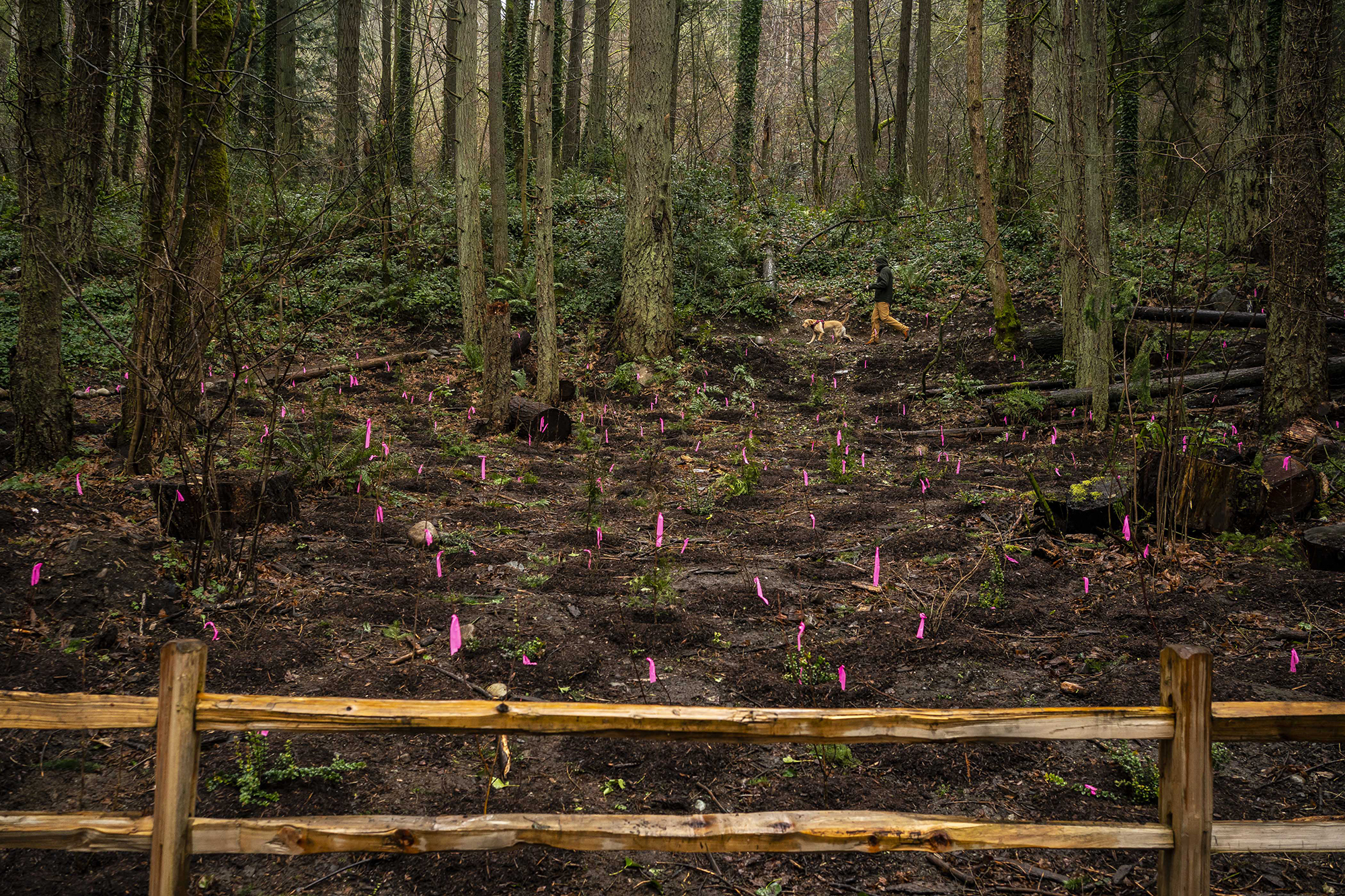 A person walks a dog near newly-planted trees, marked with pink tape, on a trail leading to Tiger Mountain in Issaquah, Washington on January 24, 2021. (David Ryder for Crosscut)

A person walks a dog near newly-planted trees, marked with pink tape, on a trail leading to Tiger Mountain in Issaquah, Washington on January 24, 2021. (David Ryder for Crosscut)

The effort, launched during the 2020 legislative session, has drawn few detractors, and any opposition is expected to center on its cost, which is unclear. Gov. Jay Inslee’s budget proposal included $2.1 million in funding, most of which would go toward analysis and technical support to cities.

The bill’s supporters see it serving several ends, including the governor’s climate agenda.

Urban trees play a minor role in storing or sequestering carbon, capturing about 3.2% of the carbon stored in all U.S. forestland, according to the U.S. Forest Service estimates. But trees can help communities avoid carbon emissions altogether by cutting the energy needed to heat and cool homes.

Tree canopy dramatically reduces the “heat island” effect seen in cities. Heat absorbed by roofs and pavement during the day keeps the cities hot through the night; nighttime air temperatures can be elevated by as much as 22 degrees. Trees also block winter winds that can drain heat from poorly insulated homes.

“You get energy savings and those benefits, but you also get a lot of social and human health benefits,” said Angel Spell, a member of the state Community Forestry Council and assistant director of natural resources with the city of Spokane Parks and Recreation Department.

Urban forests also offer modest positive impacts on airborne particulate and other air pollution, including gases known to have serious health impacts. They improve mental health, as residents are more likely to head outside; one British study even found urban trees correlate with a decrease in antidepressant prescriptions. 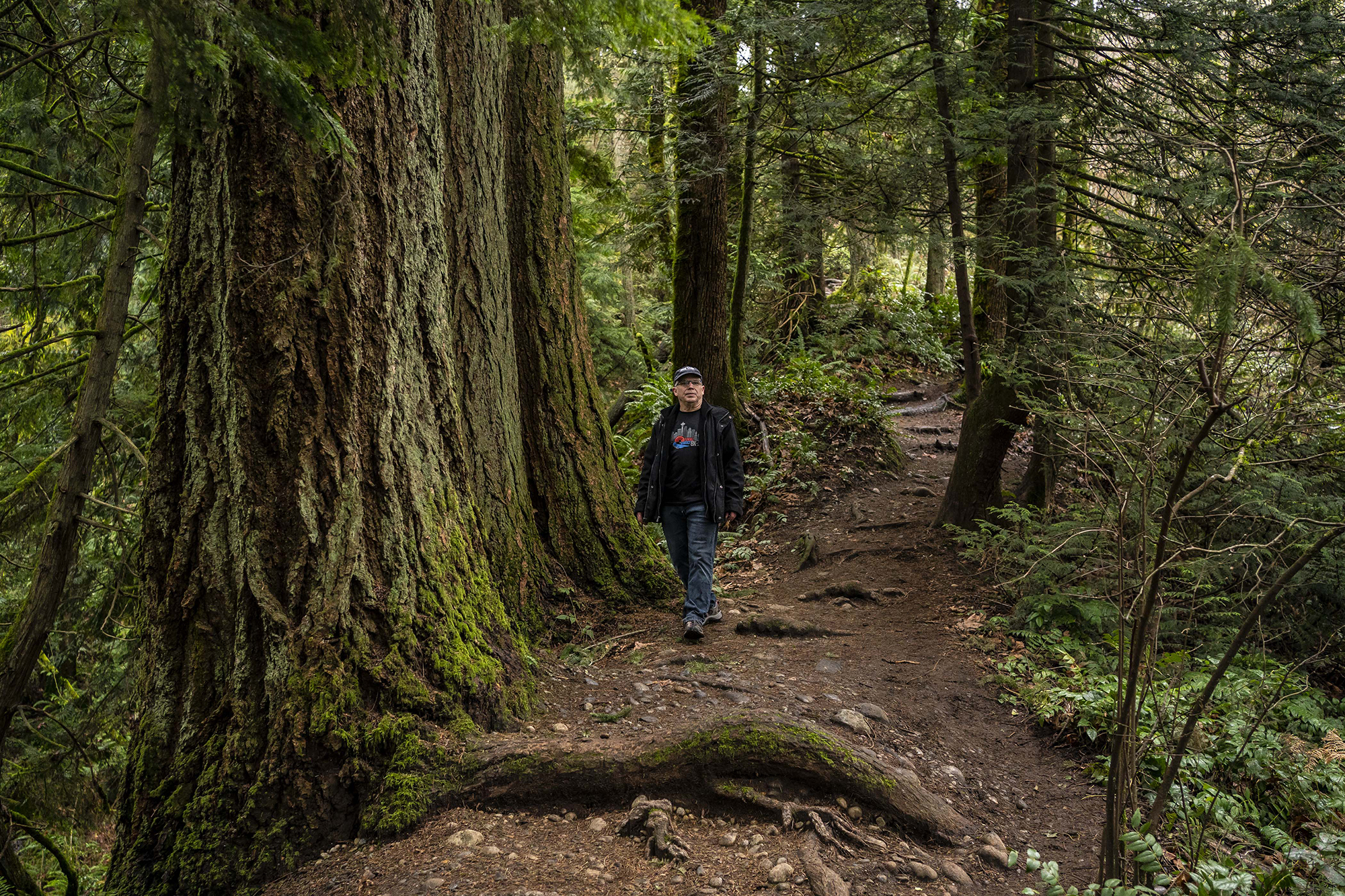 Ramos modeled his state bill after the challenges and lessons he learned while watching the struggles Issaquah city council members faced when trying to manage city forests. He found that cities often lacked resources and the best practices used by the U.S. Forestry Service did not always scale down to smaller city forests. (David Ryder for Crosscut)

Ramos modeled his state bill after the challenges and lessons he learned while watching the struggles Issaquah city council members faced when trying to manage city forests. He found that cities often lacked resources and the best practices used by the U.S. Forestry Service did not always scale down to smaller city forests. (David Ryder for Crosscut)

Climate change is already harming urban trees, and those stresses will become more acute in the years ahead, Spell noted. In most cities, she said, “trees aren’t particularly adapted to this type of extreme and volatile weather events, or these warmer winters and summers.”

The foundation for deeper state involvement in how cities grow their forests was laid with the Evergreen Communities Act, the 2008 law Ramos hopes to invigorate. Thanks largely to budget cuts driven by the Great Recession, the act was never really implemented.

“It’s a bill that was passed and then immediately shelved,” said Jason Callahan of the Washington Forest Protection Association, a timber industry group supporting the legislation.

Washington cities have swelled in the 12 years since the law’s adoption, and are expected to continue to do so.

Pressure to grow vibrant forests didn’t amount to much decades ago, when cities and towns were specks of gray in Western Washington’s sea of emerald. Now, however, urbanization is creeping ever higher into the treed hills surrounding the I-5 corridor.

Cities are expanding with little guidance on how to best shape their urban forests, said Justin Allegro, director of state government relations with The Nature Conservancy’s Washington office.

“We need our cities to welcome more people and grow, and our Puget Sound cities are doing that,” he continued. “But those challenges of sustaining clean air, clean water, quality of life are exacerbated.” 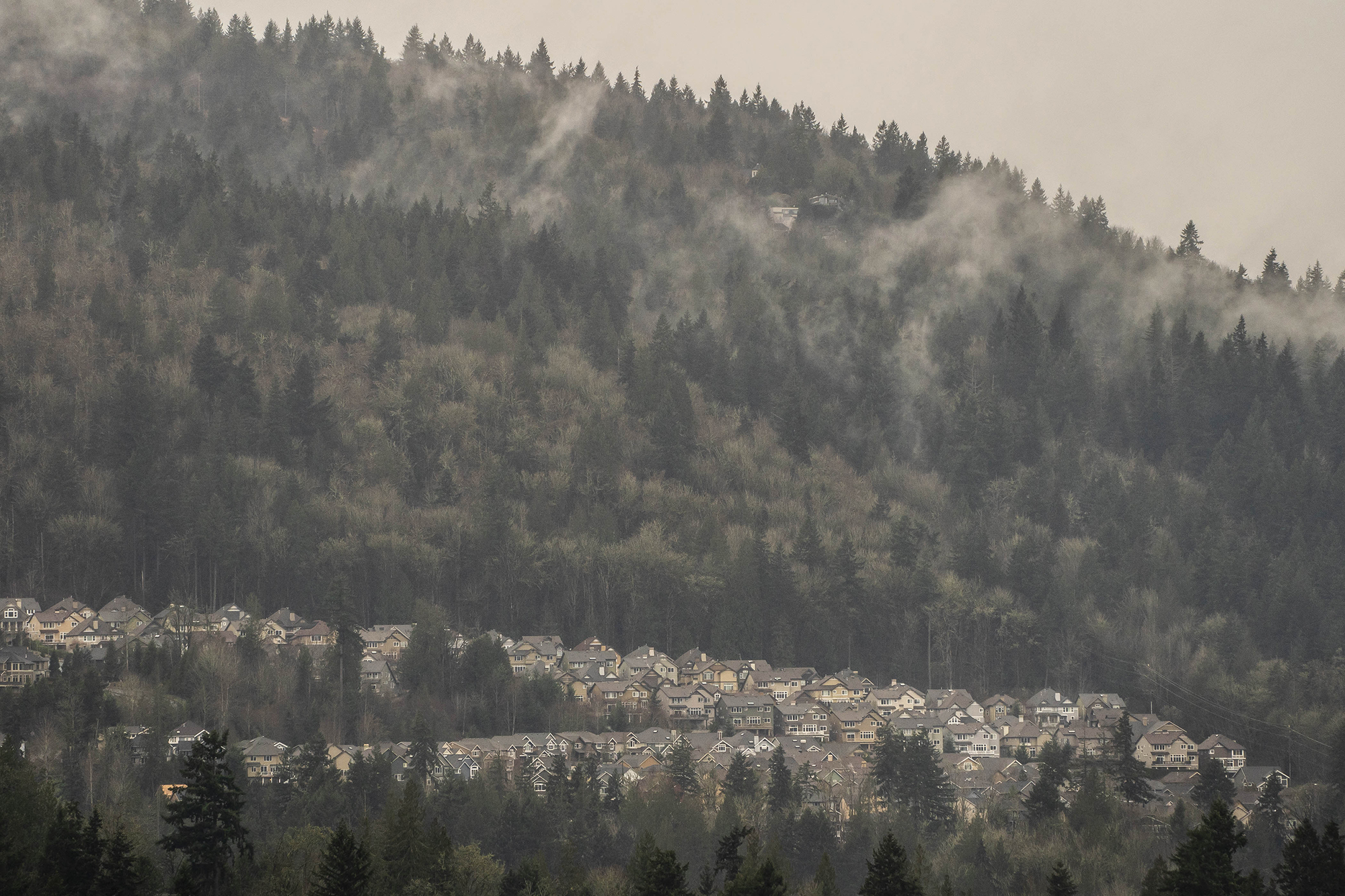 Homes dot a hillside, surrounded by trees, at a development in Issaquah, January 24, 2021. Cities often face a delicate dilemma between the development and preservation of forest land. (David Ryder for Crosscut)

Homes dot a hillside, surrounded by trees, at a development in Issaquah, January 24, 2021. Cities often face a delicate dilemma between the development and preservation of forest land. (David Ryder for Crosscut)

The state is urbanizing rapidly, Thompson said, and the spread of hard surfaces — roads, parking lots, rooftops — is harming the environment and imperiling people’s health. Those impacts are often felt most acutely by people in low-income areas or marginalized neighborhoods.

Urban trees address many of the problems that come with urbanization and past discrimination. But, Thompson said, to “maximize these benefits, cities must invest in the care and management of their trees to the same degree they manage other public assets.”

“Unfortunately, many communities lack the resources to do this,” he said.

In Spokane, city leaders have committed to plans that would nearly double to the amount of tree cover in the city, to 40%. The goal is ambitious, and Spell, who manages the trees on city parkland, said state resources will go a long way toward reaching it.

If enacted, Ramos’s bill would direct the Department of Natural Resources to provide guidance and surplus equipment to municipalities and other governments attempting to better tend their trees.

That specialized assistance, Ramos said, could be invaluable to cities. Ramos recalled an issue that arose while he was on the Issaquah City Council. The city had purchased a 35-acre piece of timberland, only to discover that trees in a 7-acre swath were riddled with root rot.

Looking for a solution, the city tried to draw on the expertise of a Forest Service forester. Asked what the Forest Service would do if the sick trees were on federal land, the forester’s solution was simple — clearcut it — and unworkable for the city.

“It’s a different kind of management when you’re managing 7 acres versus a million acres,” Ramos said. “It’s not an easy situation to solve.”

The legislation requires that at least 50% of the urban forestry effort benefit people living in or within one-quarter mile of areas identified as highest risk on a health disparities map maintained by the state Department of Health. The analysis includes environmental factors as well as socioeconomic information, including race and ethnicity.

The work of the state Environmental Justice Task Force, which was organized through the governor’s office, is evident in Ramos’s bill and is expected to broadly influence legislation during the current session, which kicked off Jan. 11. Many of its recommendations have been collected in legislation introduced by state Sen. Rebecca Saldaña, D-Seattle, that is currently before the Senate Committee on Environment, Energy & Technology.

“I don’t think it’s a surprise that on the heels of the civil rights moment that we witnessed over the last year that the Legislature is responding vigorously with environmental justice as a top priority,” The Nature Conservancy’s Allegro said.

It doesn’t contain a mandate, but cities that want to access grant funding must meet criteria set by the Department of Natural Resources. The department would be tasked with developing those benchmarks, though cities would be required to develop tree care ordinances, inventory their trees and put at least $2 per resident toward urban forestry.

Ramos filed a similar bill during the short 2020 legislative session. It proceeded toward a floor vote and likely passage, but was shelved when the coronavirus pandemic set it.

While acknowledging that the Legislature faces “immense challenges,” Allegro described Ramos’s legislation as “primed and ready to go.”

Ramos, too, sees his bill as touching on several of the highest priority areas for state leaders — climate change and racial justice, among them. Development pressures haven’t let up on the cities, and environmental wrongs aren’t going to right themselves.

“These folks need some help,” Ramos said. “Let’s get them the technical help they need.” 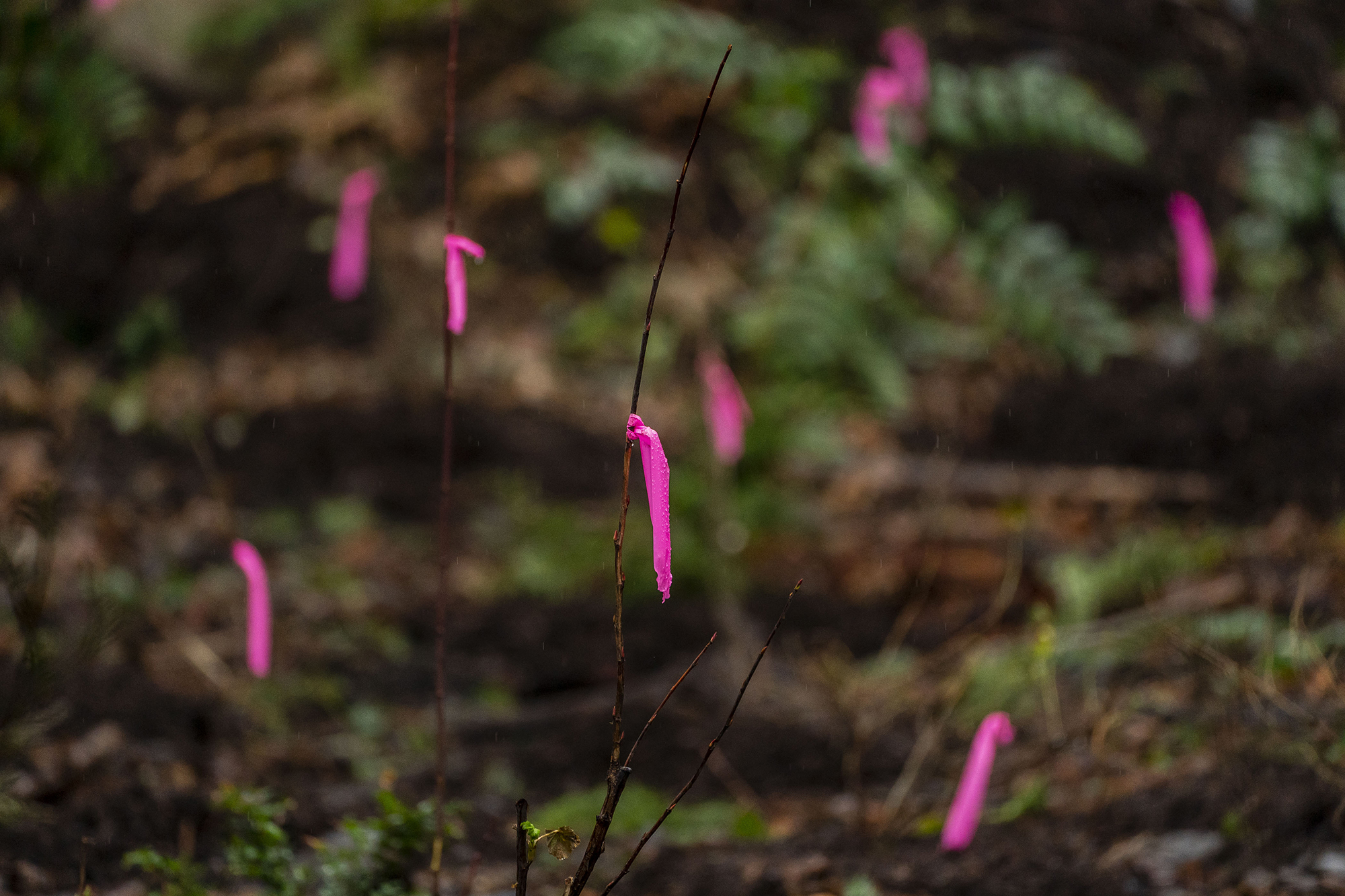 A newly-planted tree, marked with pink tape in Issaquah. (David Ryder for Crosscut)

A newly-planted tree, marked with pink tape in Issaquah. (David Ryder for Crosscut)