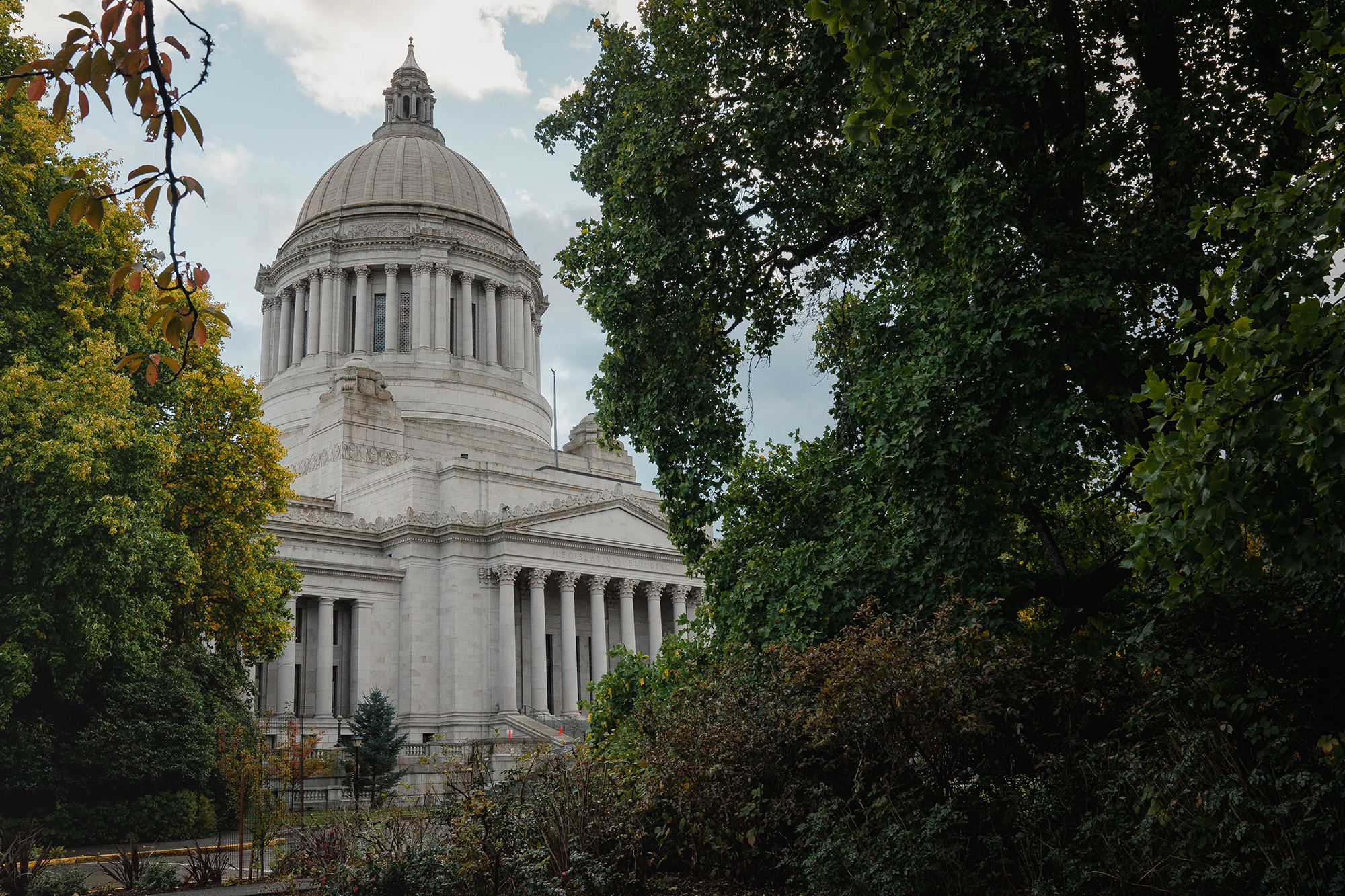 State legislators are considering whether to implement a payroll tax that targets large businesses with highly paid employees, much like a tax recently passed in Seattle. (Jovelle Tamayo for Crosscut)

Seattle went its own way earlier this year by enacting a tax on large businesses with highly paid employees. Now, a proposal at the Washington State Capitol aims to enact a similar corporate payroll tax across the entire state.

There’s a hitch, however: A statewide tax could be difficult to pass if it is layered on top of the one Seattle businesses already are paying.

And, if the statewide payroll tax is going to raise a significant amount of money for state programs, as its supporters hope, lawmakers can’t simply cut Seattle out of the equation.

State Rep. Nicole Macri calls this "the Seattle question" she and her colleagues are grappling with.

“It remains an open question. … What happens with Seattle?” said Macri, a Seattle Democrat who is working on the state payroll tax bill.

Lawmakers will discuss the proposal during a new session of the Legislature that begins Jan. 11.

“Likely, we’d have to carve out Seattle,” Rolfes wrote in a text message.

But because so many of the state’s large businesses with high-salaried employees operate in the city, it’s not clear how much money a big business tax that excludes Seattle could actually raise, she said.

The statewide payroll tax is one idea lawmakers are considering to help plug a hole in the state budget, which has taken a hit due to the COVID-19 pandemic. While the state’s financial picture has improved since June, when state revenue collections were projected to take an $8.8 billion hit through 2023, state lawmakers will still have $3.3 billion less to work with than once projected.

Many Democratic legislators would also like to put more money toward food and rental assistance, subsidized child care, small business relief and other efforts to help people who have struggled during the economic downturn. Based on the state’s latest estimates, new tax revenue could be necessary to make all those things happen.

While similar payroll taxes have been discussed in Olympia before, the passage of Seattle’s tax in July has made the conversation “more complicated than it was previously,” said state Sen. Joe Nguyen, a West Seattle Democrat who is also working on the statewide payroll tax bill.

Although the state has the power to ban, or preempt, local taxes like the one in Seattle, abruptly canceling out the city’s tax could cause problems at a local level, Macri said.

That’s because Seattle officials, too, are banking on money from their new payroll tax to help underwrite the city’s budget, as well as to pay for the city’s response to the COVID-19 pandemic.

The Seattle payroll tax, which took effect Jan. 1, applies to businesses with annual payroll costs of at least $7 million. Businesses pay the tax for each employee who makes $150,000 a year or more. The tax rate is higher for businesses that have at least $1 billion in annual payroll costs or that have employees making $400,000 or above — language that appears tailored to apply to Amazon.

The Seattle tax applies not just to businesses located within Seattle, but to all businesses with employees working in the city.

At the state level, the main proposal under consideration would similarly apply to businesses with annual payroll costs of at least $7 million. But those businesses would be taxed only on the portion of an employee’s salary that exceeds $150,000, and they would be taxed at a much lower rate, according to an early draft of the bill.

While the top tax rate charged under the Seattle plan is 2.4%, the state plan, as currently written, would charge businesses 0.5% at most.

Because of those differences, the statewide plan would raise less money than Seattle’s tax — only about $175 million in its first full year. Seattle’s tax is projected to raise about $200 million per year for the city.

One idea would be for the state to phase out the Seattle tax over time, Macri said. That could ensure businesses wouldn’t be on the hook for paying both taxes permanently, while also letting Seattle keep the revenue it needs to support its budget in the short term.

Another idea is to reduce Seattle’s payroll tax by the amount of the new state payroll tax, so that Seattle businesses end up paying the same amount overall.

Seattle City Councilmember Teresa Mosqueda said that would only work for Seattle, however, if the state gives enough money back to the city to match what the city’s tax would have raised on its own.

“We still want to make sure that the city is kept whole,” said Mosqueda, the lead sponsor of the Seattle tax measure, which she named the “JumpStart” plan.

The text of the city’s JumpStart tax ordinance states that the Seattle City Council intends to “revisit” its payroll tax and consider amendments, should the state or county pass a similar progressive tax measure. But the city ordinance stopped short of promising any specific action if a statewide or regional tax is approved.

Business groups, including the Seattle Metropolitan Chamber of Commerce, are worried about that uncertainty. The Seattle chamber recently sued to try to overturn Seattle’s tax, arguing the city didn’t have the authority to impose such a tax at the local level. The lawsuit, which is still in the courts, hasn’t blocked Seattle’s tax from taking effect.

While the chamber doesn’t question the state’s authority to enact a similar payroll tax, the organization is concerned that enacting a new statewide tax would harm businesses at a time when they are already hurting, said chamber spokesperson Alicia Teel.

“...We would urge legislators to avoid further increasing business costs if possible,” Teel wrote in an email.

Republicans, who are in the minority in both chambers of Washington’s Legislature, will also most likely oppose an attempt to increase taxes on businesses.

“When you go after large businesses, who do you think those large businesses sell to?” Braun asked. He expects companies would pass on the cost of the tax to consumers, as well as to smaller businesses.

Under the current version of the statewide payroll tax bill, about 7,000 businesses across the state would pay the tax directly. Macri said that amounts to roughly 2.5% of business taxpayers in Washington.

Another big hurdle for a new statewide payroll tax is the ongoing unemployment crisis. Because so many people filed for unemployment this year, the trust fund that pays those benefits has been drawn down and needs replenishing. That means businesses’ unemployment insurance premiums — another form of payroll tax — are expected to spike next year, increasing the amount of taxes businesses will already be paying.

Because of that, “we want to be careful about how we structure any new business tax,” wrote Rolfes, the Senate budget writer, via text message.

Still, Rolfes said she is open to the payroll tax bill as the lawmakers work to craft a new two-year budget. State Rep. Noel Frame, the incoming chair of the House Finance Committee, said she intends to give the statewide payroll tax proposal a public hearing.

Democratic leaders are considering other types of taxes as well. Chief among them is a tax on capital gains, which include profits from selling assets such as stocks and bonds.

“It's fair to say there's a lot of pressure to raise taxes on the richest Washingtonians to help get families through this joblessness phase and rebuild the economy, provide childcare and pay for public health,” Rolfes wrote.

Legislators will review tax proposals and other measures during the upcoming session, which is scheduled to last 105 days.