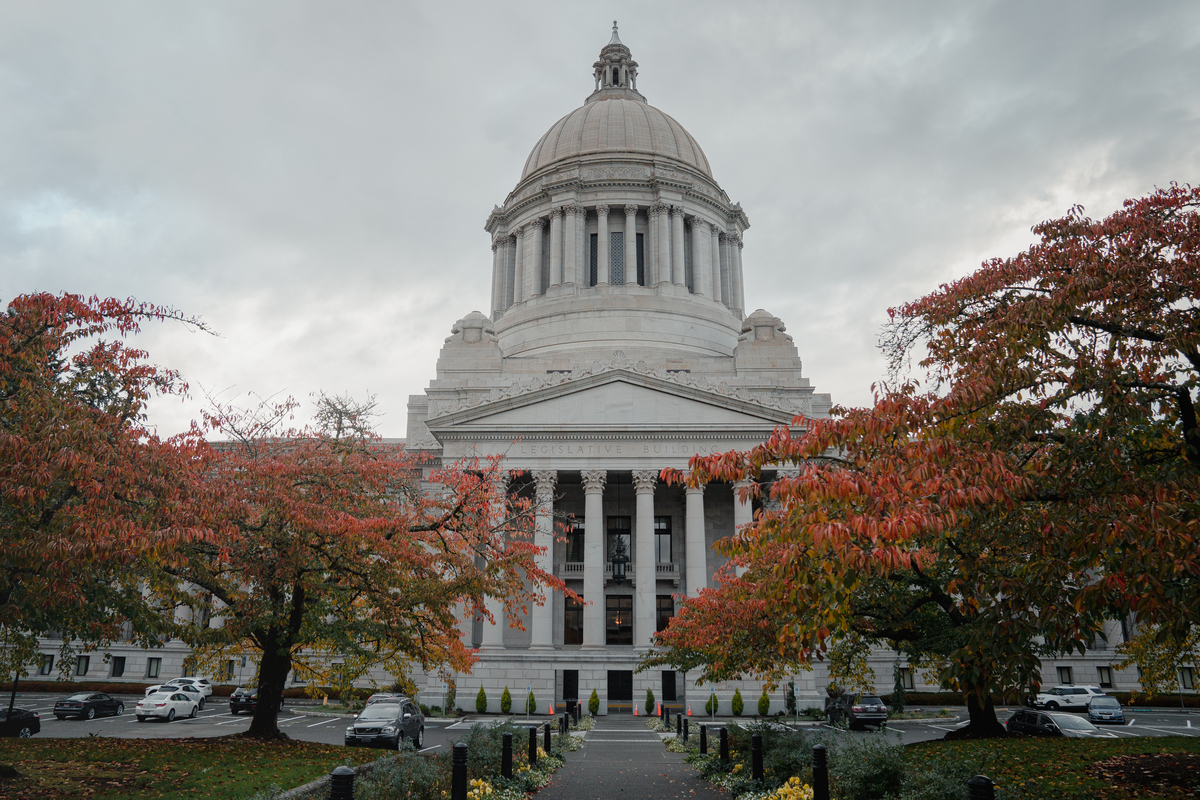 Washington state voters want legislators in Olympia to focus on the pandemic and the economy, according to a new Crosscut/Elway Poll. But they are wary of some of the tax measures lawmakers are considering to pay for that response.

Only 41% of voters surveyed said they support enacting a new tax on capital gains, one of the key measures Democratic leaders in Olympia are considering to help raise more money for state programs.

That’s lower than in past years. In 2019, 44% of Crosscut/Elway Poll respondents said they would “probably” or “definitely” support a version of that tax, which would affect profits from selling assets such as stocks and bonds. In January 2015, 58% of those surveyed said they favored such a tax.

Poll respondents were even less enthused this year about a plan to tax health insurance companies, which Democratic Gov. Jay Inslee suggested last month as part of his 2021 budget proposal.

A plan to enact a statewide cap-and-trade program, which is designed to limit greenhouse gas emissions, was slightly better received. Even so, fewer than half of the voters surveyed — 47% — said they favored the idea.

Inslee is asking state lawmakers to consider these revenue-raising measures during the upcoming legislative session, which begins Monday. 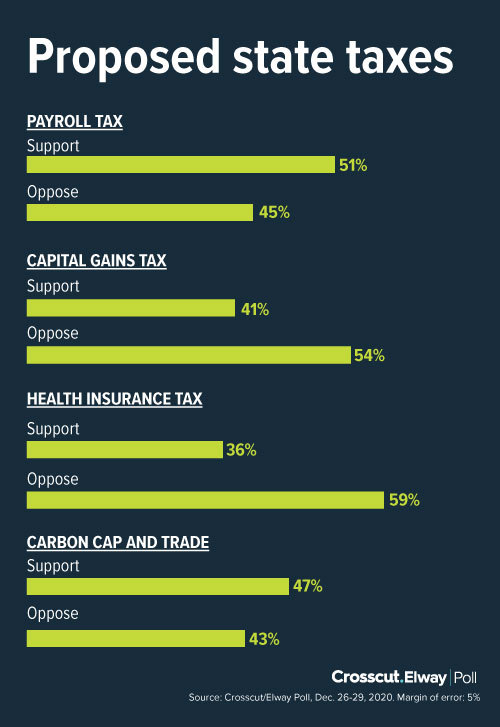 Pollster Stuart Elway said the poll results could indicate “it’s going to be tough sledding for the governor’s agenda” at the state Capitol this year.

“It takes a lot for people to support tax measures,” said Elway, who has polled Washington voters on a monthly or quarterly basis since 1992.

The new Crosscut/Elway Poll of 408 registered voters took place between Dec. 26 and Dec. 29. It has a 5% margin of error at the 95% confidence level, meaning that if the survey had been conducted 100 times, the results would be within 5 percentage points of the results reported here at least 95 times.

Voters who participated in the survey hailed from all parts of the state, with 71% of respondents living outside King County.

The one tax measure that a slim majority of voters appeared to support was a statewide corporate payroll tax. That tax, similar to one recently passed in Seattle, was favored by 51% of survey respondents.

According to a draft version of the state tax bill, companies would be charged based on the number of workers they have making salaries of $150,000 or more. Only businesses with at least $7 million in annual payroll costs would be affected.

For every tax proposal, people who identified as Democrats were more likely to say they were in favor, while Republicans said the opposite. Elway said those results continue a trend of strong partisan polarization that has emerged in recent public opinion polls.

Elway said the corporate payroll tax measure likely fared better than others because “it’s the one people figure they won’t have to pay.”

By contrast, many people seem to think that a capital gains tax could be a precursor to an income tax that could affect more people, Elway said.

Erik Urness, one of the voters surveyed as part of the poll, doesn’t share that concern. He thinks a capital gains tax would “affect only a very rare few … and it is usually the megarich.”

Urness, an independent who identifies as a Democratic socialist, said he would support a corporate payroll tax and a cap-and-trade plan as well. “I think corporations should pay more in taxes, period,” he said. He said there needs to be “some kind of incentive for corporations to do better” when it comes to addressing climate change.

Laura Manigo of Tumwater, however, said she thinks too many of the tax measures being considered this year could end up hurting the middle class. She didn’t favor any of the tax ideas because she thinks businesses will find a way to pass those costs on to consumers.

For instance, she said she suspects a cap-and-trade program that puts a price on carbon emissions would result in people paying more for utilities.

“I know it seems like a small amount, but every little thing it seems like adds up for the middle class,” said Manigo, 53, who identifies as politically independent.

To her, the threshold for when the proposed capital gains tax would kick in is also too low. As proposed, Inslee’s plan would tax capital gains earnings that exceed $25,000 per year for individuals, or above $50,000 for married couples.

While Inslee’s budget office has said the tax would affect only about 2% of Washington taxpayers, Manigo thought it would be too far-reaching.

Voters were more enthusiastic about a few other proposals being considered by Washington’s Legislature.

A clear majority of poll respondents — 69% — favored making it easier to decertify police officers who have bad track records. The idea behind that proposal is to make it harder for an officer accused of misconduct to leave one department and get hired at another, sometimes evading investigation in the process. The issue has received intense scrutiny after last year’s Black Lives Matter protests.

A similar percentage, 63%, supported requiring the producers of gasoline and other fuels to reduce carbon emissions. For the third year in a row, Inslee has proposed a clean fuel standard to make that happen.

Partisan division was evident in the responses to each of those questions. A majority of people who identified as Democrats supported the two police-related measures, while a majority of Republicans did not.

While 91% of Democrats favored the policy requiring fuel producers to cut emissions, only 15% of Republicans did. Those living in rural areas and Eastern Washington also were more likely to oppose the push for cleaner fuels.

Overall, environmental concerns appear to be a lower priority among voters than in years past. Instead, the coronavirus and the economy seem to have eclipsed all other issues in voters’ minds.

In response to an open-ended question about which issues are most important for the Legislature to address in 2021, 52% of respondents said COVID-19, while 31% named economic issues.

The new poll marks only the second time in 30 years that more than half of registered voters surveyed by Elway agreed about the most important statewide issue. The last time was in 2012, when 59% of people said the economy was the state’s most pressing concern.

Last year, 31% of poll respondents named homelessness as the state’s top issue. This year, that number dropped to 12%.