What’s next for the two WA Republicans who voted to impeach Trump?

Observers say the votes to impeach from U.S. Reps. Jaime Herrera Beutler and Dan Newhouse signal a ‘civil war’ playing out within the GOP nationwide. 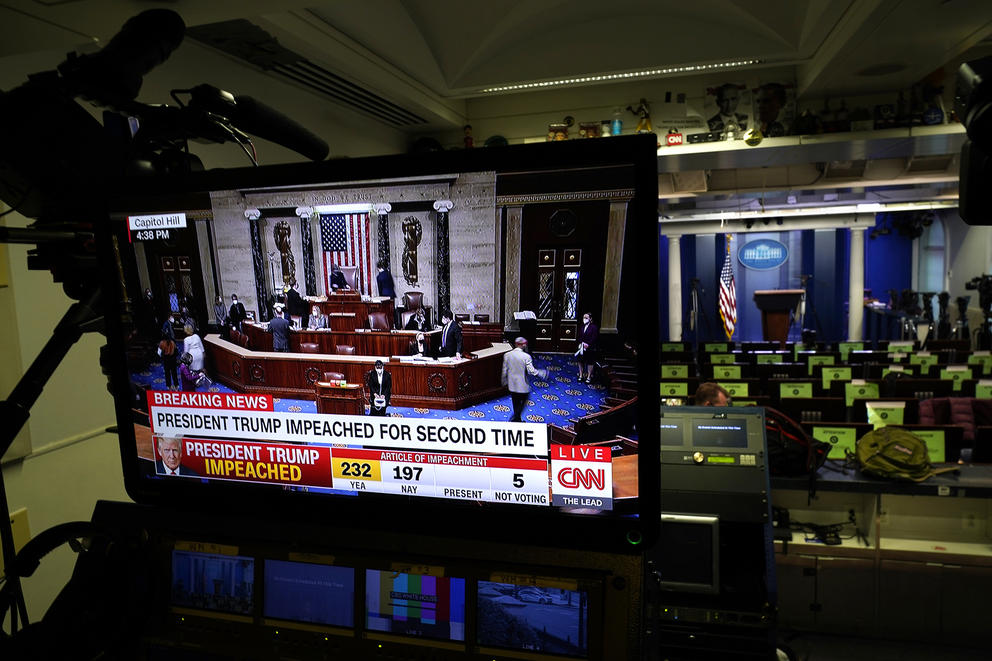 “It’s already underway,” said Brandon Svenson, the chair of the Lewis County Republican Party, who said dozens of people had contacted him between Wednesday and Friday upset with Herrera Beutler’s vote.

Elsewhere in the state, Republican leaders in Central Washington were similarly fuming over U.S. Rep. Dan Newhouse’s decision to support impeachment of the outgoing president.

Debra Manjarrez, the chair of the Yakima County Republican Central Committee, said Newhouse’s vote on impeachment would “absolutely” fuel a primary challenge to the Republican incumbent congressman in 2022.

Newhouse, R-Sunnyside, and Herrera Beutler, R-Battle Ground, were among only 10 GOP House members to vote for impeaching Trump on Wednesday. Both said they saw ample evidence that the president helped incite the riot that overtook the U.S. Capitol on Jan. 6.

Shortly beforehand, Trump had encouraged his supporters to march to the Capitol, where members of Congress were certifying Joe Biden’s electoral college victory, telling the crowd at a rally, “If you don’t fight like hell, you’re not going to have a country anymore.”

On Friday, Herrera Beutler posted a thread on Twitter outlining all of the president’s actions that she thought made him culpable for the violent insurrection at the Capitol. “Here are the indisputable and publicly available facts,” she tweeted, listing multiple statements from the president in which he encouraged his supporters to fight the certification of the November election, which he lost.

When speaking in favor of impeachment on the House floor last Wednesday, Herrera Beutler said, “I am not afraid of losing my job, but I am afraid that my country will fail.” 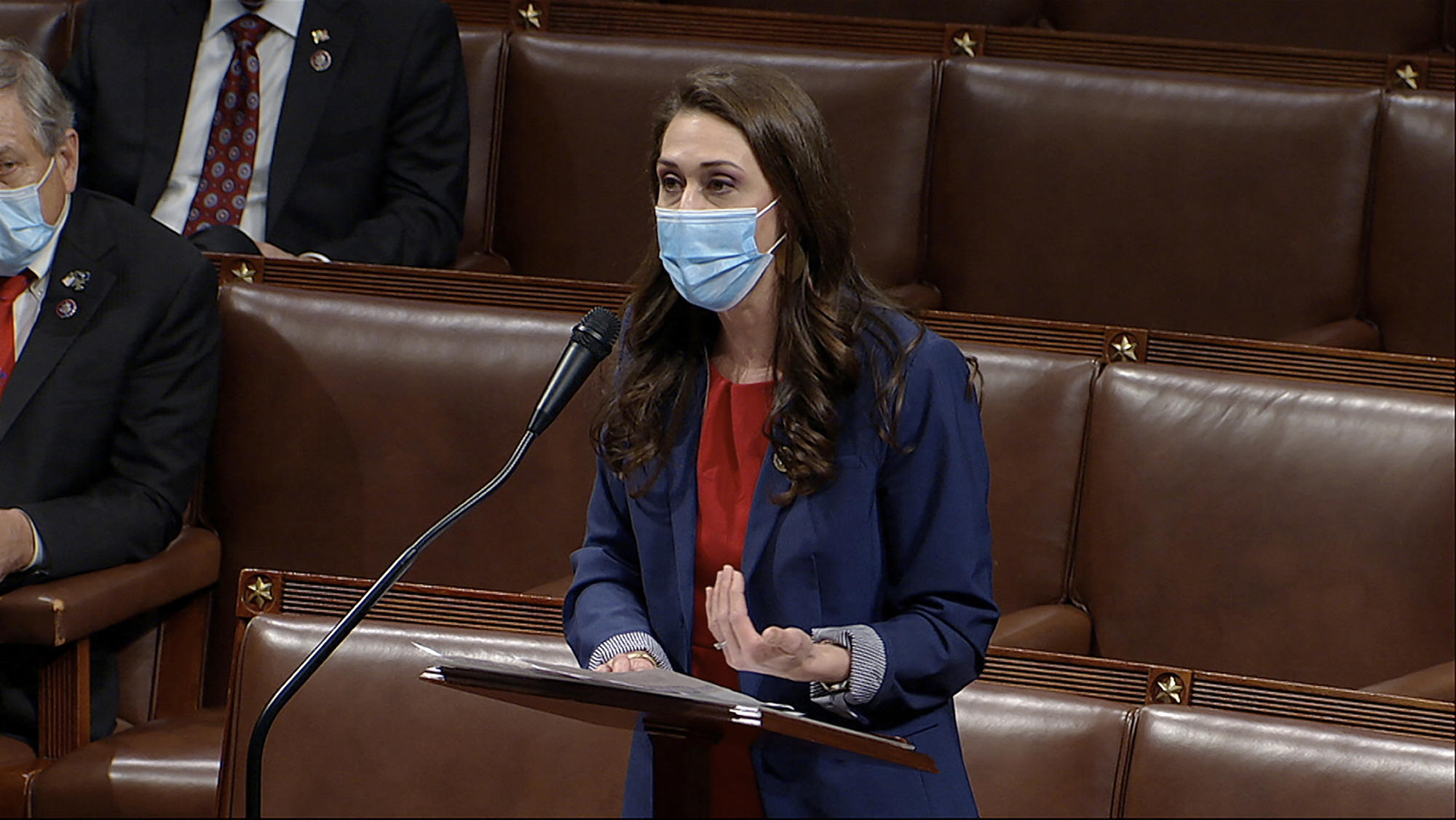 Rep. Jaime Herrera Beutler speaks as the House debates the objection to confirm the Electoral College vote from Pennsylvania, at the U.S. Capitol. An armed attack on the Capitol by supporters of President Trump temporarily delayed the debate. During impeachment proceedings for Trump over inciting the riot at the Capitol, Herrera Beutler came out in favor of impeaching Trump on the charge of "incitement of insurrection." (House Television/AP)

Rep. Jaime Herrera Beutler speaks as the House debates the objection to confirm the Electoral College vote from Pennsylvania, at the U.S. Capitol. An armed attack on the Capitol by supporters of President Trump temporarily delayed the debate. During impeachment proceedings for Trump over inciting the riot at the Capitol, Herrera Beutler came out in favor of impeaching Trump on the charge of "incitement of insurrection." (House Television/AP)

For many Republicans in Herrera Beutler's district, however, that wasn’t a good enough explanation for voting to impeach a sitting Republican president. The vast majority of Republicans in the U.S. House — 197 of them — voted against impeachment last week.

“People are calling her a turncoat, a RINO,” said Christy Tseu, the chairwoman of the Cowlitz County Republican Party, referring to the label: Republican in name only. “She has divided the party and I think she committed political suicide — unless she announced she is going to be a Democrat.”

On Saturday, the Washington State Republican Party approved a resolution condemning Trump's impeachment, calling it "rushed" and a "political spectacle." Party officials expressed "particular disappointment" in the actions of Newhouse and Herrera Beutler.

Others believe history will judge Herrera Beutler and Newhouse’s votes much differently.

Cornell Clayton, the director of the Thomas S. Foley Institute for Public Policy and Public Service at Washington State University, said it’s easier for politicians to defend a vote they made based on principle, as opposed to one where they changed their position to match the political winds.

“I do think this was one of those where you see these representatives taking clear, principled positions that are heartfelt,” Clayton said.

He contrasted their actions with those of U.S. Rep. Cathy McMorris Rodgers, the Republican from Spokane, who voted against impeachment based on what Clayton called “a technicality.”

In a written statement, McMorris Rodgers said she did not believe the president’s words “constitute an incitement of violence as laid out in Supreme Court precedent.”

“To split legal hairs misses the point,” said Clayton, who said the definition of impeachable “high crimes and misdemeanors” is different than the standard for criminal incitement.

Before voting for impeachment, Newhouse gave a speech on the House floor in which he characterized Trump’s behavior as a violation of his oath of office and abdication of duty. When confronted with a domestic threat in the form of a mob that invaded the Capitol, Newhouse said, the president “did nothing to stop it.” 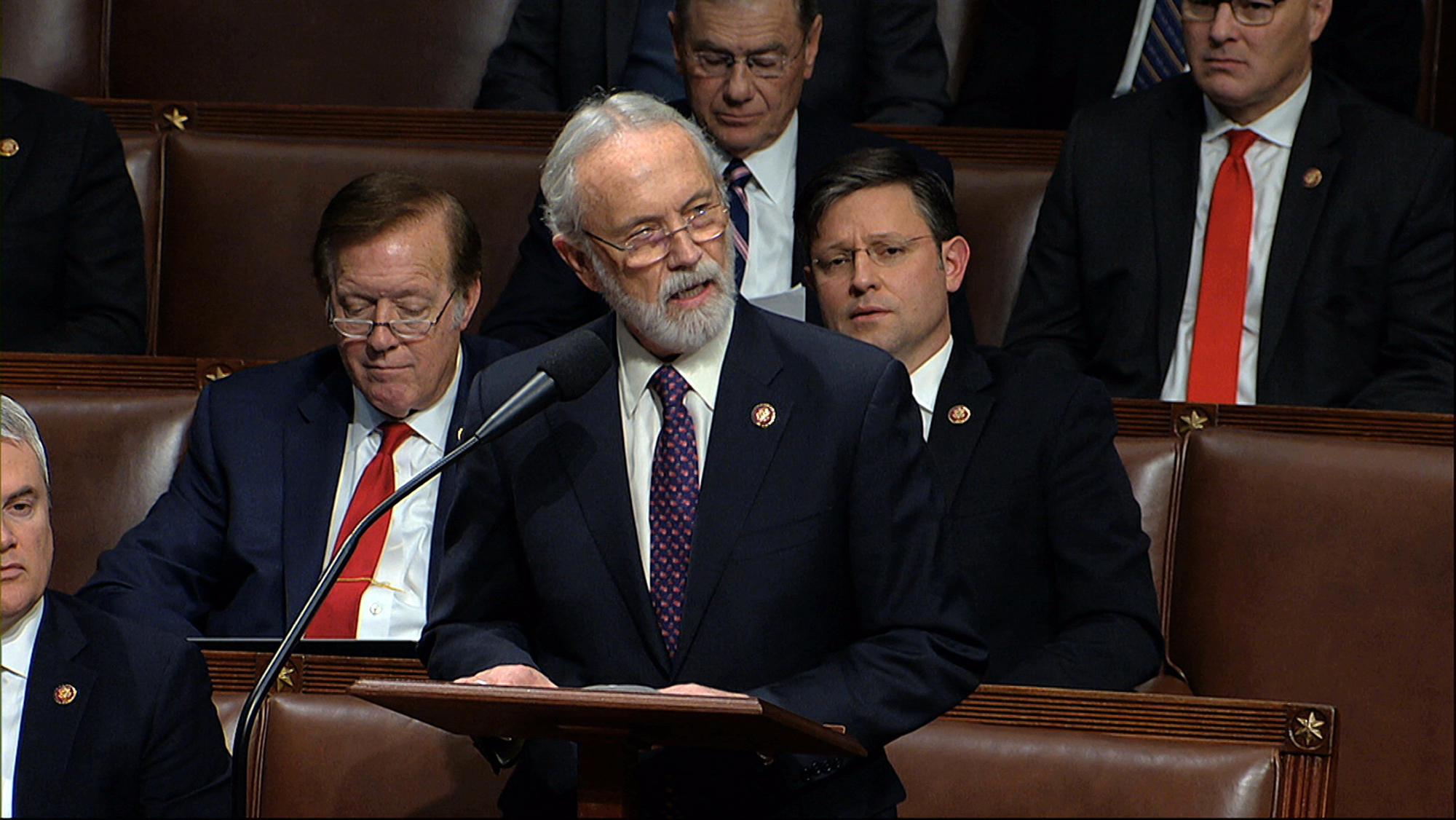 Rep. Dan Newhouse broke ranks with Republicans to vote for impeachment against President Trump for Trump's role in inciting a violent mob to attack the U.S. Capitol. (House Television/AP)

Rep. Dan Newhouse broke ranks with Republicans to vote for impeachment against President Trump for Trump's role in inciting a violent mob to attack the U.S. Capitol. (House Television/AP)

Clayton said he suspects that, in the long run, Newhouse and Herrera Beutler’s votes on impeachment are “going to work out well for them.”

Some experts think Washington’s top-two primary system made it easier for Herrera Beutler and Newhouse to vote their conscience, potentially blunting some of the political repercussions they might face in next year’s election. In Washington state, the top two vote-getters in the primary move on to the general election, no matter their party affiliation.

Dave Wasserman, the House editor of the nonpartisan Cook Political Report, wrote on Twitter shortly before the impeachment vote that if more states had top-two primary systems, he suspects “the tally of pro-impeachment R’s would be double whatever it ends up being today.”

Alex Hays, a Republican political consultant from Tacoma, said because the top-two primary doesn’t require voters to register as part of one party or another, it effectively “lets less partisan and nonpartisan voters vote.”

“And in that population, impeachment will be popular,” said Hays, noting that the top-two primary lets voters pick “whoever they want,” regardless of party, and can serve as a moderating force in politics.

For instance, in Newhouse’s district, where the top-two primary has yielded Republican versus Republican matchups in the past, the roughly 40% of voters who are Democrats are more likely to choose Newhouse over a challenger further to the right, Hays said.

“If you are the minority party in a single party district, your consolation prize is you get to moderate your elected official,” Hays said.

That doesn’t erase the furor that Herrera Beutler and Newhouse are facing now, however.

“That anger is part of why these votes were courageous,” Hays said.

Tina Podlodowski, the chair of the Washington State Democrats, said that may give the two Republican lawmakers too much credit. She called Herrera Beutler and Newhouse’s votes “the bare minimum they needed to do for decency and democracy.”

“It’s not courageous to stand up for the Constitution when you have taken an oath to support the Constitution,” Podlodowski said Friday. “It’s what we expect our representatives to do.”

Still, a split is evident in the Republican Party, with impeachment just the latest example of the competing factions. Clayton, the WSU professor, went as far as to call it a “civil war.”

“The main dividing lines seem to be between insurgents and institutionalists,” said Eric McGhee, a senior fellow at the Public Policy Institute of California. He sees the 10 Republicans who voted for impeachment as part of the “institutionalist” wing, who want to preserve “the norms and traditions of governing,” as opposed to embracing the populism of Trump and many of his supporters.

He said that dynamic was likely the bigger influence on Herrera Beutler and Newhouse’s vote, rather than the top-two primary. California similarly has a top-two primary system, and only one Republican from the state voted to impeach Trump.

Randy Pepple, a Republican political consultant based in King County, said how Herrera Beutler and Newhouse perform in their next election will most likely depend on how Trump’s legacy fares over the coming years.

His prediction? “I think in two years time it will be clear that Donald Trump was unfit for office,” Pepple said.

Because of that, Pepple predicted, Herrera Beutler and Newhouse’s votes “will look better and better as time goes on.”

How punishing people for 'doxxing' could prove tricky for WA lawmakers