Before statehood, mob violence and labor suppression raised serious questions about who had the right to maintain public order. 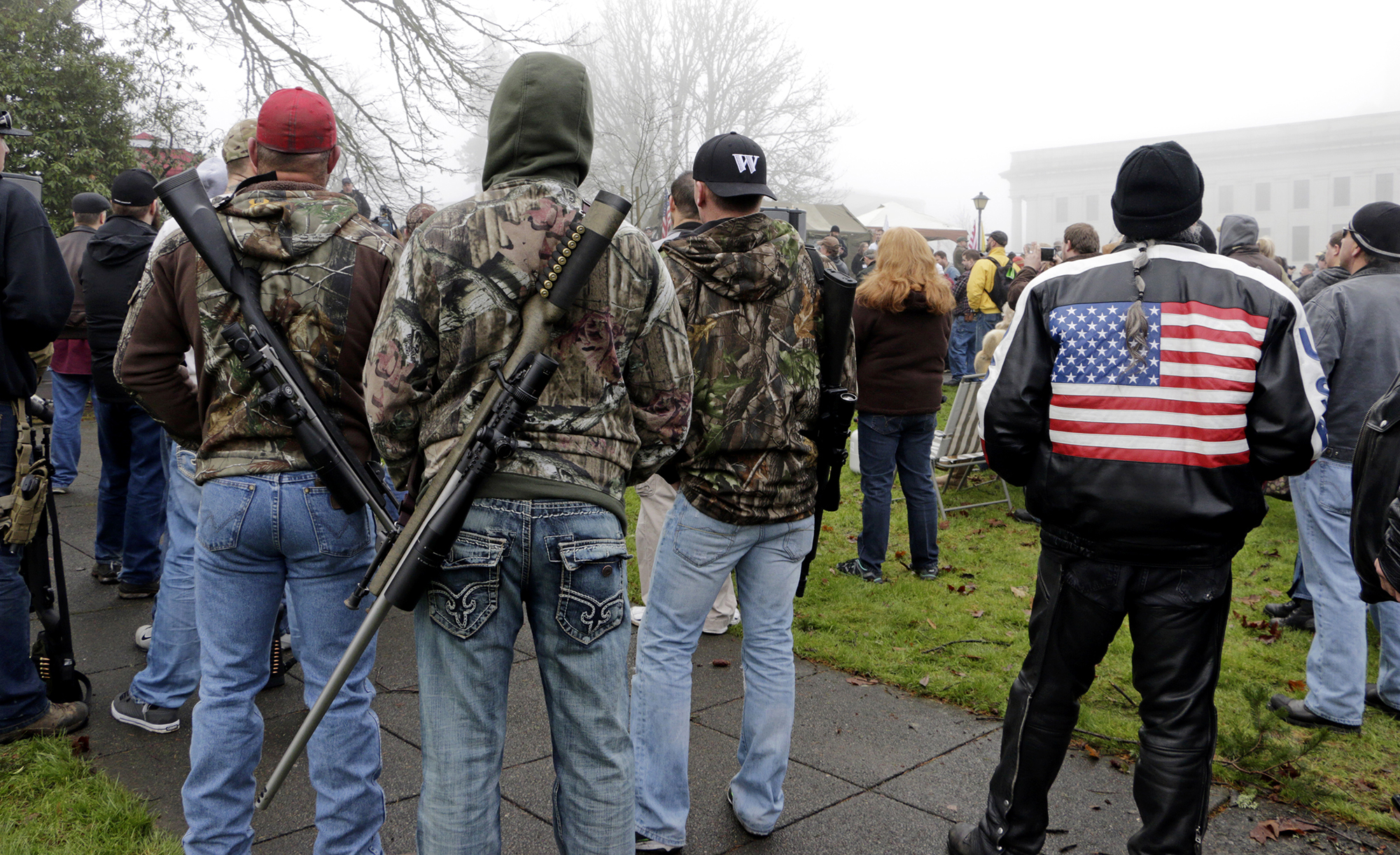 Demonstrators with rifles slung across their backs attend a rally by gun-rights advocates in 2014, in Olympia, Wash. The armed protest drew members of the Three Percenters, a militia movement and paramilitary group described as having right-libertarian and far-right ideology. (Rachel La Corte/AP)

In 1888, a confrontation in the coal-mining town of Roslyn, in Kittitas County, just east of the Cascade crest, helped shape the Washington state constitution. The incident, a small chapter in a longer narrative of regional tumult, involved union laborers, strikebreakers, hired railroad guards armed with weapons and violent clashes over race.

All 50 states, in some way or another, ban private armies, militias or paramilitary forces within their borders. Washington state’s constitution asserts that any militia must be in “strict subordination to civil power,” meaning the state or the federal government. It also affirms a citizen's right to bear arms for defense of self or state, but cautions that those rights should not be construed as “authorizing individuals or corporations to organize, maintain or employ an armed body of men.”

In recent years, armed bodies of men have become a regular spectacle at protest sites across the country. Men with semi-automatic weapons draped over their shoulders and pistols packed on their waists have appeared at far-right freedom rallies in Olympia, anti-racist protests in Portland and, on Jan. 6, at the nation’s Capitol, where a mob of pro-Trump supporters stormed the halls of Congress. The proliferation of armed demonstrators has alarmed many observers, and now some Washington state legislators are responding. During the current legislative session, they hope to strengthen rules and enforcement around guns, protests and paramilitary groups, which in some cases — when people brandish weapons with an intent to intimidate, for example — appear to be in violation of state law.

When the Washington Territory was on the brink of statehood, serious concerns were raised by events ranging from mob violence to the armed suppression of workers, and about who had the right to carry arms to maintain order. How did the original constitutional prohibition come about?

Railroads and racist violence in the Pacific Northwest

After the Civil War, labor-related violence became commonplace. The nation’s industry and railroads were rapidly expanding, bringing new jobs and ruthless competition. Large workforces were exploited in the process. Battles between mine owners and the so-called Molly Maguires in Pennsylvania’s coal fields during the 1870s took on aspects of a major armed conflict. Clashes continued throughout the next two decades, moving westward with the railroads.

When the new rail lines finally connected the Northwest to the outside world, laborers were in high demand — and they welcomed the call. The worker population in the region soared during the 1880s, bringing immigrants and Black Americans to the region. The nation’s first real union, the Knights of Labor, welcomed, on paper at least, people of all races, but their branches and leaders in the Northwest fiercely resisted integration and took a major role in fomenting hatred of Chinese workers, as well as immigrants from southern and eastern Europe, who were not considered “white.”

Acts of racist violence followed. In 1885, a Knights of Labor riot led to the massacre of 28 Chinese miners in Rock Springs, Wyoming. The murder of three hop workers in Squak Valley (Issaquah) that same year and the 1887 slaughter of 34 Chinese prospectors in Hells Canyon’s Deep Creek, in Oregon, signaled an escalation of racism and xenophobia across the region.

Knights of Labor organizers played key roles in trying to forcibly eject all Chinese laborers from Seattle and Tacoma. In Seattle, they helped ignite a riot in which the U.S. Army was called in to quell the violence. Martial law was declared, and U.S. troops patrolled the streets for 10 days. In Tacoma, an angry mob expelled the Chinese and burned their Chinatown to the ground. The city’s white leadership celebrated the act of racial terrorism while the press claimed the violence — which it deemed the “Tacoma method” — was a model for other cities to follow.

The Knights of Labor represented a broad coalition of workers. The organization supported better working conditions, increased safety and more regulation of their bosses. But the divisions within were significant. Many Knights were members of a Marxist subgroup of agitators, precursors to the Industrial Workers of the World radicals. But in the Northwest, they and the Knight membership in general demanded that any challenge to the supremacy of white labor be rejected. Meanwhile, the railroad bosses used racial division to gain leverage over the workers. They employed workers of color to work longer hours for less pay as a means of breaking strikes and driving down labor costs, essentially weaponizing men who had few, if any, other employment prospects.

The railroads and mining companies fought tooth and nail to ward off the demands of the labor movement. In some cases this meant hiring private guards from the Pinkerton detective agency — a national independent police force — to provide a vast array of services. So-called “cinder dicks,” a term for rail police, were used to spy for owners, recruit scab workers, infiltrate and undermine unions, instigate violence and guard private property against pro-union vandals with what amounted to mercenary armies. It has been estimated that, in the late 19th century, there were more heavily armed men serving in these private security forces than there were troops in the U.S. Army.

In the Northwest, a former Pinkerton named M.C. Sullivan ran the regional operations of a competitor called Thiel’s Detective Service. A bull-necked warrior likened to a pugilist, Sullivan had been involved in protecting Chinese railroad workers during the Tacoma expulsion efforts. He also engaged in other detective duties, including bounty hunting and chasing bad guys; before coming to the Northwest, it was said he helped hunt down Jesse James, one of American history's most notorious outlaws.

In 1888, Sullivan arrived in Roslyn by Northern Pacific train from Pasco. With him traveled approximately 60 armed and uniformed men guarding a roughly equal number of Black workers. Recruited from the East by the Black businessman James Shepperson, the coal miners came to eastern Washington to work at Mine No. 3, where a Knight-led strike had stopped work. The goal was to have the Black miners break the strike by working longer for less at a new mine.

Sullivan, a Union army veteran, and his men arrived amid a tense atmosphere. They began to build defensive fortifications and erect barbed wire fencing around the mining camp where his “guards” and the Black workers lived and worked. Sullivan’s men, uniformed and said to be armed with Winchester rifles and revolvers, reportedly operated the tent encampment in a military style — in other words, as an occupying military force in the pay of the mine and railroad.

In labor disputes during the era, business owners often expected local police or sheriffs, or militias, to back them up. This was not always possible or desirable, and many questioned whether public law enforcement should be at the beck and call of mine owners who were exploiting their workers. Still, in many cases, local police were in bed with the owners and did their bidding. But that did not occur here: The Kittitas County sheriff eventually arrested Sullivan and his men for falsely claiming to be deputized, a charge they denied.

The territorial governor at the time, Democrat Eugene Semple, asserted that no one could authorize military force but the governor, and that territorial militia or federal forces should intervene only in cases of extreme violence. Guns, he argued, should not be accountable to a private payroll. He was sympathetic to the Knights of Labor and deemed Sullivan’s force in Roslyn a “serious menace.”

According to historian Alan Hynding, who has written about the coal troubles of the 1880s, Semple concluded that such groups were nothing more than “organized bodies of ruffians, offering for hire to become instruments of the rich and strong for the oppression of the poor and weak.”

Major violence never broke out in Roslyn. At one point a white mine manager was kidnapped, allegedly by the strikers, and tied to railroad tracks, but ultimately rescued. The Sullivan men were eventually released from custody, and remained in Roslyn until the strike was broken. The Knights went back to work at mines No. 1 and 2 while the Black miners were left to dig at No. 3.

Some 300 additional Black miners joined them within the next year, according to Blackpast.org, and many brought their families. Supporters of the Knights complained that the Black workers represented “slave labor,” a charge that served a dual purpose to stigmatize them as unworthy and ignorant, but also to critique their exploitation by the mine bosses. Eventually they worked side by side with them, despite ongoing disgruntlement. “The introduction of colored labor in [Roslyn’s] Mine No. 3 is still rankling in the white miners’ breasts, and quiet will never be of long duration while they are there,” reported the Seattle Post-Intelligencer in early 1890, reflecting the views of white miners.

'The viciousness' of hired guns

Semple’s frustration with the presence of armed ruffians caused him to ask the territorial legislature to pass a law banning private armies. The legislature demurred. However, as the future state’s constitution was being drafted in 1889 — the last step to win final congressional approval for statehood — a King County Republican legislator named John R. Kinnear, a member of the constitution’s drafting committee, picked up the cause and proposed the ban. Political sentiment was drifting in a decidedly populist direction and the constitution’s authors sought opportunities to check corporate power and influence. (The constitution, for example, still carries a provision forbidding legislators from receiving free or discounted rail tickets.)

“Probably no original clause introduced for the constitution is of more importance and more in accord with the strict democratic principles than that introduced by Mr. Kinnear, prohibiting the importation of armed bodies of men into the state for the purpose of keeping order,” wrote historian Lebbeus J. Knapp, in a 1913 story for Washington Historical Quarterly. Knapp summarized the gist of agreement on the provision, writing, “The viciousness” of hired guns “… was too plain for argument. It was shown that the state, and state alone, should protect its citizens in life and property in the time of disturbance and riot….”

Such dangers are not limited to hired guns or corporate goon squads, or protesters on the right or left. It includes private groups of citizens acting as militias. So, when armed and organized protesters rally in Olympia or march in our streets, many could well be in violation of Washington's constitution and the letter of the law — dangers recognized and warned against at the birth of our state.

Correction: Because of an editing error, an earlier version of this article claimed that armed men have been seen at recent demonstrations carrying automatic weapons. They are semi-automatic weapons.