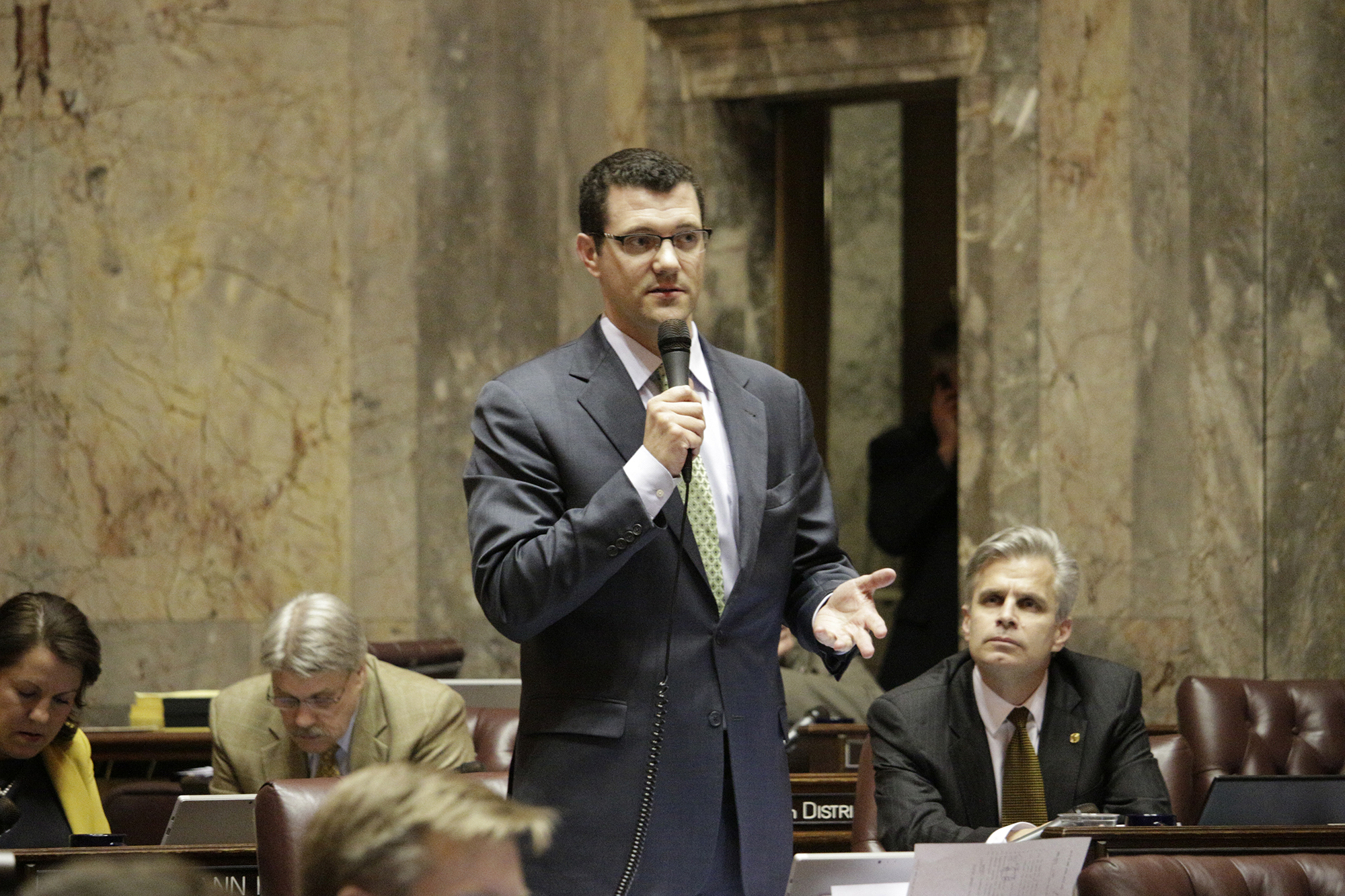 Republican Sen. Joe Fain speaks during a 2015 debate on amendments to the Senate budget proposal, in Olympia. Fain was recently appointed to the Washington State Redistricting Commission, a body tasked with redrawing political boundaries that will be in place for the next 10 years. The National Women's Political Caucus and other groups have produced a letter saying Fain is unfit to serve. (Rachel La Corte/AP)

Groups representing women and sexual assault survivors are denouncing the appointment of former state Sen. Joe Fain to the state redistricting commission, a body that will shape Washington state politics for the next decade.

Fain’s accuser, former Seattle city official Candace Faber, said Fain raped her in 2007 in a hotel room in Washington, D.C., the night she graduated from a Georgetown University master's degree program. Fain has denied the allegation, which was never investigated by authorities or the state Senate.

The National Women’s Political Caucus of Washington released an open letter Monday that said, in light of the rape accusation, Fain “never should have been appointed” to the Washington State Redistricting Commission, which is in charge of redrawing the boundaries of the state’s congressional and legislative districts.

Last month, state Senate Republicans chose Fain, their former colleague, to serve as one of the commission’s four voting members.

"We believe Fain should resign from the Commission until a proper investigation of these serious charges has occurred," reads part of the letter posted Monday. The letter also calls for the redistricting commission to adopt a code of conduct "to ensure a safe and respectful environment for the public, staff, and Commissioners."

On Tuesday, the two Democrats who serve on the redistricting commission, April Sims and Brady Walkinshaw, said they also think it would be best if Fain resigned.

Fain, now the president and CEO of the Bellevue Chamber of Commerce, did not respond to messages seeking comment on Tuesday.

The letter posted Monday was co-signed by Susan Marks, the executive director of the Washington Coalition of Sexual Assault Programs, and Riddhi Mukhopadhyay, director of the Sexual Violence Law Center in Seattle.

Marks, whose group is an umbrella organization representing sexual assault advocacy programs across the state, said Fain’s appointment continues a pattern of people accused of sexual assault not being held accountable.

That in turn sends a message to survivors that speaking out doesn’t make a difference or matter, she said.

She questioned why Senate Republicans would choose to appoint someone who is accused of sexual assault, as opposed to someone else.

“The least we can do is have an investigation to show the survivor and other survivors that we take allegations seriously,” Marks said Tuesday. “Until that is done, there are other people.… We have plenty of choices for these positions.”

Senate Republican leaders on Tuesday had a different view. At a press conference, they attacked reporters who asked questions about the groups’ letter, accusing them of poor journalism and saying it wasn’t even worth discussing.

“We put in many, many names, and the most trusted name by everyone in our caucus was Senator Fain,” said state Sen. Ann Rivers of La Center, who chairs the Senate Republican Caucus.

She added: “We just think it’s time for responsible reporting to happen where no more ink is devoted to campaign smears.”

Senate Minority Leader John Braun, R-Centralia, voiced a similar opinion, saying he viewed Faber’s rape allegation two years ago as “a political attack on a talented and distinguished public servant in the middle of a campaign.”

“It is disappointing that you are willing to drag up this and become part of that political attack,” Braun told a reporter Tuesday. “This shouldn’t be how journalism works.”

Faber has consistently said she was motivated to name Fain as her rapist in September 2018 of her own accord, independent of any political campaign. She did so on Twitter during the nomination process for Supreme Court Justice Brett Kavanaugh, who was accused of sexual assault by Christine Blasey Ford and whose confirmation hearings were closely watched by people across the nation.

Faber wrote in a text message Tuesday that she didn’t have a statement to give in response to the letter from the National Women’s Political Caucus and the other groups, but believed their letter “stands on its own.”

Members of the Washington State Redistricting Commission are allowed to claim $100 in compensation for days they work on commission business. The role is considered a part-time, mostly volunteer position — although the commission’s work product will have a profound effect on future elections, including whether districts lean Republican or Democrat, or are majority white versus including larger populations of people of color.

The letter from the groups protesting Fain’s appointment also called for him to be banned from interacting in person with commission staff and other commissioners, should he stay in the position. The letter further calls for his communications to be supervised.

Senate Republican leaders said that is wholly unnecessary and that they have no plans to try to make that happen.

Two years ago, Senate leaders were on the verge of holding an investigation into Faber’s rape allegation against Fain. The plan fell apart after Fain lost his election.

Democrats said Republicans blocked the investigation from moving forward by refusing to approve an independent investigator, a necessary first step.

Previously, Republicans on a Senate committee had joined with Democrats in unanimously voting to launch the investigation. GOP senators, led by Rivers, also had released public statements calling for Faber's allegation to be thoroughly investigated.

After Fain lost, however, Senate Republicans argued the investigation should be dropped, since he would soon be leaving the Legislature.

Faber supported the idea of a Senate inquiry, even though she had declined to report the rape to law enforcement officials in Washington, D.C.

She told The Seattle Times in 2018 that her decision was partly due to how few rape cases are prosecuted, as well as her view that a criminal conviction alone would not constitute justice.